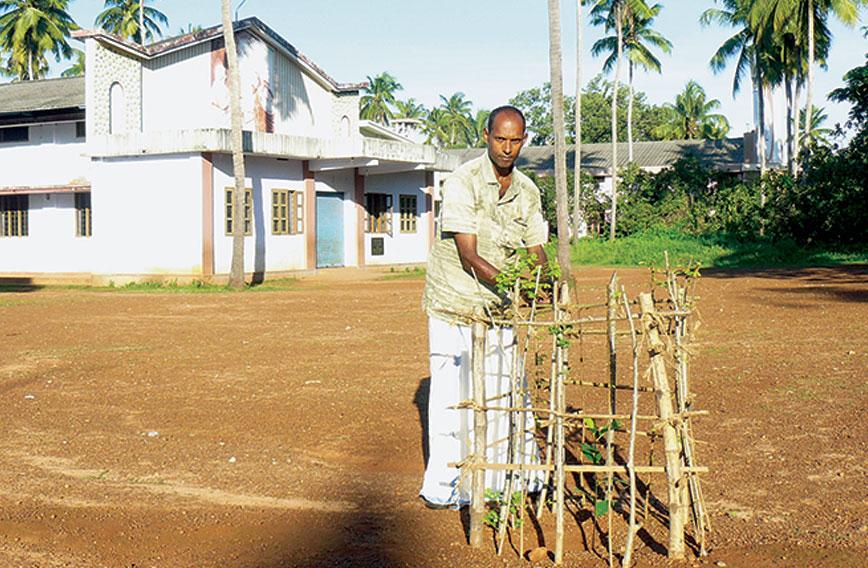 Kaittaly Raman Jayan spent 11 years working in Dubai but the jackfruit tree which had given his family food security beckoned him back to his village in Kerala’s Thrissur district. He came back to find people cutting jackfruit trees for timber.

He then started a campaign to plant jack trees. He bought himself a tempo in which he carried jack plants, a spade, sickle and a watering can. He would plant a tree wherever he found a suitable spot.

There was a time villagers used to call him crazy but now eco-clubs of various schools often invite Jayan. He also wrote a booklet on the jackfruit which is now a textbook for students in Class 8.

Villagers used to call him crazy. But now a growing number call him mashe or teacher. Kaittally Raman Jayan, 46, like the jackfruit tree he campaigns for, maintains a dignified silence whether he is ridiculed or praised.

“I don’t understand why people neglect the jackfruit tree. It has the capacity to feed the whole family. It is an excellent tree. Like the coconut, the jackfruit too is a Kalpavruksha, a wish-fulfilling tree,” says Jayan passionately.  “In fact, India should declare jackfruit as our national fruit, just as Bangladesh has done.”

Jayan was born into a poor family in the village of Avittattur, in Kerala’s Thrissur district. He was the seventh of nine sons. His father had to feed his big family with his meager earnings as a newspaper vendor.

The family’s food security came from an age-old jackfruit tree in front of their house. “The jack tree wasn’t just our saviour,” reminisces Jayan. “We had many goats. As a child I was assigned the job of cutting jack leaves to feed our goats. We literally lived under the shade of this jack tree. Just imagine how many quintals of food a single tree gives us so effortlessly.”

Memories of his childhood made Jayan very attached to the jackfruit tree. His hobby in school was to collect sprouted jack seeds and plant them here and there. The plants grew into trees and started yielding fruit. Jayan was filled with wonder. This was an exciting experience for the teenager. Noting his love for the jackfruit tree, people nicknamed him Plav Jayan  or Jack Tree Jayan, when he was studying in Class 7.

Jayan couldn’t go to college since his family didn’t have the money to finance his higher education. For a while he drifted from one job to another. Finally, he found a good job in the Gulf.

Jayan spent 11 years in Dubai. He says he had a pretty good job in a supermarket.  The money was good. He had luxuries that couldn’t be dreamt of in his village. “But a sort of discontent started building inside me. My jack trees were calling me back to my motherland,” he says in a rare display of emotion.

“In fact in my place of work they were offering me a hike in wages. But money is not everything. What is the point of earning money and then coming back home in your twilight years, old and unhealthy.”

When he returned he found people were cutting jack trees for timber, for constructing homes and so on. But nobody was planting new trees. This made Jayan very sad. He decided to rectify the situation.

The seeds of starting a campaign to plant jack trees began to grow in his mind. His small house in the village of Avittattur is just five km away from Irinjalkuda railway station. Every year, Jayan raises a large jackfruit nursery in front of his house under a thicket of coconut trees.

He looked for a job which would match his mission. Finally, he decided to distribute products like candles and soaps produced by local Kudumbashree units which are cooperatives run by women.

He bought himself a tempo with his name, Plav Jayan, inscribed on the front. It fulfills two purposes. He sells Kudumbashree products and alongside he plants jackfruit trees. Apart from soaps and candles, Jayan’s yellow tempo carries jack plants, a spade, sickle and a watering can.

As he drives down streets and lanes Jayan looks out for suitable spots to plant jack trees. If he finds one, he stops his tempo, takes out his spade, digs a pit, plants the jack, erects a fence, waters the plant and then zooms off.

If his chosen spot is in a school or church, he approaches the authorities for permission to plant. Once he gets the green signal, he plants the jack tree himself.

“On my subsequent visits, I look up my plants. If a plant shows signs of withering, I water it. If necessary I go to the nearby house and request them for a pot of water.”

Initially some of his plants were uprooted by vagrants. People used to make fun of him. “Our society has a strange inferiority complex about jackfruit. I really don’t understand why so many people look down on it. I would be mocked for carrying jack plants. People wanted to know why I didn’t plant banana trees instead.”

Seeds and schools : Strangely, Jayan popularizes only seedlings, not grafts. “If you wait for just seven years, this plant will also give you a bountiful yield, no?” he says.  Every year, he raises a nursery with a few local varieties like Muttom Varikka, Then Varikka, Thenga Varikka, Tamara Chakka, Neelathama Chakka, Singapore Varikka, Paduvalam Chakka, Pattamuttom and so on.

Eco-clubs of various schools often invite Jayan. He always takes a few jack plants with him when he accepts an invitation to an eco-club.  First, he  shows the children a documentary film of his activities.

“I tell the children, the jack tree is not only for us human beings. It gives food and shelter to birds, squirrels, monkeys and many other animals. It is a habitat for a host of small animals and birds.”  He then takes the students to the playground and helps them dig pits. The children enjoy planting the seedlings and watering them with their own hands.

There is an activity called ‘cluster study’ for high school students in Kerala. Teachers are permitted to choose books which are not part of the syllabus and encourage students to read and discuss those books.

Jayan wrote a booklet on jackfruit two years ago. He has been adding information to it with each subsequent edition. His book is one of the books selected for Class 8 students.

JACK VILLAGE: Jayan wants to convert his village Velukkara into a jackfruit paradise. ‘One house, one jack tree’ is his dream. The village has more than 1,000 houses. About half of them have a jackfruit tree thanks to Jayan.

“I prefer to plant the seedlings in these homesteads with my own hands.  This is not because I mistrust anyone. Just for my own satisfaction,” says Jayan.

Of late, institutions, clubs and groups of people request Jayan to supply them jack plants. They have been organizing meetings to sensitize people about the importance of the jackfruit for local food security. During one such programme, 500 jack plants were planted in the Thrissur Medical College campus. Even the Irinjalkuda police station has grown a herbal garden with a few jack plants.

Jayan’s family of four is slowly getting involved in his mission. Says his wife Smitha, “Initially, I used to feel embarrassed. Now I have realized the importance of what he is doing. All this sacrifice is for the development of the village.” Jayan’s son, Aditya, studies in Class 7 and his daughter Alamelu, is in Class 3. They help in the nursery and other activities.

Jayan has been receiving recognition for his selfless work. He has caught the attention of local TV channels and small magazines and he has been honoured at jackfruit festivals.

Recently, he was awarded the Vanamitra prize by Kerala’s forest department. He received a cash award of `25,000. Such recognition has also raised awareness about the importance of the jackfruit.