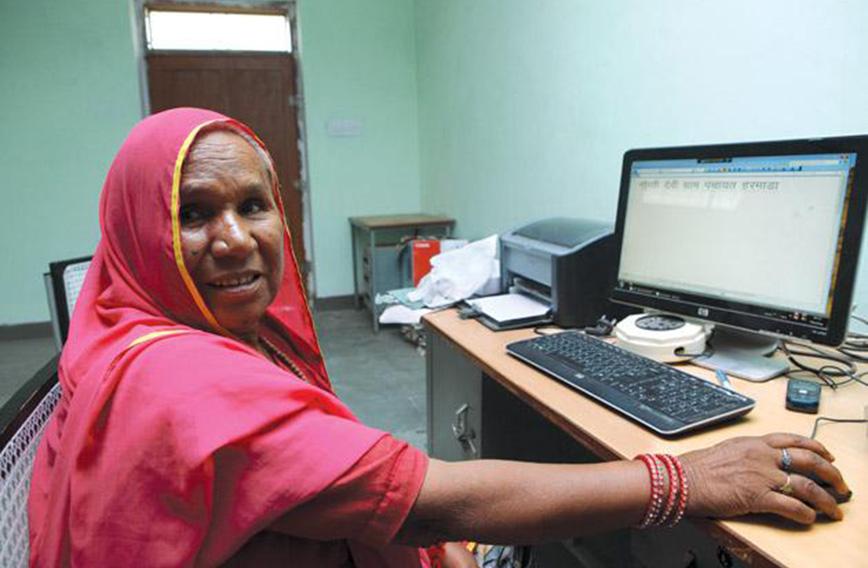 Everything about Naurti Bai is a departure from the norm. She was the Dalit sarpanch of Harmada, a Rajasthan village dominated by upper caste Jats. She is a widow but dresses in bright pinks and reds.

In 2010 when she was fighting elections to become sarpanch, all odds were stacked against her. Her rival had bribed people with alcohol and money. There were threats of rape. But she went campaigning door to door and women, across boundaries of caste and class, voted in her favour.

As sarpanch, she made sure that the funds for MGNREGA went into the right hands. The women were paid the same wages as men for their labour. Naurti’s simple act liberated many women from financial dependence. Her struggle for equal rights goes back to 1981, when she fought for equal wages for men and women, and the Supreme Court gave a historic judgment.

When Naurti was 35, she underwent literacy training. Later, she learnt to use the computer. But, she says, “My mind is the best computer in the world.”

HARMADA is about half an hour’s drive from the small town of Kishangarh, famous for its marble and the 18th century school of painting. Blocks of marble line both sides of the potholed road that leads to Harmada, a visibly derelict village, an island of poverty that sits plum in the middle of a sea of marble money.

Here, in this village, in Rajasthan, lives a remarkable woman – Naurti Bai – who has been fighting for the rights of women for over 30 years. The feisty Naurti, a Dalit from the Regar caste, is now the sarpanch, presiding over a village dominated by 400 upper caste Jat families.

Four kilometres away, far from the madding crowd, sits Naurti Bai in her spacious and newly built office. The room is bare with five big windows. A stack of durries is piled in the corner. There are two tables with computers, and a blackboard, with something about seeds and sowing methods scribbled across it in white chalk. The room can easily hold 50 to 80 people. The first thing Naurti Bai tells us is that the building was constructed in less than what was allocated in the budget. In the process, she saved more than a lakh of rupees for the village. Naurti might be a widow but she’s dressed in colourful clothes, a sign of her independence. Today, she’s wearing a pink sari with a gold border and a loose-flowing flowery petticoat; gold-coloured earrings add a glow to her face; her hands are adorned with simple patterns in black henna. In a soft, low voice, she begins telling her story.The day we arrive is also the day of the local fair. It’s Janmashtami, and there is an air of raucous festivity. If you thought that the Indian village is a place of bucolic silence, punctuated by the gentle tinkling of bicycle bells, then it’s time you revised your opinion. A packed Ferris Wheel, powered by a noisy generator spewing black smoke, circles the air. There are no bicycles or rickshaws, only small and big trucks and motorcycles. A kabaddi competition is in progress. Young men from surrounding villages wrestle each other in the soft mud bordered by pools of sewage. Villagers sit on the terraces of surrounding houses, cheering their favourites. The men in tattered vests lunge at each other; the children are crying themselves hoarse; the loudspeaker plays techno remixes of Rajasthani folk music. The lone commentator who’s standing on the sidelines of the kabaddi pit cannot help but get carried away: “Tilonia ka mela choti par chal raha hai,” he shouts, “Everybody join in!” A truck passes by, on its way to a neighbouring fair. It’s full of men in turbans and a handful of women in ghoonghats, one of whom sways her hips sensually to the beats, her midriff generously exposed.

Naurti says she was never afraid of hard work. She overcame resistance from her father’s brothers and started helping out the family, from digging mud to transporting it to the nearest town in a bullock cart. In her younger days she could dig a trench 300 feet long in one day. The wage fixed by the government was a rupee and 25 paisa for every 100 feet.

In 1981, she organised 300 women and filed a PIL in the Supreme Court over the low wages being paid for drought relief work. This was done with the help of Aruna and Bunker Roy who had just started working in the area. There was resentment amongst the women folk for the contractors paid them Rs 3 or Rs 4 rupees, even when they did the most labour-consuming jobs. The men got paid up to Rs 7, often for doing nothing more than puffing on their bidis and playing cards. The women workers struck work. In a historic judgment, the Supreme Court ruled that no worker, including those working on drought relief, could be paid less than the minimum wage. A payment below the minimum wage would amount to forced labour.

At the age of 35, Naurti underwent literacy training at the Barefoot College in Tilonia. She ran a night school for women for three years. In 1987, when Roop Kanwar was pushed onto her husband’s funeral pyre, she arrived on the scene and sat in dogged protest. The upper caste men threatened to rape and kill her, a threat she would get used to over the years. “What the Rajputs do to their women is wrong. The young widow is not in her senses. There is loud music and general confusion. Before you know it the deed is done. The police, instead of using the law, sided with the Rajputs. It made me furious.”

ELECTED AGAINST ALL ODDS

In 2010, she fought elections and became sarpanch. In line with government policy, the seat had been reserved for a woman. Her rival, Pyare Lal Taunk, sarpanch of Harmada several times over, and a liquor contractor, bankrolled three women candidates of his own. He plied the people with free alcohol, food and money. His supporters branded Naurti’s daughter-in-law a witch. There were threats of rape. Naurti stuck to her guns. She had no money, she says, but she and her son canvassed door-to-door on foot, visiting each house three to four times. Gradually the women’s vote, cutting across caste, swung towards her.

Meanwhile, she learnt to work a computer, a skill that has served her well in her new avatar. As sarpanch, one of her key jobs is to administrate NREGA funds. She makes sure that the money is spent on the right kind of construction work, and that it goes into the right hands. This simple act has liberated the local women who now don’t have to depend on their husbands. If they want to buy a sari for themselves, or toys or medicines for their children, they can do it out of their own pockets. “They have self-confidence now,” Naurti says. “They know their hard work can secure a good future for their children.”

As we talk, Naurti Bai’s phone rings incessantly. People from neighbouring villages call her up to fix appointments for meetings and to solicit advice. When she walks down the street, people line up to get petitions and applications signed. She’s like a celebrity among her adoring fans. She obliges everyone with her ‘autograph’, though not before she has scanned the piece of paper carefully. Some villagers are putting up a wall around the local school. She takes us to the site. A woman touches her feet. She scolds her loudly. She turns to me and says, “I tell everyone. I’m a labourer first, then a sarpanch. I’m one of you. Then why fall at my feet?”

As we walk towards her home where she lives with her son and grandchildren, I ask her about her trips abroad, to conferences in China, Germany and America. After all, she is a bit of a ‘celeb’ sarpanch even though she doesn’t want to be treated as one. She laughs and says she didn’t like the food in China so she survived on apples and bananas. It was her maiden trip in a plane. She was scared of the window seat so they gave her one in the aisle. Once she’d landed at the airport, she followed the pictorial signs to get to the exit. This is where she encountered ‘bijli ki sidhiyan’ (escalators) for the first time. She didn’t like America much. “They don’t care about their children and throw their parents in old people’s homes. Not like here where people wear colourful clothes and are more open to each other.”

We sit with her, the family matriarch, in her small courtyard, sipping Pavna Cola. Her daughter-in-law is making chapatis on a choolah. Two of her grandchildren are studying for bachelor’s degrees in Kishangarh. During vacations, they pick up work under NREGA. Naurti says it’s not easy to feed seven mouths. The cattle also need to be taken care of. Recently they spent Rs 7,000 on sowing. It’s difficult but Naurti Bai always tells her brood, “Go out into the world with the self-confidence that you are the best.”

As we leave, I ask her where she gets her strength. She replies without hesitation, “My parents, and Arunaji.” Then she adds, “And also my mind. My mind is the best computer in the world.” I am reminded of Chacha Chaudhary’s famous quip, that his mind runs faster than a computer. And why not. After all, Naurti Bai is the ‘chaudhury’ of her universe.