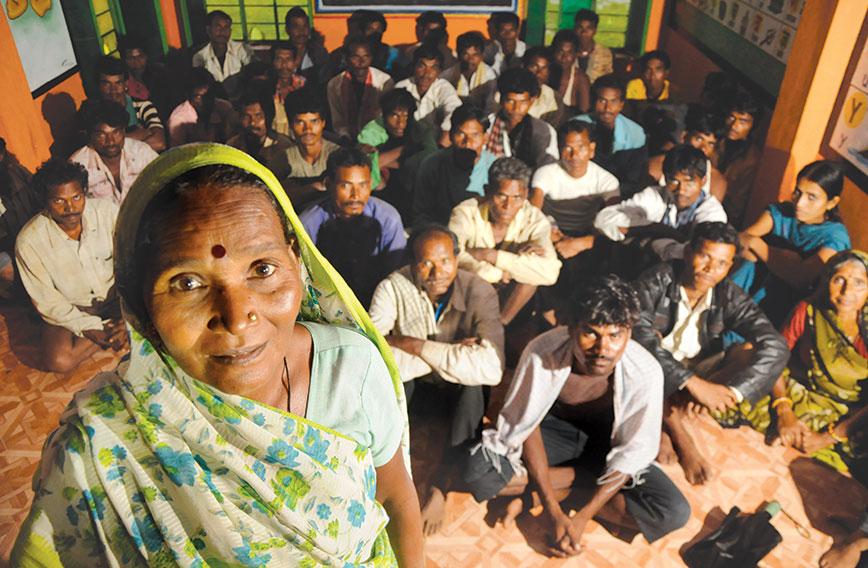 When Gyarsi Bai died in 2018, Baran district in Rajasthan lost an important local leader. She belonged to the marginalised Sahariya community, but she overcame this disadvantage to fight for the rights of Sahariyas, who lost their land in the absence of records to prove their ownership.

She symbolised the aspirations of her community and their longing for a life of justice and dignity. She fought for the right to work, the right to food and the right to know. Gyarsi worked with officials at the district and state levels to ensure that the Mahatma Gandhi National Rural Employment Guarantee Act (MGNREGA) was implemented and the Right to Information secured.

It was Charumitra Mehru and Moti Lal, two social activists with Sankalp, who recognised Gyarsi’s skill in communicating with people. They were responsible for Gyarsi’s interest and engagement in social issues. In 2002, when the Jagrut Mahila Sangathan was formed, Gyarsi was made its treasurer.

She married young and into a debt-ridden family. At a young age, she became responsible for running the family. Her activism was fuelled by the immense hardship she underwent.

In later years, she devoted herself to freeing bonded labour, unafraid to challenge the traditional centres of power.

Gyarsi Bai belongs to the Sahariya community, one of the most primitive tribal groups in Rajasthan. Mostly settled in Shahbad and Kishangarh blocks of Baran district in Rajasthan, the Sahariyas used to own a fair amount of land. But they had no records to prove their ownership. As a result, over the years, educated and influential people managed to corner land that traditionally belonged to the Sahariyas. This tribal group eventually became landless in their own homeland.

The government recognized the Sahariyas as a primitive tribal group and sanctioned entitlements and benefits for them. But the Sahariyas, living on the edge, did not know how to avail any of these schemes. They remained hopelessly poor, many of them serving as bonded labour.

Gyarsi Bai’s emergence as a grassroots leader from this bleak landscape is significant. She symbolized the aspirations of her community and their longing for a life of justice and dignity.  Gyarsi fought for the right to work, the right to food, the right to know. Most of all she is noted for her tough struggle to free poor and exploited communities from bonded labour.

Gyarsi Bai says she is 48 but she can’t be sure. She was born into a Sahariya family with a very tiny patch of land in Faldi village in Baran district.  There weren’t any schools she could go to. Her family married her off as a child to a man in Bhanvargarh village of Kishanganj block. His family was even poorer than hers. Her father-in-law had to take loans just to survive. He couldn’t pay back those loans and ended up working as a bonded labourer. In the midst of these troubles, Gyarsi’s mother-in-law died and she had to shoulder the responsibility of running the family at a tender age. Her husband started working as a farm labourer. Gyarsi supplemented the family’s earnings  whenever she could find work.

This routine grind began to change slowly. One day two social activists, Charumitra Mehru and Moti Lal, arrived in Gyarsi’s village and began to speak about how they could change their lives. Charumitra Mehru and Moti Lal were coordinators of Sankalp, a voluntary organization fighting for justice for the Sahariyas, Khairwas and other marginalized communities in Rajasthan.

“For the first time we began to dream of a better life,” recalls Gyarsi.

Charumitra was a passionate campaigner for the education of girls. She motivated Gyarsi Bai and other Sahariya women to start sending their girls to school. The government had started schools and hostels for girls but these were lying empty.

Talking to Charumitra proved to be an eye-opener for Gyarsi. She became aware of the issues surrounding struggles for justice. Sankalp was fighting for land and forest rights and for the regeneration of degraded forests. These were issues which touched a chord amongst the landless Sahariya community. Gyarsi Bai started taking a deep interest.

Sankalp found Gyarsi Bai’s ability to communicate very useful. They called her to the Shahbad block where the need to mobilize people was even greater. In fact Gyarsi’s skills were found very useful for reaching out to the Sahariyas and other impoverished communities. Gyarsi was one of them. She understood and spoke their language. More and more marginalized women were drawn to Gyarsi Bai.

Sankalp then felt the need for an organization of Sahariya, Khairwa and other deprived communities. In 2002 they helped to form the Jagrut Mahila Sangathan. Gyarsi Bai became  treasurer, Yashodha Khairwa became secretary and Kalyani Bai was chosen as chairperson.

“Our mobilization became really strong when Gyarsi Bai and Yashoda joined. But what we really learnt in the course of our struggle is that these women with their emotional strength, courage and commitment are our biggest asset,” says Moti Lal.

Gyarsi was an enthusiastic activist for the Right to Information. She understood what it meant for primitive tribal communities like hers who were not being able to access their entitlements.  She took part in several dharnas all over Rajasthan including in Beawer and Jaipur. This was also the time when the nationwide campaign for the right to work and for a rural employment guarantee law was gathering steam. Gyarsi realized the significance of an employment guarantee scheme for landless and impoverished communities like the Sahariyas. She passionately took part and joined a yatra for taking this message to as many people as possible.

When the National Rural Employment Guarantee Act (NREGA) was passed by Parliament activists like Gyarsi rejoiced. But soon they became painfully aware that it was not an easy scheme to implement. There were flaws which needed to be identified and corrected.

So Gyarsi and her colleagues put time and effort into examining the finer details of the scheme. Improper measurement, underpayment, delays in payment came to light. They networked other state level groups fighting for proper implementation of NREGA and they shared their concerns with officials at district and state level. The result was that the implementation of NREGA improved significantly.  Baran district became one of the success stories of the rural employment guarantee scheme.

During the Rajasthan drought of 2002, Gyarsi and her colleagues worked tirelessly to draw the government’s attention to the plight of the people. There was widespread hunger and malnutrition. Her campaign for food entitlements had impact. A provision for supply of free grain to primitive tribes was implemented. The Khairwas were recognized as living below the poverty line (BPL)  and so became entitled to obtaining grain at `2 per kg.

Although Gyarsi’s fight for all these issues is significant, it is her work to free bonded labour which has become most noteworthy. She began to devote herself to wiping out the scourge of bonded labour later in life, once her children had grown up. Identifying, releasing and rehabilitating bonded labour was to become the toughest phase in her life. Local influential landlords turned hostile. People who had earlier been sympathetic to her movement now became antagonistic.

Her experience helped her. As an active participant in a movement to ensure minimum wages to workers she had travelled to dozens of villages in a truck. During the course of this campaign she came across people who had been forced into slavery.

The initial phase of her work was relatively easy. Gyarsi and her colleagues were simply demanding the release and rehabilitation of a few workers in a village. The local administration found these demands easy to comply with and ordered the workers released. But when Gyarsi asked for the release of many more workers in several villages, the administration got cold feet. They felt they would not be able to cope with the hostility of landowners.

At this critical juncture Gyarsi’s community came to her assistance. The relationship she and her colleagues had built with the Sahariyas was now reciprocated. Traditionally, the Sahariyas had never spoken openly about their exploitation. They had always maintained silence. But now they took the decision to speak up. They accompanied Gyarsi to distant hamlets and spoke at public meetings clearly and openly about their exploitation. They gathered as much information as they could about bonded labour. So when landowners questioned their campaign and tried to quiz them, the Sahariyas could answer back. At public meetings Gyarsi spoke with confidence. “We ourselves explained everything to the people, including the landlords,” she says.

When information was sought about bonded labour in Rajasthan, it was Gyarsi and her colleagues who could provide it. The state administration had little option but to acknowledge the presence of bonded labour in several villages and take action. A rehabilitation package is being implemented.

Gyarsi is already a proud grandmother and owns 10 bighas of farmland. As a result of the growing mobilisation of the Sahariyas and other weaker sections, the government programme for distribution of land among Sahariyas has picked up and Gyarsi’s family is one such beneficiary. Earlier hostels constructed for Sahariya girls in school used to be empty. Now they are asking for more hostels since they need more space for all the girls who are going to school.