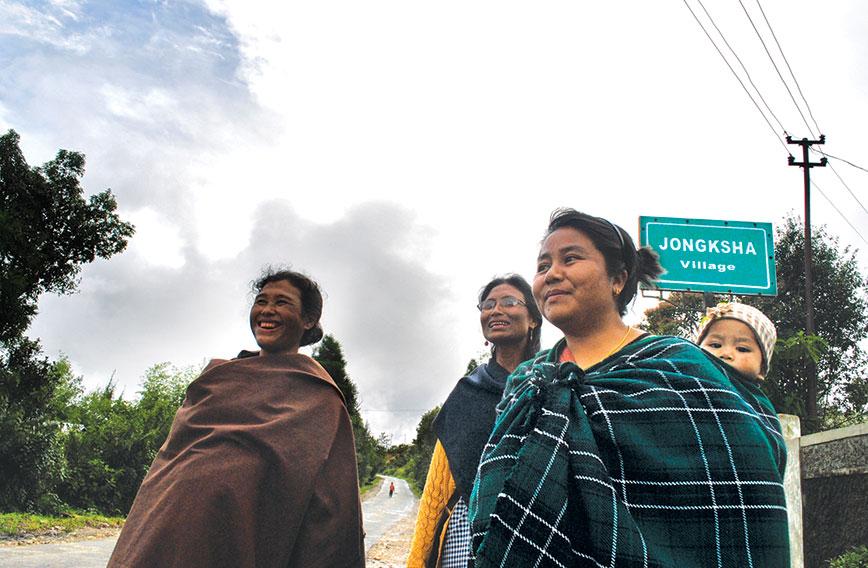 When Fatima Mynsong, Acquiline Songthiang and Matilda Suting came to Civil Society’s Hall of Fame, they sang an anti-corruption song. The energy in the room was electric. They pursued social justice with the same enthusiasm in Jongksha in Meghalaya.

Fatima was the community coordinator of the Mahatma Gandhi National Rural Employment Guarantee Scheme (MGNREGS) and she found that the money for payment of wages had been fraudulently withdrawn. Her enquiry did not go down well with the male village heads. The three women were ostracised and their rations were stopped.

Though they were afraid of challenging senior functionaries in their village, they knew they were on the right path because they were fighting for what was promised to them. The Right to Information Act was a crucial weapon in their struggle. It gave them a voice. Before, only men had the right to speak in the village ‘dorbar’. But the trio fought hard to be heard.

Kong Fatima Mynsong is a teacher. Kong Acquiline Songthiang is also a teacher. Kong Matilda Suting is a housewife. These three women and a village named Jongksha in Meghalaya have a remarkably gutsy story to tell of countering corruption.

It all began in 2008 when the implementation of the NREGS (National Rural Employment Guarantee Scheme) had begun in Jongksha. The scheme entitled each household in the village up to 100 days of work each year. Any member of the household who  is above 18 years of age can get work using the job card issued to each household. Villagers here refer to the NREGS work as ‘hynniewphew’ meaning ‘70’, the reason being that the daily wage under this scheme had been fixed at that time at `70.

Kong Fatima was the community coordinator of the NREGS in the village. As soon as the implementation process began, Fatima found that someone had fraudulently withdrawn money for the purchase of materials and payment of wages by forging her signature. This made her question the secretary of the VEC (Village Executive Committee) but all she heard from the secretary was, “It is none of your business to know. The village heads know what they’re doing and what they should do, you have no say!”

Kong Acquiline, who also had a role to play in the implementation process, had to face a similar fate. These, however, were just cracks that were starting to surface. The three women first tried to solve the problem through negotiation. They thought that by talking to the people responsible for the corruption the dispute would be resolved and the workers would be paid their rightful dues.

However, all their pleas fell on deaf ears. In the meantime, some people of the village who figured out that their complaint wasn’t without basis and that there was indeed some misappropriation of funds, started supporting the three women. On finding such support, and after having weighed the pros and cons, the women zeroed in on one last resort – using the Right to Information (RTI) Act, not just to expose but also to counter corruption. It was their first big leap.

The RTI application filed by the three women proved to be a segregation tool which divided the village into two groups. The locals describe one group as the ‘RTI Party’ (group supporting the RTI filed) and the other as the ‘Village Party’ (consisting of village heads and other supporters that were against the RTI Party).

The ever-smiling faces of these women were never troubled even though a series of hurdles came in their way.  Their rations for rice, sugar and kerosene were stopped, they faced ostracism from the village and were even physically assaulted. However, all of these attempts to refrain them from countering corruption proved futile. The search for justice continued. Slowly but steadily they moved to higher levels of the administration. They started filing their complaint to the Block Development Officer (BDO), then the District Rural Development Authority (DRDA), then the State’s Chief Information Commissioner (CIC) and finally the Deputy Commissioner (DC). It is at the DC’s level that the final verdict can be given. The DC’s official machinery has slowly started to chug and the chargesheet against the Chairman and Secretary of  the Village Employment Council has been filed.

“Our victory is nearing,” exclaims a local resident when asked about how their fight for justice has taken shape. As for the three women RTI users, one can see their passion for what they’re doing in the way they remember past hearing dates, dates of filing appeals and other important dates, in much the same way as they remember the dates on which their children were born.

These women and their supporters don’t know their way through the system. They are merely ordinary citizens who are well aware of their rights and the need to preserve democracy. Most of their supporters are not literate but definitely intelligent.

The efforts of Fatima, Acquiline and Matilda remind us that we are our own shield and sword against those who try to subvert democracy.

It has been three years now and the village as a whole hasn’t had any real benefit out of the NREGS and the villagers are longing for it to start right away again because they know the wages have been increased from `70 to `80 and now `100. This time around, they refer to it as ‘ shi spa’ meaning ‘100’ -- that is way better in all aspects than the previous ‘hynniewphew.’

The RTI application has yielded good results because of the extensive public support that the women had gathered much before they filed the first RTI application to pressurize the authorities and to ensure that justice is done to their pleas.

In fact, the women’s fight has, to some extent, brought about some change in the prevailing social system too. Meghalaya’s is a matrilineal society. However, earlier women were not allowed to speak in the ‘Dorbar’. Only men had the right to such things. But in this case, they had to be given a chance to speak and address the ‘Dorbar’ on what they claimed to know.

Recalling this, Acquiline says,” Even if they don’t give us the microphone to speak and address the people, we make sure we get the microphone… and now, after seeing us speak, almost everybody wants to come up and speak about the injustice done to them on the microphone.”

The two teachers and a housewife-labourer are indeed bravely leading by example!