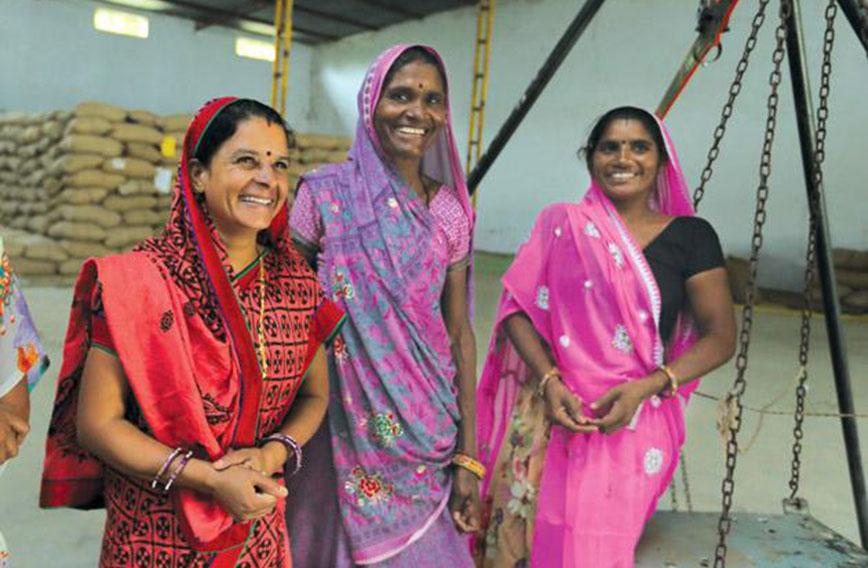 The Soya Project: Savitri, Prem and Manni of the Samriddhi Mahila Crop Producers' Company in their warehouse in Bundi

“I am the chairperson of my company,” said Savitri Gaur to loud applause from the large Delhi audience gathered to celebrate the Civil Society Hall of Fame.

Weeks earlier we had visited her in Bundi, Rajasthan, where, standing in a warehouse, cell phone clutched in her hand, she said to us: “We were selling on adverse terms and buying from the market at a premium. So we thought to ourselves, why not set up our own company and save on the margins that traders and shopkeepers make.”

Empowerment of Bundi’s women farmers began with scientific ways of cultivating soya and then marketing the produce directly through the Samriddhi Mahila Crop Producers’ Company.

“We didn’t even know what a Self-Help Group was, let alone a company. Our lives have changed in so many ways. We didn’t know to express ourselves,” said Gaur about the change they had experienced.

They were helped by Padam Jain and Himanshu Bains, two activists from Srijan, an NGO based in Delhi. It took six years, but change came.

In 2008, two earnest young men set out to boost soya bean yields in the semi-arid region of Bundi in Rajasthan. Rainfall there is meagre and the soil lacks nutrients. But there are ready buyers for soya bean and the farmers were already growing it in small quantities among their other crops. Bumping up production held out the prospect of soya bean being the driver of better incomes in the villages of Bundi district infamous for bonded labour and poverty.

Neither Padam Jain, 38, nor Himanshu Bais, 32, had extensive knowledge of scientific agricultural practices. Well-informed opinion was also against their mission. But they plunged in and six years later they are heroes to thousands of famers who have experienced a social and economic transformation.

Soya bean yields have galloped thanks to 14 agricultural best practices put together by Himanshu and Padam.  Women farmers have set up a producer company of which they are the only shareholders. The company has a licence to buy grains directly from farmers and sell them further. It runs a store and provides seeds and inputs at fair prices. A warehouse makes arbitrage possible – when prices are down grains can be stocked and sold later. There is also access to bank finance.

Padam and Himanshu work for SRIJAN or Self-Reliant Initiatives through Joint Action, which is based in New Delhi. The changes they have brought about have upturned old equations in Bundi district. The unfair terms on which farmers were compelled to sell their produce to the APMC (Agricultural Produce Marketing Committee) traders at the Bundi wholesale market have also ended.

Much of the credit for the initiative’s success belongs to the women farmers. They seized the opportunity to empower themselves. They now have a greater say in their families and cut into the leadership role traditionally played by the men. Savitri Gaur is the chairperson of the Samriddhi Mahila Crop Producers’ Co. Ltd. She is at ease in her company’s warehouse surrounded by gunny bags of grain, some of them with labels saying they are pledged to ICICI Bank.

“We were selling on adverse terms and buying things from the market at a premium. So we thought to ourselves why not set up our own company and save on the margins that traders and shopkeepers make,” she says.

But this is Savitri talking now, with her cell phone clutched in her hand. She didn’t have any of this confidence some years ago.

“We didn’t know what a Self-Help Group (SHG) was let alone a company. Our lives have changed in so many ways. We didn’t know to express ourselves. We used to cover our faces and wouldn’t dream of talking to a stranger the way we are talking to you now.”

The company has 2,482 women as shareholders who have each put in Rs 1,000 as investment. The governing board has 10 members – among them are Prem Bai and Manni Bai who are with Savitri as she talks to us.

It has all been part of a process that began with talking to the women. The conversations would be about better farming methods, benefits from government schemes and setting up of SHGs.

“These people would come to us and tell us to create SHGs and save our money. We were wary because so many finance companies take our money on false promises. But these people said we could manage our own money. That is how we learnt to save and lend to each other”, recalls Savitri.

The SHGs multiplied (there are now 457) and came together in the Samriddhi Mahila Mandal Trust where two women represent each SHG. The producer company was the next step.

The women have played a crucial role in convincing the men to adopt the farming practices propagated by Padam and Himanshu.  The increase in yields has, of course, been most important. Production has gone up from 1.5 quintal a bigha,  (half an acre) to three and even four quintals. Interestingly this increase has been not just for soya bean, but wheat and mustard as well.

Padam and Himanshu worked to a strategy. They used 50 plots, which they call ‘commander’ plots, to demonstrate that improvements were possible. The farmers who benefited went on to become evangelists for the new farming techniques.

Parmanand of Loharpura village was one of the earliest converts.  “Before they came to me in 2009, I used to farm without any real method. But they showed me how to space out the seeds, put nutrients in the soil, water the plants at the correct time even if it meant buying water from a farmer with a tubewell. They also taught me when and how to use pesticides.”

“When my harvest increased, I had no hesitation in telling other farmers about the techniques I had been taught,” says Parmanand.

He remembers that it all began with the SRIJAN team meeting the women and talking to them about what could be achieved. The women would return home with accounts of what happened at the meetings, he remembers.

Another farmer, Ram Rattan Meena, has taken all of five years to switch. His wife, too, would go to the meetings and became a member of an SHG. But he wasn’t convinced. Having adopted the new methods, the yields on his land have gone up. He used the warehouse to store his wheat to get a better price for it. In the interim he took a loan from the bank against the stock.

The successes in the field have been crowned by empowering the farmers to go to market on their own terms. Pinky Pankaj, at whose home we meet a large number of women and have a traditional Rajasthani meal on the floor, says at the Bundi Mandi or wholesale market, farmers used to be forced to sell at prices arbitrarily decided by traders and the arhityas or commission agents. Decisions on quality too would be arbitrary.

Now the producer company buys the grain at local centres and decisions on quality are based on objective criteria. The price is correct. Prices of produce in the mandi and at collection centres, set up by SRIJAN, are pasted on village walls.

“Earlier we had to sell once we reached the Bundi Mandi,” points out Pinky. “And at whatever price the traders had decided on among themselves. Now we have a fairer, more transparent system and also the option of keeping the grain in the warehouse.”

Padam is from Bundi. He has a Masters in irrigation and he worked with the Sadguru Foundation, an NGO well-known for its work in water and soil conservation. He moved on to ASA (Action for Social Advancement) to work in the tribal part of Jhabua district and then joined BAIF, another NGO, respected for its work in agriculture. “I finally joined SRIJAN in 2003. I really like it here,” he says.

Himanshu is from the Chhindwara district of Madhya Pradesh. He studied at the Xavier Institute of Development Action and Studies in Jabalpur, got a job with CAPART and worked in Barmer with SURE (Society to Uplift Rural Poverty). He got an internship with the Ministry of Rural Development but got bored writing project proposals so he quit and joined SRIJAN in 2003.

At that time SRIJAN was doing a smallish dairy project in the Tonk district of Rajasthan. Himanshu and Padam were sent there to scale it up. But they noticed the opportunity in soya bean in the neighbouring Bundi district. The crop had ready buyers. There were three soya- crushing mills. An American multinational, Bunge India Pvt. Ltd. was interested. Rainfall was a paltry 450 mm but enough for soya bean to survive. Also, soya is a good crop because it generates nitrogen and improves soil health.

The two men approached Dr PS Bhatnagar, a retired scientist from the National Soya Bean Research Centre for help. But he was sceptical since neither Padam nor Himanshu are agricultural scientists. Finally, they approached PRADAN (Professional Assistance for Development Action), a well-known NGO that works on rural livelihoods and agriculture. They attended workshops and came up with 14 best practices for soya bean cultivation.

Previously farmers would broadcast soya bean seeds on their fields. “But since rainfall is scarce it is important to retain moisture in the soil: that means levelling the land, deep ploughing and furrowing fields at appropriate stages. So we trained tractor owners as well,” says Padam.

“At the time of ploughing and pod filling, irrigation is very essential. We undertook soil and water conservation. We enabled farmers who did not have any water source to buy water from farmers who had wells.” They put burrows and seed grills, promoted by the agricultural department, to good use. Application of gypsum helped improve the soil.

Padam and Himanshu have also brought down the price of seeds. They got women farmers to learn how to produce seeds scientifically from foundation seeds. The seeds are certified so the women can sell them in markets.

SRIJAN has, in fact, exceeded its target of reaching 10,000 farmers. They now work with 15,000 farmers mostly women organised into SHGs. The SHGs have been linked to the Development Cooperative Bank and so far have taken credit amounting to Rs 3 crore.