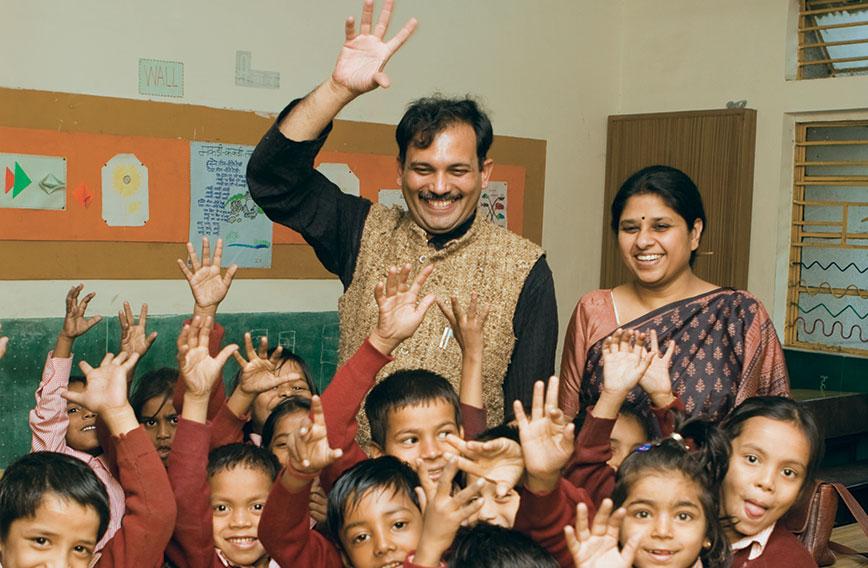 School buildings mostly end up being either boring or daunting. But what if they could be designed to be attractive to children and make learning enjoyable?

To this end, Kabir and Preeti Vajpeyi, both architects, devised BaLa or Building As Learning Aid. Since 1998, working through their design firm, Vinyas, they have taken BaLa to state governments to enliven public schools and make infrastructure part of the learning process. More than 200,000 schools have been reached.

In addition to schools, they have been working on redesigning anganwadis which are in particularly bad shape though they play a key role in promoting child health and early learning.

It was in 1992 that Kabir began working as an architect with the Lok Jumbish programme in Rajasthan. The challenge for him as an architect was to redesign dilapidated village schools without changing existing structures. The budget was small and he was expected to stay within it so as to be relevant to a government school.

Some of the innovations are simple: put numerals in grills, alphabets on the floor, angles with doors. A coat of bright paint adds to a school’s appeal. Lowering a window brightens up a classroom.

But these are not just architects dishing out designs. The success of BaLa is in its spirit of inventiveness. It requires the involvement of teachers and students. For instance, the idea of shaping grills into numerals came from a teacher saying that children were confused between numerals in Hindi and English.

Transforming anganwadis and motivating employees on a significant scale will be a yet more challenging task.

Civil Society has tracked Kabir and Preeti Vajpeyi's work over the years. Below is a piece that appeared in the edition of September-October 2010. Read on.

A few thousand schools in India have undergone a quiet makeover in the past five years. Their exteriors have been repainted in cheerful colours, toilets improved and classrooms made more airy. Playgrounds have been redeveloped – in one case by using discarded tyres.

To make learning less daunting, the walls in these schools are covered with basic lessons in math, geography and general science. Doors are being used as protractors to teach angles. Window grills have taken the shapes of letters of the alphabets.

All this has been possible thanks to BaLA or Building as Learning Aid, an inspirational effort by Kabir Vajpeyi and his wife, Preeti, who are both architects and lead an outfit in Delhi called Vinyas.

BaLA is based on improving the physical parameters of the learning environment. If there are playgrounds and toilets, children tend to go to school. If the teaching comes off the walls and floors instead of being through books, more tends to get learnt.

BaLA is an effort to see the world as a child does. It relies on open spaces, greenery, surfaces on which to doodle and scribble, contraptions to learn from.

Kabir’s involvement with education began with the Lok Jumbish programme in Rajasthan. He was among architects chosen to innovate with existing school buildings in rural areas. The challenge was to repair and renovate structures creatively with a budget of Rs 25,000.

After Lok Jumbish, Kabir and Preeti and the team they work with at Vinyas put together some 100 odd ideas which schools elsewhere in country could implement. This was BaLA and it became a book brought out with the help of the World Bank.

Civil Society first covered BaLA four years ago. In this interview we catch up Kabir and Preeti to find out how the BaLA model has spread.

It has been more than a decade since BaLA as a concept originated. What has been its acceptance and spread since then?

There has been acceptance of BaLA in Gujarat, Himachal Pradesh and in Delhi in schools under the New Delhi Municipal Corporation (NDMC). In addition you will find varying interest levels in BaLA in Madhya Pradesh, Chhattisgarh, West Bengal, Tamil Nadu and Karnataka.

It is difficult to say the actual number of schools in which BaLA ideas have been adopted, but there must be a few thousand across the country. Of course Rajasthan was where it all began under the Lok Jumbish programme though at that time it was just taking shape and it didn’t go under the name of BaLA.

BaLA has served as an inspiration, prompting people to come up with their own ideas. Innovation, flexibility and local ownership are exactly what we seek. Our model is not based on replication.

Recently, in October 2009, after a workshop in West Bengal, an anonymous participant sent an SMS to us – “I think BaLA is neither yours now nor mine. It is perhaps OURS!” We later identified him to be a panchayat office functionary from Bankura.

How does the idea come to be adopted? What are the points of entry?

In Gujarat, the Education Secretary championed BaLA. He picked up a copy of our book at a Vigyan Bhawan event in January 2006 and read it through on his flight back to Gandhinagar. He decided to develop ‘Dream Schools’ for Gujarat thereafter – by using BaLA ideas. But on realising that words like ‘dream’ don’t work in the government, he changed the name to ‘Model Schools’. He asked his SSA state office to get us on board.

The SSA office had learnt about us at a workshop we had held in Pune and were anyway moving towards us. They were very thorough. They applied whatever understanding they had of BaLA in four schools in Kutch. They then took the  feedback of the children and the community. It was only when they were convinced that they invited us to do an orientation-cum-design workshop for all their 250 engineers in the state at a place called Mandvi.

It took a year, but sanction was given for Rs 2.5 lakhs per school for 100 schools in Gujarat. Now more than 700 schools are covered, across all districts and blocks.

In Himachal Pradesh, a copy of the BaLA book happened to be passed on to the young State Project Director of the SSA in the state. He was already thinking about making the schools in his state colourful by painting them. He went through the book overnight and called us the next morning, saying: “I want to do this in Himachal. How do we move forward? When can we meet?”

He held a workshop with us in Shimla. District officials, principals, engineers and architects were present. When questions were raised about where the money would come from, he declared that he already had a sanction from the Government of India of Rs 25,000 per school for 1,200 schools. In less than 50 days, he had got this money budgeted and sanctioned.

The workshop must have had an impact. Several districts in Himachal took up BaLA. Solan is one very good example with more than100 schools adopting it.

In the New Delhi Municipal Corporation it was the Chairperson and Director Education who drove the implementation of BaLA. They got all their departments to buy into the idea. In March 2007, the Planning Commission provided Rs 2 lakhs per school for the 925 schools in Delhi.

What are the processes of working with government, of finding acceptance and so on?

Once the Ministry of Human Resource Development (MHRD) in Delhi was clear about BaLA as a concept it had no hesitation in asking the states to take it on immediately – at their own initiative. It was the ministry which suggested that we do a book which would serve as an introduction for administrators, planners, headmasters, engineers and architects. The book finally came out in Hindi and English in 2005 with the support of the World Bank.

The MHRD distributed the book across states in various forums. We noticed a very senior bureaucrat, (who had been very cool to BaLA initially) quietly carrying about 15 copies of the book from the  event at Vigyan Bhawan. He later told us that, barring two copies which he kept for his office use and personal collection, he distributed the rest.

Our involvement with Lok Jumbish proved to be important. The DPEP that later led to the SSA were both born out of learning from Lok Jumbish.

We believe the power of the idea, the prodding of the Rajiv Gandhi Foundation, the support of the MHRD and the book on BaLA along with coming up of the SSA across states with an integrated approach to elementary education – all helped in creating the right environment for initial acceptance.

How do you encourage innovation under BaLA?

Innovation is a need and not a by-product. Frankly, it is ancient wisdom that we have only now come to understand and appreciate. We have employed that wisdom in disseminating BaLA through the government system.

For centuries in our subcontinent, building design and construction practices had a process that allowed each stakeholder to play a creative role. This was true from the shilpi (architect) to the artisan. It not only reinforced the stake but also created ownership in the work. Thus, craftsmanship was ensured in the work at the most minute level.

If BaLA has to go to such a large number of schools, there is no single entity that can control design, construction and supervision. But then BaLA is also about a certain quality and sensitivity. So, the best course of action is to provide a frame of the essential ingredients of BaLA  within which each stakeholder has the scope to innovate.

BaLA is about being child-friendly, fun-oriented, using local resources and so on. Within this frame the administrator gets the freedom to innovate with management and monitoring systems. The engineer gets the freedom to improvise and adapt or  develop a new idea. An artisan who is making a BaLA element with a new refined process of construction is given credit for that improvement. A teacher has the space to come up with a new use for a learning aid. All innovations get our support in further refining them. But there is tremendous ownership at all levels.

An engineer once told us, “We make buildings worth  crores of rupees in our district, but somehow do not want to show them to anybody. Yet we want everyone to see a BaLA school even though we may have only improvised with the structure for a few thousand rupees.”

This is ownership. Each school with BaLA is different –  in terms of choice of ideas and how they are made or used. It is because of this that our initial list of BaLA ideas in 2001 has doubled. It is not a question of one school being better than another, but each being unique.