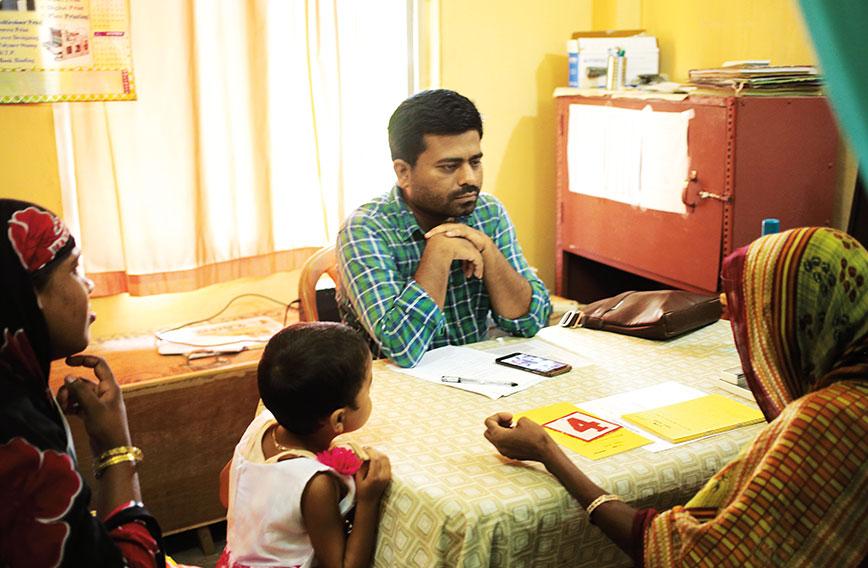 Dr Nilesh Mohite sees a patient at the Ant camp

More than 150 million people suffer from some form of mental illness in India, but there are just 4,500 psychiatrists in the country — and almost all of them are in cities, running expensive clinics. How then should psychiatry be practised in a country like ours?

Dr Nilesh Mohite believes the psychiatrist needs to go to the patient. He has set an example by relocating from Mumbai to remote villages of Assam. Here he works with ANT or the Action Northeast Trust, whose founder, Dr Sunil Kaul, is a general physician.

Dr Kaul was already running a mental health camp at ANT’s campus in the Chirang district when Dr Mohite came along and since then there has been much progress.

The demand is huge as can be seen on the day of a camp at ANT’s campus in Kokrajhar. Five or six hundred people pour in. In what seems an impossible feat, they are all attended to either by way of a consultation or by dispensing medicines in continuation of their therapy. It is a whirlwind of activity which begins early in the morning. But this is how a psychiatrist in India has to function to reach the people who need attention, but do not even know what mental illness is.

ANT charges a patient just `300, which includes medicines. It is a sustainable model which it is replicating at 10 other camps.

It is very early in the morning on the campus of the Action Northeast Trust or Ant, the lovely acronym by which it is known. We are somewhere in the strife-torn Chirang district of Lower Assam, close to the border with Bhutan. This is where the Bodos have been asking for a separate state.

The Ant campus usually comes alive early. But at 5 am it seems we are up earlier than early in our eagerness to see what happens at a monthly mental health camp that Ant has been holding for 10 years.

The camp begins at 10 am, but people are known to begin arriving much in advance because  as many as 500 or 600 patients turn up and the big hall where they converge gets really crowded. They come on foot, on cycles, in three-wheelers and in the odd car. They are young and old and accompanied by families. Some belong to very nearby villages and there are others who come from 50 km or 100 km away, switching buses and walking the last bits of the distance.

The Ant camp is just about the only place in these remote parts of Assam that someone with a mental health issue can hope to get attention and medicines. One could go to the Tezpur Mental Health Hospital, but that would be a stretch in more ways than one for someone with little money and a fear of big institutions. The Ant campus is more accessible and friendly and the fee of Rs 300, which includes medicines, makes the treatment affordable.

By the time the camp is set to begin, it seems some 300 people have turned up, almost all of them holding yellow cards which means they are registered patients.

They make up a sizeable number, though not the 500 or 600 we were told were likely to come, and there is a rush as the files of patients are fished out of rows of cardboard boxes lined up on the floor of the central hall. Once fees are paid and tokens with large numbers printed  on them are in hand,  it is time to wait in queue to see one of four doctors. There are cases of schizophrenia, addiction, epilepsy and depression.

Ant’s founder, Dr Sunil Kaul, is a general physician who once served in the Indian Army. He set up Ant in 1990 in this remote part of Assam to contribute to development here. A weaving unit at Ant gives tribal women employment and from their efforts has come about a brand of clothing called Aagor. It has generated wages of more than Rs 2 crore.

Ant has some community health programmes as well, but mental illnesses were way off its radar till 2000, when an NGO called Ashadeep came along and asked to use the Ant campus for a mental health camp because people in the area were in need of attention. 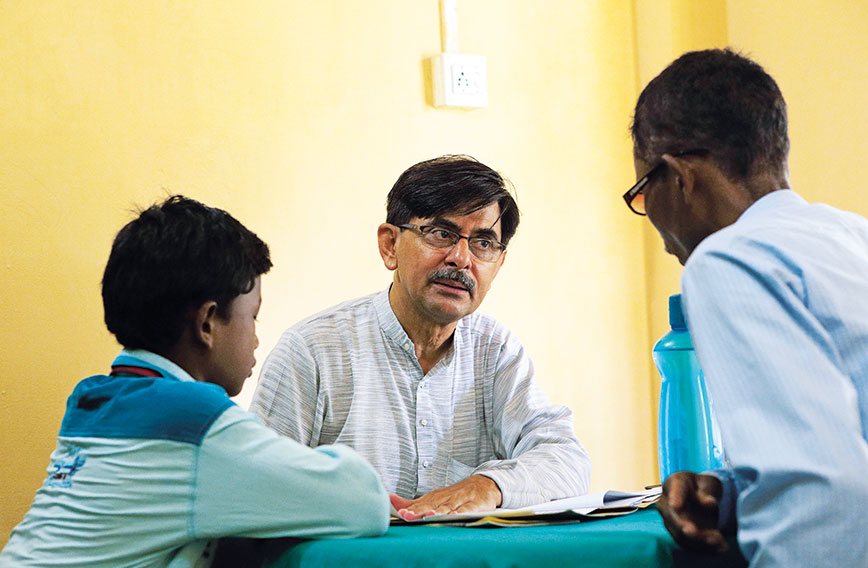 Dr Sunil Kaul with a patient

Dr Kaul agreed and the monthly camp attracted patients. Over time, however, Ashadeep withdrew, perhaps because it had run out of funding. Nevertheless, the patients continued coming and Dr Kaul was faced with the dilemma of either turning them away or assuming the full responsibility of holding the camp and giving them whatever treatment was possible.

He chose the latter, rolling up his sleeves to deal with psychiatric cases. He was helped by two other general physicians, Dr Debnath and Dr Mintumoni Sarma. It was difficult to find psychiatrists though the  Tezpur Mental Health College had 20  on its staff and there were others graduating from there, but none of them wanted to come to the violence-prone Chirang district, nor did they see themselves treating poor patients in a camp. The odd psychiatrist who might have been willing to come wanted more money than Ant could afford.

A Maharashtrian, with his parents in Mumbai, Dr Mohite chose to stay on in Assam and give back to the state, where he could see psychiatrists like himself were needed. It wasn’t out of character for him, because he had always had a different perception of what a doctor’s role should be.

After acquiring his MBBS degree, he had taken time off to introspect on what he should do as a doctor. Using medicine to get rich didn’t interest him. As he looked around, he discovered Dr Abhay Bang and Dr Rani Bang in Gadchiroli and spent time in their fellowship programme. He then decided to become a psychiatrist and the common entrance exam brought admission to the Tezpur college.

Ant and its public-spirited environment with the energetic and well-meaning Dr Kaul at the helm was just the place for him. He was ready to work for Ant for Rs 10,000 a month because he believed that psychiatry in India needed to be redefined to serve millions of poor people who have mental  problems but never get to see a psychiatrist.

According to the National Mental Health Survey in 2016, about 11 percent of the Indian population or about 150 million people suffer from mental illnesses. For them there are just 4,500 psychiatrists. Most of them are city-based and it is costly to consult them.  There are state-run mental hospitals like the one at Tezpur, but they are at a great distance from patients. It is daunting to enter such institutions and almost impossible to relocate for the period of treatment. A new approach was needed, Dr Mohite felt, in which psychiatrists could go to patients who needed them. 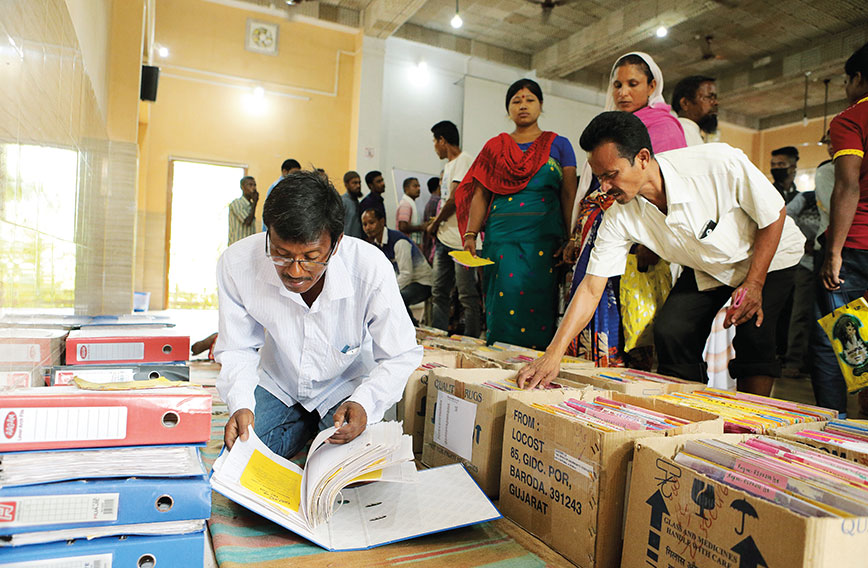 Patients' records are fished out of files

Just 32 years old, Dr Mohite has an intense but collegiate manner about him. He wears a stubble and on the days we spent with him, first in Tezpur and then at Rowmari village in Chirang district, where Ant is located, he was invariably in jeans with a scruffy shirt and a bag slung across his chest. He could, at first sight, pass for a student, but as he gets talking it is clear that he is purposeful and insightful.

We ask him if it is possible at all to seriously treat psychiatric patients in such a flood as at the Ant camp. Dr Mohite explains that in the Indian situation, where patients far outnumber psychiatrists, there is no other way except to create an alternative model. The Ant camp has ways of flagging patients according to the attention they should get. There are patients who are doing well and only need to collect their medicines every month. Then there are those who need to be reviewed by a general physician. A much smaller number, among them new patients, requires a psychiatrist to interact closely with them.

The Ant camp is an important achievement because the systems developed here can be replicated all over Assam. Many more camps and sub-centres will have to be opened if a larger number of patients are to be served.

“We have developed a self-sustaining model in Assam by charging Rs 300 per patient, but we do realise that we are doing this in one corner of Assam. We perhaps end up serving four districts. But there are so many more districts," says Dr Mohite.

Getting to patients in these areas will mean creating facilities and training local people and persuading the closest psychiatrist to attend a facility at least once a month while Dr Mohite himself can provide overall supervision.

A programme called MITA or Mental Illness Treatment in Assam has been devised with Ant to give this initiative shape. Mita also means friend in Assamese. 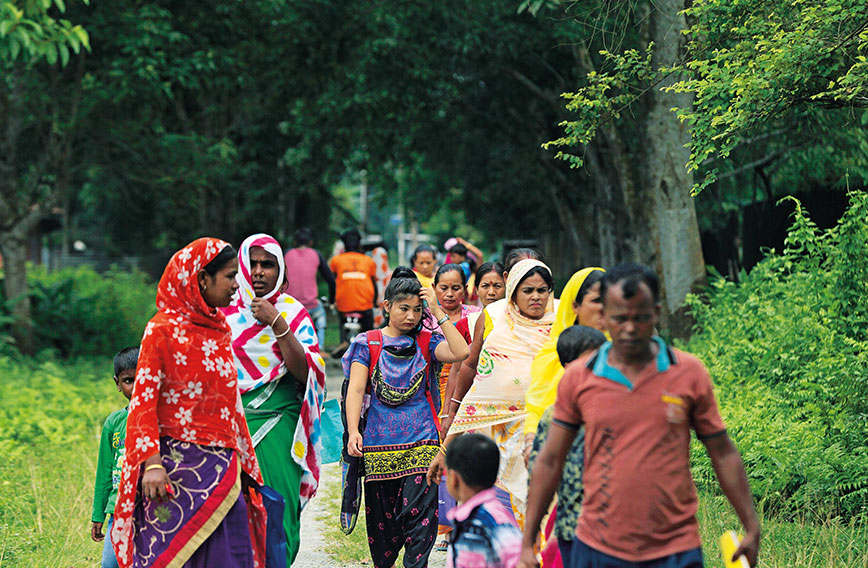 From early morning people begin coming to the camp

Another centre has been opened by Ant in Dhimaji district, which is in a remote corner of Assam on the border with Arunachal Pradesh, 800 km away. At the first camp in Dhimaji, 100 patients came for treatment. Working with a local NGO, Dr Mohite has trained 20 people to serve as support staff by visiting patients’ homes and spreading awareness.

He says similar centres are planned at 17 other locations in Assam. Ten of these will be through Ant and seven through Parivartan, an NGO founded by the late Dr Narendra Dabolkhar and Dr Shaila Dabolkhar in Maharashtra. Parivartan has been working in mental health and has had a presence in Assam since 2011.

“Dhimaji district would have about 70,000 patients, just going by the statistics for mental health problems in India, and in fact, the number could be higher,” says Dr Mohite. “Before we started a centre there it took 13 to 14 hours to take a patient to the Tezpur Mental Health College for treatment.”

Patients can be aggressive and disturbed and very often get refused public transport. A car has to be hired and they have to be accompanied by three or four family members. In Tezpur there is the problem of where to stay because hotels turn them down. At the Tezpur Mental Health College even if one registers at 9.30 am one may not get to meet a psychiatrist before 4 pm. Families end up spending Rs 20,000 or more on just one visit. 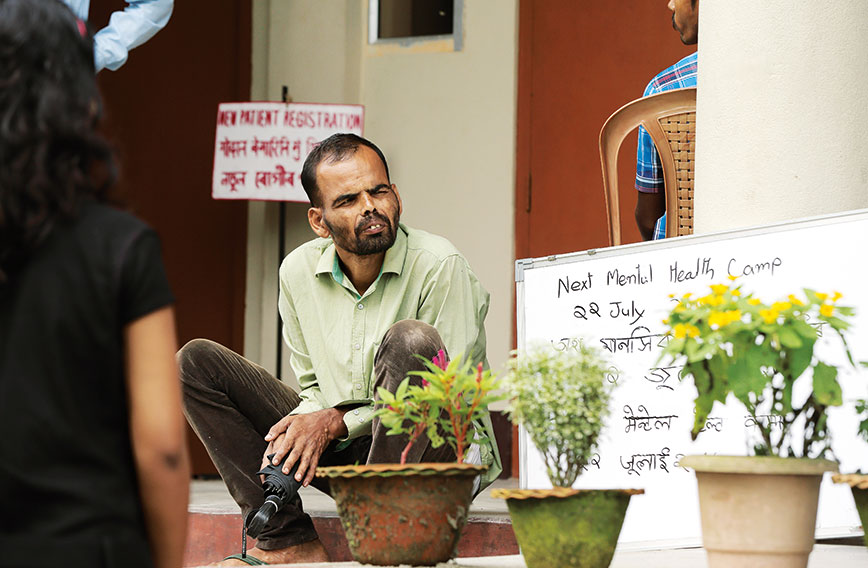 It can be a long wait for patients and family members

“By starting the Dhimaji centre we give these patients everything for just Rs 300. It would take them an hour or two to get to the camp. This is a huge improvement over going all the way to Tezpur. It takes some time to develop a camp and, as the number of patients increases, we will have the resources to pay a psychiatrist in a nearby district to come to Dhimaji once a month. It will need some convincing but there are socially driven doctors. Also, when they see a psychiatrist from Mumbai coming all the way to Dhimaji, perhaps they will feel motivated to do their bit.”

At Ant, Dr Mohite joined a programme that had been bravely kept running by Dr Kaul and his team. A lot of work had already been done, but a professional psychiatrist was needed and Dr Mohite was just right for that role.

Going forward, the setting up of additional centres and holding camps there will be a much larger effort. It remains to be seen whether an alternative model for broad-based mental healthcare will emerge from this initiative. But, in the meantime, at least some patients who didn’t have a chance to see a psychiatrist now literally have one on call. 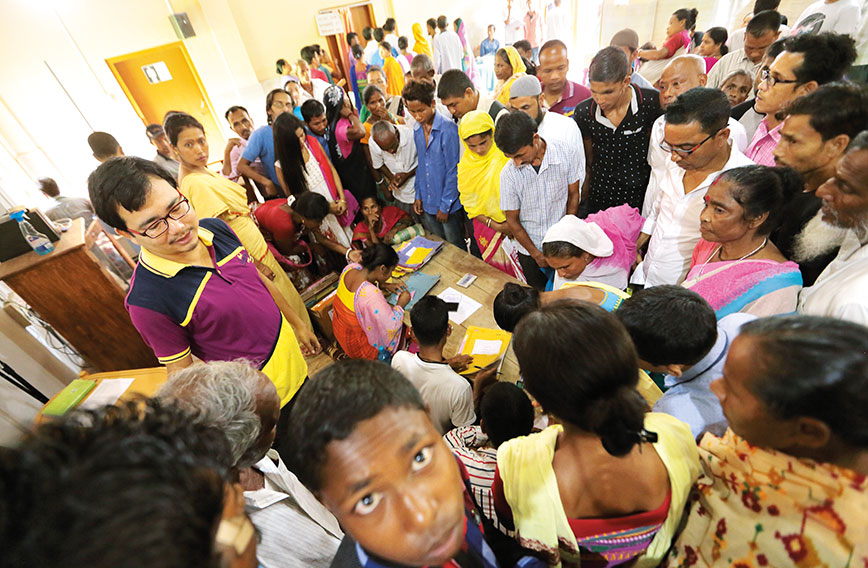 Waiting to register and pay fees