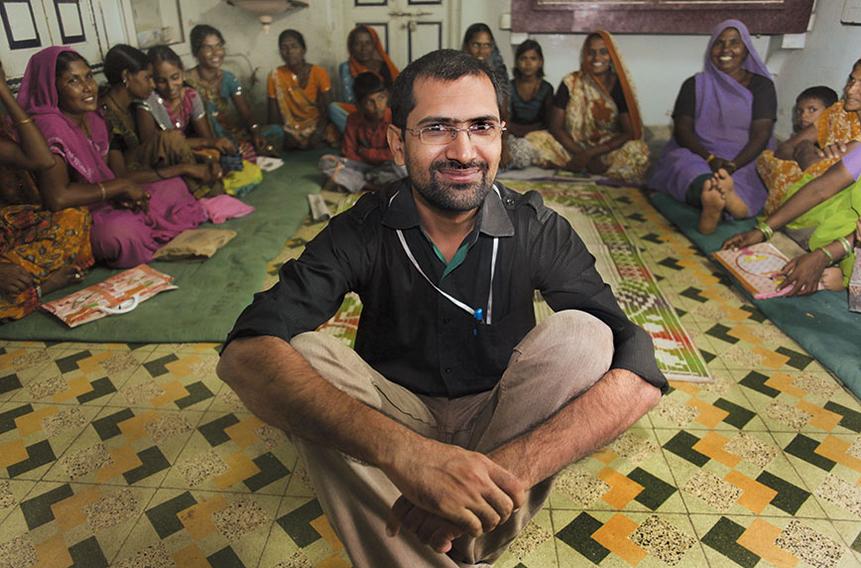 The communal riots of 2002 in Gujarat scarred relations for both Muslims and Hindus. When Urja Ghar was set up in 2004 in Sabarkantha in North Gujarat, the attempt was to heal some of those wounds. It was envisioned as a space where different communities could talk or mingle. Govind Desai is the man behind this vision.

Their strategy was simple. They engaged people in activities like watching films, reading the news, writing stories, etc. After Sholay was screened, Urja Ghar came alive with a discussion on why Amitabh Bachchan was killed in the end. The conversation led to the issue of widow remarriage.

With Sanjay Raval, who was a member of the Bajrang Dal when he became a part of Urja Ghar, it took two years to make a breakthrough. He finally left the Bajrang Dal. Hindus and Muslims questioned fundamentalism within their own communities.

Desai has now taken a backseat and plays the role of a mentor. Youth leaders have emerged from the early participants of Urja Ghar. Over the years, funding has been a problem because measuring the result of a peace project is not easy. But Urja Ghar has slowly changed interpersonal relationships in Lambadiya village.

The terrace of an innocuous two-storey house in a twisted lane offers a splendid view of the 300 houses that make up Lambadiya in Sabarkantha, a district in north Gujarat. It’s quiet and peaceful and you are tempted to think that life here couldn’t have changed much even in 100 years.  But then from downstairs comes the sound of laughter and you realize that this is no ordinary house – it’s Urja Ghar, or Power House  and there’s a little revolution brewing here.

Urja Ghar started as a model project sponsored by Oxfam and Manav Kalyan Trust in 2004. The 2002 communal riots in Gujarat had deepened divisions between the Hindu and Muslim communities. Urja Ghar was envisioned as a space where different communities could mingle and talk. Lambadiya, around 175 km north of Ahmedabad, and Karawada in Udaipur, Rajasthan, were chosen.

“Urja Ghar was conceived as a space where one would interact with the youth and women without speaking directly about communalism,” explains Govind Desai, 32, who along with Sachin Pandya and Shital made up the team. “We formed three groups: one for children from eight to 15 years, another for the youth from 15 to 25 years and a third for women. Our strategy was to engage them in activities like watching films, news, reading and writing stories, photography etc to develop a culture of pluralism. Urja Ghar became a space where one could speak one’s mind, debate, knowing that one’s identity and thoughts would be respected,” says Govind.

Waqar Qazi, 36, who joined in 2007 says, “We restarted a dialogue process. By introducing ourselves as a group offering extra-curricular activities to the children of Lambadiya, and with attractions like computers, we were able to convince parents to allow their children to interact with us.”

Issues were introduced for discussion innovatively, like gender sensitivity through photography. Waqar explains: “We gave the children cameras and asked them to photograph hands of people engaged in activity. They came back with pictures of men holding money, children carrying books, women with brooms, etc. Then we all analysed what they had shot and initiated discussions on gender stereotypes.”

“Watching ‘Sholay’ became a learning exercise when we discussed why Amitabh Bachchan was conveniently bumped off in the end. Maybe widow remarriage was a difficult question to tackle at that time. There were no holy cows. We facilitated the exchange of opposing views and this process of unlearning and resolution happened in front of everybody. What emerged from that democratically shared space was a person who could think on his or her own,” says Waqar. 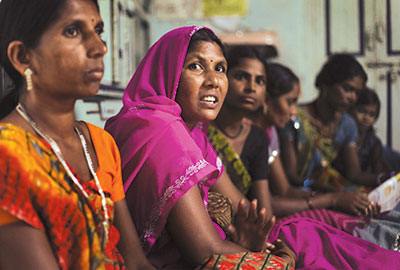 “An agent of change was created that would act like a virus, unfettered by geography, proliferating in the space it inhabited,” adds Govind.

Lambadiya is a small town with a population of around 2,500 people consisting of Hindus and Muslims. It’s a market for 40 to 50 surrounding villages mostly populated by tribals who sell their produce here and buy what they need. Riots had taken place here in August 2000, in response to the killing of pilgrims on the way to Amarnath. But surprisingly in 2002, it was peaceful. The riots of 2000 affected both communities economically. Perhaps in 2002 it was good economic sense which prevailed and bloodshed was avoided.

But the culture of communalism runs deep in Gujarat, and this was going to be the elephant in the room. “When we came here, we realized we could not confront communalism directly, nor take the ‘Hindu-Muslim Bhai-Bhai’ kind of route,” explains Waqar. “Our strategy was clear. We would not appease any community. In fact youth from both religions were questioned about fundamentalism within their communities. They had to examine the conflicts within.  Their identity was recognized and respected, nothing was forced upon them.”

Some youngsters were members of the Bajrang Dal, like Sanjay Raval. Convincing them to accommodate an alternate view was the biggest challenge. It took two years of involvement with Urja Ghar’s theatre group before Sanjay decided to leave the Bajrang Dal. Later, along with Robin Soni and Razzaq, Sanjay became part of a fact-finding team sent to Nasik, Malegaon, Allahabad and Hyderabad to investigate cases of Muslims who were charged under TADA. Sanjay even campaigned for Mallika Sarabhai in the 2009 elections.

At least one communal clash was averted due to Urja Ghar’s active presence. In early 2006, a Hindu boy eloped with a Muslim girl. Trouble began brewing. The girl’s brother was part of Urja Ghar’s youth group. A dialogue was initiated with Urja Ghar’s mediation which helped defuse the tension.  It was agreed that the boy and girl would not be harmed when they were found. Getting the affected parties  to enter into a dialogue and negotiate was the achievement. A few weeks later the couple was located and brought back. Eventually they were separated,  but a clash was averted.

Urja Ghar’s philosophy of creating agents of change starts with efforts at the individual level. It is these success stories that Govind is really proud of.  “Atul was a school dropout  because he had been beaten by a teacher. He was reluctant to go back to school. After he joined Urja Ghar we helped him regain his confidence. On  Teacher’s Day, some two or three years later, he delivered a lecture to his former class.  It was a great victory for him and for us,’ Govind says with pride.

These successes have built close relationships and broken barriers between communities. “It isn’t unusual for a Muslim boy to visit a Hindu home. But it is unheard of for a tribal to visit a Muslim home. Now Shaqeel and Sakkabhai are great friends and go to each other’s homes,” says Govind. “This journey of questioning and realization has built strong bonds across caste and religion. Urja Ghar is a way of life, a liberal space without a hierarchical structure and we are all sathidars or fellow travelers in it,’ he says.

Across the room a young man in his twenties looks on attentively.  Razzaq was an early participant in Urja Ghar.  He is  one of the leaders who emerged from the youth group. “Razzaq was very involved in the theatre group we formed with the youth,” says Govind. “Theatre gave them a lot of exposure to the outside world and to progressive ideas. Plays based on the riots were performed across Gujarat along with NGOs like Anhad as part of a campaign against communalism before the 2007 Assembly elections.”

Razzaq remembers people crying after a performance in Juhapura, a Muslim ghetto in Ahmedabad, and residents of some Hindu villages openly admitting that they had killed people and would do so again. “It was unnerving to be confronted with such emotions,” he says, a little shaken by the memory. This unique exposure had its dangerous moments too when their group was  beaten up allegedly by activists of the BJP.

Other members of the youth group  travelled to Kashmir and lived with families affected by  terrorism. Sonal Solanki, another of Urja Ghar’s bright sparks, remembers her stay with the family of a terrorist and the bond she developed with his children.  “Shahzeen, one of his daughters, liked the bindi  I use and asked me to put one on her forehead. We still remain in touch,” she says.

A meeting of the Vistar Vikas Samitis (VVS) is in progress on the ground floor.  These samitis consist of two to three leaders from  30 to 35 villages where Urja Ghar works.  The samitis meet on the eighth of every month and plan how they will solve problems their villages are facing. Collective action has resulted in a much delayed road being built, errant teachers being brought to book, timely disbursement of a nutrition allowance for pregnant women and less lavish expenditure on rites and rituals.

Govind, Sachin and Waqar have now restricted their roles to being mentors. Youth leaders like Sonal, Razzaq, Robin, Dinesh and Gautam Dabhi, an activist from Ahmedabad, are in charge.

“We haven’t received funding this year, and none is expected. Even the rent of our premises is unpaid for the last six months,” Govind says worried. “We want to expand our activities to other villages and perhaps to semi-urban areas but without funds  all our plans have been kept on hold. We have worked so hard on Urja Ghar, it breaks my heart to just let it go.”