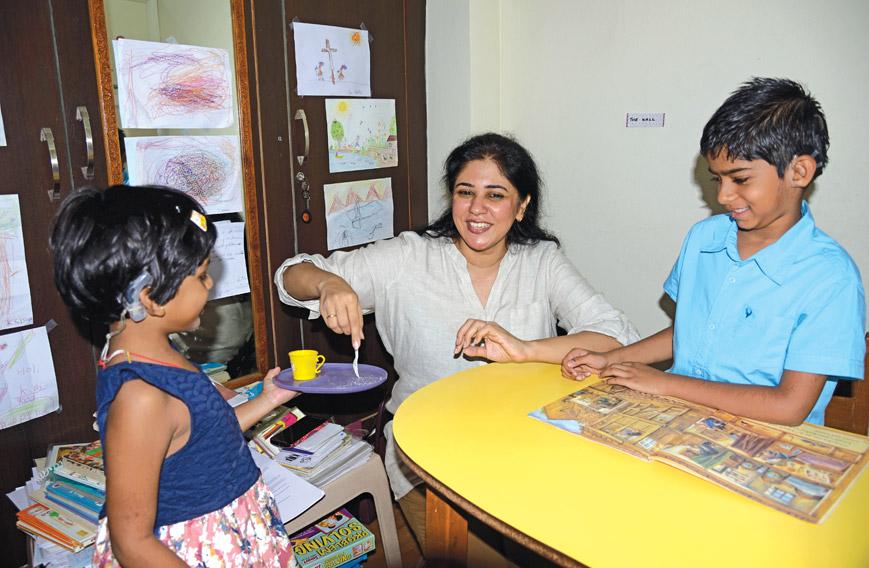 Kim Chadda working with children at the AURED centre in Hyderabad

In 1994, when Kim Chaddha found that her daughter was quite deaf, she was devastated. When her daughter was four, she discovered AURED in Mumbai and through auditory verbal therapy her daughter can now hear and lives a perfectly normal life.

Chaddha is a therapist herself today, but the journey from a devastated parent to a therapist was not easy. It was Aziza Tyabji Hydari who convinced Chaddha to train as a therapist. There was no therapy centre in Hyderabad then and she would be giving deaf children access to therapy that could change their lives.

Since then, Chaddha has worked with her patients on a one-to-one basis. She’s worked with over 150 children. She brings her experience as a parent to bear on her practice. She can understand what the parents are going through, and acts as a sounding board for them.

Chaddha runs an AURED centre in Hyderabad today. She was reluctant to become a therapist but her work has been very fulfilling.

It was a beautiful baby that Kim Chadda gave birth to. She weighed 3.5 kg and the hospital said she was perfect. The way she looked, everyone agreed. Chadda was especially relieved. Doctors had cautioned her about a one percent chance that the baby would be deformed because of antibiotics she had taken when she didn’t realise she was pregnant. They had in fact suggested an abortion so as to be on the safe side. But Chadda had decided to go ahead with the pregnancy and now, after the successful childbirth, she was over the moon with joy.

As a year went by Chadda felt concerned that her baby wasn’t walking or repeating words. The paediatrician assured her that all was well. But further checking revealed that the baby couldn’t hear  — and because she couldn’t hear she couldn’t find the early balance needed to walk.

It was 1994 and in Hyderabad at that time there was the equipment but not the expertise to test a baby’s hearing. To know how deaf her daughter was Chadda rushed off to Mumbai, where the expertise existed. It turned out that the baby was profoundly deaf.

Soaking in the disappointing news, she returned to Hyderabad and found help from the John Tracy Clinic in the United States which worked with parents. In this way she helped her daughter for four years. She then found EAR in Mumbai but it refused to take her daughter because she was already four. In 1999 Chadda found AURED or Aural Education for the Deaf, which had been started in 1986 by Aziza Tyabji Hydari.

AURED provides Auditory Verbal Therapy, which literally means listen and speak. Children like Chadda’s daughter who are born deaf need their hearing supported either with a hearing aid or an implant in the cochlear. When they begin to hear sounds they learn to attach meaning to them and reproduce them.

A child with normal hearing picks up sounds even as a foetus while in the womb. After it is born, it connects to the world around it and begins to pick up language and decipher ambient sounds. Hearing memory develops as it navigates situations and relationships. A child born deaf is denied this seamless connectivity, which begins in the womb. It is cut off. Since it can’t hear sounds, it can’t reproduce them or understand contexts. The longer it stays like this, the more difficult it is to get the child to speak.

The most successful interventions through Auditory Verbal Therapy happen within the first two years. Chadda was lucky to have acted quickly — though she had to begin working on her own with her daughter. She found AURED only later when the girl was four. But thanks to the sum total of these efforts, today the girl is a completely normal young woman studying for a degree in architecture.

Of course it wasn’t easy. Chadda had to work continuously with her baby — and she is also a single mother, having lost her husband early to a heart attack.

The AURED way isn’t just about sessions in a clinic. It goes much beyond that and requires parents and others in the family to help a deaf child build new foundations of consciousness. Devices can make sounds audible, but speech develops through interactions in multiple situations. 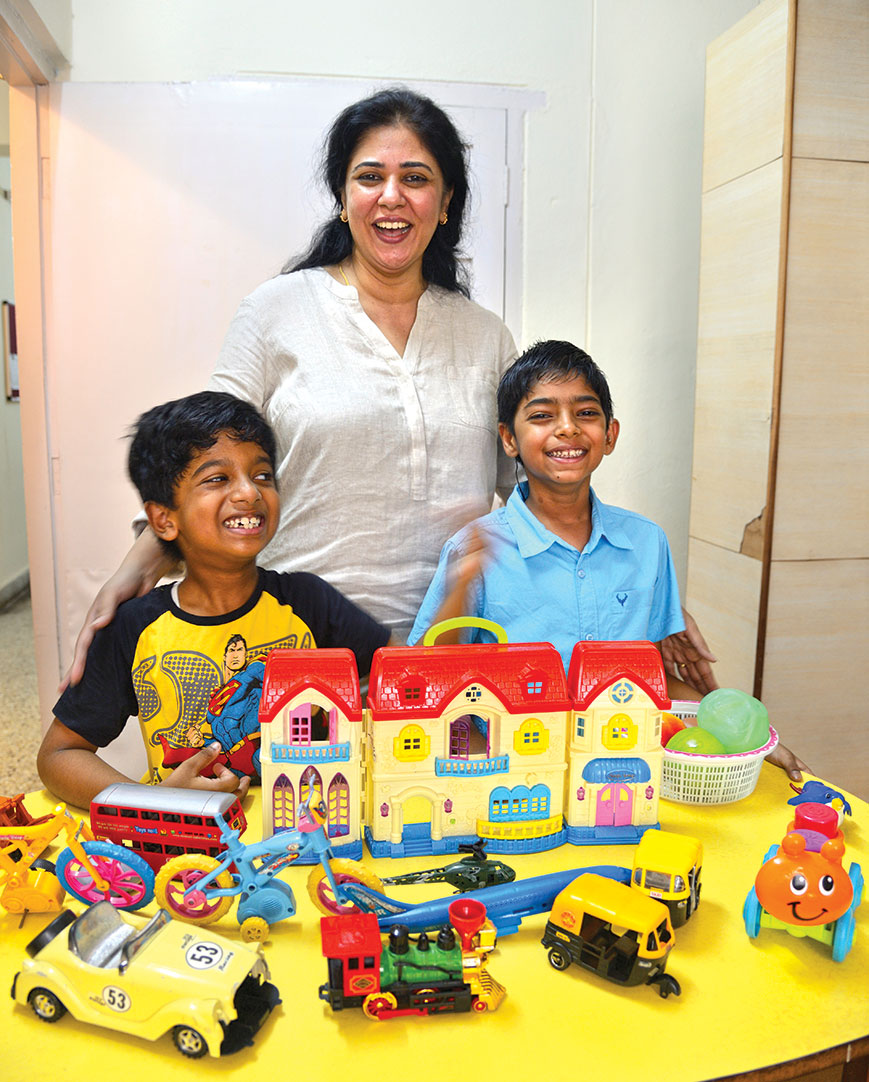 Chadda immersed herself in teaching her daughter to speak. She imbibed so much from AURED that she went on to become an auditory verbal therapist herself. It wasn’t the way she had planned it. Handling her daughter was tough and she believed that was as much as she could do. But when Aziza, AURED’s founder, asked her and then goaded her a bit, she agreed to formally train and be a therapist herself.

Chadda now runs an AURED centre in Hyderabad. Scores of children have benefitted. But more importantly, Chadda has shown how a parent who has struggled to restore her own child to normalcy can give back to society. Parents like her have the potential to significantly help others because of what they have been through.

Chadda has been practising as a therapist since 2004. In Hyderabad now a baby can be easily screened for hearing loss, unlike when Chadda gave birth to her daughter. However, screening is not mandatory and not always done. But it is a quick and simple process. Clicking sounds are made through an earpiece and monitoring equipment picks up the responses of the cochlear. It is called the automatic otoacoustic emission test. In case this fails, there is another one called the automated auditory brainstem response. 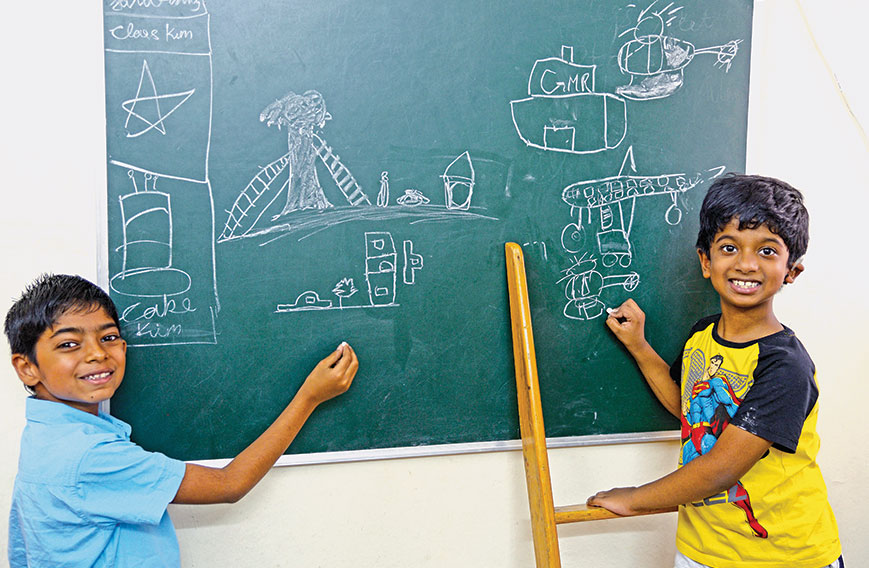 Together with newborn screening, therapy centres have also come up. Cochlear implants are also being done in the advanced hospitals. But since there isn’t widespread awareness, babies continue to go unchecked and end up being helped for hearing loss when it is already too late.

“The first child who came to me had been to the  audiologist at Apollo who had referred the parents to Aziza. She asked him to send the child to me.  I said the family should go to AURED and Aziza in Mumbai,” she recalls.

“When Aziza said why don’t you take him, I said no I’m not teaching another deaf child. I have my own. I cannot. I will not because it’s a huge task to take on a child’s listening and language because I wasn’t fluent in Telugu. But I learnt it along the way over seven or eight years. I teach in Telugu. It’s all through listening and it’s been a wonderful journey.”

“In the past 12 years, I’ve worked with over 150 children on a one-to-one basis, not in a class. As a parent you learn a lot more because you go through the experience of bringing up your own hearing impaired child who is profoundly deaf,” explains Chadda.

Having a parent as a therapist is hugely advantageous because the treatment involves covering a lot of unfamiliar territory for the parents of children who need help. The parents are invariably challenged by the situation they find themselves in. There are tests to be done and the child needs to settle with a hearing aid. After that it is not just a question of picking up sound, but learning to communicate.

“There are tests you do to know what the loss is, what the brain activity is. Once those results come in you are able to say whether the loss is moderate, mild or profound. For profound deafness we definitely advise a cochlear implant for speech development. But before that you can equip the child with a hearing aid,” says Chadda.

“A totally deaf child does not know what hearing is. Once equipped with a hearing aid or cochlear implant, the child needs conditioning to hear six or seven sounds in the speech spectrum. These sounds are very important for the child to start off with. Hearing is a foreign thing and the child has to get used to it. The parent has to, all the time, encourage the child to let it become a part of the body just like a pair or glasses or anything that you have to get accustomed to. Children throw off a hearing aid because sometimes it’s too loud, sometimes it’s irritating.” 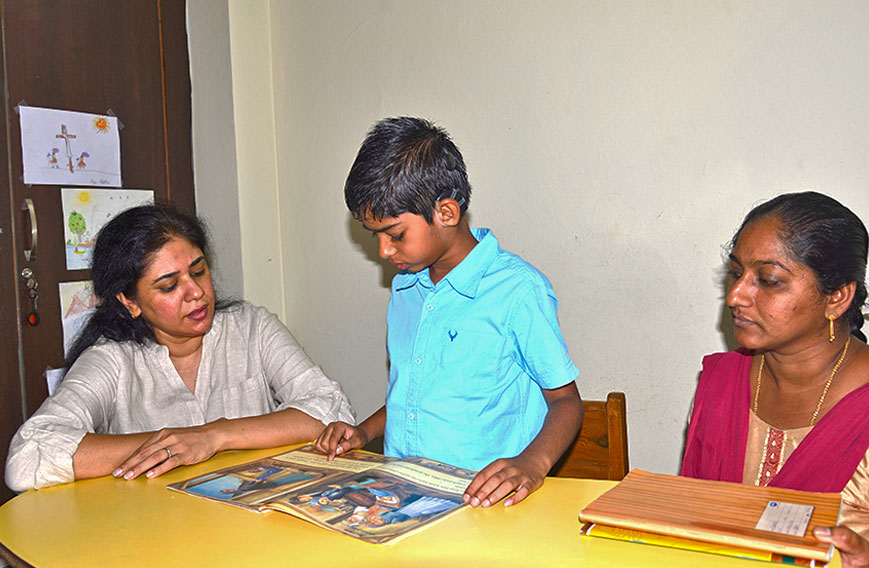