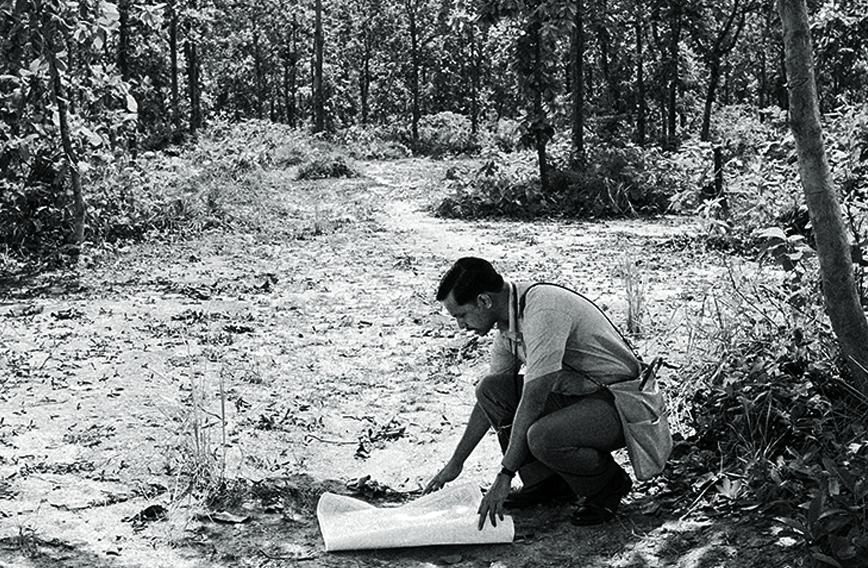 Promotho, a surveyor, arrives in Shonajhuri to prepare a blueprint for a road through the forest

Shonajhurir Bhoot and the spirit of the forest

Over its runtime of 90-odd minutes, the film — which does not look like any other cinematic work that has emerged from India in a while —  unfolds at its own contemplative pace, pulling us, with a mix of surprising sleights on one hand and the subtle art of suggestion on the other, into a luminous black and white canvas that intermittently bursts into colour towards the end. The ideas and visuals that Shonajhurir Bhoot  is composed with are shot through with irresistibly hypnotic energy.

Shonajhurir Bhoot  is shot digitally but has the feel and density of film. “We would have loved to shoot it on film, but we couldn’t have afforded it,” says Dutta, a Kolkata-based singer-musician-filmmaker-visual artist who feels the need to “go beyond the ‘gritty’ reality that many contemporary Indian films set out to do portray . “These films,” he adds, “forget to go beyond the reality around us and explore what lies outside of the obvious”.

The transcendent quality of Shonajhurir Bhoot  springs from the defiantly non-conventional methods it employs to state what at first flush look like commonplace facts. But once it defines the parameters of the supposedly real world, it revels in veering away into unsettling dimensions.

An absurdist sensibility drives the experimental film, which taps into Bengal’s hoary tradition of ghost stories and fantasies to dwell upon the dual bane of deforestation and displacement caused by an unthinking process of industrialization that has its roots in the mid-20th century, when the world was emerging from the destruction wreaked by World War 2 and India was only beginning to find its feet as a newly-independent nation.

“We felt a dearth of the possibility of free expression in the kind of cinema that dominates in this country,” says Dutta. “Breaking away from it and evolving our own idiom was both a necessity for us and a challenge.” 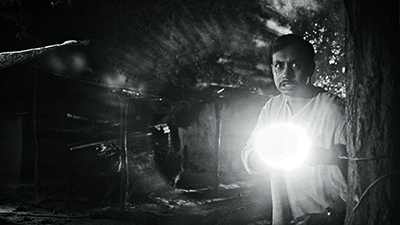 Shonajhurir Bhoot  is set in rural Bengal of the early 1960s. The film is made up of two distinct yet mysteriously overlapping stories. One, based on a story by Dutta himself and titled ‘Polymorph’, is about Promotho, a surveyor who arrives in Shonajhuri to prepare a blueprint for a road to be built through the forest.

Promotho reaches the place by train and then takes the only bullock-cart waiting outside the station to be transported, after a long, languorous ride, to the circuit house where a solitary careworn man does the cleaning and cooking. On the way, he sees a light flashing at him from the jungle. He asks the cart driver about the source and meaning of the ‘green’ light. The latter replies: What green light? Everybody sees in black and white. A little later, as he ambles around in the forest, he hears his name being called almost inaudibly; he finds a woman wailing outside her dwelling; and runs into a bohurupee (polymorph), a farmer-turned-labourer who is in the process of disguising himself as a ghost for a performance at the Saturday fair.

The other story — ‘Maya’, adapted from a Bibhutibhushan Bandopadhyay short story — is about a genial villager, Bhupathi, who has the looks and demeanour of one who is from around here. He is at a loose end when we first see him. Accused of a theft that he may not have committed, Bhupathi has just lost a job. Luckily, he lands another one as the caretaker of the ancestral house of an ageing man who lives in Calcutta and infrequently visits the property.

But markedly more important than the two protagonists is the forest itself, the golden groves of the title, which asserts itself as a destructive, corrective force in the case of Promotho and as a benign, accommodative, life-altering influence on Bhupathi.

The former is standoffish, rude and insolent. The latter is the exact opposite — completely self-effacing, at ease with the environs, and blessed with the sort of curiosity that allows him to foray into the unknown despite warnings. Nature, represented here by the forest, reacts in different ways to the two men.

As the divergent experiences of the two men play out, the film is littered with disconcerting, sometimes indecipherable sideshows that have little to do with the main narrative but do serve to complete the picture that the two directors are seeking to conjure up. In one scene, unnoticed by two conversing characters, a man buries himself. He digs a grave and lies down in it, a clear referencing to farmer suicides. In the next story, the protagonist comes upon a covered grave with a handwritten sign on it that reads: Beware of farmers.

“We want to go beyond just plot and character development,” says Sen, who worked on films like Anik Dutta’s Bhooter Bhobishyot and Aparna Sen’s Sonata before directing Shonajhurir Bhoot. “People might say that this is a case of style over substance. But style is very important for us.”

Nor is that all. Shonajhurir Bhoot, despite being located in a specific time zone, has resonances that stretch from World War 2 to present times to take in the plight of farmers and daily wagers struggling to find work that can sustain them and their families.

Especially intriguing is the film’s disorienting use of sound and background music. We hear contemporary pop in a story set in the interiors of Bengal of nearly 60 years ago. If that isn’t radical enough as a departure from the norm, robust funk accompanies a scene of violence directed at a man whose intrusion disrupts the rhythm of the forest and unleashes its fury.

Also on the soundtrack are the roar of fighter jets, natural noises emanating from the insides of the jungle, children reciting a nursery rhyme about the war and, amazingly, a new-millennium Stacey Kent song featuring Jim Tomlinson on his saxophone (“So nice”), cranked out by a gramophone in a village home. 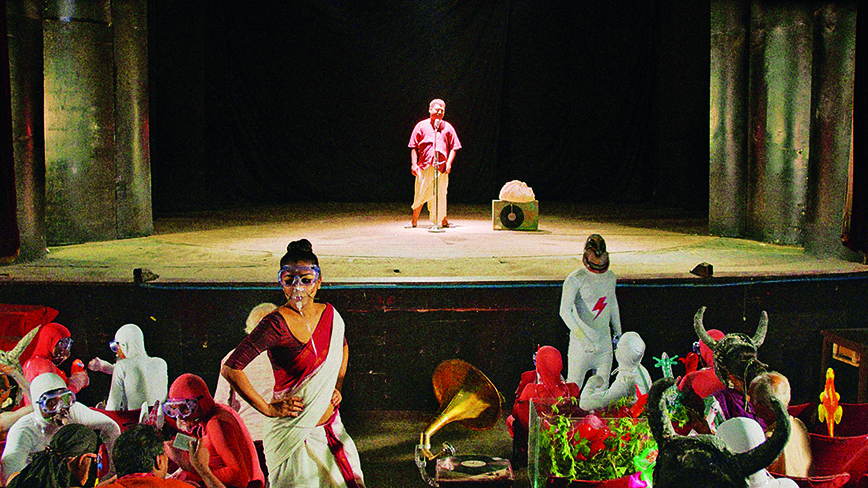 Dutta and Sen also factor into the Shonajhurir Bhoot screenplay a nod to the great Japanese filmmakers who have influenced the two with their urgent, intense portrayal of the aftermath of the war, notably Hiroshi Teshigahara (Woman in the Dunes, Pitfall). Here, past, present and future intermingle seamlessly even as time appears to stand still.

The orchestrated contradictions create magical moments that are enrapturing on one level, baffling on another. Isn’t that how life — an amalgamation of shocks — is?

Shonajhurir Bhoot, as a film, represents a revolt against the reality manipulated by the media to control the minds of the masses. By jumbling up narrative elements in a way that does not make instant sense but demands complete absorption of the images in order to be grasped, partially if not fully, what Dutta and Sen achieve is an effect that separates the wheat from the chaff, the attentive film watcher from the casual one weaned on safe images conveyed through industrial cinema, television and social media.

“By using methods derived from the theatre of the absurd, we are seeking to bypass the narrative and achieve hyper-reality,” says Sen. That is precisely why Shonajhurir Bhoot does more than just tell two stories that raise questions. The structure of the film — a provocative pastiche of the real and the imagined, the tangible and the tantalisingly tangential — is itself a full-fledged story that possesses the power to transfix the audience in a way that is, ironically, liberating.