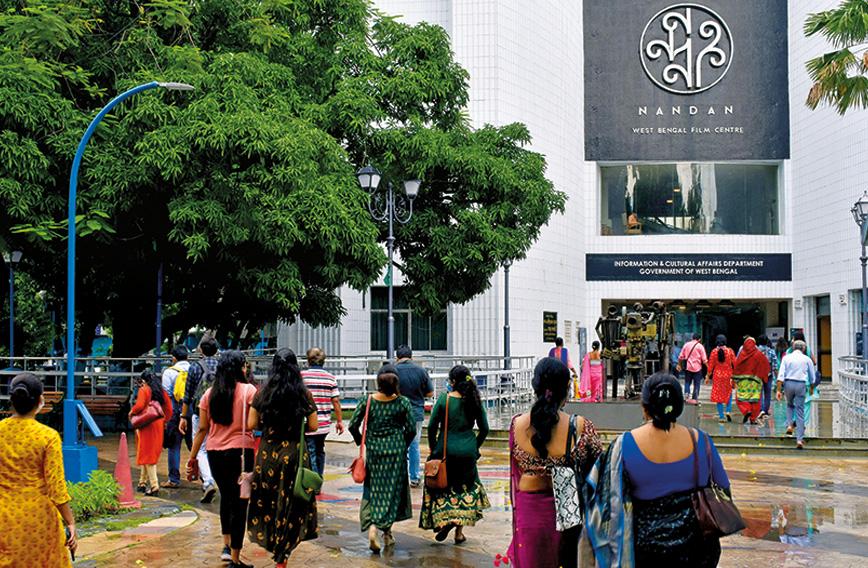 Nandan seems to be regaining its arthouse tag

In Kolkata, a saviour for small films

NANDAN, the West Bengal Film Centre in central Kolkata, is a complex unlike any other in India. In August, as movie halls reopened after the devastating second wave of the coronavirus pandemic, the state government-sponsored ‘multiplex’ began screening two non-mainstream Bengali titles — Binisutoy (Without Strings) and Runanubandha (The He Without Him). Both drew full houses.

Nandan, 36-years old, has served as an outlet for independent films made in Bengal and elsewhere in the country. However, for well over two decades now, it has screened commercial fare as well to the consternation of those who believe that, in doing so, Nandan has diluted its stated purpose.

It is in this context that the decision to play the experimental Runanubandha must be seen. “I was happily surprised,” says Amartya Bhattacharyya, the film’s writer and director, “when I learnt that the Nandan screening committee has given the go-ahead to my film.”

Runanubandha, which tells the story of a girl who arrives in Kolkata in search of her missing father, is an uncompromisingly independent film that steadfastly defies the norms of regular narrative cinema. It deals with alternative realities and multiple layers of experience as it follows the protagonist’s quest.

Does Bhattacharyya see the selection of Runanubandha — it is playing in Auditorium 2 — as a sign that Nandan is back to playing the role of a saviour for small films seeking exhibition outlets? “I hope so,” says the Bhubaneshwar-based filmmaker who has a day job with an Indian IT behemoth. “Ideally, these are the types of films that Nandan should screen much more than it does,” he adds.

Nandan was inaugurated in 1985 by filmmaker Satyajit Ray, who was actively involved with the planning of the film centre. He also designed its logo and is believed to have had a say in its architectural plan. In its first decade, Atanu Ghosh, writer-director of Binisutoy, points out, “Nandan was a regular hunting ground for members of Kolkata’s numerous film societies that brought films from across the world to the city.”

In the late 1980s and early 1990s, Cine Central, Kolkata’s leading film society, would screen all its films either in Nandan 2 or the nearby Sarala Ray Memorial Hall. Ghosh, as a young man, was a Cine Central member and a regular at those screenings.

“There was a time when audiences would watch films here in absolute silence,” says Ghosh. “Anybody who dared to speak or make any noise during a screening would be instantly shouted down by the others in the auditorium. But then, as commercial films began to find space in Nandan’s year-round screening programme, the audience profile underwent a change. Lay film fans not acquainted with the viewing etiquette cultivated in Nandan in the early years became a part of the audience.”

Nandan lost its arthouse tag in the bargain. “Some of the films that made it to the screens here were definitely not the sort that Nandan was created to promote,” says Ghosh.

Binisutoy is Ghosh’s eighth narrative feature. The genteel, lyrical, life-affirming drama revolves around a man and a woman from Kolkata’s stratified corporate world whose paths cross as they seek to escape the drudgery of their structured lives by creating alternative identities for themselves in a bid to reconnect with their inner selves and the world around them.

The enthusiastic response that Binisutoy has garnered from the Nandan audience has, at the time of writing, led to its run being extended beyond the second week. “We’ve had several houseful shows in Nandan 1 (the film centre’s biggest auditorium with nearly 1,000 seats),” says the National Award-winning director.

Since 1995, the year the Kolkata International Film Festival (KIFF) was launched, Nandan has been the principal venue of the annual event. While the Rabindra Sadan-Nandan-Sisir Mancha cultural complex continues to be the KIFF fulcrum, it no longer has the honour of being the site of the festival’s star-studded inaugural function.

In 2011, soon after Mamata Banerjee’s Trinamool Congress ended the Left Front’s unbroken 34-year rule in West Bengal, the KIFF opening ceremony was shifted to the cavernous Netaji Indoor Stadium to accommodate the fans of Bollywood megastars led by Amitabh Bachchan and Shahrukh Khan, who are in attendance every year.

That is a far cry from the principles that went into the planning of Nandan. The foundation stone was laid in 1980 by the then Chief Minister, Jyoti Basu, during the first term of the Left Front government. It was one of India’s first multiplexes. Nandan had two screens to begin with. A third one was added a few years later.

When Buddhadeb Bhattacharya, information and culture minister in Jyoti Basu’s Cabinet and a cinema aficionado, became the state’s chief minister, the film centre received a bit of a boost but, at the same time, fell into a pattern that prevented it from evolving into a true cinematheque-like institution on the lines of the one in France that Satyajit Ray had a special fascination for.

“The launch of KIFF definitely enhanced Nandan’s importance,” says Ghosh. Filmmakers of the stature of Michelangelo Antonioni, Fernando Solanas, Krzysztof Zanussi, Miguel Littin, Jafar Panahi and Catherine Breillat, among others, have passed through its portals over the years. But the increasingly populist aims of Nandan and KIFF have, to a certain extent, deflected it from its original course.

In the 1980s, Nandan screened films such as Carmen, Italian director Francesco Rosi’s version of Bizet’s opera, Govind Nihalani’s Doordarshan mini-series Tamas (as a four-hour feature) and Jiri Menzel’s Czech cinema classic Closely Observed Trains, among other notable works of the cinema. Post Satyajit Ray’s demise in 1992, Nandan began to deviate from the exclusive aim of promoting independent cinema. It turned into just another screening facility that embraced commercial films from both Hollywood and Bollywood.

There have, however, been honourable exceptions in more recent years. First-time director Manas Mukul Pal’s Sahaj Paather Gappo (Colours of Innocence), an adaptation of a Bibhutibhushan Bandyopadhyay short story about two boys from an impoverished family in rural Bengal, was released in Nandan, where it ran for many weeks and found the audience it was seeking. Had he been around, Satyajit Ray would have been pleased no end.