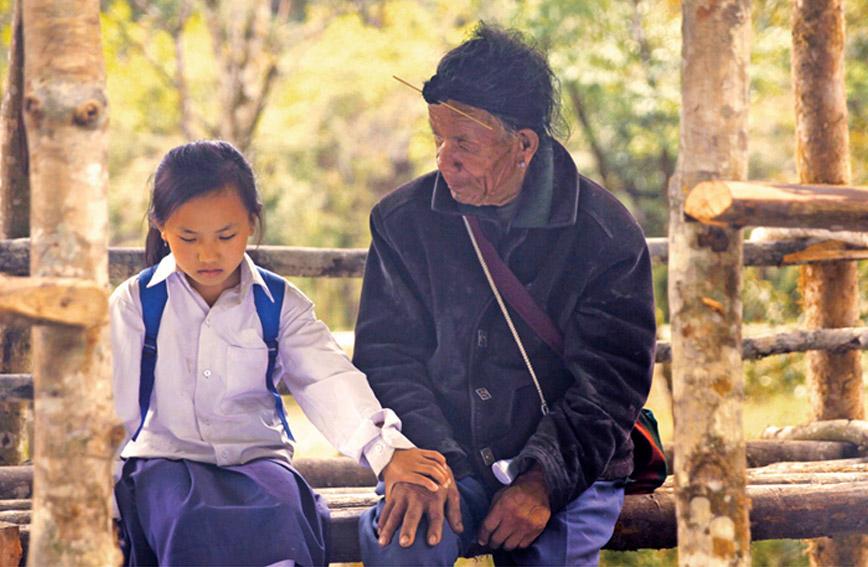 Guwahati-based filmmaker Bobby Sarma Baruah’s second narrative feature uses the rare Rajbangshi language and original tracks in the voice of Pratima Barua to evoke the spirit and essence of the time and place in which the Calcutta-born recording artiste, a member of the royal family of Gauripur, discovered her calling.

Pratima Barua, nicknamed ‘Hastir Kanya’ (Daughter of the Elephants) for her affinity with the mahouts of her native land, was a woman way ahead of her times. Encouraged by her father, Prakritish Chandra Barua (Indian cinema pioneer Pramathesh Barua’s brother), she broke free from the confines of the palace, roamed free and befriended peasants, boatmen and cowherds. It was a rebellion that raised many eyebrows, upset her mother no end, but shaped her life and career.

Accompanying her father on royal hunts deep inside the forest around the royal abode, Pratima heard the songs of the mahouts and was enraptured by them. From these men she learnt a great deal and incorporated their sounds into the popular folk songs that she rendered over several decades for films, All India Radio (AIR) and other platforms. In the process, she lent a new dimension and reach to Goalpariya folk music.

Sonar Baran Pakhi opens with a scene in which Pratima Barua, as a child, is being told the folk tale of Hastir Kanya, about the neglected wife of a priest. The husband brings home a second wife, the brattish daughter of another priest. The distraught first wife weeps by the river. Her tears turn the water salty, which attracts a herd of elephants. The pachyderms hear the woman’s tale of woe and, moved by her plight, decide to make her one of their own. They transform her into an elephant. So mesmerised is the young Pratima by the story that it leaves a lasting impression on her.

All this and more form the narrative spine of Sonar Baran Pakhi, which premiered in October last year at the 18th MAMI Film Festival in Mumbai and then travelled to numerous other festivals in and outside the country, including the International Film Festival of South Asia, Toronto, and the Indian Film Festival of Los Angeles (IFFLA).

“It was my dream for a long time to bring Pratima Barua’s life and music to the big screen,” says Sarma Baruah, who made her directorial debut in 2014 with Adomyo (Irrepressible), a powerful tale of a young woman who loses her husband to AIDS and faces several challenges in raising her only daughter. Adomyo won an award at the Dhaka International Film Festival.

In Sarma Baruah’s new film, Pratima Barua is played by three actresses at different stages of the legendary singer’s life — Susmita Ray, Pranami Borah and Arati Barua. The principal casting took the director a fair amount of time and deliberation. “I had to be absolutely sure that I got it right,” she says. “I approached the enterprise with a sense of trepidation. After all, I was dealing with an enormously respected figure of Assamese culture. I couldn’t afford to slip up.”

This meant that Sarma Baruah, despite having worked with Pranami Borah in Adomya and knowing her capabilities as an actress, had to put the latter through an audition and costume test to ascertain her suitability for the part. It required her to play Pratima Barua from her late teens to her mid-40s. The ageing protagonist is played by Arati Barua, a veteran actress with a proven track record.

More than the faces that Sarma Baruah puts on the screen, Sonar Baran Pakhi is defined by its evocative visual texture and soundscape. The director approaches the recreation of the life of Pratima Barua with respect and restraint.

Yet the film does not shy away from bringing out the human aspects of the late singer’s personality. She smoked and drank. She continued to pursue her musical career even after marrying a college professor (Shankar Pandey) and becoming the mother of two daughters. And she held her own in an age when women were allowed little social leeway. Sonar Baran Pakhi presents a rounded portrait that is both revelatory and highly engaging.

It helps that the camera (cranked by Avijit Nandy) is an unobtrusive presence and the 86-minute film exudes an unhurried feel thanks to a preference for long, steady takes. “I needed that kind of rhythm and pace in order to capture the essence of the period and the pace of life in Pratima Barua’s part of the world when she was at her peak,” says Sarma Baruah, who is also a poet and short story writer and currently working on a PhD dissertation on the influence of folk culture on Assamese cinema.

“Rajbangshi is not my mother tongue but this film could not have been made in any other language for this is the language of Pratima Barua’s music. I had to research for close to two years to grasp the finer nuances of her work,” says
Sarma Baruah.

To further strengthen the authenticity of the treatment, the director had to source decade-old songs from the AIR archives. “Procedures had to be followed. Initially, AIR could not find anything. I thought I had hit a deadend. So I turned to HMV for help. There, too, I made little headway. Luckily, I eventually got what I was looking for from AIR itself. Some of the tracks had seriously damaged portions,” she says.

While, like Adomyo, Sonar Baran Pakhi is the tale of a remarkably talented and tenacious woman who dared to carve her own niche in a conservative social milieu, it occasionally goes beyond the life of Pratima Barua to shed light on other great personalities of the period, including Assam’s tallest cultural figure, Bhupen Hazarika.

Hazarika was instrumental in spotting Pratima Barua’s talent when he heard her at a jalsa held in the Gauripur palace in the mid-1950s. He roped her in to sing a Goalpariya folk song in his very first directorial venture, Era Bator Sur (1956). Pratima Barua’s voice instantly made its way into the hearts of music fans and Goalpariya folk music, barely known outside a limited sphere until that point, took Assam by storm.

Hazarika is played by actor Nilim Chetia. Another real-life personality who is a fleeting part of the Sonar Baran Pakhi script is filmmaker Ritwik Ghatak, who, according to legend, had proposed marriage to Pratima Barua through her father.

Unfortunately, for filmmakers like Sarma Baruah, one of several women directors who have ventured into Assamese cinema of late, getting ahead in a world dominated by Bollywood is a tall order. “I am proud that so many Assamese women are helming interesting films, but as far as promotion and marketing of these films is concerned, we simply do not possess the wherewithal to break through the clutter,” says the director. “Given the mass-oriented cinema culture that we live in, it is very difficult to take my kind of films out to the people.”

Persistence is the name of the game. From Pratima Barua’s times to Bobby Sarma Baruah’s,
the scenario hasn’t changed all that much for women striving to make their mark in Assam’s cultural domain.