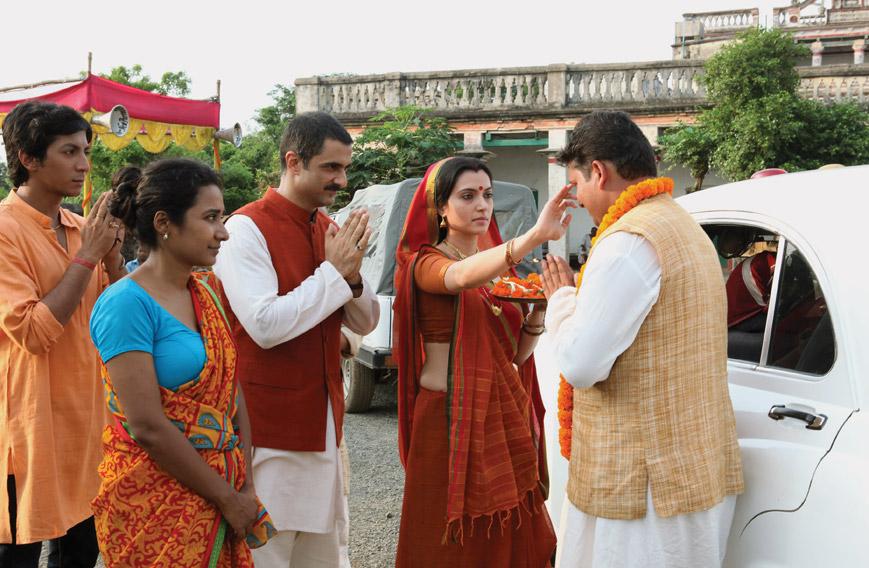 The India that debutant writer-director Bikas Ranjan Mishra wades into with the hard-hitting caste oppression drama, Chauranga, is a blighted world far removed from the la-la land that mainstream Bollywood cinema conjures up for its fans Friday after frenzied Friday.

Yet, Mumbai potboilers and their superstars are alluded to throughout the film, both in lines of dialogue and in entire situations. But in its intricate and dense milieu, song and dance can offer little solace to those whose backs are forever against the wall in a losing battle for dignity.

When a zamindar — the key antagonist in Chauranga — treats upper caste men to a feast to mark the inauguration of a new tubewell, there is no place in the celebrations for villagers who exist outside the social charmed circle. The latter have to be content with token sweetmeats.

However, the open-air projection of a Salman Khan blockbuster the same evening unifies them all as they lap up the spectacle on a makeshift screen. But can the few hours of escapist entertainment camouflage the fact that escape is out of the question for the Dalits of the village?

Chauranga, which made waves on the international festival circuit before hitting multiplex screens in several cities of the country in early January, stares at the dark reality of caste hierarchy in the face.

Marked by unflinching honesty, it is pointed and provocative in its rendering of Dalit despair. Its pertinent theme is, however, not the only reason why it is an important film.

Filmed on location near Santiniketan and in Odisha’s Keonjhar district after plans to set it in Jharkhand fell through, Chauranga is especially remarkable for the sustained restraint it employs to address the intertwined themes of caste conflict, gender inequality and sexual repression.

The film eschews dramatic flourish and agitprop posturing, and that significantly heightens the urgency and acuity of its message.

The indie film, produced by Onir’s Anticlock Films and actor Sanjay Suri’s Kahwa Entertainment besides several other funding entities, is an angry drama that pulls no punches, but the director refrains from getting into combat mode.

Mishra, who wrote 10 drafts of the screenplay before filming got underway, is more a concerned and disconcerted chronicler than an agitated and confrontational activist. “My intention was simply to probe the severe inequities in our society and tell an engaging story in the bargain,” says the 35-year-old filmmaker and critic.

Chauranga narrates the tragic tale of a Dalit family – a mother and her two sons who rear pigs for a living. They are at the receiving end of upper caste tyranny in an unnamed village.

As film academic Ira Bhaskar pointed out in the course of a panel discussion at the end of the Chauranga premiere in New Delhi, Indian cinema has rarely dealt with the ugliness of the caste system.

“It is easier to tackle the divide between rich and poor on the screen. Caste divisions are a far more complex phenomenon, which explains why our filmmakers have steered clear of it,” she said.

Mishra doesn’t shy away. The maturity and sense of purpose he invests Chauranga with is reminiscent of the spirit of the new Indian cinema that was spearheaded in Mumbai in the 1970s by the likes of Shyam Benegal and Govind Nihalani.

But at no point does Chauranga look or feel like a film that belongs to the past. The reason is obvious: not much has changed since Benegal (Ankur, Nishant) and Nihalani (Aakrosh) made their films about caste and class violence in rural India.

“The situation is pretty much the same as it was back then,” says writer-director Mishra. “Only, in many rural pockets, there is much less reason for hope today.”

The idea of Chauranga germinated from a news headline about a Bihar boy who was killed in 2008 for writing a love letter to a girl of a higher caste. Around the real-life incident, Mishra constructs a disturbing portrait of a social world in which caste discrimination plays out in shocking ways.

“The village in Chauranga is not unlike the village in Hazaribagh (in what is now Jharkhand) that I grew up in and still have close ties with,” says Mishra.

“Several of the characters in the film, including the blind priest (who represents the face of religious orthodoxy and is played by veteran actor Dhritiman Chatterji), are modelled on people I knew personally as a child,” he adds. “The village reflects my recollections.”

At the outset of the film, the village in Chauranga, on the face of it, seems like the most ordinary, innocuous place on the planet. But simmering under its calm surface are violence and tension.

“Atrocities happen in our villages all the time. But these incidents are generally kept away from public view and we continue to live in denial,” says Mishra.

Chauranga, for all the mayhem that it incorporates into its screenplay, does not end on a pessimistic note. “I did not want that. My young protagonist is, after all, driven by the spirit of rebellion,” says Mishra, who nursed the film project through a six-year-long struggle.

While the film is primarily about subjugation and brutality, it does not, for its protagonist, rule out the possibility of surviving and starting over. But the price that he has to pay in order to break free isn’t insignificant either.

“My film owes much more to Shyam Benegal’s Ankur than to any other film about caste discrimination that might have been made in more recent years,” says Mishra.

“Directors of the earlier generation believed that things would change for the better for the downtrodden as India went down the path of progress. But that did not happen. Now, of course, development means only shopping malls, bullet trains and highways,” he says.

Chauranga is about defenceless people at the mercy of the rich and the powerful. It revolves around a 14-year-old Dalit boy, Santu (played by Soham Maitra), who, oblivious of the caste fissures that run deep in his nondescript little village, develops an infatuation with the daughter of a ruthless landlord.

Santu is helped by Bajrangi to write a love letter to Mona (Ena Saha), the zamindar’s daughter. The consequences are inevitably tragic.

That apart, the boy dreams of going to school like his elder brother, Bajrangi (Riddhi Sen), but his mother who works as a maid in the landlord’s haveli does not have the means to help him get there.

The older boy spends much of his time in a nearby town, where his school is located. The younger sibling, therefore, sees education as his ticket out of this world that he hates.

Their mother, Dhaniya (Tannishtha Chatterjee) has an illicit relationship with the zamindar, Dhaval (Sanjay Suri), and hopes that her liaison with the powerful man will do the trick for her younger son. But Chauranga has an open-ended climax: it does not let the audience off the hook by offering easy closure.

While Chauranga’s principal female character, Dhaniya, is no pushover, Dhaval’s wife, Nidhi (Arpita Chatterjee), is a victim of deeply entrenched patriarchy. There is another woman in the landlord’s household, his Ramcharit Manas-reciting mother (Swatilekha Sengupta). But the reasoned voices of these women are of no consequence in this malevolent universe.

Mishra’s empathy with the underdog is unmistakable. By going where Hindi cinema rarely does, his maiden film heralds the arrival of a strong and unique voice in Mumbai’s independent cinema.