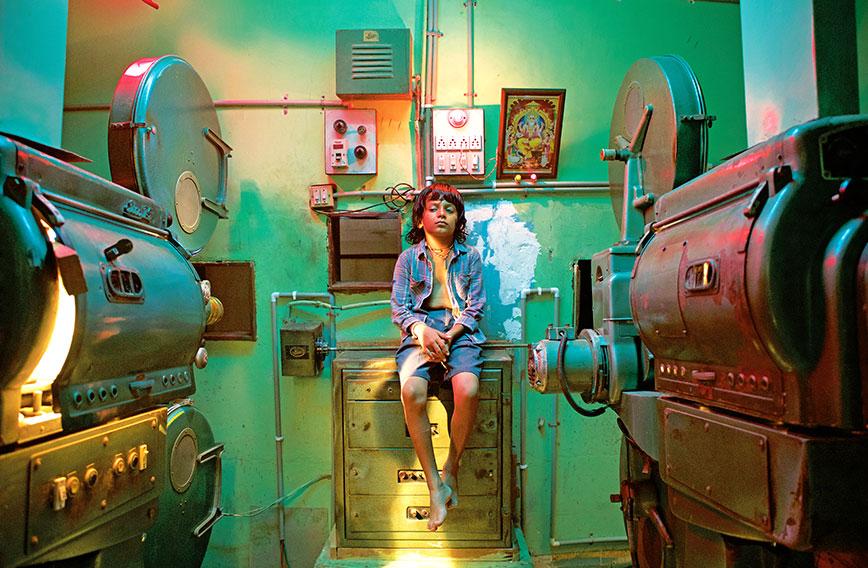 Pan Nalin's Chhello Show is inspired by his own childhood

It is the year of personal stories in film

IN early 2020, when Arun Karthick’s critically acclaimed Tamil film Nasir was making waves at the International Film Festival of Rotterdam (IFFR), FTII-trained sound designer Nithin Lukose was in the midst of the shoot of his directorial debut, Paka: River of Blood, in his hometown in Kerala’s Wayanad district.

A year and eight months later, Paka: River of Blood  premiered at the 46th Toronto International Film Festival (TIFF, September 9 to 18), continuing the good run that Indian independent cinema has had thus far in terms of global exposure during a protracted pandemic that has spared no country.

In an unsettled period that saw multiplexes across the world pulling down their shutters, streaming platforms moving into the breach, and festivals going hybrid or entirely virtual, Bollywood and Hollywood blockbusters all but disappeared from sight. A steady stream of deeply personal films from directors working outside India’s mainstream industry has, however, helped the world’s largest movie-producing nation stay firmly on the international radar.

Between Nasir and Paka: River of Blood, and between the 77th and 78th editions of the Venice Film Festival, one of Europe’s ‘Big Three’, India has had Chaitanya Tamhane’s The Disciple, Ivan Ayr’s Meel Patthar, P.S. Vinothraj’s Koozhangal, Pan Nalin’s Last Film Show, Irfana Majumdar’s Shankar’s Fairies, Aditya Vikram Sengupta’s Once Upon a Time in Calcutta and Ritwik Pareek’s Dug Dug play in the world’s major film festivals.

While several of these films are by first-time directors, almost all of them have sprung from very personal impulses and spaces. Lived experiences yield insights that have a way of travelling far and wide. No film reinforces that belief as strongly as Chhello Show (Last Film Show), Pan Nalin’s Gujarati film completed in the middle of the ongoing pandemic.

Nalin is, of course, the most seasoned of the Indian filmmakers in the above mix. Chhello Show premiered at the Tribeca Festival in New York, an entirely physical event held in June. The semi-autobiographical story of a nine-year-old boy from a remote village on the edge of the Gir forest who discovers the magic of movies in a period of great transition has instantly touched a chord.

“Chhello Show,” says Nalin, “is directly inspired by my childhood and the people I knew as a kid.” He is, however, quick to add that the decision to turn the spotlight on himself did cause some turmoil in his mind. “After all, who cares how I grew up? But with the disappearance of 35mm films and the arrival of the digital era, I felt maybe I should tell the story of how I first encountered cinema, what it did to me, and how it turned my life upside down,” he says.

“Years ago, it was an era of cinema, when phones were not smart, the Net was not Flix, the box was not an office and the movies were not content,” says Nalin. “These are strange times for someone who grew up loving cinema…. The more writers and directors we train in the film schools the more we are flooding the world with manufactured emotions….”

Chhello Show is obviously Nalin’s response to the “deeply saddening” commodification of cinema — it is an ode to the purity of the medium seen through the innocent and inquisitive eyes of an adventurous village boy. The tremendous response that the film received at Tribeca was “a dream come true” for the writer-director of Samsara, Valley of Flowers and Angry Indian Goddesses.

“The idea had started germinating well before the pandemic hit us and luckily the production was wrapped up as the world went into lockdown,” says Nalin.

“It wasn’t easy,” he adds, “for an independent film like ours to go on during the pandemic. Every step of the way was affected by lockdowns and the budget went haywire. But once we completed Chhello Show, we decided we would premiere the film only in a physical festival, on a giant screen and in front of real spectators.”

Nalin achieved that end. The strategy has paid handsome dividends. Chhello Show has been picked up for distribution in the US by Samuel Goldwyn Films, in Japan by Shochiku, in Russia by Capella, in Italy by Medusa and by a slew of other companies in Germany, Spain, Portugal, Taiwan, South Korea, Turkey and Israel.

The uncertainties related to the coronavirus pandemic continue to dog Indian filmmakers but stories, mercifully, haven’t deserted them. In September 2020, it was possible for Tamhane and Ayr to travel with their respective films to Venice. This year, however, travel to Italy is banned for Indians. “I am not sure how it will go,” says Sengupta, writer and director of Once Upon a Time in Calcutta, which is in the 78th Venice Film Festival’s Orizzonti competition.

Sengupta, whose Asha Jaoar Majhe (Labour of Love) premiered in Venice Days in 2014 and won the Best Debut Film award, has, with his most accessible film to date, made the cut yet again at the festival that ‘discovered’ him seven years ago.

Everything in Once Upon a Time in Calcutta, says the filmmaker, has been derived from “first-hand experiences”. It is a plot-driven drama about individuals whose actions and mindsets add up to a piercing and poignant portrait of a city in constant flux.

“The film is about the city and it is about people… I wanted to capture the city through people and their mindsets, which is why I had to get into in-depth characterization and dialogue,” says Sengupta, “instead of getting into the lanes and the architecture of the buildings, the physicality of it.”

A former actress tries to break free from a past represented by a personal tragedy, estrangement from her husband and other regrets and resentments. A man wastes away, holed up in a theatre that has fallen into disuse.

“The theatre in the film is a real space where I interacted with the person who owned it. He lived all alone and in worse conditions than the character on the screen,” he says. That apart, Sengupta gives a literal spin to the state of the city and its people — a statue of a dinosaur that has to make way for a flyover to come up is a key element in the plot.

“I have been absorbing this city for years. It is my most comfortable zone. Grasping its texts, subtexts and layers comes naturally to me. Calcutta is home — the people, the spaces, the smells, everything is me, everything is in me,” says Sengupta. “The different characters in the film are from the same external world, but they have very different worlds within them. That is what I am interested in exploring.”

Debutant Ritwik Pareek, whose Marwari-Hindi film Dug Dug was part of TIFF 2021’s Discovery section, has also made his first foray into filmmaking with a story set in a world that he knows best. Inspired by Jodhpur’s Bullet Baba shrine where people offer liquor to the deity, the film is a satire about faith and its often bizarre and life-altering manifestations.

Says Pareek, a former ad agency art director and self-taught filmmaker: “It isn’t like a usual

satire in which irony is exaggerated for effect. In Dug Dug, the rural Rajasthan setting and the characters are very real, but the situations are such that it all feels surreal.”

“The storytelling,” says the Jaipur-born, Mumbai-based filmmaker, “is visual and there is very little dialogue in the film but it is funny (at least I hope so).” Interestingly, he attributes the self-produced independent film’s “grand sweep” to the inspiration he drew from spaghetti westerns. “I have been passionate about cinema since I was in school,” says Pareek. “I have been subconsciously training myself by watching films from around the world.”

Nithin Lukose’s debut film, too, is rooted in the director’s hometown, but his grounding in cinema happened in Pune’s Film and Television Institute of India (FTII). His film, Paka: River of Blood, based on stories his grandmother told him, homes in on a violent, inter-generational feud between two families that migrated from central Kerala to cold, misty Wayanad between the 1940s and the 1970s.

Paka: River of Blood, took shape in Lukose’s mind when he attended a Church festival in Kallody in 2019. “The next year, we filmed the climax at the same festival,” he says. The film was shot between mid-January and mid-February of 2020 with a mix of professional actors and amateurs from the town.

“This is the place where I grew up. I know the people, the culture, the river that runs through the town,” says Lukose, whose credits as a sound designer include the Kannada film Thithi and Dibakar Banerjee’s most recent film, Sandeep and Pinky Faraar.

He credits his film institute orientation for the shape his debut film has taken. Lukose says: “The film has a mix of what I studied in FTII, the films I saw and the notion of working with non-actors. These lie at the base of my desire to make something different.” But, above all, it is Adoor Gopalakrishnan who is the young filmmaker’s inspiration. “He saw the first cut and really mentored me during the edit process,” says Lukose.

First-time director Irfana Majumdar’s Shankar’s Fairies, which premiered at the Locarno Film Festival in August 2021, is based on the memories of the filmmaker’s historian mother, Nita Kumar, who has written the screenplay besides serving as one of the producers.

Shankar’s Fairies, set in early 1960s Lucknow in the home of a senior police officer, is an intimate portrait of a family, a newly-independent nation and a cloistered milieu. It sees the world from the point of view of a nine-year-old girl, Anjana, who forms a bond with a servant, Shankar, who works for her parents, having left his family behind in a village.

The girl’s imagination is ignited by Shankar’s magical stories of fairies and djinns and the film examines the world that she seeks to conjure up in her mind and create her own reality. But beyond the innocence and purity of a child’s understanding of the world, Shankar’s Fairies lays bare the exploitation entrenched in a social structure that divides master from servant, the rich from the poor, the adult from the child, and the city from the village.

Says Majumdar, a theatre practitioner based in Varanasi: “The film has been shot in the bungalow where I spent a lot of my childhood. This is where my grandfather retired. My mother spent her childhood in similar bungalows as her father moved from one small Uttar Pradesh town to another.”

In the pre-production phase, Majumdar worked closely with her husband, Gaurav Saini (actor and casting director) and her mother. “Once the first draft of the script was ready, we worked for two to three hours every day for three to four months to develop the idea,” she says.

The distinctive quality of Shankar’s Fairies — it is a film of a strikingly restrained timbre that couches its sharp critique of class schisms in a minimalist style — is doubtless a product of the process that enables the personal and the political to intermingle and yield much more than what is immediately visible on the surface. n