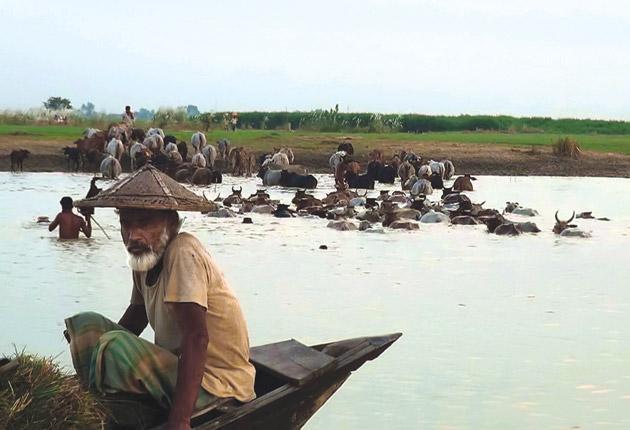 Ten years in the making, Char-The No Man’s Island, posed daunting physical and logistical challenges. But much like the mighty river that the film is about, director Sourav Sarangi found his way around the hurdles to come up with a film that is going places.

Char-The No Man’s Island, captures the many moods of a dramatic landscape on the India-Bangladesh river border while focusing primarily on the plight of its people, perpetually susceptible to the vagaries of nature and ill-advised development initiatives.

It is a searing critique of a big dam that has wreaked havoc as well as an empathetic anthropological study of an impoverished community displaced by soil erosion. The epic-scale documentary is informed with as much cinematic ingenuity as urgent emotional force.

Char-The No Man’s Island, a co-production involving India, Japan, Norway, Italy, Denmark and the UK, is making waves around the world. “The river never stops,” says 47-year-old Sarangi. “It flows on no matter what comes in the way. It simply changes its course when it is up against an obstacle. I had to be a bit like the river during the making of the film.”

Shot on the Indian side of the border, the project was hugely demanding on the unit. “It is the first long, elaborate venture of my career,” says the director. Access to the location was arduous at the best of times and transport facilities were rudimentary.

The island has no electricity and nobody is allowed on or off it after sundown. Sarangi had to keep riders on standby to ferry the camera batteries to the mainland for charging. And the cameras had to be set to night-vision mode after sunset for filming the villagers, which explains some of the film’s most striking images in which humans assume the contours of spectral creatures in a strange, dark nether world.

The citation of the 2012 Guangzhou Documentary Film Festival, which gave Sarangi the best director prize, acknowledged the enormity of the risks the filmmaker endured in bringing the plight of the hapless inhabitants of this no man’s land abandoned and forgotten by politicians on both sides of the border.

It read: “Director Sourav Sarangi paints a subtle but fearless portrait of the urgency of a group of people who belong to no one… desperately in need of a deeper stability as the earth they inhabit literally disappears beneath their feet. This is a story that, like the island itself, may have been lost without his inquisitive eye and courageous camera.”

Not an iota of exaggeration there. The 150-sq-km island where Sarangi filmed is inhabited by tens of thousands of people whose lives are a daily struggle for survival. Smuggling of rice, cows and banned cough syrups is their only means of livelihood.

This barren patch on the Ganga is controlled by the border police of both countries. Its occupants are sitting ducks for the trigger happy, like 10-year-old Sofikul Sheikh’s father, killed some years ago by security forces while trying to smuggle cows into Bangladesh.

Although the film’s “principal character” is obviously the omnipresent river, it is the Ganga’s timeless and ever-shifting relationship with the people that Sarangi explores. The focal point of Char- The No Man’s Island is 14-year-old Rubel Mondal, who was only four when erosion wiped his village off the face of the Indian map.

“The river gives back what it takes,” says Sarangi. “The land that was lost resurfaced as an island called Char.” The homeless rebuilt their dwellings according to the old alignments – those that were neighbours in the submerged village became neighbours on the new island as well.”

The spirited Rubel now lives, along with hundreds of uprooted families, on the island that emerged in the riverbed a few years later. Sofikul is his neighbour. The two boys help each other out on their dangerous sojourns across the border with their contraband. Life hangs by a thread here and death is a bullet away.

The story of Rubel sums up the plight of these people. He wants to cross the river and go back to his school in India but is forced by circumstances to frequently travel in the opposite direction to smuggle rice to Bangladesh for a living.

“It took me a while to zero in on Rubel,” says the filmmaker. “But once I was introduced to him, I knew that he would be the voice of my film. He was good at his studies but he cannot go back to school anymore. He has to earn a living for himself and his family. He is only a boy but is very mature, intelligent and blessed with a sense of responsibility.”

Sarangi first saw the effects of soil erosion in 2002, when he travelled to the village of Pasrashpur in Murshidabad, across the river from Bangladesh’s Rajshahi district. “The village vanished before my eyes over a period of time,” he recalls. “Trees, buildings, roads, temples, mosques, everything crumbled and disappeared into the water.”

He captured what he saw on a digital camera. “I would go back every year to the edge of the village shoot as the villagers lost their land, one bit at a time,” says Sarangi.

Since the Farraka barrage was commissioned in the mid-1970s to control the river and benefit the people of the area, it has yielded exactly the opposite result, says the filmmaker. “The landscape has changed completely, and so have lives,” he adds.

In his director’s note on the film, Sarangi describes the disintegration of an entire village thus: “You notice a small crack on the ground; the thin line widens, the grassroots still trying to cling together, and after a while the piece of earth where you stood minutes before jumps into the river with a splash. And sometimes it simply goes down in silence, in slow motion. The land is consumed much like a prey hypnotized by a recoiling anaconda…”

The villagers themselves, according to Sarangi, tend to use the metaphor of a snake to describe the river that has, in Hindu mythology, been associated with powers of healing and cleansing. Since the construction of the Farakka barrage, the Ganga, the villagers told the filmmaker, “has turned into a snake caught at her neck by modern technology (which)… for survival strikes back and forth to take away everything she gave us…”

But the river is all they have. “These people cannot turn their backs on the river. It is a part of their beings, so they coexist with it. They do not migrate to the city because it has nothing to offer them,” says Sarangi.

The surface reality of the changing landscape and the lives that depend on it isn’t what interested him in the first place. “I wanted to probe the minds of the people who were displaced, peep into their inner realities,” he explains. “So I have no interviews in the film. I only have conversations.”

The film is, in essence, a blend of cinema verite principles and authorial intervention, of reality blended with interpretation that reflects the mind of the filmmaker himself.

Indeed, like the river it was filmed around, Char-The No Man’s Island has multiple facets, each flowing into the other almost imperceptibly.