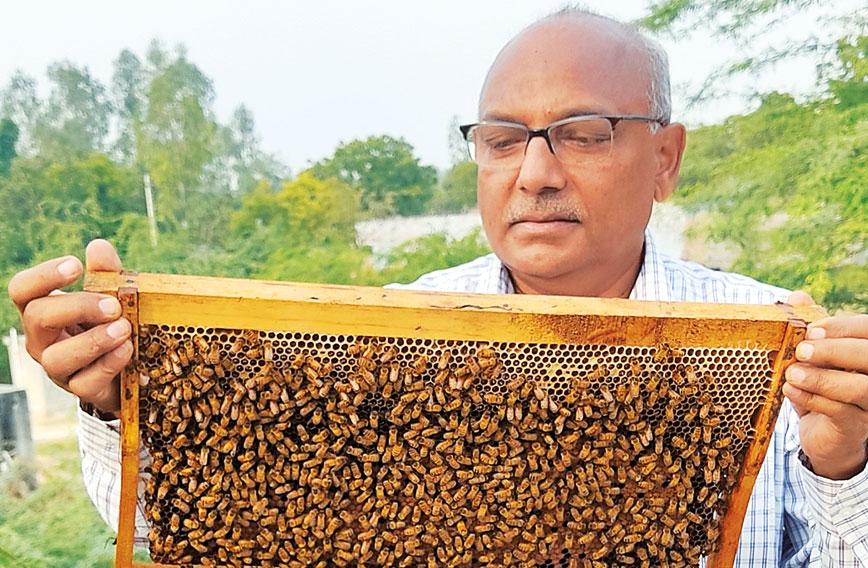 Rakesh Gupta conducts a workshop on beekeeping in Sunder Nursery

A Sunday with bees: Beekeeper shares his world

YOU may have heard of bees migrating with the changing seasons but a person migrating with his bees is surely a rare occurrence. Rakesh Gupta, a 62-year-old beekeeper from Lucknow, travels with his beehive-boxes across India. He migrates with them to orchards in Kashmir, the coasts of Gujarat, the high altitudes of Himachal Pradesh, to Uttarakhand and to Rajasthan. Recently, the bees and Gupta visited floral fields in Lahaul and Spiti valleys in Himachal Pradesh.

The wooden beehive-box is a ventilated and layered box with frames for bees to make their hives. An entrance reducer protects the bees from intruders.

Gupta, who has an MBA, decided to leave the corporate world in 2002 and took up farming around Lucknow instead. It was in 2004 that he began beekeeping. After a lot of experimentation — understanding bee behaviour, taking care of his own hives — his commercial effort changed into a passion.

“I hope to raise awareness about the bee, who is a very misunderstood insect. I also want to meet like-minded people who might want to start beekeeping too,” says Gupta. His wife, Poonam, set up the Golden Hive Foundation, a trust, to help spread awareness about saving the bee through workshops, like the one we attended at Sunder Nursery, and to mentor responsible beekeepers.

Golden Hive Foundation and Gupta are working with the Aga Khan Trust for Culture at Sunder Nursery to help keep the bees in the nursery safe and thriving. They are creating a healthy bee ecosystem with artificial hives and natural hives below the ground. Gupta highlights the need of abundant flora for bees. The foundation manages a small demonstrative apiary and creates awareness about the depleting population of bees.

Responsible beekeeping includes ensuring that nectar flow is available for the bees. Maintaining the right type of flora is key. While migrating, in case pollen or nectar are scarce, it is important to help the bees access places where such resources are abundant, which is why Gupta travels with his bees far and wide.

Travelling with the bees can be tricky. You can’t catch a flight or hop on a train. You have to travel by road in a car or truck. Making sure that all the bees return to the hive before it is packed for travel is crucial. The beehive-box can only travel during the night. As soon as it’s morning, the bees need to be released. Gupta and his team halt their journey during daytime and wait for the bees to return before continuing.

In October, Gupta held a workshop called ‘Know the Bee’ at Sunder Nursery to raise awareness on the vital role played by bees as pollinators in the ecosystem.

To understand the difference between flavour-infused honey in markets and the natural taste of honey from nectar collected by bees, everyone attending the workshop was given a small jar of lychee honey with a sweet and fruity aftertaste.

The taste of honey depends on the flowers the bees flit among. Some honey can be multi-floral honey while others may be sourced from a single type of flower or be mono-floral. The Asiatic bees or Apis cerena is the honey bee native to India.

The nectar collected travels in a pouch inside the bee’s body called the ‘crop’. There the enzymes of the bee act on the nectar till it is transferred to a younger receiving bee at the hive.

The group discussed the type of honey sold in the market and the unsustainable practices of sourcing honey. Mainstream honey from big brands is usually heated or boiled before packaging, which weakens the enzymes inside. Instead, leaving it in the sun for a while helps.

Honey in the market also goes through moisture reduction units and vacuum filtration, both of which reduce the existing nutrients. This is because raw honey is extracted from the hive early, and is high in moisture. Honey should be allowed to age inside the hive before harvesting for the best taste and nutrients.

Depending on the flower, honey can turn solid in colder temperatures or become white. Gupta showed us crystallized mustard honey as an example. Harvesting honey from the hive without destroying the comb and ensuring that enough is left for the bees is also an important practice in sustainable apiaries. With diagrams, the anatomy of the bee was explained: where the pollen is collected, the nectar stored, and how the honey is made. The various enzymes in the bodies of worker bees help make the honey.

Gupta explained bee hierarchy in the hive and the making of a queen bee. Worker bees feed royal jelly to a larva to make it a queen bee. The royal jelly changes the larva and allows it to grow with reproductive organs as a queen bee instead of a female worker bee. The process usually takes 16 days. The queen, with a long life span of three to five years, rarely leaves the hive and has a smooth stinger. The queen decides whether the hive needs more worker bees, resources, or drone bees.

Bees can migrate upto twice a year, usually with the changing seasons. Some bees only leave the hive at an exact 18 degrees Celsius.

Bees have interesting behaviour too! Worker bees leave the hive themselves if they are not contributing much and work from their first to last day. They can also choose to create a new queen with their royal jelly if they are dissatisfied with the existing queen — in a way, democratically electing a monarch. Usually, multiple queen bee larvae grow in a hive. The first queen to emerge from the sealed cell sends out a signal to the workers to kill the other queens. Most workers follow orders, but some bees may leave as factions with their new queen bee. “Mother-daughter queen bees can co-exist for a short while before the daughter creates another colony, but sister queens rarely survive in the same colony,” explains Gupta.

Drones (male bees) do not collect pollen or nectar. Their role in the hive is of reproduction, and they depend on the worker bees for survival. Drones usually mate with a queen bee of another hive mid-air in what are known as ‘congregation areas’ away from the colony. In these areas multiple drones, ranging from five to 19 in some species, mate with the queen and die directly after. Drones are also the first to be kicked out of the hive in case there is paucity of food and resources.

A quick look into a beehive-box helps to understand the busy settlement. You can see pollen baskets being filled, nursing of larvae, and sealing of the hive taking place rapidly in a maze of narrow corridors. Any points of entry are blocked off by resin, allowing only bees to enter and blocking other insects.

Rock bees or Apis dorsata make their hives in the open. They are the ones you often see on trees or under bridges. Apis mellifera or European honey bees prefer building their hives in confined spaces, making them perfect for beehive-boxes.

Bees have a sharp memory. They remember nectar routes and the location of their hives. “If you move the beehive-box a few feet to the left, the returning bee will wait at the previous spot of the hive.” says Gupta.

Hoping to provide mentorship in beekeeping, Gupta took it on himself to facilitate responsible beekeeping. “When I began, I had little to no guidance. In theory, beekeeping is very different from the practicalities,” he says. So far, he has helped five individual honey brands set up sustainable beekeeping.

While widely known for their honey, only 10 or 11 species out of thousands of bee species produce honey. The others are integral to the ecology as pollinators.

“The bee is the best pollinator out there,” says Gupta, who explains that some beekeepers are hired by orchards to help with pollination.

If you find yourself near the small amphitheatre at Sunder Nursery, pay a visit to the goldenrod

flowers nearby. From afar you will see a beautiful set of yellow flowers. Get closer and the bush buzzes with activity by small stingless bees with the classic yellow and black stripes. They collect millions of orange pollen grains on their hind legs which quickly turn into pellets that are visible to the eye. The stingless bee is approximately 80 million years old and plays a key role in pollination.

On the walk back to the small amphitheatre, Gupta tells us about ‘floral fidelity’. A bee will visit only one type of flower on a foraging trip to collect nectar and pollen due to high sugar nectar and pollen preferences.

Not only do you learn all about bees and beekeeping at the workshop, you also acquire a more sophisticated taste for honey. There was a honey tasting session too. According to Gupta, wild thyme honey is an acquired taste but everyone chimed in to declare it had a lovely minty flavour.

A diverse audience of 20 people attended the workshop. They ranged from people who study insect behaviour and volunteers interested in apiaries from Give Me Trees Trust to bankers, engineers, and writers.

“We come to the organic market at the nursery on weekends, so we decided to pay a visit to the workshop after we saw the poster on Instagram,” says Joseph, who does marketing for a start-up and attended the workshop with his father who works in the IT sector.

Some decided to stop as they were passing by, including a family with two young girls excited to see bees in action.

The workshop closed with an activity — participants made foot cream with beeswax, camphor and oil, which they took home.

Gupta ended his session with an appeal to save the bee from the dangers of exploitative honey harvesting, deforestation, and pesticides. “Bees are perfect indicators of a balanced environment. To ignore them or remain silent observers to the systematic massacre of bees is a catastrophe waiting to happen,” he says.

You can reach Rakesh Gupta at goldenhivefoundation@gmail.com to talk about bees. You can also get a jar of honey from him on WhatsApp or call +919415081718. We strongly recommend the lychee.