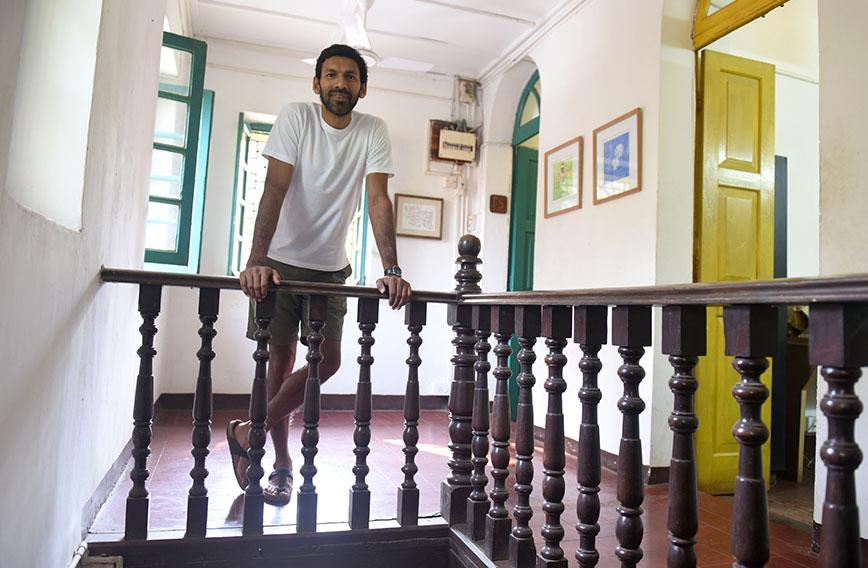 Goa is practically littered with mesmerising houses and government buildings that hark back to 450 years of colonial rule. So great was the dominance of western architecture in shaping urban and, to some extent, rural landscape that local architecture was completely overwhelmed. But thanks to the efforts of the Goa Heritage Action Group (GHAG), about 60 houses, known as Raj-Angonn or courtyard houses, with basic plans based on indigenous ideologies that pre-date the arrival of the Portuguese have been listed.

Research conducted by GHAG focused on understanding the arrival of the courtyard in Goan architecture, documentation of these houses and creating awareness of the culture and heritage associated with them.

Elaborating on the survey of these houses, Raya Shankhwalker, honorary secretary of GHAG, said: “There has been so much prominence of Indo-Portuguese architecture that in many ways we have lost track of vernacular heritage. The courtyard houses of Goa are a unique form of climate adaptive architecture. Our intention is to create a visiting circuit because locked up in these houses is a wealth of art and artifacts which have been relegated to the fringes for far too long.” 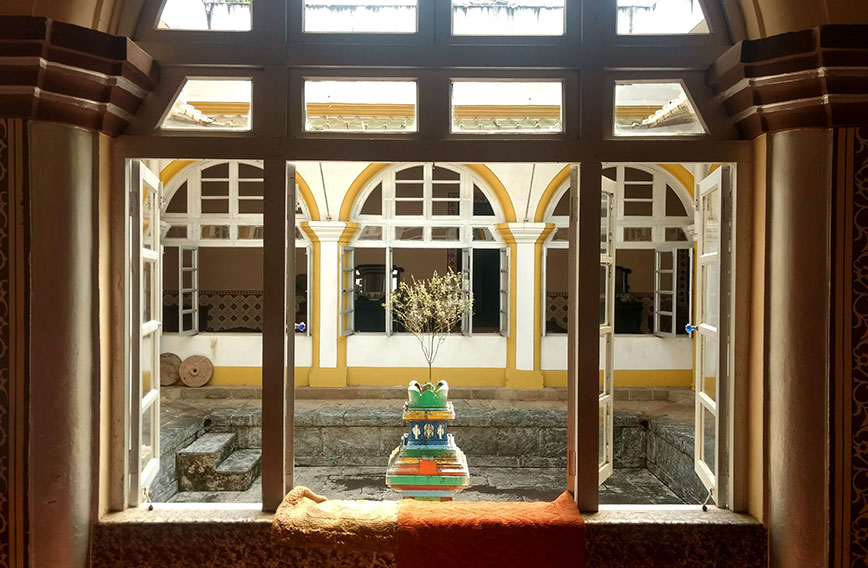 Window into the past: Some courtyard houses predate the arrival of the Portuguese | Photograph by Sagun Gawade

Many of these houses may have been built during the Portuguese time while some of them may have a history that predates the arrival of the Portuguese. However, the basic plans could be centuries old even though the embellishments do have certain western influence.

“The key reasons for surveying and documenting these houses is that it is a part of Goa’s heritage and we were keen to show how Goa has an indigenous architectural style that predates the Portuguese,” said Shankhwalker.

According to a study paper by Arpitha Shreedhara for GHAG, the houses surveyed are between 150 and 450 years old and a few of them have gun holes in their external walls. “In many houses, the attics are literally filled with old documents, furniture, weapons used during the wars, paintings and photographs depicting important historical events, etc.”

The survey of the Raj-Angonn houses is one of the many efforts of GHAG to bring about awareness of heritage and the compelling need to protect it. Formed in 2000, at a time when it was difficult to get the required nine persons to form an NGO, the group has grown, and more importantly, it has succeeded in creating awareness about the need to protect heritage.

This massive exercise by GHAG was undertaken with its own resources to prove that it could be replicated in other cities, towns and villages. Unfortunately, the state government did not take cognisance of the list, nor use it to initiate listings in other parts of Goa.

The book became popular and three years ago the group decided to revisit the book with a more comprehensive listing with interactive walking maps. The new book, Mapped Heritage of Panjim, contains a list of 907 structures in the city alone. Lamented Shankhwalker, “In the last decade or so, around 125 heritage buildings have been demolished.”

Although the state government is yet to frame heritage regulations, there are indications that it is in the process of formulating a heritage policy and has initiated the process of listing heritage structures. However, it is surprising that GHAG, which is a key stakeholder, has not been asked to participate in the process, which according to Shankhwalker is “shrouded in mystery”.

The group, which was the brainchild of Heta Pandit, began with an effort to create awareness through art and heritage festivals and the Fontainhas Art Festival, held in the Latin quarter of Panaji, became quite famous because it created an interface between artists, house owners and citizens.

When the international film festival of India came to Goa for the first time, there were plans to demolish the Goa Medical College main building which is a heritage structure. Intervention by GHAG stopped this and instead, it was upgraded and, but for the theatre, the complex where the festival is held comprises heritage buildings.

At some time in the past, the Panjim corporation toyed with the idea of creating an amusement park in the main garden. The plan never saw the light of day thanks to the efforts of GHAG.

Explaining the raison d’etre of the group, Shankhwalker said, “What sets us apart is that we never believed in conventional activism. We believed in soft activism which meant engaging with the government, creating awareness through art festivals and filing public interest litigation when necessary. And the success rate of this position has been very high.”

The key to heritage preservation is first understanding the main benefits. “Conservation of heirlooms or our history is the key responsibility of a civilised society. It is important to conserve what was built by previous generations and transmit it to future generations,” says Shankhwalker, adding, “today in Europe the core historic centres of cities are much sought after by tourists and this cannot be recreated.”

Through the Fontainhas Art Festival, GHAG tried to push forward the idea of creating a development model for the heritage areas with people at the centre. “We need to enhance life in these areas so that people stop closing their houses and leaving or selling them to builders, because people are the soul of the place,” he explained. Through this festival, the group generated more awareness and more hotels and restaurants opened in the area.

Recently, GHAG embarked on another research project on Kaavi art which adorns several places of worship and houses in Goa. It is a unique art form in which lime plaster on walls is etched and a red earth-based pigment is used to create art. Documentation is completed and publication of a book is expected to follow.

The past 18 years have not been smooth for the group. After the flurry of activity which marked the first seven years of its existence, it went into hibernation. “I personally had to take a break to drive personal growth which had taken a back seat,” said Shankhwalker.  Since then, the organisation had been shrinking and rebuilding started two years ago. But the original force which drove GHAG is still alive and ticking and the research projects on Kaavi art and Raj-Angonn houses is proof that it has not lost its soul.