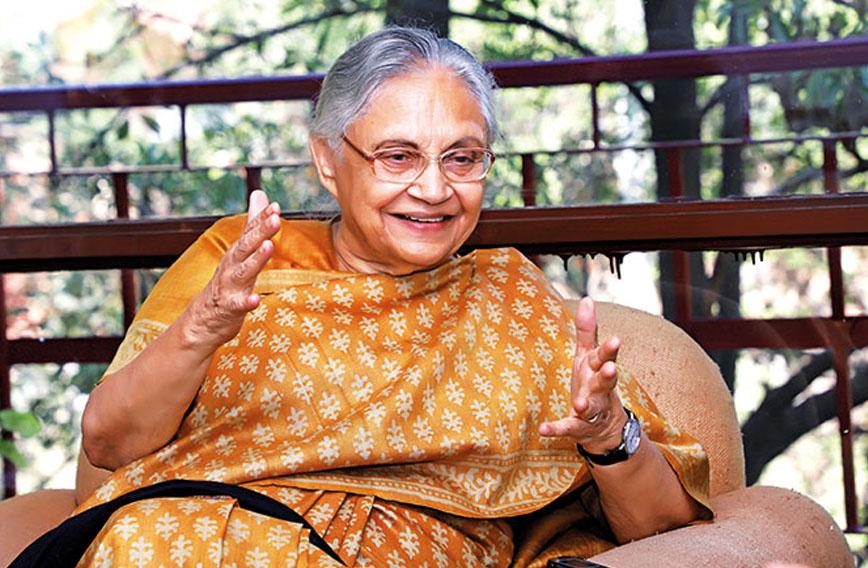 Sheila Dikshit: ‘You have limited land, limited powers and the responsibility of handling the capital of the country’

‘When you are in govt, you can’t afford to be defiant’

Governance in Delhi over the past three years has come to resemble the traffic on the capital’s roads — slow-moving and stressful with frequent shouting matches. The Aam Aadmi Party (AAP) and the BJP have been at each other’s throats with the Congress doing its bit to keep tempers rising.

A low point was reached recently when Chief Secretary Anshu Prakash, the capital territory’s topmost bureaucrat and a mild-mannered man, was summoned to the chief minister’s house for a meeting at midnight.

Prakash says he was roughed up there by AAP legislators and AAP denies it. The police have been investigating Prakash’s complaint. But a meeting at midnight? How normal is that?

The entire problem seems to stem from the unique status Delhi has as the capital city. The state government’s powers are limited. Only a constitutional amendment can change that and it is unlikely to happen. Till then a balancing act is needed with a lot of accommodation on all sides.

Sheila Dikshit pulled it off well for three full terms as the Congress government’s chief minister. She too had a BJP-led NDA government at the centre for one of those three terms. But she managed effortlessly.

To find out what her mantra was we tracked her down in retirement in her elegant home at  Nizamuddin East, a posh neighbourhood in Delhi. Excerpts from the interview:

There appears to be a logjam in Delhi between the administration and the ruling party, resulting in a breakdown in governance. You were Delhi’s chief minister for three consecutive terms. How do you see the present deadlock?

Delhi has a lot of advantages because it is the capital of India. Both the central government and the state government are interested in making Delhi a really world-class city. We had almost achieved that during our 15-year term.

The face of the Delhi government is the chief minister. It was Sheila Dikshit in the past and today it is (Arvind) Kejriwal. But people don’t realise the Delhi government has nothing to do with law and order, that it is the central government’s responsibility. We took the entire flak for the Nirbhaya case. We were made responsible and punished for it.

We couldn’t say very much at that time because it was a Congress government at the Centre. There wasn’t any point in saying we had nothing to do with law and order. People expect the chief minister and the Delhi government to take care of whatever has gone wrong.

We worked in rather difficult circumstances. In Delhi, law and order was good. But with one case, the Nirbhaya case, it was all forgotten. One of the reasons we lost the elections was the Nirbhaya case.

Delhi is a complicated city. Its demographic profile is constantly evolving. People come in from all parts of the country, from Uttar Pradesh, Bihar and the Northeast as well. It’s not like this population has been settled here for a long time. Mostly, more people move into the city rather than leave it.

So that is another challenge the Delhi government faces. You have limited land, limited powers, and the responsibility of handling the capital of the country. You have the diplomatic corps living here. They are the ones who send photographs of Delhi all over the world and say this is what the capital of India is like. It isn’t an easy place to administer. You do have powers but they are very restricted.

During your three terms as chief minister there was no confrontation with either the bureaucracy or the central government. Is it really a structural issue?

If you want to do things which you are neither supposed to nor expected to do and you don’t have a congenial relationship with the Government of India (GoI) then I am afraid it’s not going to work.

I remember, during my first term as chief minister, the Atal Behari Vajpayee government was ruling at the centre. Yet, at that time, we got in
CNG, the Metro, we privatised power, we did so much. When you are in government you can’t afford to be defiant. You have to work within the framework that you have.

How difficult was it for you, given the limitations you had, to work with the bureaucracy?

It wasn’t difficult at all. Please remember — you fight an election to get into government. Governance is in your hands. You are going to make policies. Who implements those policies? Not the elected government. It is the bureaucrat. If you are in conflict with the bureaucracy, how do you expect your policies to be implemented? You are only a decision-maker where policies are concerned. Implementation is carried out from the secretary to the clerk in the government.

During your 15 years in office did you get the feeling that you were in a structure where the bureaucracy actually reported to the centre? I mean, they could thumb their noses and say they could go above your head.

No, not at all. Say, the bureaucrats brought a particular file to me. It would then go to the Lieutenant-Governor (LG) who is appointed by the central government and represents it. The central government does not look at our files every day. It is the LG who does that job.

Believe me, not once did [Vijai] Kapoor or anyone have any differences with us. I would have a weekly meeting with the LG and tell him, 'This is what we want to do, can we go ahead?' He would say yes or he would suggest we do it differently. I would take the LG into confidence. You can’t have a government in conflict with the bureaucracy and the central government because then how will you govern?

But there is a feeling that the central government has been much too tough on AAP and gone out of its way to make them miserable. Do you think it was tougher for you?

Look, they have made it tough. It is about how you deal with the situation. If you are supposed to sit on this chair you will have a particular posture. Then, if you want to sit on a straight chair your posture will be different. You have an LG who has been appointed by the Centre. He’s got his powers. He is chairman of the Delhi Development Authority (DDA) which plans Delhi. You have to work within the framework you have.

Are there things within this framework you would sincerely advise the country to change?

Is there anything else?

Well, you cannot go beyond the Constitution. We did try to change some things. But then Vajpayee called an election so the changes fell off the map. But we worked efficiently. The Metro project was just lying in the boxes of the government. We came in then. We coordinated with the central government. So if a jhuggi dwelling had to be moved because it was standing in the route of the Metro, we moved it. We didn’t say we won’t do it. You have to understand the special nature of the Delhi government.

The other sticking point is the civic authorities. The quality of life in the city is determined by what is happening in the municipalities. Do you see any alternative to the present arrangement between the Delhi government and the municipalities?

See, we trifurcated the Municipal Corporation of Delhi (MCD) because we thought one commissioner for this large city with its huge population wasn’t good enough.

How is one commissioner going to handle everybody’s requirements? But I must say that the MCD and the Delhi government worked together. We gave them funds. The rest of their job is quite clearly laid out.

But this is the administrative set-up all over the country. The municipalities don’t do the best work. You don’t, as a government, have a political hold over them.

One punishment you can give them is to tell them you won’t give them money. How will they pay their employees then?

So would you say the relationship between the Delhi government and the municipality is no different from any other state and it’s really a question of collaboration?

Yes. See what happens in Mumbai. You have the Shiv Sena on one side and there is constant conflict. Where does conflict lead? You are meant to govern. You chose to go into an election because you want to govern.

You are still remembered as Delhi’s most successful and charismatic leader. What do you think was the reason you were defeated so badly?

I feel I wasn't vigilant enough. I didn’t take Kejriwal seriously. I thought the citizens of Delhi would know that they can’t get free water and free electricity. I gave them that much intelligence. By the time I woke up, the elections were seven or eight days away. Many members of my party told me to promise free water and electricity. I refused. I said it’s not a promise you can keep. I mean, we are already the cheapest power distributing city in the country. You don’t want to pay for anything and then you want top-class services. Then there was the 2G scandal of the central government.

And the Commonwealth Games?

The Commonwealth Games were one of the most successful in the world. The Shunglu Committee was put up in too much haste. Has it found anything? Nothing at all. And nobody appreciated the hard work the municipality, the Delhi government and the central government
put in to make the Commonwealth Games a wonderful event.

When they announced my name at the opening ceremony there was huge applause. I thought I am done for. I mean 100,000 people had worked for this. But the government panicked. Not even one of them was thanked. I felt very disturbed. The Commonwealth Games did a lot for Delhi. It was an opportunity for the city to grow up. We did so much and then scolded ourselves for doing the right thing!

Do you think the campaign against corruption was an exaggerated one? Why didn’t you and the Congress party do something to counter it at that point?

I think, frankly, the party did not give us the kind of support we needed. It wasn’t support only for us but for the party too. After all, the central government was also involved. The Commonwealth Games weren’t done just by Delhi but by India. I think the central government was a little shaken by the 2G scam. The success of the Games got drowned out. Then the Nirbhaya case happened at about the
same time.

Civil Society featured you as an activist CM in our magazine in its second issue. You saw NGOs and RWAs as partners in governance. Yet the social sector turned against you. Do you regret your interactions?

With all humility, I tried to do everything that I thought a democratic set-up ought to do, which meant getting people involved. Sometimes it was at the cost of upsetting our MLAs and MPs. They wondered, why does she go directly to the people? But it turned out to be a good decision. I think there was a sense of fatigue among people. Nobody spoke about bad work.

Your government was inclusive. Yet when it came to things like resettlement of evicted slums why was it difficult to carry it out in Delhi?

I have analysed this. You need space in the city. There are more people from UP and Bihar here than the original Delhiwallahs. I did think of making multistoried buildings for workers but it wasn’t feasible because the DDA would not allow it.