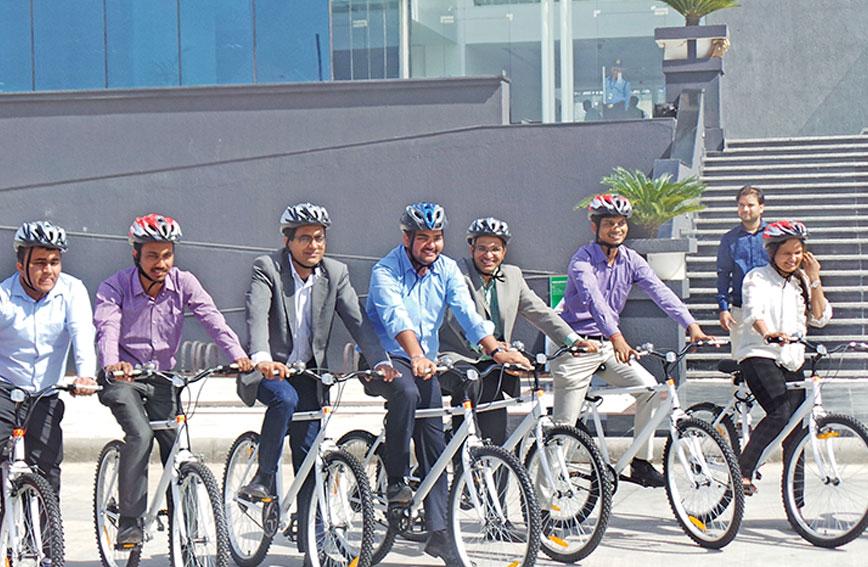 ‘Gurgaon can be a walkable, cyclable city one day’

Gurgaon’s rapid growth has come with wide roads, lots of cars, gated communities and shopping malls. It is the exact opposite of the evolved urban experience elsewhere in the world, which is defined by mixed land use, integrated transport, low emissions and inclusiveness.

India’s fastest growing and newest city is, in fact, out of date in the priorities it has chosen for
itself. But can it be reinvented? Can the clock be turned back?

There aren’t many who are ready to give Gurgaon half a chance because its problems seem to have shot out of control. Garbage, traffic, drainage, foul air, crime, water — you name it.

But there are also those who are solid believers that change is possible and they aren’t giving up. They think the right trigger can make all the difference. When cities like New York have gone through transformations, why not Gurgaon?

Among the believers is Manas Fuloria, CEO of Nagarro, a software company. He’s been cycling to work every day and encouraging Nagarro’s thousands of employees to do likewise or at least use carpools.

As the Chairman of NASSCOM’s Haryana Regional Council, he has also brought the World Resources Institute (WRI) and the Haryana government together for Vision Zero, an initiative which seeks to eliminate deaths in road accidents.

The idea is that if road accidents can be eliminated through urban design and traffic engineering, and space can be created for pedestrians and cyclists, a great many other changes can follow. People can actually begin to envision life in a city differently.

Civil Society spoke to Fuloria on Vision Zero and what he believes can be achieved.

NASSCOM is teaming up with WRI and the Haryana government for Vision Zero. What is this all about?

Vision Zero is a concept that started in Sweden about 20 years ago and has since been adopted by major cities such as New York.

WRI recently introduced this concept to India with a conference in Bhubaneswar. We at NASSCOM Haryana have been pushing modern transportation-related topics quite aggressively, so we embraced Vision Zero as another means to the same end.

NASSCOM Foundation, WRI and the Haryana government are finalising an MoU which will have us collaborate across the state to bring down road fatalities dramatically.

The things that are remarkable about this Vision Zero approach are: (a) No road fatality is considered acceptable so all means are permissible to reduce them; (b) human error is no excuse for a fatality; (c) the focus is on the most vulnerable segments — pedestrians and cyclists, children and older citizens; (d) infrastructure design is a big area of intervention.

This seems like just another one of those ideas. You have had Raahgiri and car-free days and none of them has worked. How much of a chance should we give Vision Zero?

First, I wouldn’t say that Raahgiri and car-free days haven’t worked. While they haven’t yet led to a wholesale change in our urban transport paradigm, at least the conversation has changed. Pedestrianisation is being talked about increasingly — Connaught Place in Delhi is moving from a weekly Raahgiri to a three-month experiment with pedestrianisation.

The car-free days led indirectly to the odd-even experiment in Delhi and it at least made a majority of us see the link between private vehicles and air pollution. We have to be patient with the long arc of history in the making! All over the world, changes like these have taken a decade or two to really have an impact.

Still, if you are a cyclist in Gurgaon, you will agree that the way drivers treat you has changed, even if just a little. 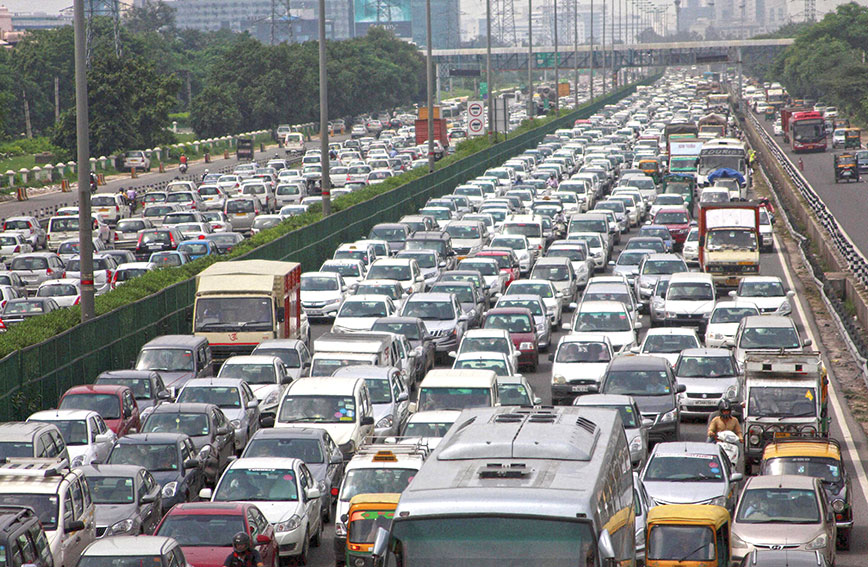 Are you saying that Vision Zero on road fatalities is the fulcrum on which a new approach to urban governance can be put in place?

I am not an expert on urban governance. But I do know (and have experienced) that the modern ideal of cities is one of walkable streets busy with footfalls, public transport, mixed use of areas, and so on. We have been going in the other direction: of segregated business, residential and market sectors, of gated communities for those who can afford them on one end and slums on the other, of highways in the middle of cities, of huge roads and huge parking lots in the heart of cities, of cities where it is unsafe to walk because everyone would rather take a car if he or she can afford it. And, of course, the lousy air.

We have tried to approach this from the point of view of walkability and cyclability (Raahgiri)
and public transport (car-free days). But Vision Zero, taken to its logical end, also makes cities
more walkable. So it is another approach to the same ideal.

So what you are saying is that when you get down to dealing with road fatalities, a whole lot of other systems fall into place and these collectively make urban governance and the urban experience better.

A disproportionate number of road fatalities are those of pedestrians and cyclists. Note that all public transport users are pedestrians for part of their journeys. So, ironically, we are putting in danger the users of sustainable transport options.

All the while we are cutting trees to widen roads to move cars along faster and even putting
up barriers to stop pedestrians from crossing city streets.

So a reorientation of our mindsets to prevent road fatalities in a sensible, modern way that puts pedestrians and cyclists first would eventually lead to a better urban experience. Take a look sometime at NYC’s key road projects (it’s on the web) – almost all of them have to do with better pedestrian and cyclist experiences.

All that you mention is serious stuff. It requires a high level of expertise. Currently it doesn’t exist in government.

Unfortunately, the level of expertise is indeed limited, both in terms of the broad concepts and in terms of the detailed interventions required. Also, people are not educated enough, and the media amplifies the myopic middle-class cry that “the roads are jammed so we need even wider roads”.

Speeding down these very same roads in non-peak hours causes a ton of fatal accidents, e.g. when pedestrians have to run across several lanes of traffic. This is why we have roped in WRI India and others to support the process.

We are going to hire a bunch of road safety associates and allocate each to a district for perhaps six months at a stretch.

They will collate historical accident data and also join first responders to major accidents to collect information in a modern, structured way. This data will be analysed by experts to come up with recommendations.

The really interesting question is how the government will organise itself to respond to these recommendations, but I am hopeful. Incidentally, this programme is loosely modelled on the Good Governance Associates programme that the Ashoka University is running with the Haryana government.

Not many people give Gurgaon much of a chance. It seems in too much of a mess. You and many other businesses are heavily invested here. What do you think?

For better or for worse, we are perhaps the embodiment of the new India. Unfortunately, we started off on the wrong foot, as an American-style car-centric suburb of Delhi rather than as a real city.

If we can embrace the modern city ideal we can go very far. I am happy to note that the government is gradually picking up on this theme, but we, as citizens, need to be far more educated and aware. I do hope Gurgaon can be a beacon to the rest of the country one day.

What is the role municipal administrations should play?

Municipal administrations need to embed the modern ideal of the city in their planning and execution. They need to invest in the infrastructure that supports this modern ideal (public transport, pedestrian facilities) rather than on the old stereotype of the American suburb (wider roads, gated communities).

At the more mundane end of things, they need to organise themselves to act on the recommendations of the Vision Zero experts to make city roads safer.