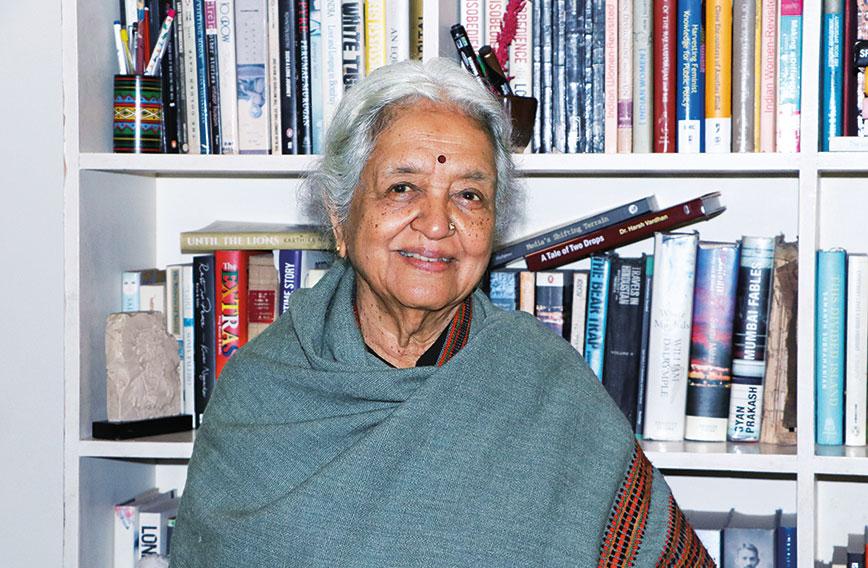 Devaki Jain: 'India could have been a torchbearer of how to make ourselves less poor without the North being on our heads' | Photograph by Shrey Gupta

'We must unionise women workers, speak for them'

The feminist movement has taken different turns over the years, but to remain relevant it needs to primarily address the situation of the multitudes of women who work in fields, factories, on streets and in homes. Ensuring rights and opportunities for them is particularly important in the face of the vicissitudes of a market-based, capital-driven economy. How can they be collectivised so that they aren’t left behind?

Devaki Jain, 85, has had a long record as an economist and activist seeking an alternative model of development. Hers is the Gandhian view of bottom-up growth, especially so when it comes to the empowerment of women. She was one of the first to explain to India and the world that economics was also about justice and equity and that it wasn’t gender neutral. She founded the Institute of Social Studies Trust in Delhi, the Indian Association of Women’s Studies and Kali Feminist Publishing House.

Two collections of her writings and speeches, The Journey of a Southern Feminist and Close Encounters of Another Kind, have been published recently by SAGE and Yoda, prompting Civil Society to seek her out for this interview.

What exactly is feminist economics and why is it important?

Feminist economics started by separating the roles determined by gender in the economy. For instance, a man would dig a field while a woman would sow paddy but she would get less wages. The idea was to basically address the inequalities between men and women. But now feminist economics has moved beyond that because I think women are beginning to organise themselves much more. There is an All-India Domestic Workers’ Union that has even got a law passed to protect their wages. We never had that in my time. All this happened because of the women’s movement. So that is an issue that needs to be talked about.

We are still looking at inequalities between genders. Women are not getting the right wages. They are not getting enough. But, they are now becoming spokespersons for themselves. The latest figures show that more women than men are voting in the elections.

Along with domestic workers, self-employed workers, home-based workers and waste-pickers are organising themselves into collectives. That was never the case in the 1970s and 1980s. At that time, we were still making the government understand that there was a difference between men and women and that women were not being treated fairly.

In your writings you question the idea of the Western model of development, including using GDP as an indicator of progress. What development model would you like to see in India?

I would be in favour of a labour-led, not a capital-led, economy. I am not left of left but I am very much for labour — wage for work, and by that I mean a mass-based programme. How do you reach the masses? Only through their labour and wages.

That is why Gandhi’s old ideas are still relevant. Of course, I don’t think everyone should have a charkha at home but Gandhi believed that every home had to earn something — at least Rs 2 a day — and he designed a system which was unbelievable. But Nehru was never really comfortable with that.

I am going to give a talk at Harvard University where I will speak on “Before Midnight’s Children”. I was 14 years old when India gained independence and 21 when I came to work in Delhi. That was the mid-1950s and the air in India was like Diwali. Everybody wanted to reconstruct India. There was a very strong CPI and CPI(M) but also a very strong Gandhi and Nehru.

The 1950s and 60s was the era when we felt we could build an India that was different from other colonies that had been liberated. That was Gandhi’s stamp and people came in hordes because of what we had achieved through non-violence. We were so excited that we could do something different. Cooperatives sprang up and Dr Verghese Kurien promoted his Amul cooperative at that time.

Up to the 1970s that worked. Then capitalism got hold of us. The blow came from liberalisation by Dr Manmohan Singh. It became all about lowering prices for exports and imports. Today, our economic growth model is no different from that of most other countries. India could have been a torchbearer of how to make ourselves less poor without the North being on our heads. Today, fluctuations in the economy depend on world trade and exports and imports depend on what happens globally. Now we depend on the World Bank, international capital and our own capitalists have become more muscular.

Does that mean you are not in favour of globalisation?

I have always been against globalisation. I think it took away the autonomy of all our countries, especially the less advanced ones, in shaping our own lives.

Economists worry about the falling numbers of women in the workforce.

Feminist economists challenge this idea. Formal statistics may show a dip in the number of women in the workforce, but we think a whole lot of women who are doing other work which does not come under the definition of the National Sample Survey Office (NSSO), are not being counted. People are doing so much analysis on why so many women withdrew from the workforce. There is one argument, that women withdrew because their husbands earned more so they didn’t need to earn. The other argument is that if you look at age distribution, women drop out when they are at a marriageable age.

But some of us feel that they drop out because of the lack of employment opportunities or they have found other avenues of employment. I argue separately that if we do what I call a class analysis, break it down to the better-off, less better-off, Dalit, you will find that this has not happened. Stratified analysis shows that among the Dalits this has not happened. This is one of the dangers of some statistics — it doesn’t do caste and class analysis. It only does gender analysis. You will agree that amongst the poor, women cannot afford not to earn. They are the breadwinners.

What kind of policies would help more women get into the workforce?

I believe in facilitating them wherever they are working as well as offering new jobs. There are two ways of doing this. Say, I am making garments in my home, how can I earn more? There are ways in which a self-employed seamstress can be helped. The bank and the system can help me with credit, help me to access raw material, help me to collectivise my work so that I have a market for my products.

Definitely, unionisation of workers, like the woman who bends her back to plant paddy, will help. There is nothing like a negotiating instrument.

The women’s movement has become bigger with bigger networks and so much energy. Today, I hear more women exercise their votes than men. But I still have a complaint against the women’s movement. We are not entering into unionising workers, though we talk about injustice and exploitation. It need not be a very big deal; it could be about bringing women together to negotiate for themselves.

This happened with the tea workers on a Kerala plantation who were refused a wage hike by the company’s owners. The workers went on strike and were able to get their demand fulfilled with the Labour Department’s help. Collective strength is important. This is a model of how women activists in India should engage with women workers who are at the very bottom.

But many feminists are preoccupied with what I call bodily injury — like violence, rape. In my time there were bigger issues about working women, not just women in offices, though the Me Too movement has given a huge profile to journalists, which is a good thing. Though we speak for the working class we don’t collectivise them or argue for them, by and large.

There are instances of groups like SEWA where women from the informal sector have collectivised themselves.

Let us not use the term informal sector, which is a catch-all term. SEWA’s members are self- employed women — vegetable vendors, fish sellers, women carrying loads. We call them all informal because they are not employed by any enterprise where there is a fixed wage structure. So they earn their own living. Now, is the State doing enough for them? These people are organising themselves and SEWA has provided that space, but not every place has that kind of organised space.

Inequality has risen since liberalisation policies were implemented. How do we bridge the rich-poor gap?

Last month, there was a table showing that more Indians have joined the top 10 most wealthy of the world list. I feel ashamed because we also have the largest number of poor people in the country. We have a large, hungry, sick and dying population.

There was a lot of pressure at Davos that there should be sharper taxation to cream some of that money into what can be called public expenditure. But the worry is that more wealthy people are putting their money into tax havens. We have to criminalise such people.

There has to be a moral imperative. Everyone is talking about Gandhi now. Gandhi asked all of us to support the services and products of the poor. The entire khadi programme hinged on that. I think that bridging inequality has to start with the complete rejection of the way we are going now. Consumerism is not something that can stop in my lifetime or yours. Maybe we are doomed to go that way and burn ourselves out. In the past there was a Gandhi or Vivekananda, but who can we turn to today?

What is your opinion of cash transfer schemes and MGNREGA?

The good thing about MGNREGA is that women get the same wages as men. In every industry, be it construction, handloom weaving or carpet making, women are paid less than men. Their work is considered lighter, but God bless those who designed MGNREGA.

There is controversy between those who feel that there should be a full public service facilitation of health, education, and childcare provided by the State, while the other side says give the poor Rs 100 a day and let them buy these services. The NITI Aayog and others are saying that cash is better because when we tried to deliver services it didn’t work. The schoolteachers didn’t come to work but would do private tuition instead. This is sad because it shows that human beings are incapable of nobility. It shows that the teacher won’t teach, the doctor won’t heal unless they get money even though they are paid by the State. I am not sure I like the cash transfer idea because services may still not be available to economically weaker sections.

There are steps for gender equality like panchayats, talk of 33 percent reservation for women. Are these good harbingers?

Panchayati Raj or local self-government was a very good idea and certainly gave power to both men and women in villages and local areas. But gradually the central government lost interest in its muscularity. The panchayats reduced the power of the bureaucrats and MLAs and they allowed it to die.  Money is not going all the way it should go. The design of development is not in the hands of the village or gram panchayat anymore.