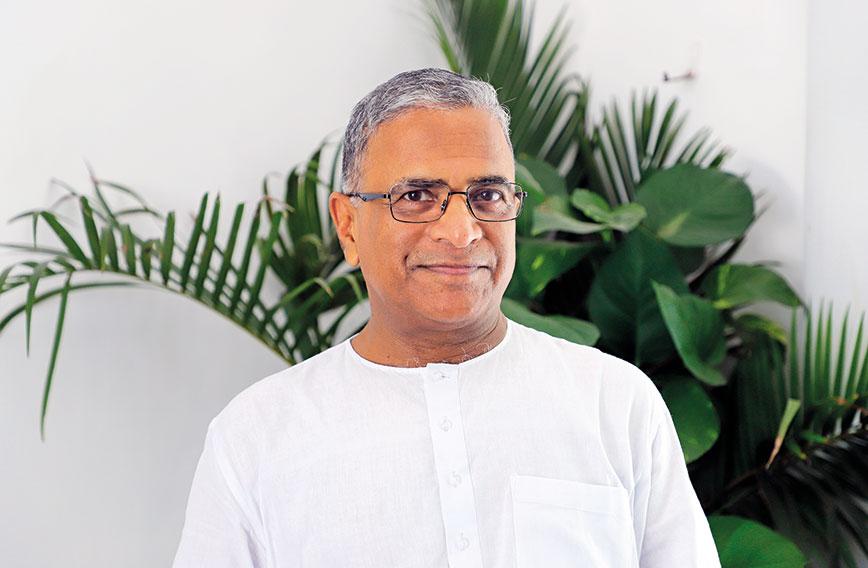 Harivansh: 'The question is how can good examples be large-scaled and replicated and systemic faults removed in MPLADS' | Photograph by Shrey Gupta

Members of Parliament get Rs 6 crore a year to spend on the uplift of their constituencies. It is called the MP Local Area Development Scheme or MPLADS. It is assumed they know best what is needed to be done. But over the years, MPLADS has come to be questioned — both as a scheme and how the money is being used.

It has been felt that there is scope for introspection and Harivansh Narayan Singh, Deputy Chairman of the Rajya Sabha, has taken the initiative to review the working of MPLADS. He is chairman of the MPLADS Committee in Parliament and in this capacity hopes to build a consensus on ways to improve the functioning of the scheme.

Before he became an MP, Harivansh was Editor-in-Chief of Prabhat Khabar, the formidable Hindi daily. He took Prabhat Khabar from a few pages printed crudely in black and white to being a powerful voice against corruption and a valuable media brand.

Civil Society spent a morning with Harivansh at his Akbar Road home in Delhi for this interview.

What are your concerns about MPLADS?

As ex-officio chairman of the committee on MPLADS I took a close look at the scheme. Before that, as an MP in the Rajya Sabha, the question that confronted me was how I should use my own MPLADS fund. And, earlier, as a journalist I was aware of the genesis of this scheme.

But first let me explain how I used my own MPLADS fund. Most MPs use the money for minor works, which benefit local people. It could be for building a road or some other small piece of infrastructure.

What you are saying is that you didn’t want to duplicate the work that the state government was doing, you wanted to use the fund in a more strategic and meaningful way?

Exactly. After talking to our chief minister, Nitish Kumar, and seeking his advice, I funded a Nadi Adhyayan Kendra (Centre for River Studies) at the Aryabhatta Vishwa Vidyalaya, Bihar’s upcoming and most prestigious university.

My reason for doing so is that Bihar is a land of rivers. We have always been ravaged by floods. I used to live near a river. I saw how a river changing its course would wipe out village after village. A research centre on rivers, I felt, would greatly benefit society by changing the way we perceive rivers and helping us tackle the right issues.

I also recommended the setting up of two other centres in IIT Patna.  One is a Centre for Earthquake Studies. The second is a Centre for Endangered Languages. Work has started on all three centres.

And how are MPLADS funds being used generally?

When I became chairman of the MPLADS Committee, I called a meeting of the committee’s members. They pointed out that they hadn’t gone to see how the scheme was being implemented on the ground.

So, in November last year, we went to the Northeast. We met high-level bureaucrats of West Bengal, Sikkim, Manipur, Tripura, Nagaland, Mizoram, Arunachal Pradesh, Assam. We inspected (the implementation of) the scheme.

My first impression was that the fund is perceived as a Parliament fund. If there is any malfeasance or impropriety in the scheme, then our MPs are mostly seen as being responsible for it. But the truth is, this is not so.

Yes, there may be some MPs who may have misused the scheme, but largely it is the system that is at fault. It is filled with lacunae.

The scheme is to be implemented at the district level by the bureaucracy. If a part of the fund has been used, a utilisation certificate is needed so that more funds can be released. Meetings and regular monitoring are supposed to take place. But all this does not happen. The mechanism for monitoring the scheme is faulty. The district magistrate is overloaded with work. He or she is already chairperson of some 75 committees.

Also, sometimes the fund is used for projects it isn’t meant for. For example, rules have been clearly framed on how much money you can give to an NGO, that the NGO should be registered and so on. But this isn’t always followed.

Having said that, in the Northeast and West Bengal, some really good work is also happening under MPLADS. I have seen how marginalised women are being helped and their children are getting a good education.

The question is, how can good examples be large-scaled and replicated and systemic faults removed.

In retrospect, what is your overall assessment of MPLADS?

We found that there were MPs in the Northeast who weren’t even sure of how much money there was in their fund. When we came to Delhi we decided to get to the bottom of the ‘implementation mystery’. We asked the nodal ministry for a status report on how much money MPs had in their MPLADS funds and how the money had been spent.

We asked MPs for their opinion. Did they think funds were being appropriately spent? Many MPs vociferously criticised the implementation of MPLADS, saying it was riddled with impropriety. They wrote to me with suggestions of how this could be improved.

The Central Information Commission’s (CIC) report of September 16, 2018 highlighted disturbing aspects of the scheme and the problems it faces at the operational level. It has made a number of suggestions including a legal framework for the scheme.

I thought the matter could cause an uproar. We should at least know the kind of schemes/projects that MPs are funding.

So I wrote another letter to the MPs requesting them to sit together and discuss what shape and form the fund should take.

I examined the history of MPLADS. There had been MPs who were not in its favour at all. In fact, since 1998 there have been a series of reports that have been critical of the scheme and its implementation.

In 1998, a financial audit by the C&AG (Comptroller and Auditor-General) was critical of the scheme. Another C&AG report of 2010-11, a ‘performance audit’, pointed out systemic problems in implementation but they were not addressed.

The Programme Evaluation Organisation of the erstwhile Planning Commission studied the design, implementation and impact of the scheme and suggested changes.

The report of the National Commission to Review the Working of the Constitution, headed by Chief Justice M.N. Venkatachaliah, also examined the principle behind MPLADS, and raised questions about its very existence.

The Second Administrative Reforms Commission, headed by Veerappa Moily, questioned the legality of the scheme and said a decision should be taken on its continuance.

But the scheme is legal. A case was filed in the Supreme Court on MPLADS and its status. A five-judge bench headed by Chief Justice K.G. Balakrishnan in a unanimous verdict on May 6, 2010, said MPLADS was legal and statutory. It also stated that faults in the scheme should be monitored by Standing Committees of the Lok Sabha and Rajya Sabha and accountability mechanisms made more robust. I informed MPs that all studies related to the scheme pointed to systemic failure.

I pointed to a study by a former IAS officer, Rashmi Sharma, “District Collector - Superman or Stop-gap Solution?”, as well as the 55th report of the Public Accounts Committee on MPLADS and the 61st report of the Standing Committee on Finance on Demands for Grants of the Ministry for Statistics and Programme Implementation, 2018-19.

We must rectify this. I have asked MPs to suggest how we can improve the workings of the scheme and use it for nation building. This money is, after all, the nation’s wealth.

How do you think the funds could be used? It isn’t a very big sum.

That decision will be a collective one taken by parliamentarians. In my mind we should set up a system that addresses systemic failures that our own MPs are pointing out. Ultimately it is a governance issue. The MP can recommend that the money should be spent on a particular project. But the money is actually spent by the district administration. Governance at that level should be efficient and seamless so that MPLADS is spent the right way.

Also, if all MPs get together and spend the money collectively we can address some of the more challenging problems that the nation faces. Take the water crisis. All MPs can get together and decide how we can use the fund to tackle the issue of water.

I must mention in this regard that MPs pool their funds for helping people affected by natural calamities such as floods (in Kerala), cyclones (in Odisha), earthquakes (in Bhuj, Gujarat), etc. in different parts of the country. Funds are pooled and sent to state governments for rehabilitating people.

Similarly, we can encourage MPs to contribute their funds, at least a certain percentage, for tackling issues of common concerns such as the water crisis and climate change.

I understand India is a large country and every state, every district has its own issues. Perhaps funds can be pooled to address state- or area-specific issues relating to water or education or some other developmental concern.

Gandhiji used to talk of village planning. We can talk of district planning. Three or four MPs can pool their funds and address the most difficult issue in their area in mission mode. I think the outcome will be very positive.

But with just Rs 6 crore, in a large constituency how much can you really do? You talked earlier of strategic use. Please explain.

First, I should find out what I should be spending on in the district. Do farmers need training, exposure to all the latest agricultural innovations in agricultural universities? You might need a hostel for that – a building, an institution. I can ask the farmers to form a cooperative. The district administration will build the hostel. Farmers will be involved at every stage. The university can send its teachers. The scheme should be practical.

We are currently going through the Fourth Industrial Revolution. The earlier generation lived during the time of ideas. We studied the various revolutions. Gandhiji with his ideas and thoughts converted the Congress into a mass movement. But this is the era of the technological revolution. It is technology that is changing the world. Silicon Valley dictates where we are all headed.

How can we build institutions that cater to local area development? It is the duty of MPs to do so. This is clear in my mind.

Some time ago the prime minister had suggested that MPs adopt villages. What you are saying is somewhat similar.

I agree. The PM’s scheme (Sansad Adarsh Gram Yojana) is an excellent one. You adopt one village and every year spend your entire Rs 6 crore on the village and its development. It has a demonstrative effect. Other villages begin to notice and emulate.

What I am saying is, let’s put all this into policy. Alongside, let us ensure that the bureaucracy, in its implementation role, is absolutely efficient and participatory. The scheme’s identity is linked with politicians. I have been telling my fellow MPs we are getting a bad name due to poor implementation. Let us find a way out.

I definitely think that MPs should think through the scheme and include our bureaucrats. Maybe we could set up a think-tank and then take a decision on what can be done to make it a role model of a scheme. We should have the best policy and the best implementation system.