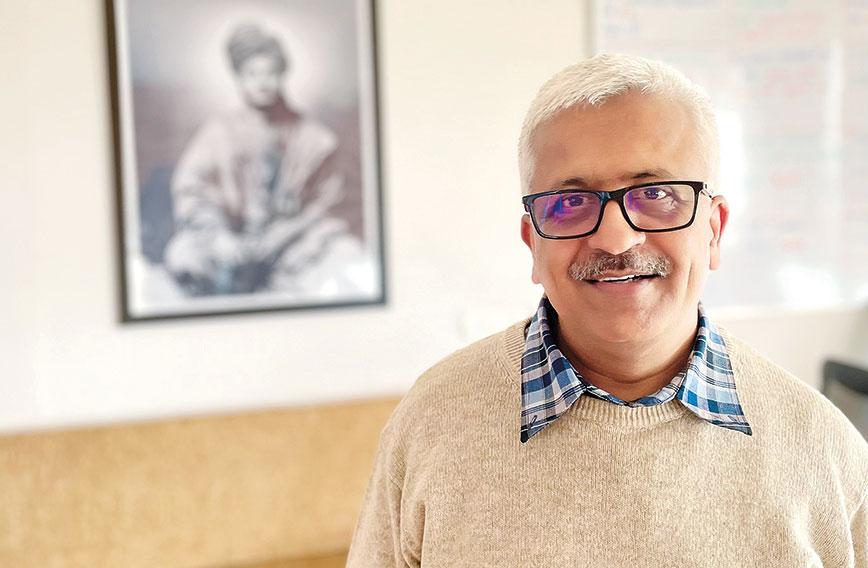 R. Balasubramaniam: ‘We would like to set benchmarks of performance and enhance e-learning resources’

‘We are mapping officers for competence and capacity’

THE Government of India is a leviathan and bureaucrats are widely accused of being mired in procedures. They are also seen as obsessed with their own powers. Instead of facilitating development they tend to slow it down. How can they be made more accountable and action-oriented? Can they go from salaried karamcharis to role-driven karmayogis?

An elaborate exercise driven by Prime Minister Narendra Modi himself is underway to change the way the bureaucracy performs. The Capacity Building Commission (CBC) has been set up. Its job is to map officers and put in place processes for assessing them. Designing online training modules is a part of the commission’s brief. An officer who goes from aviation to health or education should have a basic knowledge of the new subject he will be dealing with.

R. Balasubramaniam is member, human resources in the commission. Civil Society spoke to him about the momentous task ahead.

What is capacity building in the Government of India (GoI) actually going to mean?

Around two years ago, the Prime Minister conceived of Mission Karmayogi. Essentially, the mission redefines how public servants think and feel about their role in the government. The idea is that government servants should see themselves not as salaried employees or karamcharis, but as karmayogis or people imbued with the spirit of action and service.

Mission Karmayogi is overseen by the Prime Minister’s Human Resource Council (HRC). The heart and soul of Mission Karmayogi is the Capacity Building Commission. Our primary mandate, in the words of the Prime Minister, is to get people in government to move away from a narrow, rule-based approach and instead see themselves as performing a ‘role of service’ to citizens. So, it is about shifting them from rule-based thinking to role-based thinking.

If we talk of a new India, we need capacity in the system to deliver. It is necessary, therefore, to get the bureaucracy future-ready.

And the State understood that its role was no longer about just delivering goods and services, but also about enabling citizens to receive those goods and services. Boundaries between the public sector, private sector and civil society got blurred.

India achieved independence in 1947 and the Indian civil services inherited a colonial mindset. They saw citizens as just subjects. But I think from the 1950s there was this feeling of being a provider. From bakeries to running airports, the State did simply everything. Then, in the 1990s came privatization and liberalization and the State had to have a vision for development and not just provide for it. And today, the PM talks of jan bhagidari, which means partnership with citizens. That requires a levelling of power and accepting citizens as equals.

Capacity building is a combination of all this. It means shifting the mindset of civil servants from being rule-based to role-based and giving them the skills to deal with the new demands being made of the bureaucracy by citizens. It also means appreciating the need to look at citizens as equal partners and taking them along on the journey of development. It is a completely new ballgame.

How many members are there in the commission?

It’s a three-member commission. The government has conceived of its membership in a very interesting way. My colleague, Praveen Pardeshi, is a 1985-batch IAS officer. I come from civil society and academia. We are both full-time members. Our chairperson is Adil Zainulbhai, who is from the private sector and was earlier chairman of McKinsey in India. He brings in the private sector way of thinking.

It’s a very unusual combination and reflects the evolution of public services. The intent of the government and the Prime Minister is to get the best out of different ways of thinking and make that amalgamation work for the State and benefit its citizens.

Will you be looking at people across the board or only those employed by the central ministries? Do you include the states?

Technically, our mandate is only for the GoI and all categories of officers in Groups A, B and C. There are only 30,000 Group A officers across the country. There are Groups B and C, which are hardly noticed, but where the bulk of the work is done. We are looking at 3.1 million people right now and it is a huge number. Whatever material we put together is available to the entire country. If the states want to use it, they are more than welcome.

How are you going to feed this into the system? How will people use it? What kind of material will it be?

We have mapped the supply side. We know that there are 800 institutions, which include the LBSNAA (Lal Bahadur Shastri National Academy of Administration) for the IAS and the Police Academy, amongst others. Every ministry has got its own training institutions. We want to build the capacity of the supply side. We would like to set benchmarks of performance and enhance e-learning resources.

The government has recently created an exclusive digital learning platform. It’s called Integrated Government Online Training or iGOT. It is a Section 8 company under which the GoI will own all the digital assets that are created. The material will be curated and overseen by the commission, and we’ll make sure that all material on building capacities will be available online. It will be a platform where anytime, anywhere and any device learning can happen.

We don’t want an officer to take time off from work and go for training. Officers should be able to access the material required based on need.

We are making sure that the material is in small bites of three to five minutes. You will be able to watch the video or hear the audio file or read the material — all within this short time frame. The iGOT platform offers a single source destination for all the components we will need and require online.

On the demand side we are mapping people’s competencies. We will be doing an HR audit of all the 93 ministries in the GoI to know how many people there are, their roles, how they are performing and what they are supposed to be doing given the goal of the ministry.

Take the example of the civil aviation ministry. Civil aviation is a fascinating combination of so many different skill sets. You need people who understand citizen-centric services and then you need to have the capacity to be regulatory in the way the DGCA (Directorate General of Civil Aviation) functions. You have an Airport Authority of India to look at the facilities that citizens get. Until recently, they also needed to know how to run an airline.

We map the mandate of the ministry and align it to national aspirations and then we ask ourselves whether the team in the ministry has the competency to deliver on this mandate.

We look at competency on three levels. The first is the behavioural attitude to serve, which is the most critical. Then we ask ourselves, does this person have the functional competency to play this role? Let’s say, does a section officer in the ministry understand what is expected of a section officer? Does he or she have the capacity and the competencies for it? To find this competency we map people and performance.

Our job is to map these competencies, map deficiencies and then provide a pathway to fill the gaps in, say, a year’s time. We provide the source from where you can acquire competency — it could be in a training institution or on the iGOT platform, whenever you can. But there is a cut-off date for you to acquire this competency.

We expect to get to every single ministry within the next three months or so. We will provide them with an annual capacity building plan, which we oversee and monitor to make sure their capacities are built, and this is going to be an ongoing feature.

Every year, we’re going to map and track the trajectory of growth in competency building. The commission reports to the Prime Minister and his HR Council. I think the system understands that this is a very important area for the government in delivering to citizens.

The President of India, in his address to the joint session of Parliament, specifically mentioned the commission as a critical entity. And the finance minister, in her budget speech, mentioned how we’re working to support different ministries in ensuring the national infrastructure pipeline project succeeds. If this commission’s work evolves and grows the way it is happening now, in two or three years it could be a game changer for India’s public administration and, therefore, public delivery of goods and services to our citizens.

So, no government official will be nameless or faceless. Will you also be looking at the processes which they use?

The moment we say capacity, we look at it from the level of the individual, the ministry or department and the government. What will ‘work’ mean three years from now? What will the government look like? The Prime Minister keeps stressing ‘maximum governance and minimum government’.

How do you deconstruct that statement? What will government look like one year from today or two or three years from today? So, we are constantly mapping and defining the meaning of work. To deliver this work what is the ‘workplace’ looking like? And there we look at policies, rules, regulations. It is also part of our mandate to do HR audits and mapping and we are going to do it soon.

Nobody’s asked government officials what it means to work in government. What does the workplace mean and what’s coming in the way of delivery? How does he or she perform the assigned role in a facilitatory, process-driven manner?

What about recognition? Officials feel they don’t get any recognition even if they do good work.

Just a few days ago, we launched a national portal on innovation in public administration. We are saying, we would like to know what you are doing. It could be anything, a small innovation or a major one. We want to celebrate them as heroes to make sure that they’re actually heard and seen.

Our annual report will have a dedicated chapter on innovations in public administration. The best ones may get picked to be reported. Second, we are going to create a knowledge repository. Personally, as an academic, I feel it is inappropriate that we teach cases which aren’t in the Indian context.

We are creating a repository of India-specific cases which our own officials, in their own small ways, have achieved. We’re building a case bank of all success stories. The examples we are interested in should not be more than five years old, scalable, measurable and citizen-centric. I am putting all my academic experience and knowledge from Harvard and Cornell into building knowledge partnerships with top institutions to support us.