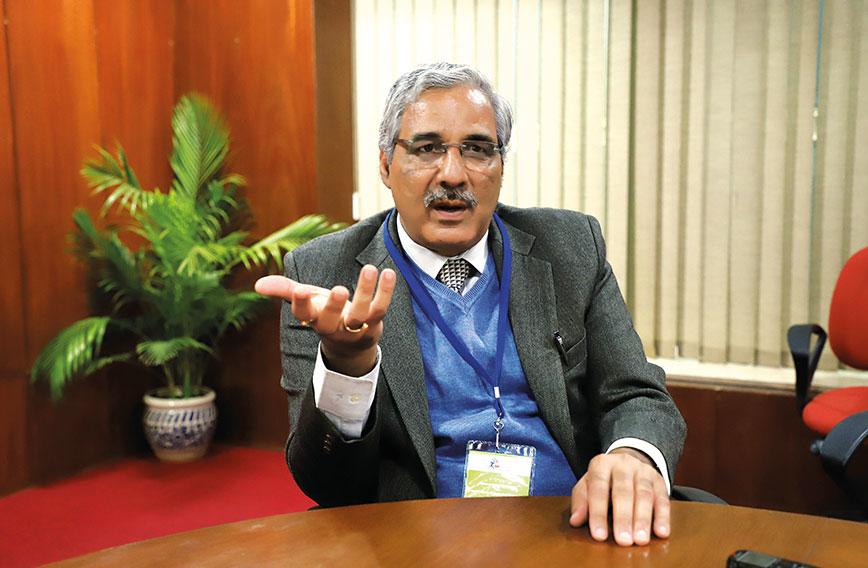 Dr Suresh Pal: ‘I would say we need to focus on those regions where farmers’ income is very low’

‘We have raised crop output but not farm income’

THe rural sector faces multiple challenges ranging from environmental decline to lack of infrastructure and inadequate access to markets. Recent agitations by farmers show that they are in distress not just in a few weak pockets but across the country.

Even as farmers protest, the BJP-led Union government has set a goal of doubling farmers’ incomes in the next five years. How challenging is this target, considering that agricultural growth declined in 2017-18? Is it feasible at all?

To have a clearer understanding of the government’s farm strategy, Civil Society spoke to Dr Suresh Pal, Director of the ICAR-National Institute of Agricultural Economics and Policy Research.

Is it possible to double the farmer’s income by 2022? What needs to be done?

It is a real challenge. But the objective is timely. The government has signalled a policy shift. In the first stage, such a shift will sensitise government, research institutions and other stakeholders working in the field of agriculture. We need to focus on income policy. In agriculture, we are doing well both in production and other parameters but if you look at the income of farmers, it is very low. The size of holdings is very small. We haven’t paid enough attention to enhancing farmers’ incomes.

Can we achieve this? It is difficult to answer primarily because agricultural systems depend on several things. If in one year you have two or three bad crop seasons it will seriously impact the income of farmers. But assuming everything is normal, it is possible to boost income provided we have a systematic strategy and an action plan.

I would say we need to focus on those regions where farmers’ income is very low. These are the 150 districts identified by NITI Aayog. In some states, for instance, Odisha, farmers’ income has doubled. We require a strategy and resources to invest in agriculture and sensitise the government machinery and all those working for agriculture.

The farmer produces crops at a high cost to himself. How do you reduce that?

It is possible to reduce costs in terms of input-output. The entire input system is undergoing a major change. There used to be large participation of parastatal agencies. Public sector companies are still there in fertilisers and seeds but a large part of the input system is now in the private sector.

All pesticides are in the private sector and so are growth regulators. In farm machinery, the private sector is poised to take a big leap. So, since we have private sector participation, there is going to be full recovery of costs as there can be no subsidy. However, if there is competition, private companies can bring down costs. They can also improve efficiency.

The other issue is the declining interest in farming. Nobody wants to work in agriculture. Therefore, wages are rising very fast. For most crops, the major cost component is labour. In many areas farm mechanisation is picking up. That has its own implications. Farmers will need to buy those machines.

Are we headed for a big technological revolution in farming?

The technological revolution has already happened — biological, technological and chemical. Large-scale application in farmers’ fields is now picking up — because wages are rising.

But what would be the ingredients of a new strategy?

Agriculture is a complex subject. But some areas have been discussed. There is a seven-point programme which the Ministry of Agriculture is focusing on. First is to improve the efficiency of agricultural production and thereby reduce costs.

Second is diversification. It has been happening, but we need to accelerate that by boosting commodities that give higher value like meat, milk and horticulture. This diversification has to be sustained in terms of delivery to the consumer for which we need better marketing systems, which are currently not very efficient. We need integrated supply chains that benefit producers, consumers and investors.

In some commodities, we have surplus. We export rice, horticultural produce, fish and meat. Here, trade policy is important. For example, we recently increased the import duty on oilseeds. This is because imports were increasing and incentives for producers were depressed. So, prices for domestic producers can improve. We need to export more to bring money to the country and to farmers. Value addition, mechanisation, precision agriculture can all bring value to farmers and reduce per unit cost of production.

How important is the environment issue for farmers?

I don’t think environmental issues are limiting the prosperity of farmers. At the same time, there are some issues which if we address them, can help the income of farmers. Take waste management, specifically crop residues. There are technologies. But you need business models. If those can be successful, value can flow back to farmers.

One example is paddy straw. They are looking at taking it into the soil and improving soil fertility. That will improve productivity.  We also need to improve water efficiency through micro-irrigation in central India and northwest India where water is scarce. But that requires investment. Where will that come from? Farmers don’t have the money to invest in those systems. They take money from informal sources where the rate of interest is very high. Access to institutional credit needs to improve. Kisan credit cards have been introduced and are effective but not all farmers have them.

Most governments are veering towards providing higher Minimum Support Price (MSP) for crops. Is that a sustainable way of increasing the income of farmers?

There is a limit to that. MSP is a signal. Let’s say, for paddy and wheat the government procures around 30 percent. The states procure sugarcane, to some extent cotton, jute and now pulses. But governments cannot assure that, so other mechanisms are being discussed like a price support scheme if prices fall below MSP.

Yes. Hopefully, it will be successful. Price stability is important. If you have over-production of just one or two crops, it has a major impact on prices. When we have even one or two million tonnes less, there is a steep rise in prices. One way of ensuring price stability is by processing, say, tomatoes. You can then have tomatoes through the year. You create demand and consumers can choose between fresh and processed tomatoes.

Farmers’ organisations are asking for 50 percent over production costs, basically the recommendations of the Swaminathan Commission report.

There is serious discussion on that, too. Dr M.S. Swaminathan was invited to a meeting of NITI Aayog. He told us the background to this recommendation. He said they had considered a number of factors the farmers face and then calculated how much support farmers would need to tide over all those issues.

We have for long talked about nurturing a robust agro-processing industry. But there are still constant complaints about inadequate cold chain facilities, disinterested industry, messy contract farming. Why?

Contract farming is working. We don’t have model contracts but still most premium produce does not enter the formal market but is being exported. For example, Basmati rice and Alphonso mangoes. Millers and exporters buy in advance.

So, although the market is unstructured, there are workable systems?

One way is through a formal agreement between the producer and the company. But when you do have availability in the market, buyers compete and buy from farmers for export. Take apples. The fruit arrives at the Azadpur Mandi and exporters buy it from there. It depends on the nature of the commodity, what is the demand, who is the supplier.

If the commodity is in short supply, the buyer will go in for a formal agreement with the producer. Or if there are serious quality issues. The buyer might require produce of a particular quality, for example, specific types of potatoes to make potato wafers.

But there are a number of commodities that could benefit from agro-processing but haven’t.

You require investment and quantity of produce. The plant must be fully operational. The government is encouraging processing and providing several incentives. It will pick up. Consumers have different preferences. They might pick up packaged juice one time and then want fresh juice the next time. Maybe you require two different types of crops for that.

The government launched e-NAM, a virtual common agricultural market. How is that working and is it possible to reap benefits from it in the short term?

Karnataka has implemented e-NAM successfully. It is a good initiative because it addresses several  issues. One major problem was lack of transparency in how prices were set, who is being paid how much, etc. Now you have transparency in price discovery and farmers get an advisory telling them the current price on that day. They can transact on the same day over phone or they can come to the mandi. It’s a major step in bringing transparency.

Second, it is important for traders also. They don’t require multiple licences. A single licence will do. If a trader wants to buy a commodity from another state, he will know what the price is as well as the quantity available. Wherever it is operational, farmers have benefitted.

Third, there is emphasis on storage. The farmer gets a warehouse receipt if he or she is storing produce in a warehouse. That receipt is negotiable. You can get a loan against it. Besides, the farmer can sell when the price goes up.

Programmes are being integrated, streamlined and delivered to farmers, whether it is horticulture, farm mechanisation, access to credit or DBT (Direct Benefit Transfer). There has to be synergy between the government, development agencies and farmers. You also need to inform farmers that these are the initiatives and programmes they can benefit from.

So the government will need a big communications programme?

Yes, earlier somebody would go to the village and tell people but now everyone has a phone, a smartphone and a TV.

How do you see the opportunities in organic agriculture?

It’s a good concept but success will be determined by what benefit consumers see. The farmer will then get a premium. Consumers will decide.

But isn’t that happening? Sikkim is now an organic state.

States in the northeast have a natural advantage in turning fully organic. They are not yet using much chemical fertiliser and pesticides. But bringing that produce to the rest of the country will require a lot of investment.

During the Green Revolution things were done in mission mode. Why is that spirit missing?

No, we are in mission mode. In fact, we are much better organised now. Take the case of pulses. Every year, we were running a deficit. Now we have a surplus in just one year. The government said it had to be done. So, price mechanism, technology transfer, seeds, everything was directed to achieve self-sufficiency. It all worked together and in one year we achieved this increase.

The Green Revolution was a big phenomenon, a revolution. Such a major change is rare globally. We now increase productivity in stacks. For some crops like cotton we have reduced costs and improved productivity through Bt. We have done significant improvement in maize, without GM. There are many success stories in cotton, maize, vegetables, fruits, pulses, fisheries, and milk.