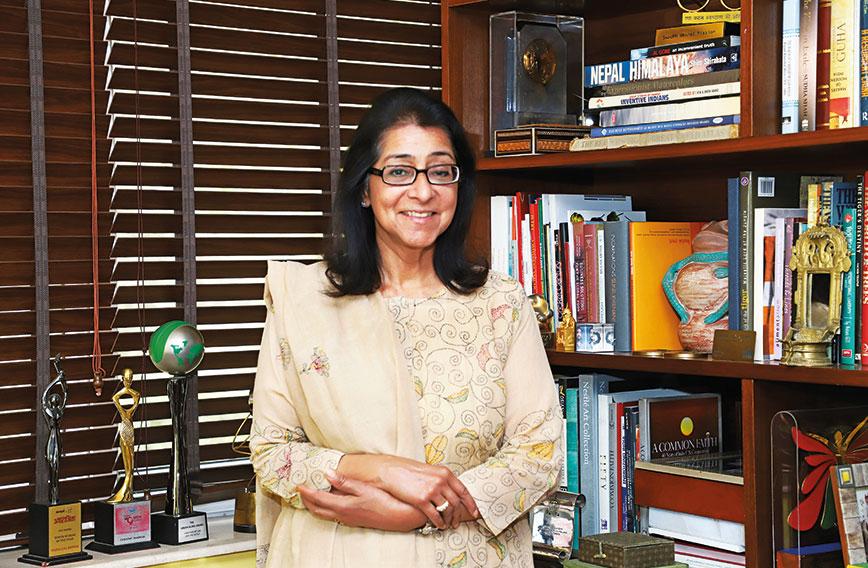 Naina Lal Kidwai: 'The issue today is of regulatory risk'

India’s environmental record stares the country in the face, be it the foul air in its cities, the shrivelling up of its rivers, or the destruction of its magnificent coastline. Everyone, particularly industry, should be embarrassed by what has been happening.

Depressing as the situation is, it is important to find ways forward. Other economies have shown it is possible to climb out of a hole and clean up. India could learn from them in governance and regulation as well as the use of technology.

But before that can happen, India has to first see the future differently and aspire to be sustainable and efficient. Discussion and some fresh thinking are needed. To this end, Naina Lal Kidwai has made a useful contribution with her recent book Survive or Sink.

Kidwai has been an important banker and an insider to the corporate world. She brings forward ideas that are worth examining because they have the potential to put markets, entrepreneurship, policy and activism on one platform.

A coalition of interests is required in our complex world. New technologies come with exponential social benefits but they have to be funded and rolled out in ways that are inclusive and viable at the same time.

Kidwai puts all this together well and so, rather than have Survive or Sink among Civil Society’s book reviews, we offer here a slice of what Kidwai has to say in an interview conducted in the noisy tea room of the Gymkhana Club in Delhi.

We have ambitious targets for renewables these days. What kind of financial support systems should be put in place to fund green projects?

I would argue that the finance is available, provided we can create projects that are financeable. The issue today is of regulatory risk where a politician comes in and says this service should be for free — so what had been agreed as payment to me changes. No bank wants to fund these businesses because of this fear. Safeguards and guarantees have to be there.

Now there are ways in which that can happen. What many of us are looking at are credit insurance schemes. So I, as a bank, lend to a project where some of these risks, which are known and are preventing finances from flowing, are taken care of.

We have to create projects which are entirely defensible, and which rules and regulations protect on an agreed basis. Thereafter, banks will fund them. In the initial stages these risks are there so we need the financial tools which can credit enhance the project.

Look at the solar sector. The fact is that a guy who set up a company (to sell power) at four bucks (a unit) finds that the price has dropped to two bucks forty. He is being asked to renegotiate his price. And that becomes the killer.

Yes you can renegotiate his price and try and bring it down, but what about the bank that came in four years ago with more expensive equipment, at a price entirely competitive at that point of time.

Banks may not be the best suited to funding infrastructure. Wouldn’t it be better to have a separate funding ecosystem capable of absorbing these risks?

Which have been set up from time to time. We have had IIFCL (India Infrastructure Finance Company Ltd) and then we have had NIIF (National Investment and Infrastructure Fund). But the role they play should be credit enhancement. They shouldn’t be the ones who are writing the cheque. The money that is in the system should flow in.

Yes, we need to look beyond banks. Infrastructure needs 20-year funding and banks give five. There is a total mismatch. We need capital markets as well. We need the bond market. That is why the green bond market is exciting. That money is available for renewable projects today.

We have all this in some form or the other. What can be done to make it a formalised and effective way of funding?

The regulatory systems have to be respected. You have to have projects which are financeable in the first place. The rules of the game can’t change midway — they have to be adhered to. We should have different types of financial instruments. By that I mean capital markets, not just banks. There is the whole concept of municipal bonds, which we are just beginning to see.

In the Pune municipality, for example ...

Exactly. Not every municipality will be able to raise money through bonds but at least the well-managed and profitable ones can. In an interesting way, capital markets bring accountability, too. When you raise money from the capital markets you are answerable to someone. The rules and regulations under which you raise the bonds also become protection against politicians changing the rules.

It provides some kind of structure ...

And protection in its own way. In the UNEP (United Nations Environment Programme) we did some very interesting work on financing sustainability. I was fortunate to be a member of the International Advisory Council. We were looking at the financial architecture around the world for financing sustainability. In fact, green bonds were still not the norm. I used the opportunity to set up an India Working Group which I did with FICCI. We looked at all of these things.

It has to start with the financial architecture in the country. It is not enough to say, let’s do green bonds in India. I also need the accounting firms which can certify what is green. It is alright if I want to keep funding renewable projects, but I also want to fund energy efficiency. I want to fund the energy-efficient building. You need to look at a rating and certification system to direct money.

And if we could also have a stock market like FTSE 4 Good Index in the UK. You can then have a green rating for a company that allows it to raise money at a more attractive rate that otherwise might not be available. All this begins to direct funding where we need it.

Who needs to move? Should it be the government?

It is everyone. The good news is that it is IFC (International Finance Corporation) and other multilateral bodies which are coming in and providing some of these tools. Our own NIIF is a big wealth fund where we have got Abu Dhabi invested and others are coming in.

I think this is exactly the kind of body we need with big and long-term money. If it can look at infrastructure in a green and sustainable way so that what we build is efficient in every respect, including the environment, then we get to what the right solution is.

Do we lose out when it comes to policy? Do we miss the bus? Are we not sharp enough? We put money into big thermal plants, where it is stuck, when we should have been thinking of green power. Green mobility is another example.

I am not saying that you should go away from thermal and coal because you can have a clean coal solution. But 100 GW of solar and 60 GW of wind is beyond a concept today. It is actually very clearly being implemented. There has to be a phasing out of thermal plants that are 50 years old and poisoning the air in our cities.

Should India have been thinking of a solar and wind push much earlier?

In hindsight, yes. Now the good news is that you have had companies like ReNew Power come up through the system as start-ups, which is fabulous. But many start-ups also failed and banks have burnt their fingers. At the same time when you get a Soft Bank-Bharti venture in solar there is a lot more comfort. These projects become bankable. If now you get the big boys saying they are in this journey, it is because finally the Indian government got it and regulations looked attractive.

The risks of dealing with distribution and transmission companies needed to be taken care of. If the guys I sell my power to are sick and going down the tube, how am I going to raise money?

Even in solar the weakness for us is whether we are tackling the grid. It is about a smart grid, the way we wheel power through the system. The solar companies that make money are the ones that sell to industry. So the investment that has to happen in solar is on the infrastructure side, which is really all in the government’s hands.

A lot of envisioning needs to happen.

Today we have a vision. The 100 GW and 60 GW have been started. I was part of a very exciting discussion last week of the International Solar Alliance. Not only have we started our agenda in India, we are leading the world, along with France.

Solar is supposed to be a success story. But in your book you say it suffers from a lack of capital because of poor institutional support and poor management.

The poor management has been the grid itself which we need to step up. There have also been start-ups in solar that went bust and that has created its own backlash.

But isn’t solar a success story?

It is a success story. The main success is due to multiple reasons including the fact that Chinese imports of modules dropped to a price that made solar affordable. The real success has been the price of solar being as cost competitive as thermal.

In solar, money, policy and entrepreneurship came together. Would you say it is the same opportunity in electric mobility?

It will have to be. Look at the success of EESL (Energy Efficiency Services Ltd) and LED lights. The government has the ability to drive down prices through purchases and in a way that is what we are replicating for electric vehicles.