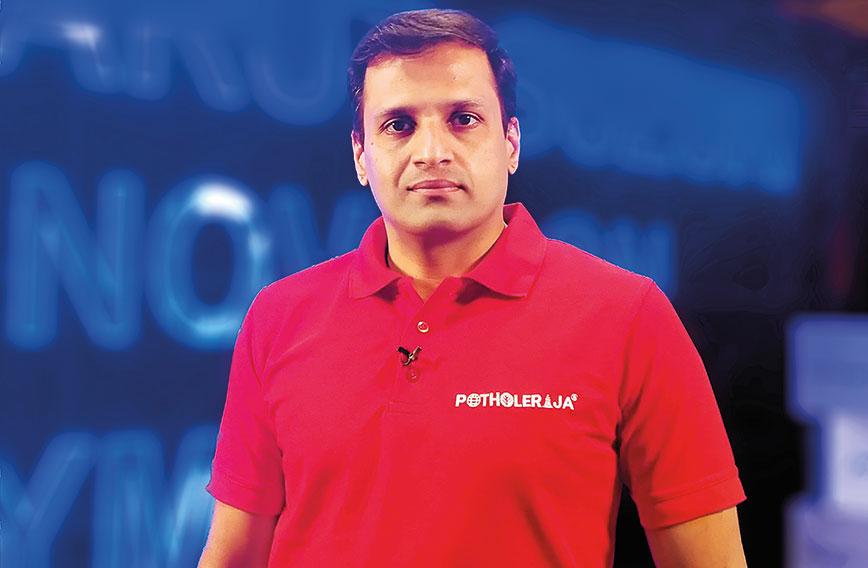 WHEN he was in the Indian Air Force, Prathap Bhimasena Rao was flying Jaguars and breaching the sound barrier. After the Kargil war and the ceasefire that followed, he couldn’t fly anymore because of an injury. He joined civilian life, earning a management degree from Harvard and working with blue chip companies.

Now at the age of 44, he has dedicated himself to fighting a different kind of battle at ground level. He saves lives by fixing potholes and by making roads safer.

Potholes occur worldwide, but they are the particular bane of Indian roads, resulting in loss of lives and slowing down transportation. Filling them should be a priority so that people can get on with their lives, but innumerable challenges come in the way of road repair.

In 2016, Rao launched PotHoleRaja, his social enterprise, and in the short while that he has been around, he has succeeded in finding a quick-fix solution to road repair. He has also come up with road-building techniques that make road surfaces more durable and put plastic waste to good use. In addition to his social enterprise, Rao has a company, Ground Reality Enterprises, under which he takes on commercial contracts. Excerpts from an interview with Civil Society:

Q: You were a fighter pilot and you got interested in potholes?

Absolutely. When I did my own studies, I came across a lot of interesting statistics. In 2015 the Supreme Court came up with startling data: there were 800 deaths due to terror attacks but in the same year 4,000 people died due to potholes. So, potholes were more dangerous than a terror attack. Potholes are a global issue and a challenge for civil engineering across the world.

Q: When did you launch PotHoleRaja?

Officially, I launched my company in 2016 when I started fixing potholes, but the idea was to look at more sustainable architecture. Pothole is essentially a post-mortem. The road has gone bad, and you are fixing something that’s broken. The pothole can start with a crack, then it continues to grow due to impact on the road, there is seepage, breakage in the underground and the pothole happens.

Technically, potholes are one to two square metres with a 50-mm depth. That means you have a depression on the road. When you see it, it’s not a full-fledged crater already.

When I started looking at how potholes are traditionally managed around the world, I found they use the old model, especially in India. Road making and maintenance adopt the same methods. They use hot mix, pavers, road rollers, etc. Unfortunately, technically that is not the method for fixing potholes.

The pothole covers a small area on different parts of the road. When you construct a new road, the paver can keep going on one stretch continuously, using material which needs to be at one temperature —about 120 to 130° Celsius. Hot bitumen is laid, using a paver.

Now, they use the same hot mix method to fix potholes. Unfortunately, you can’t do that with large machines. You need to have small lorries moving into those small parts. Material is unloaded from larger lorries and put on a small patch. By then the temperature dips to 70 to 80° Celsius. With that kind of temperature, the mended potholes will not last. That is one of the reasons why, after a few days, the pothole is back again. One period of rainfall and high traffic movement and the pothole is back. Technically, it’s an inappropriate method.

We did our research and through global exposure we found that something called a cold asphalt and bitumen mixture stored in a bag was available. No heating was involved. It is a chemical oxidation process. It is like a 25-kg ready-to-use premixed bag. You can keep one or two in your car, tear it open, fill it on a pothole, hand tamp it or use a machine. That has been one of the methods used globally. I’ve not invented it.

In 2016 I began importing cold asphalt from the US and a bit from China. Meanwhile, Hindustan Petroleum Company got into collaboration with a French company for cold asphalt. I started becoming one of its large buyers. We did a lot of research with their R&D team, using plastic waste with cold asphalt as a filling material for pothole fixing.

Q: How do you fill potholes?

We have our own unique mixture of coal-based bitumen with plastic waste and crumbed rubber. When you retread a tyre you get a lot of small powdered rubber which is actually waste material. We use that as one of the materials.

From the beginning, I wasn’t just looking at potholes. My focus was preventive: how do we make roads that don’t develop potholes. How do we look at infrastructure so that you don’t get into maintenance. We were doing a lot of R&D to create roads with plastic waste, industrial waste and other waste. Our aim was to create infrastructure which is so non-technical that even an unskilled worker can do it and people can just buy a road.

That’s how in 2018 I finally created my first product called the grid mat, a plastic-based honeycomb structure with an inter-locking grid. Imagine how you make a road. It is a sandwich of layers, soil, more soil, asphalt, tar, bitumen layer, etc. Both asphalt and bitumen roads need multiple layers and rollings. That’s where the technical compromise happens. Water is the enemy of roads and when water stagnates, breakages happen, and potholes emerge.

Q: What is the area of your business? Is it confined to Bengaluru?

No. We are now in 35 cities in India, and we have done 25,000 potholes in the past five years. Potholes can be as large as a crater or just a small hole. I consider one square metre  to be a pothole. We have also done 20,000 volunteering hours with CSR funds. We have educated close to 7,000 volunteers and 15,000 students on road safety and fixing potholes. And that’s just in India. In the past year we have also gone to Europe, Indonesia and Africa. I’m going to Nairobi to enable their government to explore our model and adopt it.

Q: What is the size of your company?

There are two aspects to road infrastructure: public roads managed by government agencies and private roads like, say, in an IT park managed by a private company and used by people on the campus and the public.

Initially, I was only focusing on public roads and fixing potholes. But the funds and donations we received were not enough to tackle the number of potholes being reported.

I have a mobile app and WhatsApp number 814 where you can report a pothole. Just send us a picture with the GPS location and details of the pothole. We will go and see if it can be fixed. We also request people reporting the pothole if they can spare funds for it.

We do not go to the government or municipalities or take part in tendering processes. One of our largest sources of funding is CSR funds. About 30 companies have funded. We have raised close to two and a half million dollars in terms of grants, donations and CSR funds.

Q: Which companies have you made roads for?

One of our biggest projects is with ABB in an industrial area of Bengaluru where we are making five km of road. We are doing drains, walkways, signals, lights, surveillance cameras, anything you can imagine in a smart city. It’s a complete transformation and includes all aspects that are critical for a safe and beautiful road.

It’s not just potholes but road safety that we are concerned with. We worked with Mercedes-Benz on an amazing road safety project in Bengaluru and Pune. They go to schools and teach road safety to children. One of their biggest R&D centres is in Bengaluru. They started with schools around Whitefield and found the children disinterested and somewhat amused. The children said, See the road infrastructure outside our schools. We don’t have zebra crossings. Or no-honking zones. We walk to school. Our parents don’t drop us in cars and on bikes.

The company connected with us. We did audits in 20 schools to determine what makes a school zone safe. We got students, employees and traffic police to audit two km around the school and determine the kind of infrastructure needed for safety. There were eight to 10 aspects that were required. Eventually 15,000 students and 6,000 employees of Mercedes-Benz fixed potholes, placed speed-breakers, reflectors, and appropriate walkways and crossings.

Another important aspect is our grid mat technology. We are making roads that don’t get into pothole issues. Reducing the thickness of the road has a positive environmental impact in terms of carbon emissions, footprints, acidic reactions and weight on the road.

We have done 500 km of roads using grid mats, including Adani airport in Ahmedabad, and flooring for the Maruti Suzuki plant in Gurugram and Manesar. Last month I was in Europe, doing research on how to create a circular economy in infrastructure.

We insert sensors inside the grids to track data points. We are using IoT (Internet of Things)-based smart roads. The sensors tell us how many vehicles use the road, what is the load, the temperature and the pressure. Another project we are working on is vigilance for Border Security Roads using such sensors which capture data.

My research in Europe includes solar roads. So another pilot we are doing is to make roads with solar surfaces so you can continue to drive, walk, or bicycle but you can harness solar energy through the open real estate approach.

Q: Do you work with a lot of municipalities?

We work with the BBMP in Bengaluru, the BMC in Mumbai and the municipal corporations in Ahmedabad and Coimbatore. But not through a tendering and contractor model.  They invite us, we train their engineers, give our material, deploy volunteer groups with CSR funds. We are helping them adopt this technology.

In Bengaluru, the BBMP buys material from us. We have trained their engineers. We also work with the Metro corporation, training their resources wherever Metro works are happening.

In February-March we undertook an All-India Bharat Mala. We drove 15,000 km, covering 53 places. We fixed 1,000 square metres of potholes with our customized lorry which has cold asphalt. Two EV bikes drove alongside, creating a Guinness record.

Q: How much does it cost to make a road which for five years won’t have a pothole? What is the cost saving?

For pothole fixing there is different costing. For new roads our grid mats are 25 percent cheaper than traditional costing. The other aspect is that we are also reducing the amount of natural resources you need to build a road. We are cutting use of steel, the heavy load on the ground, time and water. These are intangible benefits.

Q: You can’t have a pothole census because potholes come and go. Still, how many potholes roughly do you think we are generating?

We undertook a study with different countries with 30 interns from different colleges.  Globally, one km of road which is five metres wide, if maintained well, should not generate more than two or three potholes in a month. But in our country, we generate 15 to 20 potholes every km, every month. In Bengaluru the main arterial road and main roads are about 15,000 km. In India, as per MoRTH (Ministry of Road Transport and Highways) statistics we have 69.8 lakh km of roads. You estimate 10 potholes every km, so you are talking ab