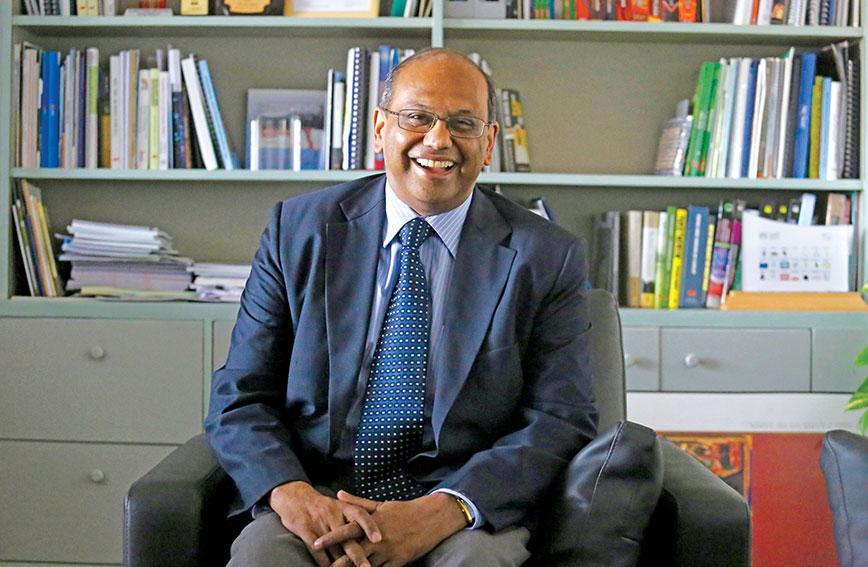 ‘India is on the cusp of energy change’

Ajay Mathur took over as Director-General of TERI (The Energy Resources Institute) in 2016. He came with a formidable reputation. As Director-General of the Bureau of Energy Efficiency, he brought in rating of appliances for energy efficiency and a building code to promote energy conservation. He has also served as a key negotiator for the Indian government on climate change.

Mathur inherits a legacy of organisational stress. He took over after a flashpoint at which the previous Director-General, R.K. Pachauri, stepped down in the face of charges of sexual harassment. Mathur is faced with both an opportunity and a challenge. He has put in place systems to ensure work ethics are maintained. The strategic direction for TERI under him is to engage with efforts to help India make the transition to green energy. TERI is involved in creating new green technologies especially tailored to Indian conditions and disseminating them. The organisation is working with municipalities and industry. It is also involved in public transport and drawing up plans and policies for cities to go electric.

We spoke to Ajay Mathur in his office at the India Habitat Centre.

What is the direction TERI is taking under you?

We face a large number of sustainable development challenges in India. We need to use energy much more efficiently. We need to use more renewables, improve water efficiency, decrease the amount of pesticides and fertilisers we use in agriculture and so on.

It is TERI’s goal to help the country achieve sustainable development through resource efficiency. Therefore, our research creates three kinds of products — policies, technologies and services. For example, how do you transit to a future that has lower greenhouse gas (GHG) emissions.

This kind of policy work is at the heart of what we do. What policies do we need to help India to achieve greater resource efficiency in the construction sector? What technologies can help small-scale industries like foundries to be more efficient?

Today 40 percent of new foundries use the TERI double blast cupola which we developed. Very recently, we developed a consortia of bacteria which can clean up soil contaminated with oil. All our refineries face this problem. In Kuwait since the first Gulf War there are large patches of land soaking in oil. So this consortia of bacteria can clean up such soil in three to four months and then you can grow plants on the land. Our goal is also to ensure such technologies are affordable.

The third is services. We have been developing energy audits for industry and rating buildings for their greenness. All this helps people, industry and governments move towards a more sustainable future.

How would you measure TERI’s impact over the years? What would you do to large-scale it?

The challenge is to use cutting-edge technologies to achieve a transformation. In a nutshell, it is about partnerships — working with other organisations to ensure policies are disseminated, that there are buy-ins from people and the media writes about it.

We are also looking at industrial partners. When we develop a technology we can do a few pilots but it is industry that large-scales it. How do we work with them and transfer this knowledge? We also work to ensure that concomitant changes, for example, financing, come into play. Therefore, we work with banks too.

What is TERI’s strategy under you?

Briefly, it will be different strategies for different things. For example, one of our challenges is to move the electricity sector off coal. We believe it is possible.

We generate so much coal that it can meet all our needs for the next 10 years. Post that, when we add capacity, we would like it to be from renewables plus batteries that produce electricity that is cheaper than from coal.

It means getting in batteries, testing them, telling electricity boards about those batteries and making sure the private sector can make them. Also, ensuring that regulations are in place so that batteries fulfil technical and commercial requirements and create a market in which battery performance improves and prices fall. We would look at a policy that would enable such an outcome.

In technologies we are looking at a ceramic membrane for sewage treatment. We will do a pilot but after that we need people who can work with ceramics and have an all-India marketing network for membranes. We also need management professionals who know how to work with municipalities. We will get all stakeholders involved at an early stage so that we can develop a
product that is of use to them rather than having to tweak it later.

How do you propose to work with so many stakeholders?

We have roundtables where we bring in people not just from industry but also the municipalities and the pollution control boards. This provides us with a reality check. It also tells them what is happening early on. Making change happen is a two-way street.

Are you on the same page with them? Municipalities and pollution control boards lack capacity.

The problem is in getting their time. When you say they lack capacity the reality is that there are probably three people who have 300 things to do. We reach out and tell them how important the initiative is. They understand and list it in their own order of prioritisation.

You work with government to ensure policy changes and that in turn seeds a large number of entrepreneurs who can large-scale the technology.

A classic example is the LED bulb programme. There was a business model. It aggregated demand through the consumers of electricity companies and looked at bulb procurement as a means of bringing down prices. Prices reduced from `360 for a bulb in January 2014 to `38 in September 2016 and in the process 2,020 million bulbs were sold. So this is a country where scale just has to be part of the equation of making change happen.

Feeding excess solar power into the grid is an ongoing issue.

There are two issues. First, regions where we can develop solar energy aren’t the areas where demand is high. So you need to build transmission lines. Solar energy is available for six-eight hours a day. That means for the rest of the time, transmission lines are not transmitting any electricity and that becomes expensive. We have been innovative and used money from the National Clean Energy Fund, a cess on coal, to do a viability gap funding for these transmission lines.

Second, electricity generated in power plants flows one way into our homes. If I set up a solar plan that generates more electricity than I can use I should be able to put it back in the grid. Several states have enabling provisions to do this. But the grid should be able to absorb it. That is not so straightforward. Grids have to invest in making that happen. That will take time particularly in urban centres congested with people, wiring and
high demand.

What do you see happening in the near future?

I see three things happening in the energy business. The first — and we are already seeing this happen — is increasing energy efficiency in lighting, air-conditioning and industry. Consequently, demand for electricity is not increasing as fast as we had thought.

In about 10 years all new additional electricity generation capacity will be solar, aided by batteries. That means we are on the cusp of a complete change in how we deal with electricity, where it comes from and how we use it.

Second, since we will have more power stations and electricity than what the electricity companies are buying, we will start seeing a lot more electric vehicles, for the simple reason that using electricity will decrease the country’s oil imports.

Third, as we make the transition to more renewable energy, the transport system also becomes less carbon-based. You can make internal combustion engines as efficient as possible but you can never make them zero carbon. But with this strategy it is possible. I believe economic forces will drive this change.

Is TERI getting involved in the public transport sector or in setting up charging stations?

We think the transition to electric will happen in two-wheelers and buses. The vast number of vehicles in India are these two. The other area could be led by the government. It could mandate that, say, from 2018 or 2020 all cars that the government buys would be electric. That would give a signal and create a demand.

We are deeply involved in regulations for two-wheelers and three-wheelers. For buses we are looking at financial modelling and policy.

For charging stations, we are looking at two different models. First, how do you have charging stations across the city. Second, what is the kind of regulation and business model that will make it attractive for electricity companies to set up charging stations everywhere including in residential areas
so that a person on the third floor can charge his or her vehicle.

We are also examining whether batteries can be easily swapped. So the old battery in my car can be quickly taken out and a new one put in. What could be interesting is to see if batteries can be taken to a large space out of the city and charged through solar energy. We would like policies and technical regulations to move us in this direction.

What can we learn from technological innovation abroad?

There is so much. Lithium ion batteries, Elon Musk’s work… but the country we are learning the most from is China. The number of electric two-wheelers in China is immense. Your chances of being run over by a two-wheeler in Beijing are very high because they are soundless. The largest number of electric buses anywhere in the world are in China. That’s where the lithium ion batteries are also happening.

TERI has seen ups and downs in the recent past. Your organisation’s processes, workplace ethics, decorum and many other things have been questioned. How have you dealt with all this?

We have put in place a multi-tiered set of interventions. As soon as I came in I asked a very respected colleague who left TERI 10 years ago to come in and talk on a confidential basis with anybody who wants to talk to figure out what are the concerns. That provided us a roadmap for the first set of interventions which were largely an HR process. We have also put in place a disciplinary code including rules for misconduct.

The second issue that became important to us was the way work was done. In a sense, people took the initiative and did things. Unfortunately, such a process became unstructured in many ways.

So we asked colleagues within TERI and outside to again meet people across the organisation and suggest how we could come up with an institutional structure that is impactful and more reflective of people’s own ambitions and professional growth.

Going forward, would you say the level of transparency being institutionalised now would preclude any such situations from happening easily?

What is clear is that in future people will feel more comfortable. If they don’t there are processes to handle it. The other issue is that the processes in place today apply to everyone, including me.