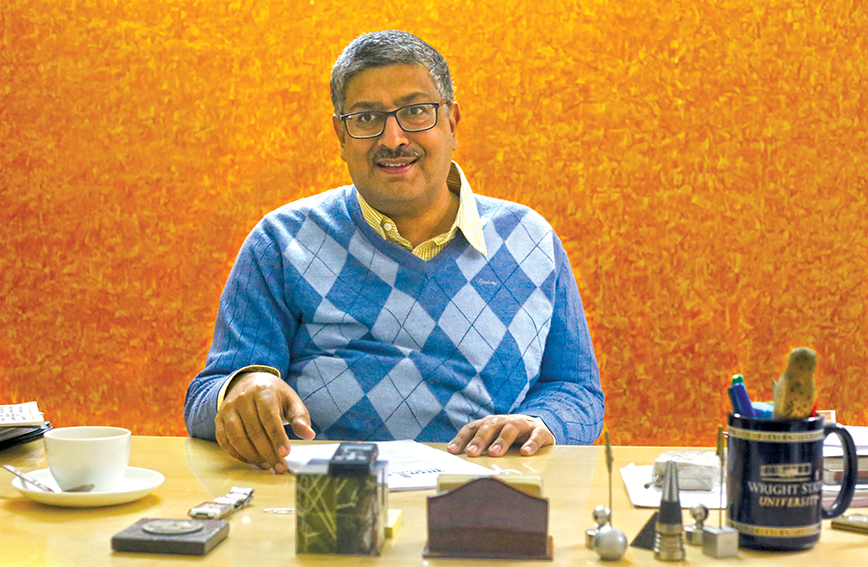 Javed Abidi: ‘Once a company opens its doors, even hesitatingly, it completely changes corporate culture’

‘Disabled people now have jobs in best of companies’

A new law on the rights of people with disabilities was passed in the winter session of Parliament. It had been all of seven years in the making. Now, 21 disabilities have been listed compared to nine earlier. The private sector has also been covered in terms of access though job quotas only apply to the public sector.

These are significant gains, but much remains to be done. “We are still a blip but earlier we weren’t even a blip,” says Javed Abidi of the National Centre for Promotion of Employment for Disabled People (NCPEDP).

The need for a new law was proposed to the UPA government because the 1995 law for the disabled was “unkind and arcane”, says Abidi. It took several rallies, dharnas and agitations before the UPA agreed to draft a new law.

Then began the long wait while the bill made its way from the centre to the states to the Rayja Sabha where it got stuck when the UPA lost the last election.

The disability rights movement that began in the mid-1990s has quietly gained traction over the years. People with disability are finding jobs, getting education and are no longer invisible to the nation. But the pace is still very slow. It is hoped the new law will speed things up.

Editor’s Note: This article was first published in 2017. Unfortunately, Javed Abidi passed away a year later on the 4th of March 2018 due to a chest infection. NCPEDP however, continues under a new leadership

You described the Rights of Persons with Disabilities law as historic. Why?

We are very happy with this law. At the outset I can concede that no law is perfect. I think that if you heard contradictory voices it is because they were searching for perfection. This process (of drafting a new law) started six or seven years ago. In our search for perfection we lost that many years. Honestly, I would give the new law 7 on 10. It gives us so much that we did not have.

I look upon disability as a movement. As late as 1995 we did not even have a law to protect our rights. Forty-eight years, nearly half a century since Independence, went waste. The 1995 law gave us a starting point. I refer to it as Phase 1 of the disability movement. This law skyrockets us into Phase 2.

There are things that can be improved or changed. We can go back to it in course of time.

What are the significant changes that have been made?

I personally don’t believe in the philosophy of quotas, to begin with. But the new law very categorically says that anything that the private sector constructs, whether it is universities or offices or shopping places, has to be accessible. In the education sector the previous law restricted accessibility to establishments of the government. The new one extends it to establishments funded by the government or recognised by it. This extends the responsibility of providing accessibility to the private sector.

The fourth significant gain is accountability and teeth which were not there in the 1995 law. Everyone is talking about the chief commissioner and saying he does not have enough powers. But what is missed is the section that talks of special courts where it categorically says all state High Courts have the power to set up special courts where cases arising out of this law can be fast-tracked.

There is so much in the new law for the blind and the deaf, which was not there in the 1995 law.

There is significant improvement. The whole rationale of setting up this organisation was to catalyse employment for those with disability, particularly in the private sector. The 1995 law restricted itself to providing us with two to three percent reservation in government jobs. Also, by 1995, the era of liberalisation started. Jobs were moving away from the government to the
private sector.

We were basically anti-quota. We felt an organisation was needed to create awareness and sensitisation, especially in the private sector. That’s how NCPEDP was set up. The first few years, even talking to industry was impossible. Every time I would knock on the doors of the FICCIs and CIIs, they thought I had come for a donation. We told them, we are not here for your money but to talk business.

That was the era when all of them had charters on children, women, the environment, HIV-AIDS, but nothing on disability. We had to sometimes arm-twist them. We had to organise dharnas and rallies against them.

Slowly the environment started changing and slowly they started listening to us, particularly the IT sector — that’s when the tide turned. Millions of people with disability have now got jobs in some of the best companies.

It isn’t only the IT sector anymore but the garments sector, the hotel industry, gems and jewellery…everywhere. The latest glass ceiling we have broken is disabled people getting jobs in an airline. If Indigo can give jobs to people with disability or Lemon Tree hotel can…I mean, I remember in the 1990s I went to the Hotels Association of India and they said, Sorry, we won’t touch people with disability with a bargepole. After some persuasion, they said, Okay, maybe we can consider them in our backroom operations but not the front office.

When I look back, it’s a mixed bag. Lots of companies are giving jobs. But if you look at the size of the Indian corporate sector and you realise as many as 5,000 or 6,000 companies are members of CII and then you look at how many are giving jobs to people with disability, that’s when the cookie starts to crumble. So we still have a long way to go but we are inching forward. This new law, once enforced, will give the entire disability movement a big push.

When companies hire people with disability, not one or two but many, does it change their corporate culture. How does it impact them?

It does, in a big way. Once a company opens its doors, even hesitatingly, it completely changes corporate culture. The disabled employees end up creating awareness and sensitise their fellow workers and the management.

I have interacted with some of the best brands and names in the corporate world that have hired disabled people and they haven’t regretted their decision. On the contrary, they have hired more. Take Lemon Tree Hotels. They are budget hotels, competition is tight and there is no charity there. They started by hiring one or two disabled people very tentatively. Now, 10 percent of their workforce comprises people with disability. They have gone on to employ deaf people, even those with Down’s Syndrome right there in their public areas
like restaurants.

The IT sector has hired people with serious disabilities. Many of them have become ambassadors for the disabled. That is how more companies are gaining confidence and hiring people with disability.

In the coming years the job market is predicted to become tighter with automation and so on. Do you need new skill-building and enterprise programmes?

Skill-building and enterprise are essential facets of life. Because the disability movement has skyrocketed, the movement is unprepared. It’s an unfortunate fact that we don’t have enough well-educated and highly skilled people with disability.  The reason is that our education institutions are inaccessible. So how do you go to Delhi
University and be on a par? Even our technical institutions, whether NIIT or Aptech, are
completely inaccessible.

In fact, I would say the opposite has happened. Suddenly, the job market has opened up for disabled people. But they aren’t well-educated and well-trained enough to take up those jobs.

Thanks to the 1995 law, our education institutions began opening up. Until 1997-98 even our IITs and IIMs weren’t open to people with disability. It was outright discrimination. We had to fight court cases, hold dharnas and rallies for the IITs and IIMs to open their doors. Today, hundreds and thousands of bright disabled boys and girls are studying in the top-most engineering and management colleges.

We monitor the top 20 colleges in 15 streams and the top 100 universities in India. So all these boys and girls are graduating and feeding into the job market. The civil services have opened up to disabled persons. It’s very dynamic and exciting.

I agree. Even today, post the 2016 Act, disability is a blip on the radar of this country. Politicians still don’t see the disabled as a vote bank, though India has 70 million people with disabilities and their families, on a conservative estimate. Back in the 1990s, disability wasn’t in the manifesto of a single political party. Now there is a paragraph or a page, so we have evolved. In the past one or two elections the BJP, Congress, Communists and AAP had disability rights in their manifestoes. We contributed to all of them. I don’t think that disability rights have percolated to the regional parties as yet.

Many of the changes we aspire for would take only the stroke of a pen and zero expense. I can understand if I say, make sure all buildings in Delhi become disabled-friendly in the next one year. We don’t have that kind of resources.

But why can’t we pass a stringent law or an ordinance which would say, No future construction without ensuring that it’s disabled-friendly? Or that no book will be published unless it is also available in an accessible version, as in the US? In India less that 0.5 percent of books are accessible to the blind.

Or take sign language on TV. The first time we raised it three or four years ago before Republic Day at the fag end of the UPA regime it became a war between us and the Ministry of Information and Broadcasting.

Why? We were just saying that when the parade is taking place, deaf people can’t hear the commentary, so just ensure there is an interpreter in sign language in a box. It’s inexpensive. We had to do dharnas, rallies, police, maar peet….