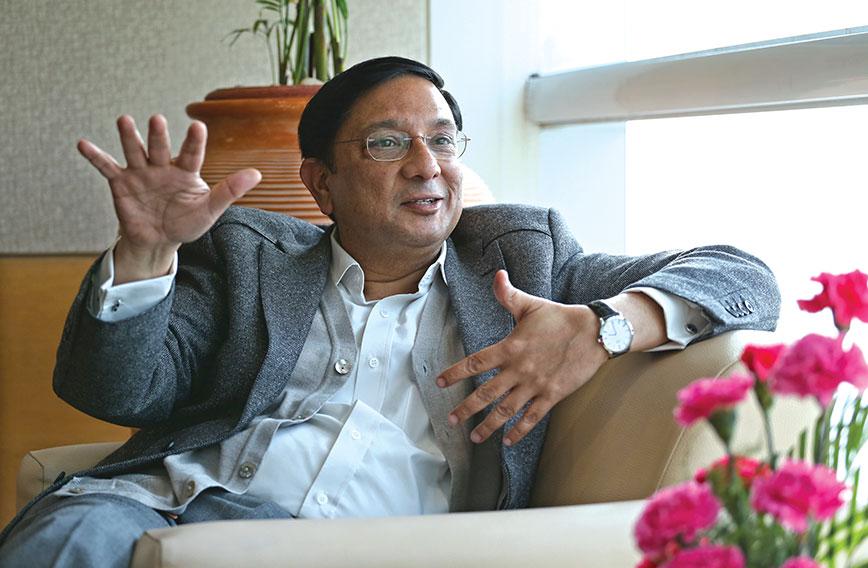 Vinayak Chatterjee: ‘There is no science to determine an exact fare’

Metro fares: Let a regulator decide on a hike

When the Delhi Metro Railway Corporation (DMRC) decided in May to raise fares to meet rising costs, it was faced with an outcry by politicians who said the hike was an unfair burden on commuters.

The first salvo was fired by the Aam Aadmi Party (AAP) with Chief Minister Arvind Kejriwal asking that the Delhi Metro should be handed over to the AAP government which could run it without fare increases. Deputy Chief Minister Manish Sisodia said he saw a conspiracy to favour private taxi operators.

Not to be left behind, the Congress also jumped into the fray, organising protests and promising a bigger campaign. The state unit of the BJP too joined in the criticism of the DMRC’s decision.

The fare hike was only the second in the history of the Delhi Metro and came after nine years. It was decided after due diligence in the Fare Fixation Committee and cleared by the DMRC board. Interestingly, the Delhi government has its own representatives on the board.

Finally, to  assuage the politicians, it was decided that the hike would be sent back to the Fare Fixation Committee for review.

But a bigger question remained: How should the Metro’s finances be managed?  In our search for an answer and to make some sense of the whole controversy, which well affect Metro Railway projects in other cities, Civil Society spoke to Vinayak Chatterjee, Chairman of Feedback Ventures and one of India’s most knowledgeable and public-spirited entrepreneurs on knotty infrastructure issues.

As someone who has been an insider to infrastructure debates in the country, how do you see the raising of fares on the Delhi Metro Railway?

There are two extreme positions and as with most things the truth lies somewhere in between.

One view is that urban utilities like transportation, water and to some extent electricity should be heavily subsidised by the government. The other extreme view is that infrastructure cannot be built in modern times without the concept of user-pay charges. The era of freebies is over.

My own view is that it is not easy in the case of the Delhi Metro to provide direct subsidies because there is no geographical anchorage. There is a large floating population and they use the Metro. In such a case the government should take a call and have a regulator who can balance the need for service delivery, affordability and financial return.

For precisely this reason, infrastructure projects all over the world have independent regulators. It is also why the Delhi Metro has a committee to determine fares. This Fare Fixation Committee must stand outside the system and take a balanced view. Like the electricity regulators it should set a fare for the Metro based on a comparison of fares of other modes and say that the government must subsidise the fare to the extent necessary.

Fare increases are needed to take care of inflation, input costs, increases in salaries and so on.

You have looked at the Delhi Metro. Do you think its fare increase is justified?

To be honest, I haven’t done a deep enough dive to give you a straight arithmetical answer to the question of where exactly the pendulum is striking between servicing capital and cost recovery.

But this fare increase comes after almost nine years of no fare increase. I refuse to believe that Delhi Metro employees have not got salary increases, that inflation has not been at 5 percent…so to say that fares should not be increased after nine years is a non-starter. Fares have to be increased. But has the quantum been right is the question.

I would like to believe that the people who have suggested the fare hike have done so after a lot of stakeholder consultations. I would believe that the members of the Fare Fixation Committee have applied their minds to the fact that the fare increase comes after almost nine years, that the Metro has started making losses, that there are demands for increasing services on existing lines and in opening new lines. A fare increase is justified. Whether it is exactly what it should be is for the people who have looked closely at the economics to say.

So, what is needed is professional, independent regulation to get it right?

Exactly. You need independent regulation which can provide a balanced view. A view will always be subjective. There is no science to determine an exact fare. Everything hinges on how independent is the independent regulator. This problem is not limited to the Delhi Metro. It is with every utility in the country, particularly with electricity. The political class, pardon me for saying so, has a half-life which is five years and in certain instances one and two years. The pendulum, therefore, tends to swing towards populism.

In electricity, there are many examples of successful regulation.

Yes. With stakeholder participation to determine tariffs and revenue.

So we aren’t without a model. Would you say a similar regulator is needed for the Metro?

India has a decent record. Take the Securities and Exchange Board of India (SEBI), which takes care of the interests of small investors. There is also the Insurance Regulatory Development Authority (IRDA), which I think has done an excellent job in regulating the insurance industry. The Reserve Bank of India regulates capital markets and interest rates. So the concept of independent regulation exists. The real question is whether the regulator is truly independent.

One needs to then go beyond a price fixation committee.

In the case of the Metro, the technical aspects are still under the Indian Railways, which looks at operational issues, safety and so on. The fare hike comes from the Fare Fixation Committee, which in economic terms and the terms of this debate, is the right thing to do.

Society has to ask whether the independent regulator is really independent. If he is, allow him over the years to make some errors of judgement. A little swing from what you desire — plus or minus 20 percent — is within the margin of error on issues of subjective judgement, like this one, on which there is no clear-cut answer.

In the case of an infrastructure project where there is an entrepreneur, there is the risk of gold plating project costs and unjustifiably raising tariffs. But in the case of the Delhi Metro this isn’t a possibility, is it? It should be much simpler to fix fares.

It is because there is no suspicion. You start with the accounts and costs that were presented to you.

With the clear assumption that they were all in the public interest.

Yes. In the Delhi Metro case it is easier. But remember there is also the Hyderabad Metro, which is a PPP project. Going forward, the policy also mandates PPP in operations and maintenance. I’m not sure what has been thought of in Lucknow or Mumbai. I’m in favour of mandating a Fare Fixation Committee in all these projects to bring transparency.

In Delhi, it is interesting that the political class backed off because the DMRC board said its charter is to accept the decision of the Fare Fixation Committee. The political class accepted this. There have been protests and murmurs. But the concept has stood the test of conflict.

The Delhi Metro has cash but it also runs losses because of depreciation. Now this is being questioned. People want to know why it is raising fares when it has cash.

Railways at one time had a strong depreciation fund both for safety as well as renewal. The cash got completely used up and therefore you have a situation today when the entire system has become a safety hazard. Depreciation is the premium you pay to secure your future. If you want to give that up for the sake of populism, you are sacrificing the benefits of the service for future generations.