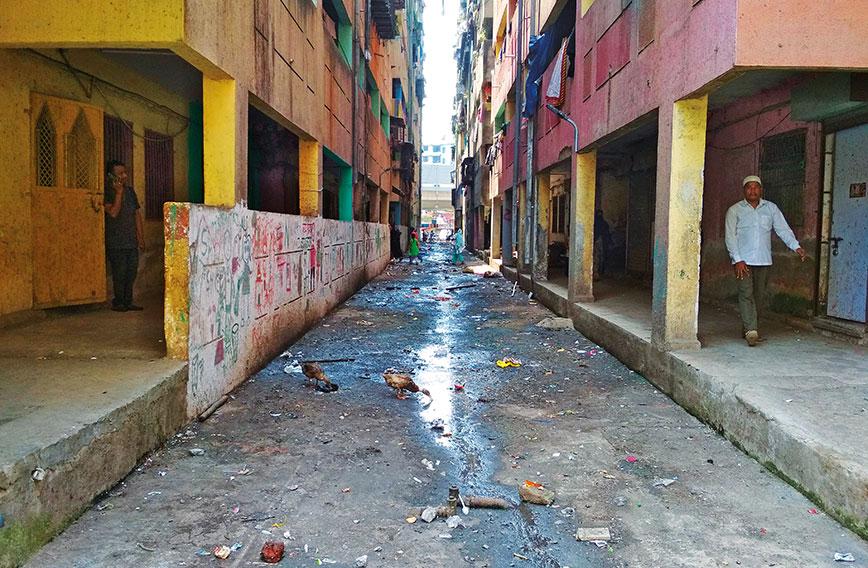 Buildings built close together in a resettlement colony in Mumbai

When buildings are hotspots for tuberculosis

A study of three high-rise resettlement colonies in Mumbai has shown that there is a link between the spread of tuberculosis (TB) and the lack of sunshine and ventilation in apartments built closely together for too many people.

The role of the built environment in promoting better public health and controlling the spread of diseases is well known.

But this study is the first of its kind in India to look at the problems that can emanate from buildings that don’t take into account the open space and fresh air needs of residents.

The study identifies Mumbai’s resettlement colonies as hotspots from where TB spreads to the rest of the Indian financial capital and adds to its rising graph of cases.

The findings have relevance for all Indian cities where slumdwellers are being evicted from shanties but rehoused in conditions so poor that infectious diseases abound and spread to other areas.

The resettlement colonies in Mumbai are where large numbers of people who are part of the informal sector live. They work in homes and offices, drive taxis and ride in buses and trains and transmit infection through the day.

The study was conducted in high-rise blocks built to resettle slumdwellers at the Lallubhai Compound, Natwar Parekh Compound and the PMG Colony. They are all located in the M-East municipal ward of Mumbai where the incidence of TB is known to be higher than the national average.

Researchers interviewed residents, computer simulations showed up design flaws of the buildings and location visits verified parameters like airflow and access to sunlight.

It was found that the lower flats had a greater number of cases of TB. But even the flats on the upper floors in the Lallubhai and Natwar Parekh compounds were not much better off.

A different picture emerged at the PMG Colony, which has a lower density of 630 households per hectare. There were fewer cases of TB here. The buildings had come up several years before those at the Lallubhai and Natwar Parekh compounds and were farther apart. The flats had better ventilation and access to sunlight.

The study finds that regulations for slum resettlement and redevelopment buildings have been steadily relaxed since 1991 with regard to unit density, open space and distance between buildings. There has also been lack of regulation for window design, light and ventilation.

To accommodate more people the buildings have gone higher. At a height of 24 metres, the distance between buildings should have been eight metres. Instead it is three metres because the regulations have been tweaked to benefit contractors and developers.The result is congestion, a lack of ventilation and conditions in which TB germs flourish.

“A stark difference in the quality of light and ventilation can be seen in PMG Colony vs Lallubhai and Natwar Parekh compounds. In PMG Colony, the distance  between buildings is mediated through courts measuring 15m x 15 m. Each building also has internal light courts measuring 5x5 m. This provides for cross ventilation in the colony and interiors of buildings,” says the study.

The PMG Colony came up in 1997, Lallubhai between 2003 and 2005, and Natwar Parekh in 2008. Over time the rules have been relaxed and living conditions have worsened.

Doctors For You, an NGO consisting of physicians who try to support the public health system and also make themselves available during natural disasters, has been running a programme for eradication of TB at the Lallubhai and Natwar Parekh compounds for the past eight years.

It found a growing number of cases and also recorded the death of a young girl from multi-drug resistant TB.

Ravikant Singh, founder of Doctors For You, says: “For the past three years we were thinking of how a study could be done to explore the correlation between built spaces and TB in Mumbai. We applied for funding to the Mumbai Metropolitan Region Environment Improvement Society and got Rs 18 lakh. The study finally cost us Rs 23 lakh.”

Doctors For You teamed up with the Centre for Urban Science and Engineering at IIT Mumbai which did the computer simulations. A multidisciplinary team did the research.

The study emphasises that design and structure which take into account livability standards are particularly important in resettlement colonies. The residents are poor and won’t opt for technological solutions like air-conditioning and exhaust fans to improve ventilation. Even if they do, what is needed are fresh air and sunshine to stop the spread of diseases like TB.

The study points out that among Mumbai’s 24 wards, the M-East ward has reported high TB prevalence. The Chembur area had 3,452 TB cases whereas the Govandi area had 4,642 TB cases in 2016-17. This amounts to a prevalence of 758 cases per 100,000 persons in Chembur and 1,055 cases per 100,000 persons in Govandi, about three to five times higher than the national average. Both areas fall under the M-East ward.

This high burden and mortality rate result in sizeable economic and social costs, making it a critical issue to address.

The study proposes that regulations for resettlement buildings be changed so that housing conditions become liveable and the health of the residents is not compromised because of shortcomings in design and structure.

Since the average household sizes are more than five persons, the number of residents is significant and as carriers of a disease like TB in a congested city like Mumbai they have the capacity of infecting others on a large scale.

Some of the measures that could make a difference are easily done such as having windows opening out instead of sliding. In sliding windows, only half the opening for the window is used thereby reducing the quantity of air entering the dwelling.

But for the most part, the significant changes that are needed have to do with the structure of the buildings. The study therefore looked at factors like ‘sky view’, ‘daylight’, ‘daylight autonomy’ and ‘natural ventilation’. These technicalities were at first assessed through computer modelling and then verified in dwelling units.

On all these counts the Lallubhai and Natwar Parekh compounds fared poorly. The PMG Colony did better. But all three colonies need to be improved. Also buildings that are going to be built must not embody the same mistakes.

The M-East ward in Mumbai is regarded worldwide as a hotspot for the spread of drug-resistant TB. It is characterised by slums and squalor. The situation is not much different in other Indian cities. The study shows it is not enough to get people out of slums. They should be housed  in conditions which promote healthly living and  reduce the disease burden on cities.