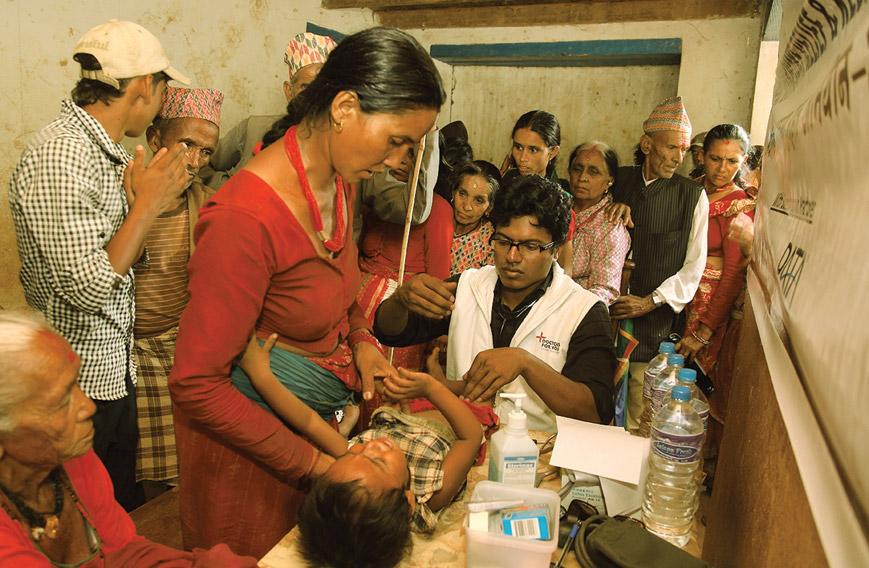 Doctors For You providing medical aid during the Nepal earthquake

Several major natural disasters in the past few years have destroyed properties, taken lives and pushed tens of thousands into poverty. These episodes have occurred across India and on a scale not witnessed before. Catastrophes in Uttarakhand, Kashmir and, most recently, Chennai, have shown up local administrations as being unable to cope with the huge demands made on them in such situations. Clearly lacking is preparedness to deliver emergency medical aid, rescue people and rehabilitate survivors.

Government can’t do without the efforts of voluntary agencies and the latter need the support of the government to be effective. There is an urgent need for shared learning. Doctors For You has served in the trenches of these emergencies. They have been working closely with the Union and state governments and district administrations to provide quality medical relief. As public-spirited physicians it has been their mission to strengthen health services. But what have they learnt in the disaster situations that could perhaps lead to more coordinated efforts?

Even in the case of the unprecedented calamities witnessed in Chennai, Uttarakhand and Kashmir it would have helped if there had been at least a minimum plan in place. Across states there is inadequate preparation for worst case scenarios. For instance, if a hospital is destroyed what should be an alternative facility? Or if people have to be rescued and moved out, where should they be put?

“The attitude is the typically Indian one of dealing with a situation when it arises. But that is just not good enough in emergencies on the scale that we have been witnessing. We have to be ready with specifics,” says Dr Jain.

It is not as though disaster management plans don’t exist. Some plans have been well drafted, based on established models, but they exist only on paper. They haven’t been read, internalised and made locally relevant. “There was a state we were working in which had a very good disaster management plan, but we found in the course of our meetings that senior decision-makers in the government hadn’t even read it,” says Dr Jain.

It is also important for governments to identify the voluntary agencies they want to work with and have them on tap even before an emergency situation arises. It is necessary to assign lead roles so that there is better coordination and down the line in the administration there is acceptance of voluntary agencies.

“Voluntary agencies can only work through government. And government can’t do without the support of voluntary agencies in a disaster situation. So, clarity and designated roles are in everyone’s interest. In Chennai, we were given the lead role in Zone 4. It makes things simple because we know what to do and others know who to coordinate with,” says Dr Jain.

Dr Ravikant Singh, president of Doctors for You, points out that it often takes time to get government permissions to serve in a disaster zone. It took two days for permission in Chennai. If the government acknowledges in advance whom it wants and needs to work with the permissions can come that much faster.

Often governments at the state and local level don’t want to admit that they aren’t prepared, says Dr Ravikant Singh.  Bringing in voluntary agencies is like admission of failure. So it becomes a political question. The reluctance to admit that the government can’t do without the support of voluntary agencies leads to delays. Coming to terms with these realities in advance can save time and lives.

Working in a disaster zone means coping with innumerable issues and uncertainties. “If it took two full days to get permission in Chennai it took a lot of time in Kashmir. It took us a lot of time also to gain acceptance among the people there. When our assessment team went there people turned them away saying they had come from the government and they didn’t want government help,” says Dr Jain.

Disaster situations therefore pan out differently. Creating universal systems, choosing players objectively well in advance and educating people about emergency measures can do away with the uncertainties and speed up interventions in situations when no time should be wasted.

It is also important to have a longer vision for restoring normalcy. “Once the media is gone and the cameras have been switched off, relief work begins to slacken,” says Dr Jain. “We have also seen that in a disaster VIP areas get the most attention. But it is the nearby rural areas that are the worst affected and they don’t get the attention they should. There should be some rationalisation of this aspect,” says Dr Jain.

In Uttarakhand and Kashmir, for instance, relief efforts haven’t been completed.  A great deal of repair and restoration remains to be done. “In Kashmir there are villages which are in bad shape. They were always in bad shape but because of the calamity they have gone 10 years back,” says Dr Jain.

There is also little institutional learning. “You will recall that there were pictures of CT scan machines under water in a hospital in Srinagar,” says Dr Jain. “The new machines have been placed in the same place. When a flood happens next the machines will again be damaged.”

“You cannot help it if there is a disaster. But you need to prepare yourself so as to minimise the damage,” says Dr Jain. “In Kashmir, Uttarakhand and now Chennai there was wrong construction, which worsened the situation.  It is important to recognise this and rectify it. It won’t do to build in the same way again.”

There is no formal disaster management training at the MBBS level. There should be a proper curriculum in MBBS and paramedical courses. Doctors For You provides training to government healthcare professionals. It can be basic stuff about saving a drowning patient and placing him/her in a recovery position, which is laterally with one leg bent and the other straight.

“We have customised our training. You can call it basic disaster life support. We look at the role of the doctor and the role of the paramedical staff. In a disaster scenario your resources are limited so it is important to understand triage, which is basically focussing your resources to get the maximum impact. If a patient has no chance of survival it is better to pay attention to those who can be saved. Or sometimes patients who are only minimally injured demand the most attention, but should be made to wait,” explains Dr Jain.