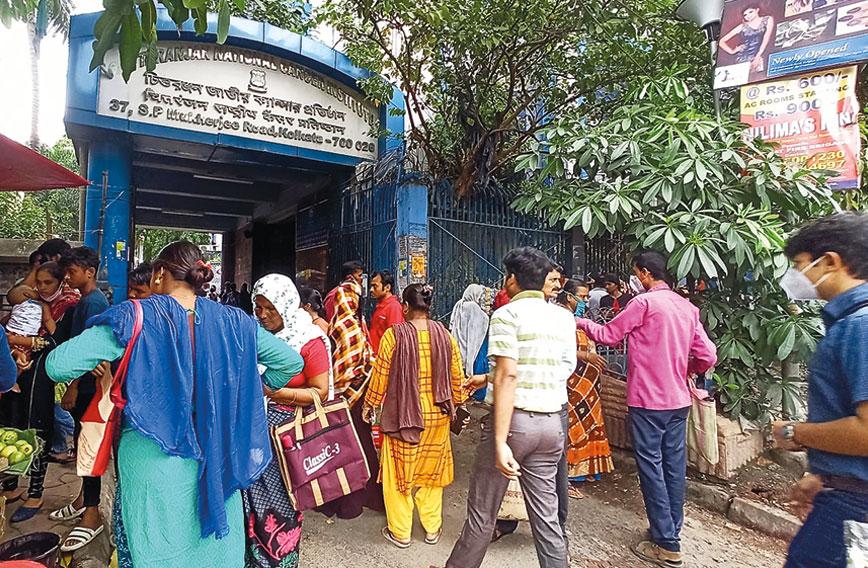 A rising tide of cases: Crowds outside the Chittaranjan Cancer Hospital in Kolkata. There is a growing need for better diagnosis and treatment facilities

THERE are nine fingers that SC has now. The thumb of his right hand was removed to save him from sarcoma, a form of cancer that affects joints and tissues. Amputation is required to remove the affected part and save the rest of the body.

In SC’s case, it was done just in time. When he looks back on the call that he made to fly out to America and undergo surgery, he realizes how close it all was.

The problem began with the thumb beginning to swell. At first, he didn’t bother about it. A slight inflammation was no big deal. He had been a TV anchor and spent more than two decades as a journalist. Caught up in the hurly-burly of headlines, one tends not to think about one’s health. The days fly by in a blur. There is a blissful invincibility in a life of daily deadlines.

But SC’s thumb continued to enlarge, prompting him to visit a doctor. The first opinion was that it was an orthopaedic problem. Something to do with the bone. Next was the diagnosis that it was a tumour.

Tests followed which included an MRI for which SC was expected to hold his thumb in a single position for an hour. Then came a biopsy with the declaration that he didn’t have cancer.

On the verge of going ahead with an orthopaedic intervention, SC remembered that he had an old school friend based in Boston who was a cancer specialist.

He had a chat with him and sent his reports across. Back came the opinion that this was sarcoma, a cancer that affects tissues and bones, and that amputation was the only answer.

His Boston friend connected him to the best person in the field at the Mayo Clinics in the US. The same biopsy samples that had been cleared for cancer were flown surreptiously to the US and the result this time was it was indeed cancer.

SC had a sarcoma which required amputation of the thumb. Tinkering with it, as had been suggested, would have sent the cancer cells scurrying through his body and into his lungs.

Removing the thumb was the only way to stop the cancer from spreading. There was a date available for conducting the operation, but SC would have to fly down to the Mayo Clinics without delay. It was a crazy and lonely decision for him and his wife to have to take.

But, the diagnosis made, they also had a precedent to go by. SC wasn’t alone. SC’s colleague, actually his boss, let’s call him RB, had lost his right leg in much the same way to amputation to save him from sarcoma many years earlier in his youth.

The leg was diagnosed by specialists in the US as being afflicted by sarcoma even as doctors in India couldn’t decide on a path of action.

RB told SC not to waste any time but to fly out to the Mayo Clinics and have the surgery done. Money was not an issue and it was what he finally did. It saved his life.

As the incidence of cancer rises in India, so does the need for accurate diagnosis and treatment facilities. Vast swathes of the country don’t have the specialists or the hospitals that should be available for a rising tide of cases.

The most unnerving stages in a cancer patient’s journey are diagnosis and the choice of treatment. Cancer is a complex disease and the right specialist is needed for each kind of cancer.

The sarcoma in SC’s thumb wasn’t being diagnosed because he was going to physicians who didn’t have the expertise to do so for this particular cancer. The day he got to the right specialist, and he was lucky that he did, everything became clear.

SC was empowered, well-off and fortunate. Millions of poor patients don’t even know where to begin. The very mention of cancer is like a death sentence because of the cost of treatment and the complete lack of knowledge about the disease.

It would have been much easier for SC if he had known of Navya. It was precisely to deal with the kind of problems that cancer patients like SC face that Navya, a company, was launched 10 years ago. Based in Boston in the US, it currently serves about 1,400 patients a month.

Navya relies on an online process to take a diagnosis to the specific experts who should be consulted. It has 300 specialists on tap across the world. A treatment pathway is provided to the patient within 24 to 48 hours with the odd delay.

The cancer patients Navya serves are mostly poor and from India. They either connect with Navya directly or through NGOs and hospitals that are in a loop it has fashioned.

Navya takes a one-time fee of `8,500 which comes to `10,000 when you add GST. The fee covers advice from experts, interactions to explain the treatment in the patient’s preferred language and invariably multiple hours of counselling.

Speaking to Civil Society from Boston, Gitika Srivastava, one of Navya’s founders, is eager to clarify that Navya only involves itself from the stage at which a diagnosis has already been done. It provides a treatment plan based on the best advice available which it knows to access reliably.

“Once you have that information you have to figure out what to do with that diagnosis. What is the right treatment pathway. That is where Navya comes in end to end,” she explains.

Consulting the right experts for a particular kind of cancer is important and there are “only a few of them”, she points out. Past outcomes on patients are also invaluable at the time of treatment and experts come with that experience and knowledge.

“So, you might start off with chemotherapy and figure out that the patient is not responding to it. Then you want to be able to know what the experts did for those five cases or 10 cases or 50 cases in which the patient was not responding,” she elaborates.

Treatment decisions determine outcomes and costs and getting informed advice is important because “cancer is complex and no two patients are the same, no tumours are the same”, as she puts it.

“The cost of radiation is only relevant if you should get radiated and if you get radiated then what type of radiation and when is it going to make the impact maximize. The right treatment option is what determines your outcome and what you spend for. I want to spare my tongue; I want to be able to speak even if it means I am going to pass away like one year sooner. Those decisions are what impact your quality of life, etc. So that is where Navya basically plays a role,” she says.

Navya is a company which has the verve of a voluntary organization. It has two arms to it. The main entity is in the US and the core IP data model and algorithms are owned by it. There is also an Indian subsidiary.

In India it started by working with the Tata Memorial Centre (TMC) which is “our flagship partner in India, because we are so well aligned in mission, vision, principles”.

They began with just offering expert opinions and then that expanded to what is called the National Cancer Grid, which is a programme of the TMC supported by the government but involving both private as well as public cancer centres.

Srivastava has a bachelor’s in computer science from Harvard and an MBA from MIT. She has over 17 years of experience as an entrepreneur and investor in technology and healthcare. She holds patents in distributed networking, databases, search technologies and automated decision-making.

Dr Naresh Ramarajan, who is the other founder of Navya, graduated from Harvard College and Stanford Medical College. He leads Navya’s research and development as their chief medical officer. He holds patents in medical search technologies and has multiple publications on medical decision-making.

“About 80 percent of the patients who come to Navya are low-income patients and so we work with NGOs who basically bring us the patients. It is tough to offer free care to people who cannot afford to pay because you don’t know how to reach them. Our challenge is how do you get people to be aware that we exist for them to use us,” says Srivastava.

What do they do with a diagnosis they do not agree with? “The process is to build consensus. And two things are extremely clear — the final treatment decision is a joint conversation between the patient and the family and the treating physician because we cannot dominate and dictate,” says Srivastava.

“The objective is the same for all of us. There is one mission which we are all after, which is to standardize evidence-based, expert-backed cancer care and so our job is to scale up that access to as many patients as possible across the country.”

“There is no discrimination if you can’t afford something or don’t understand oncology or English or whatever. Whether you live in Patna or Mumbai it should be the same access to care. And you should be able to understand it and so the singular mission is to standardize care. And we use technology, people, experts to do it,” she says, explaining the need to reach a vast base of people who need better care.

In healthcare there is an asymmetry of knowledge between the doctor and the patient. When dealing with people who are poor and lacking in basic education, the gap is even greater. How does Navya deal with it?

“I would say that it is a fundamental premise of Navya which is to convert patient-speak to physician-speak, which means condensing a patient’s concerns in a way that experts can quickly follow and provide their opinion in like five minutes,” says Srivastava. “Then to convert physician-speak back to patient-speak, to basically explain this in layman’s language. It is the whole value addition of Navya.  Our reports are meant to be understood by seventh graders.”

Navya speaks to patients in languages they understand. It could be Bengali, Hindi, Odia or Tamil. It ensures they understand what they are going to do. For low-income patients, an NGO with a local presence does the job.

“I would say low-income patients are driven to get the best care for themselves or their families. They will find a way to send you reports, be available on call and so on. They are very collaborative,” says Srivastava.