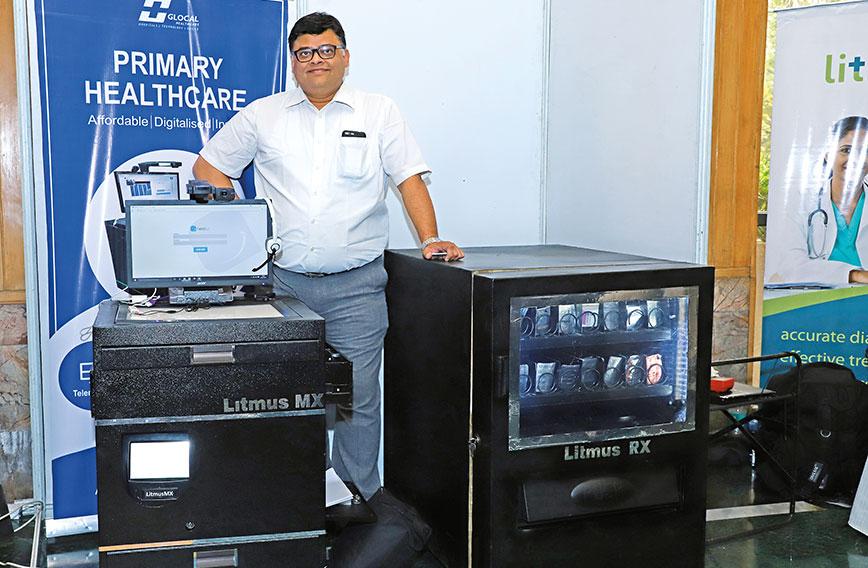 Dr Syed Sabahat Azim: ‘We have pivoted to a place between secondary and tertiary care’

Urban areas in India have been steadily expanding with small cities and towns attracting a rising number of people. But what about medical facilities to meet their growing healthcare needs?

Government-run hospitals and centres in far-flung districts are mostly in bad shape. Private clinics and nursing homes provide services of a kind. So, when a stroke or heart attack or road accident happens it is often fatal. Ferrying a patient to a big city is mostly impractical and invariably too expensive.

Glocal Healthcare Systems, a social enterprise, says it has found a solution. It has set up 11 low-cost hospitals in small cities where reliable and affordable acute care is now available. By the end of this financial year, it hopes to have seven more hospitals and a total of 2,000 beds across them.

Glocal’s model is to provide the best standards of treatment at locations where government facilities are lacking and private hospital chains don’t find it profitable to go. Over the past six years, Glocal has built well-equipped hospitals and put medical teams in place at such unlikely destinations as Bhagalpur, Muzaffarpur, Behrampur, Begusarai, Amroha, Mednipur, Krishnagar and Jeypore.

As a social enterprise, Glocal can’t be driven by profit alone. It has the twin goals of reaching people who need healthcare and being sustainable in business terms. The two objectives go together.

Originally, acute care in small cities wasn’t Glocal’s focus. It set out first in West Bengal to provide primary healthcare to catchments of 30,000 people at the level of a block. It was through the Rashtriya Swasthya Bima Yojna (RSBY)  that it hoped to have a steady revenue stream.

The role it saw for itself at first was to give patients basic facilities to deal with common ailments. A Glocal hospital would fix a hernia or remove a gall bladder or handle a gynaecological issue. It would offer professional standards at reasonable costs in tune with RSBY limits. (See Civil Society cover story, March 2013.)

But the model did not work because of several reasons, including delayed payments and the lack of transparency under RSBY. Over time Glocal had to close down two of its five hospitals in West Bengal.

A rethink followed and Glocal found it more viable to look at small cities with a population of 100,000 instead of a block with a catchment of 30,000. It also decided that it was better to focus on acute care for which there was a demand. It continues to provide basic services but they are no longer its focus because it learnt from its experience in West Bengal that people prefer clinics and nursing homes with which they have old associations. It is difficult for a new Glocal hospital to make an entry in the basic care space.

Dr Syed Sabahat Azim, Glocal’s hugely energetic CEO and founder, says: “The first hospital at Sonamukhi was well designed and staffed with passionate people. It was the perfect hospital except for the fact there were no patients! We realised that a large range of services was available in that area. Now we might not consider those services to be good, but people were using them. We still do general medicine, pediatrics and gynaecology but that is no longer our focus.”

“Instead, we have pivoted to a place between secondary and tertiary care. We now deliver what local nursing homes cannot provide. Acute care is one of our main areas — emergency and ICU. We have cardiology, neurosurgery, orthopaedics, trauma, respiratory diseases and nephrology, ” says Dr Azim.

There was also the realisation that in financial terms very small hospitals are not viable. Glocal’s  first hospitals were envisaged as 30-bed hospitals at the block level. But the cost of services you need to run a hospital are higher over a few number of beds. It is more expensive to run a small hospital than a large hospital.

“In terms of population density we found a sweet spot in towns with a 100,000 population,” says Dr Azim. 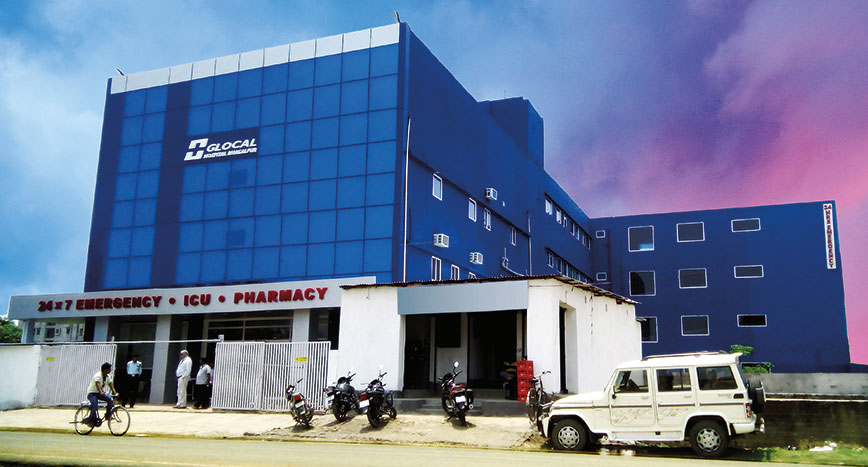 The shift to acute care happened as a part of this learning. The patients who were going to Glocal’s early hospitals were doing so when they were about to die and not for basic services. Glocal couldn’t turn them away or send them anywhere else either. So it began saving lives and that finally became its new focus.

“I wouldn’t say it was great strategic thinking on our part though in hindsight it looks very good. We started attempting to handle these cases. Initially, we were scared and would be calling up neonatologists and intensivists asking for advice. But we started getting results that were much beyond our expectations,” recalls Dr Azim.

“Last year we had a mortality rate of 8.5 percent across all our ICU beds, which are almost always full. As a reference, the US average is 12 percent and the Indian average, though it is not published, is said to be 18 percent according to a study in 2015.”

Glocal works on the assumption that 95 percent of all morbidity comes from 42 diseases. It also seeks to be entirely process and protocol-driven in delivering  treatment. It does not believe in hiring top doctors and instead invests in an assembly line of skills.

Glocal’s assembly line approach has equipped it well to be a provider of acute care services and it made the transition quite easily.

“We are an assembly line, process-driven, protocol-based healthcare system. We believe that medicine is a science and that it works,” explains Dr Azim.

“There are protocols for treating someone who has had a stroke or heart attack or been in a road accident and if you train people these protocols actually work. In acute care you are not actually bothered by why it happened but about fixing what is happening right now. You work backwards. There is a protocol for 0-2 minutes, 2-5 minutes and so on. It is very amenable to an assembly line because you have to respond quickly and by adhering to the protocol,” he says.

“For this you don’t actually need top doctors but people who can follow instructions. We also run closed ICUs, which means once a patient is admitted the people inside the ICU have the responsibility and authority to do whatever is necessary,” he adds. 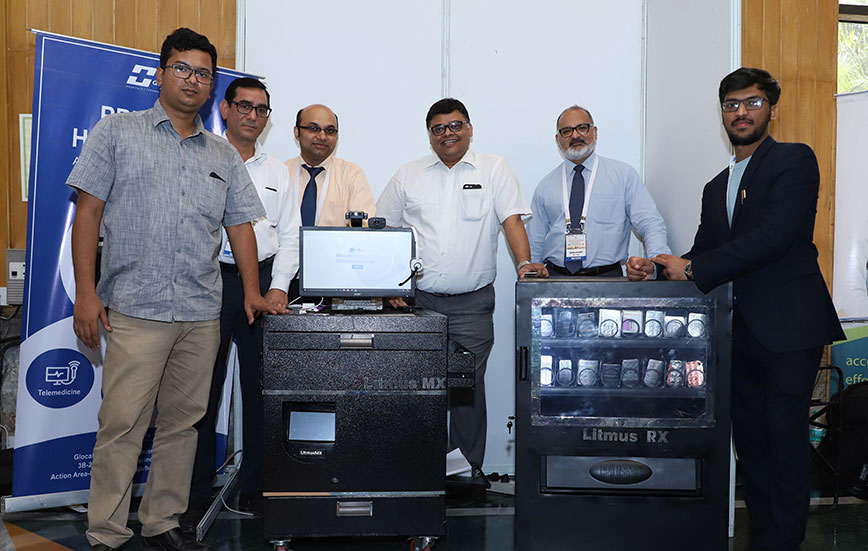 Dr Azim with Glocal team members at a conference on rural healthcare in Delhi. And below: A nurse checks a patient  in a digital dispensary. The Litmus RX and Litmus MX machines on which the dispensary depends are on the right

Dr Azim argues that the space for healthcare is in the small cities and towns. What is needed is an economic model and Glocal seems to have found it by marrying non-negotiable social objectives with business discipline.

An important part of Glocal’s strategy is to have its doctors on salary rather than in a revenue-sharing arrangement like most private hospital chains. With fixed salaries, Glocal's profitability increases as occupancy rises. A Glocal hospital can be profitable at 20 percent occupancy.

Glocal believes that there are enough doctors being produced in the country. The problem is to find jobs for them. A neurosurgeon will need to spend 10 years building a practice in a big city like Kolkata because senior doctors will guard their turf.

“Now large hospitals and large cities are not going to come up 10 in a year. We at Glocal are probably the only people doing neurosurgery in very small cities and towns,” says Dr Azim.

Geography is key to Glocal’s business strategy and  determines its financial viability. Hospitals are in clusters and along  highways. This means doctors can move easily between facilities and other resources, too, can be shared.

“Small cities which are on the national highways and connected with each other make it possible to move critical manpower from one place to another. So also with the supply chain,” says Dr Azim.

“If you look at the National Health Protection Scheme or NHPS, which will be rolled out despite initial problems, where is the expertise to deliver healthcare at the costs it envisages except at Glocal," he points out.

It works well for Glocal as a business and in terms of social good it takes professional healthcare to underserved people who can't spend much. 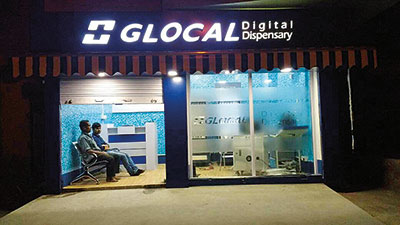 For the primary healthcare part of its mission Glocal now has the digital dispensary, which is a computerised unit at which several tests can be performed. This is an important innovation for reaching healthcare to people in remote areas.

For instance, 25 different tests can be done in 12 minutes using just two drops of blood. ECGs and ultrasounds are performed and a physician is consulted through telemedicine.

The digital dispensary is an important component of the Glocal strategy because it links the hospitals in small cities to the rural areas.

It could be the future of primary healthcare as internet connectivity reaches panchayats. Compared to the traditional primary health centre, the digital dispensary needs only a qualified nurse. 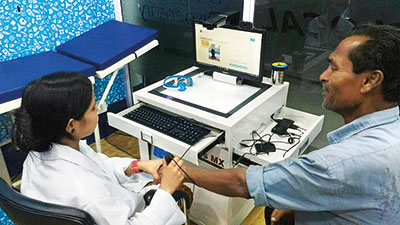 The nurse feeds data into the computer. Based on the tests and symptoms the patient is experiencing, the computer provides a list of possible disease conditions.

The doctor sitting far away can use the electronic stethoscope to hear the heartbeat and check out the lungs of the patient. The derma scope will allow the doctor to look at a rash.

Finally, it is the doctor who decides on the line of treatment and once that call has been taken instructions go to a dispenser which provides the medicines in the correct dosages.

Glocal’s digital dispensaries are attracting the attention of state governments. There are 100 in Rajasthan and Odisha is next in line.

A visit to a digital dispensary could cost as little as  Rs 225, which is significantly lower than what a patient may have to pay while visiting any other clinic.

As India seeks to  expand its healthcare infrastructure, Glocal is perhaps a good example of how social goals can be coupled with the efficiency and inventiveness of private enterprise.