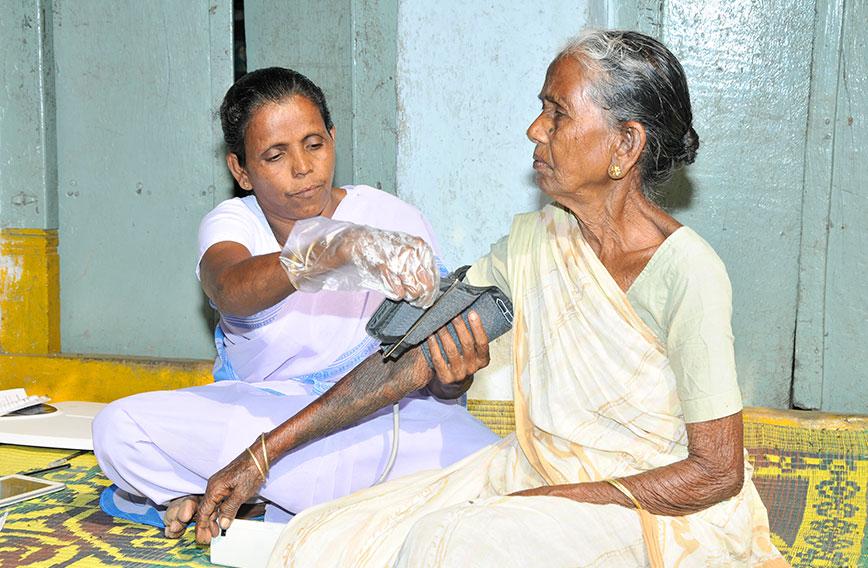 Arising graph of blood pressure and diabetes cases in India has been found to include rural areas as much as cities, the poor as much as the rich. But what can be the strategies for dealing with these diseases when awareness is lacking and medical facilities aren’t up to scratch?

The George Institute, which dedicates itself to bridging the gap between theory and practice in matters of public health, has come up with some interesting insights based on an initiative over two years in the West Godavari district of Andhra Pradesh.

Working in 54 villages since July 2014, the institute used public health workers to identify individuals at risk of cardiovascular disease (CVD) because of blood pressure and diabetes, provided counselling and encouraged them to seek treatment.

The aim of the effort was to see whether the public healthcare system could be sensitised and successfully deployed to address challenges in dealing with non-communicable diseases in a rural population.

Using its SMARThealth platform, the institute screened 53,478 persons above the age of 40 in 54 villages. Of them, 16 percent were found to be at high risk of CVD and were referred to a nearby primary health centre (PHC). Of these high-risk patients, 40 percent consulted a PHC doctor and 38 percent went to a private practitioner. When follow-ups were done with 85 percent of these high-risk patients, it was found that 75 percent of them were taking their medicines.

The success of the effort is not merely in adding up these numbers but in marrying the public healthcare system with technology. A total of 240 ASHAs or Accredited Social Health Activists were trained to promote awareness and measure diabetes and high blood pressure. They learned how to use the SMARThealth computer application on a hand-held tablet which recorded these readings and showed risk levels. At the same time, 18 PHC doctors were trained to use the data the ASHAs were collecting.

SMARThealth not only takes in data but provides comparative information about the readings to the person being screened. For instance, how does a smoker’s longevity improve by becoming a non-smoker? Or, how do exercise and better diet reduce obesity? The tablet also shows educational videos. The data collected on the tablet is shared with the PHC where the doctor can access it. The blood pressure machine and the tablet are linked through Bluetooth so that readings are directly transferred and there is no chance of data entry error.

But at the core of this effort is the ASHA, who is embedded in the community and, therefore, able to win trust and create awareness. It is also she who follows up on patients, encouraging them to go to the physician and take their medicines regularly.

Making the ASHA effective in identifying and dealing with NCDs is one of the achievements of this effort. The other is helping the PHC doctor deal with such cases. The PHC doctors are oriented to deal with only the most basic of health needs. Getting these doctors to identify NCDs like high blood pressure and sugar and prescribe medication for them requires setting the context with prompting and exposure. Often, medications for NCDs are not stocked in PHCs.

The George Institute’s goal is to promote preventive healthcare through awareness and early detection. Since the ASHA belongs in the community, she is the perfect sentinel and since she connects easily with local people they find it easier to understand the complexities of diabetes and blood pressure through her. Similarly, the PHC doctor deals with the problem before it gets out of hand.

Both blood pressure and diabetes and, at a later stage, cardiovascular ailments place a huge burden on the public healthcare system. They also dent family incomes when the public system is inadequate and private facilities are used. Studies show rising numbers, which means prevention strategies are needed sooner rather than later. In 2000, 118 million people were diagnosed with hypertension and the number could reach 213 million by 2025. CVD accounts for 52 percent of all mortality in both urban and rural India.

These numbers are probably on the low side because sentinel services and documentation are inadequate. It is also clear that diabetes and blood pressure are not only health issues related to the lifestyle of the urban rich, but also of the poor and people in farming communities who could be eating wrong or not doing enough physical labour.

The George Institute was founded in Australia and additionally has offices in India, the UK and China. It conducts healthcare-related research across Asia and Southeast Asia. This is the institute’s 10th year in India.

“We believe in finding solutions which are affordable, scalable and yet high-quality. The objective is to improve access to healthcare and make it affordable for all,” says Amit Khanna, director, finance and operations, at the George Institute’s office in New Delhi.

“We essentially support the public sector, but quality and outcome measures have to be much more carefully defined,” he says.

Often, public-private partnerships work well to achieve these ends as in the example of providing access to dialysis in Andhra Pradesh where a private player, Nephro Plus, has improved services in government hospitals and the George Institute is a knowledge partner in the initiative.

“SMARThealth provides an ecosystem for improving the delivery of quality primary healthcare in communities. It influences three key areas: task shifting, facilitating technology for healthcare providers and use of mobile devices for delivery and quality control,” explains Khanna.

“What is the problem in rural areas? The PHC is geared to cater only to basic diseases, and many of them only to maternal and child health,” says Kannan Krishnaswamy, communications manager. “But evidence shows that NCDs are increasing in rural areas. So, can we use the same set-up that the government has to provide these services?"

“The doctor-patient ratio in rural areas is 1: 20,000. So how do we create a system whereby NCDs get attention and treatment?”

“Another need the project addresses is to create awareness,” adds Krishnaswamy. “People don’t know that they have hypertension and blood sugar. How do we create an environment of health-seeking behaviour?”

“Chronic diseases don’t just happen like infectious diseases,” points out Krishnaswamy. “They build up over a period of time and either they never get treated or it takes years to treat them. We are advocates of preventive care to keep people out of hospital.”

“Our survey in Andhra Pradesh showed that more people were dying of cardiovascular disease than of HIV and road accidents put together,” he says.

The successful use of SMARThealth based on the experience in West Godavari district remains to be seen. But the possibilities are enormous, particularly its use in relation to other diseases and in the integrated management of multiple ailments.