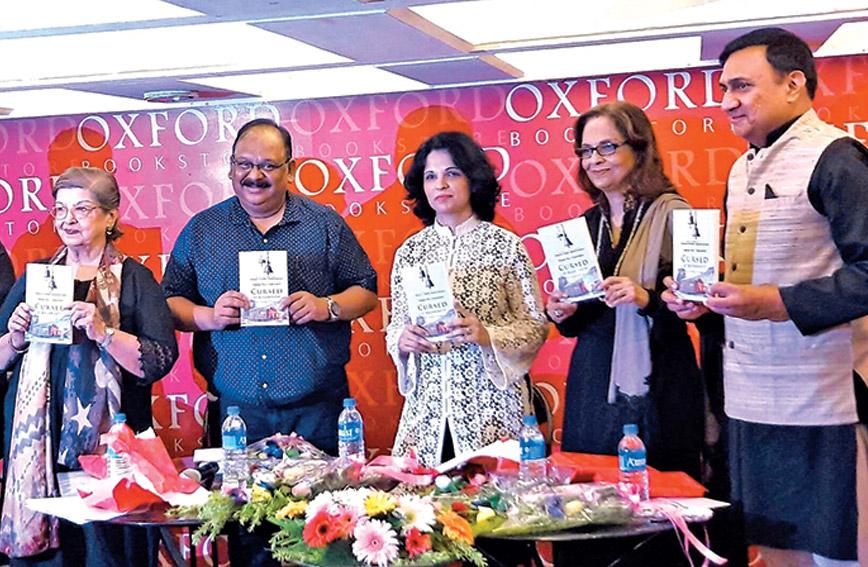 Deepta Roy Chakraverti, third from left, at the launch of her book

The pull of a past life, other reality

In the 21st century the world is often divided between believers and non-believers of one kind or another — be it religion, spirituality, the occult or the divine, there is something for everyone. Often science and the occult clash, but at other times, not.

In the case of the author of Cursed at Kedarnath, Deepta Roy Chakraverti, there is no clash because she is a mathematician, lawyer and a practising Wiccan. How does this come together?

According to Chakraverti, “Law and Wicca have similar traditions of in-depth study and research – the tradition of a senior-junior in law is akin to the teacher-student tradition in Wicca. Mathematics brings with it a certain analytical skill which is also required in psychical research. There is logic and reason in both areas, otherwise every gust of wind becomes a ‘ghost’ and every missed call ‘spirit communication’!”

For the uninitiated, Wicca is a contemporary Pagan movement developed in England during the first half of the 20th century. It draws upon a diverse set of ancient pagan and 20th century hermetic motifs for its theological structure and ritual practices.

Chakraverti grew up in and inherited the Wiccan tradition of her mother, Ipsita Roy Chakraverti, a well-known Wiccan, who in an interview to the Times of India in May 2016, said: “Originally, in the 10th century or thereabouts, we find Wicca to be a worldwide phenomenon. It was embraced in Britain, France, Italy, Japan, India, Egypt and Tibet. Gradually, the power of a witch became a threat to men and organised religion and that’s when the inquisitions, the witch burnings and the badmouthing started. It is interesting to note that the Greek goddess, Diana, a patroness of Wicca, became a ‘Dayan’ in India. The witch was called a ‘khandroma’ in Tibetan Buddhism and she was a deity. In Japan, she was a ‘dakini-ten’ and she was compared to a goddess.”

Cursed at Kedarnath is Chakraverti’s second book in which there are six stories in the first person, about people and places she has encountered. There are instances of men, women and children plagued by past life memories, spirits that hover around and affect their lives, and a visit by the author to the Yogini temple at Hirapur, Odisha.

Chakraverti has been influenced greatly by her mother. She says, “I learned that the two greatest drawbacks in delving into the realm of the unknown are prejudice and apprehension. As a child, I would see extreme reactions to her. On the one hand there would be people queuing up to meet the Beloved Witch, as she was known. There would be women writing in, wanting to be like her, and mothers naming their daughters Ipsita, so that they may grow up to be strong and fearless.”

But it wasn’t always like this. “On the other hand, various lobbies would try to attack her. Men in village panchayats would try to stone her. Wives of Cabinet Ministers in the UPA would tell her that if she weren’t beautiful, she would have been burnt. Ageing CEOs of multinationals would creep into our living room, oily grins on their faces, asking if she could help them get an extension,” says Chakraverti.

In Cursed at Kedarnath each story is followed by a Diary section which highlights the research to substantiate the supernatural happenings with the protagonists in the story. It is in direct contrast to the narrative of the stories, and a bit jarring, but Chakraverti has her reasons.

“The Diary sections give the reality and research of legend, lore and science. I have brought in the very latest global research, on subjects such as out-of-body experiences, life after death, survival of the soul and human consciousness. Universities in the UK, US and Germany are delving into these areas of study, even while in India, we remain steeped in superstition and fear.”

Is the Wiccan tradition relevant in today’s world? And if so, how? Chakraverti believes it’s a tradition which grounds people and dispels the notion that the supernatural is either a gimmick or something bizarre.

“Wicca is a gurukul tradition, which brings back a return to values. Those who are part of the Wiccan Brigade are stronger in themselves, in their psyche, and are better equipped to tackle whatever life brings their way,” she says.

For those interested in the supernatural the stories are fascinating, as is the subject, but need better conceptualisation, writing and editing. There are repetitions and the flow is often interrupted. The Diary section of the book could be better written, to match the flow of the stories. Till then, for a spine-chilling experience you can delve into the book!