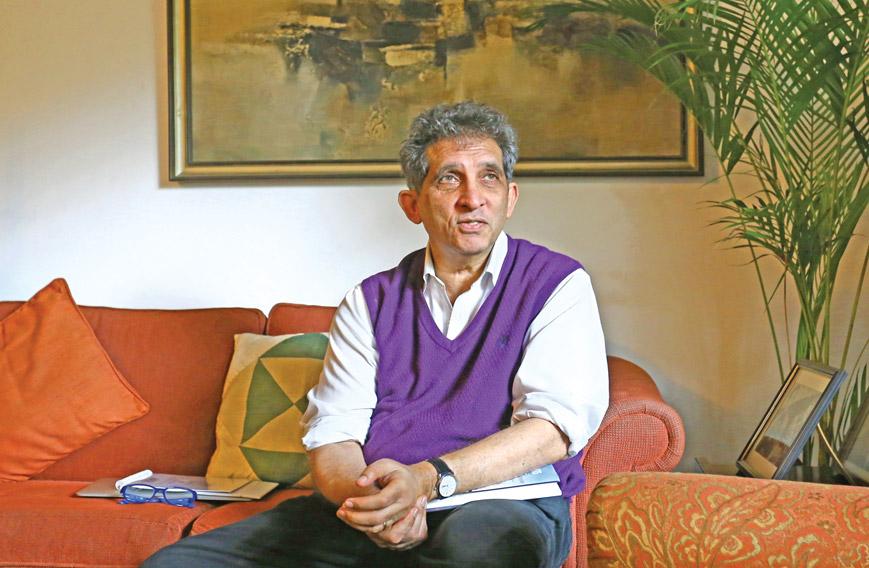 Shyam Bhatia is back for a week at his mother’s house in New Delhi. It is the launch of his book on the many years he has spent at the frontlines of journalism that brings him here. He has been an outstanding foreign correspondent, breaking innumerable stories out of West Asia — often at great personal risk. Bullets and Bylines now tells us Shyam’s  story as he did those stories.

The journalist’s journalist, Bhatia is engaging and easy to talk to. The raconteur in him surfaces quickly. He is not working but he is full of energy and ideas and eager to know more. Our conversation is a lot about Delhi and India and, of course, the state of journalism.

“It is not an easy book to do,” he tells us about Bullets and Bylines. “It is your personal life and you wonder how much you should reveal.” There is also the challenge of being at the centre of things but not projecting oneself as some kind of superhero.

Bhatia’s career, however, has been a very exciting one. How many of us have been kidnapped in Afghanistan by the Mujahidin or hounded out of Iran? His experiences, told in the simple prose of a seasoned reporter, make the book a page-turner.

Every chapter is thrilling. There’s one on how he broke a story on the Egypt-Israeli peace talks and another on his arduous journey to meet the Marsh Arabs. He writes about Benazir Bhutto and how he met Yasser Arafat after being stonewalled. The book is peppered with slippery spies, spooks and seedy dictators.

Reading between the lines is another story of the perils journalists face reporting from war zones. The journalist is just a vulnerable civilian in a tricky situation. Bhatia has, aptly, dedicated his book to his many colleagues who laid down their lives doing their jobs. In southern Sudan, he lost a co-worker when the car they were travelling in went over a landmine.

You have been reporting from the most volatile regions in the world. Why did you choose to be this kind of reporter and that too in the Middle East?

During my graduate research into nuclear proliferation, it became clear that the countries of the Middle East were competing for nuclear supremacy. Combine those emerging ambitions with the oil resources of the region and l suddenly realised how vital the Middle East was for the world at all levels — politics, security and trade. To my mind, it was all under-reported and l wanted to get in and see for myself what was happening. To my then untutored mind, what could happen in the region would have a direct impact on the rest of the world.

You risked your life several times to chase a story. Which story do you believe was most worth it?

Highlighting the plight of the community called the Marsh Arabs who were being systematically bombed by the government of the then Iraqi President, Saddam Hussein. This outwardly simple community had always been a thorn in Saddam’s side, a focus for anti-government activities. So he set about destroying the people and their history by bombing their villages and poisoning and draining the marshes. These marshes have traditionally been considered to be the cradle of civilisation, incorporating ancient Mesopotamia and everything associated with it. Fiercely protective of their way of life, very few outsiders had ever been allowed inside to interact with them. So l am one of a small handful of foreigners ever to have interacted with this vanishing civilisation.

You met a lot of famous people. Looking back, who made the most lasting impression on you and why?

Without doubt, l have to say the Palestinian leader, Yasser Arafat. Until meeting him face-to-face l, like the vast majority of people, assumed he was the ruthless terrorist he was always made out to be. However, nothing could have been further from the truth once l got to know him. He was, in fact, a shy, funny and caring man, l discovered; also, as my book tells you, someone with a passion for honey. l had pretty much unlimited access to him, as long as l carried a large jar of honey with me on every visit to see him.

What is the kind of preparation that could help a correspondent in covering a conflict situation in unknown territory?

Travelling as light as possible, so as to facilitate quick movement. When going to somewhere new, l never could anticipate where, when and how l might have to get around. Two things l always ensured (this dates me of course) was an Olivetti portable typewriter and a short wave radio that allowed me to tune in to the BBC at any time and any place. Today, it would be my laptop that would fulfil the same function as my two essentials, allowing me to keep in touch with the rest of the world. Having said that, it’s always advisable to keep an eye out for other communications channels. Sometimes, if the satellite link fails, it may be the old-fashioned landline telephone that provides the vital link to headquarters.

It may sound a bit of a cliché, but even learning and using a few words of the local language can help in forging local contacts and it is those local contacts who may provide the extra bit of information or new angle that nobody else has.

Is there any support system that could protect correspondents covering conflicts?

In a word, no. However, l would always advise any foreign correspondent/war reporter to make it a priority to interact with friendly diplomatic missions. Diplomats always have good knowledge of the area and local news to share.

The past 20 years have seen a lot of embedded journalism. But you chose to be independent. What difference does it make to stories?

l have always treasured the freedom to go where l want, speak to whomsoever l please and make my own judgement. All this would be impossible as an embedded journalist. As an embedded journalist l would have less choice about where to go and who to see because my ‘minder’ would inevitably be guiding these decisions.

Indian newspapers and TV channels are not known to invest in covering international stories. Do you think Indian audiences are losing out by not having an Indian perspective on global developments?

In a nutshell, yes. India is a major power with vast international interests and Indian public opinion deserves to be kept informed by as many independent home voices as possible. Journalists from other countries will inevitably report from their own respective perspectives. The life and welfare of one Indian in the Gulf is more important and relevant to us than the life and welfare of 100 American, British or French nationals.