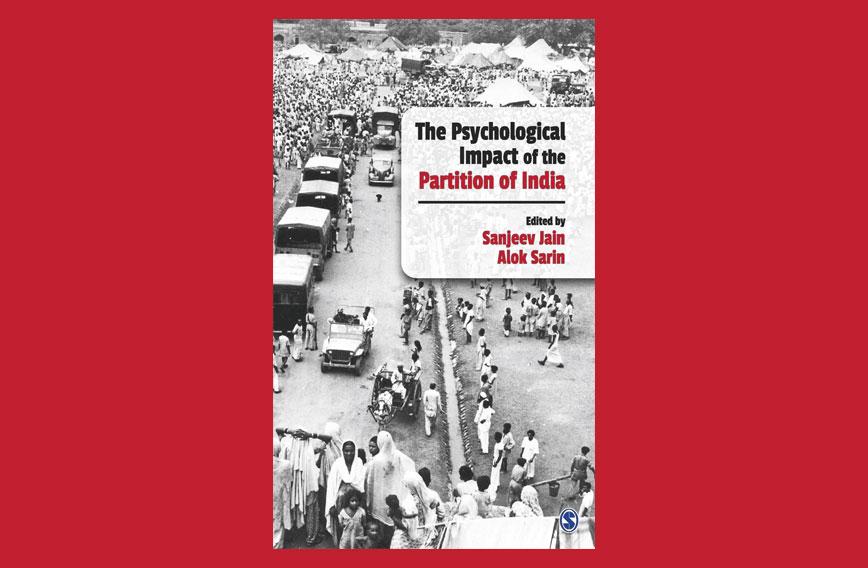 Partition in the mind


The medical discipline of psychiatry in India is going through a phase of introspection and widening its horizons. The Psychological Impact of the Partition of India reflects this change. Edited by Sanjeev Jain, a professor of psychiatry at the National Institute of Mental Health and Neurosciences, and Alok Sarin, clinical psychiatrist at the Sitaram Bhartia Institute of Science and Research, the book consists of research papers that bring together psychiatry, history, literature and sociology to understand this cataclysmic event.

Why is it important to look back at the horrific brutality that marred the birth of India and Pakistan? Psychiatry has so far not looked deeply at the transformations that take place in society and their effect on mental health. Yes, farmer suicides and drug addiction have been studied. But not the Partition of 1947.

This phase was unprecedented in its scale of violence, in the displacement it caused and the simmering anger it left behind. Nearly 5.5 million Hindus and Sikhs and 5.8 million Muslims were displaced and became refugees. They lost their identity and became rootless. More than a million people died.

Reopening this wound is also important because recent scientific research indicates that there is an intergenerational transmission of trauma.

In their opening chapter Jain and Sarin say that the Holocaust in Europe was dissected, and attempts were made to understand the trauma, displacement and prejudice victims faced, so that it would never, ever happen again. This analysis created “humanistic schools of psychotherapy, a greater acceptance of diversity and ensured that medical services developed universal and global principles of practice and ethics”, they write. But in India the aftermath of Partition was followed by stunned silence.

Today when we face a resurgence of identity politics, of the creation of the ‘other’ and a less humane society, “it is perhaps a sign of psychological malfunction”, write the two editors.

Psychiatry was slow to react in those days. The discipline was still at an infant stage. The science of psychiatry in India also followed a different route from the West because of the politics of colonialism and because the ‘native’ mind to Western psychiatrists was seen as ‘different’ and ‘inferior’.

In their paper, “The partitioning of madness”, Anirudh Kala and Alok Sarin trace what happened to people left behind in mental hospitals. They were prisoners in custodial care. Riffling through research at the Nehru Memorial Museum and Library, the authors say Saadat Hasan Manto’s famed story, Toba Tek Singh, isn’t fiction but fact. Mental prisoners were exchanged. They had no choice. Some were suddenly declared ‘fit’ and released. The Punjabis were sent to Amritsar, the rest to Ranchi and many perished, like Toba Tek Singh, in no man’s land. Out of 20 mental hospitals, just three went to West Pakistan.

Sanjeev Jain, in “Balm and Salve”, recounts how health services dissolved into absolute chaos as cholera and infectious diseases, along with communalism, gripped refugee camps.

Moushumi Basu’s paper, “Partitioning of minds and legitimization of differences”, is a sociological study. She sees the Muzaffarpur riots of September 2013 as a sort of replay of Partition violence. Basu makes the pertinent point that Partition isn’t just about territory. Partition begins in the mind with the subtle idea that the other community is different. This thought then seeps into other spaces, negating notions of equality and non-discrimination. It leads to physical symbols of division, like a wall to keep Dalits from grazing land, or ghettoisation. There is an undercurrent of violence to these divisions.

It falls on the State to dissolve imaginary divisions, create togetherness between communities and underline shared interests and spaces.

The role of the State here is dubious, writes Basu. She looks at State intervention in Darfur, Yugoslavia, immigration in Europe and the Maoist insurgency in India. The sinister use of psychiatrists by the State is routine. She cites the example of two psychiatrists who became the main ideologues of Serbian nationalism and built up mass hysteria. Other examples are narco analysis, brain mapping, the CIA’s mental torture methods, drawing up ‘profiles’ of terror suspects and so on.

Hina Nandrajog in “Refugees of the Partition of India” explores how refugees coped with trauma and loss of identity through the prism of Partition literature. Strategies they used, she writes, included silence, victimhood, martyrdom, nostalgia, retaliatory violence and romanticism. Chaman Nahal’s Azadi, Intezar Husain’s Basti, Yashpal’s Jhoota Sach, Joginder Paul’s Sleepwalkers, Khushwant Singh’s Train to Pakistan as well as Bhisham Sahni and Bapsi Sidhwa together provide a chilling portrait – of the hazardous journey refugees undertook, their utter bewilderment, the lack of any State support, discrimination, the long wait for a home, how family ties ruptured and how the character of cities changed.

It was girls and women who were the victims of the most gruesome and bestial acts during Partition. Ayesha Kidwai in her chapter, “Are we women not citizens?”, investigates the role of Mridula Sarabhai and Inis Kidwai along with social workers in the recovery of women who were abducted during this period. They were ill-prepared for a task that required immense support from State agencies, mental health specialists and from all sections of society.

Women were kidnapped, raped and kept as slaves not only by ordinary and angry Hindus and Muslims but by high-ranking officers and the police. Patriarchy suffused all State agencies and even the justice system.

The traumatised women didn’t want to return — they feared they would not be accepted by their families. Neither Sarabhai nor her team had the skills to put them at ease or counsel them. Sarabhai said honestly that the women were  “not in the right frame of mind and the wishes of the women should not be given undue weight. Their statements are false.” The few who were reassured that their families would accept them wanted to go home straightaway. Kidwai defends Sarabhai’s role, which has been criticised by feminists. She writes that Sarabhai and Inis, in fact, cast the first stone against the patriarchal State.

The other research papers are also analytical and telling. Sukashi Kamra writes on the language of violence used during the Partition period. A chapter by Anjana Sharma and Gopa Sabharwal on Mahatma Gandhi traces his life, the grief he felt during those days and his plea for a return to sanity. The word ‘madness’ occurs over and over again to describe the terrible months of Partition when India went berserk.