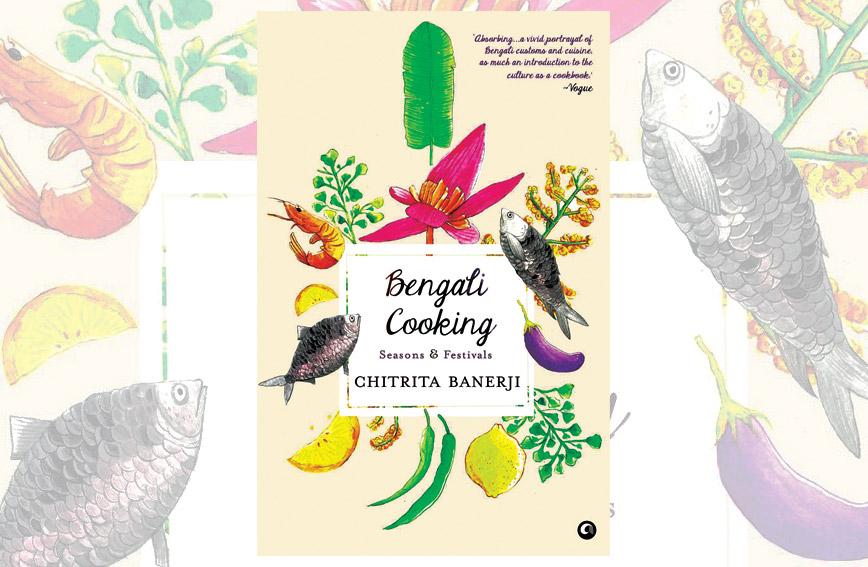 If you have not been to the two Bengals (east and west), one in India and the other in Bangladesh, Chitrita Banerji’s Bengali Cooking is a delight. If you have, the book is still a delight.

Having lived the first 20 years of my life in West Bengal, mostly in rural areas, the book takes me back to places that seem to have fallen into the deep recesses of my mind. It is, unusually, divided in chapters woven around seasons, festivals that fall during the seasons, and the food prepared during those times.

Ours was not a Bengali household. My parents came from Punjab and our cook, Shankar, was from Odisha. My father worked for a British coal mining company. So, the home kitchen was a khichri of sorts — Punjabi, Bengali and English recipes dominated the table from paranthas, rajma-chawal, rotis, chicken and meat curries to fish curry Bengali-style and meat roast with potatoes, bread pudding and caramel custard. Our fare was rich.

Banerji has a good understanding of Bengali cuisine, being a Bengali herself, living in Bangladesh for several years, and then moving to the US. She is a gifted writer. Her descriptions of the food, the seasons, the rituals and history, all come together in mouthwatering ways.

The Bengali calendar is a solar one, Banerji writes, and is based on six seasons: Grishma or summer; Barsha or monsoon; Sharat and Hemanta or early and late autumn; Sheet or winter and Basanta or spring. As to be expected, Barsha is the most important season as the rains “infuse the parched earth with new life and wash away the dust and grime of previous months”.

No discussion of Bengali cuisine is complete without the mention of rice and fish. “The dual entity of rice-fish which is at the heart of Bengali cuisine is reflected in a thousand and one ways in the rituals and ceremonies of Bengali Hindus,” writes Banerji. Added to this are the numerous preparations of potatoes, brinjal and many varieties of spinach and other greens.

Banerji describes a typical Bengali meal, eaten in courses. The traditional way was to eat on the floor which was covered with a mat or carpet, off banana leaves, washed and glistening. In the centre of the leaf was placed a mound of rice, “flanked by vegetable fritters, wedges of lime, whole green chilies and a bit of pickle. And, in the centre of the mound of rice, a little hole to pour in a spoonful of ghee or clarified butter to flavour the initial mouthfuls of rice”.

The order in which Bengali food is eaten is essential. Each dish is eaten separately, with a bit of rice. The bitter is eaten first, with a handful of rice and the vegetable mixture known as sukhto. This is followed by dal, with fritters of vegetables or fish, after which come other fish dishes with gravy and then, meat preparations. Chutneys and ambals are last, before the sweets. No self-respecting Bengali would not offer or partake of a sweet — sandesh, chamam, pantua, roshogolla, and so on, which then signifies the meal has ended.

Banerji also touches on the many aspects of Bengali life, urban and rural, in all its richness. The importance of adda, or hanging out in tea shops; the great love Bengalis have for hilsa fish; the numerous preparations of sweets with the base of chhana, or split milk; the extensive use of posto or poppy seeds and mustard oil; the different varieties of rice to be used for various occasions and so on.

She acknowledges the Muslim influence as seen in the parothas, kebabs, pulaos and biryanis which are part of Bengali cuisine as well as the impact of the British Raj. Many dishes and words such as chop and cutlet are now part of Bengali vocabulary.

What the Bengali eats today, Banerji says, depends on their means and preference. For the very poor, it has always been a struggle to get basic rice. Many poor peasants in Bangladesh survive on a handful of rice, some onion and green chillies and, if possible, some potato or green vegetable.

The notes in the book describe the meaning of Bengali terms used. The section on common ways of cooking Bengali food describes the various dishes, in a non-recipe way. Two pages of possible menus are extremely helpful. When I lived in the US in the 1970s and ’80s my American friends would often complain about Indian cookbooks, which wouldn’t say what goes with what or how you could prepare a complete Indian meal. Clearly, Banerji’s experience of living in the US has helped her understand this need.