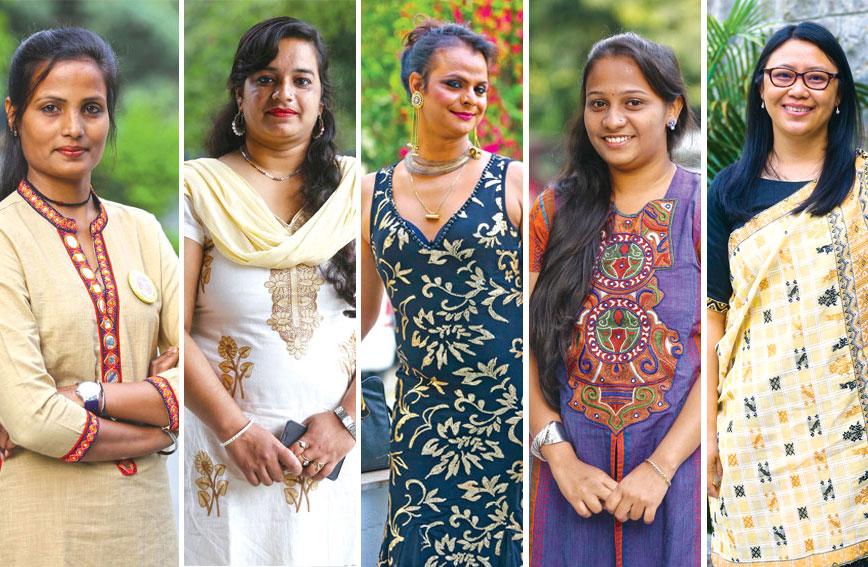 The many stories of Saahas from all over India

Annu Kumari was just three years old when she was married off by her family. The daughter of a Dalit vegetable seller, she is from Kishangarh in Ajmer district of Rajasthan. When Annu grew up, she joined the Mahila Jan Adhikar Samiti and, with great perseverance, got her marriage declared null and void. She went to college and now has master’s degrees in history and English as well as a B.Ed. Annu wants to become a teacher. “My battle against child marriage was a small one. I faced so much pressure to get married but I feel education and relationships are much more important,” says Annu, who now fights for Dalit girls’ right to education.

Annu was one of seven individuals to be honoured with the Saahas Awards by Women in Security, Conflict Management and Peace (WISCOMP). Founded in 1999, WISCOMP is an initiative of the Foundation for Universal Responsibility of His Holiness the Dalai Lama (FURHHDL).

“The awards recognise people from different parts of India who work quietly and tenaciously to counter gender-based violence, reclaim agency and become change agents,” says Dr Meenakshi Gopinath, a political scientist and former principal of Lady Shri Ram College. The think tank works to build a culture of co-existence and non-violence from a gender perspective.

“WISCOMP is an important part of His Holiness’ commitment to work with young people, empower women and nurture gender justice,” says Rajiv Mehrotra, trustee and secretary of the foundation.

Deepa from Dehradun was another awardee. A survivor of domestic violence, she now lives independently with her two children. She helps other women survivors of domestic violence. She is also part of Appropriate Technologies, an NGO that works for women’s right to livelihood in the hilly regions of Uttarakhand.

Sonia Khatri from Panipat in Haryana was honoured for her fight against sexual harassment. “I had to listen to all kinds of lewd, unmentionable jokes and conversations among my superiors when I worked with a child rights organisation,” she says. Khatri persisted with her case and had to face ostracism from the community — they labelled her a sex worker for going out to work. “At one stage I thought I would either commit suicide or accept defeat,” she says. Today, as a programme officer with the Participatory Research Institute of Asia, she combats sexual harassment at the workplace and all forms of violence against women and children.

Priyanka Gaikwad, 21, a college student, was also awarded. Her mission is to fight for girls’ access to public spaces and playgrounds in Mumbai chawls. Gaikwad says she learnt the meaning of true empowerment when she attended life skills workshops run by Naaz Foundation and became a community sports coach. She now works with Akshara Foundation and continues her campaign to reclaim open spaces. “Girls have the same rights as boys,” says the vocal Gaikwad.

“This is the first time a transgender is receiving such a prestigious award,” says a smiling Dr Santosh Kumar Giri, founder and director-secretary of Kolkata Rista, an NGO that works with the transgender community in four states. Giri also works with Men Engage, a global network, to create gender awareness. Giri, who is from Kolkata, has faced brutal violence, harassment and gender- based discrimination.

Sunita, another awardee, is from Delhi. A survivor of domestic violence, she went on to work as a commercial taxi driver in Delhi. She is bringing up and educating three girls. 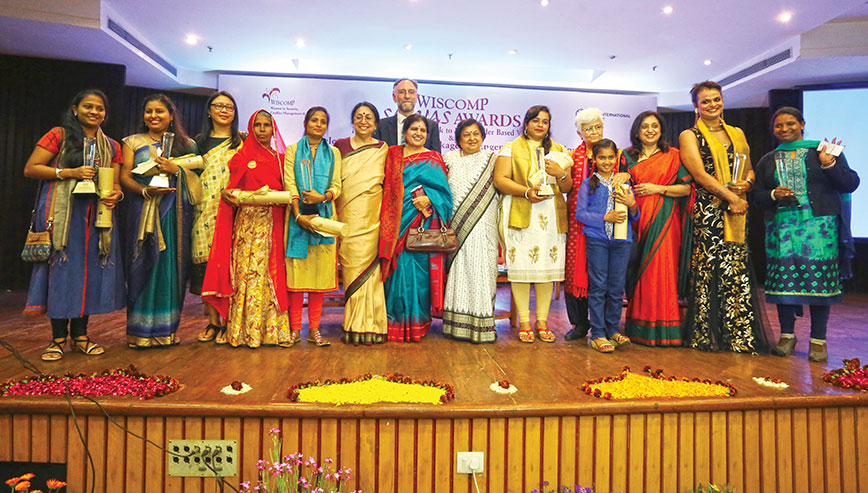 The awards also recognise men who work to end violence against women. Dhanraj Nandpatel from Yavatmal in Maharashtra was honoured. A social worker, the focus of his work is child health and nutrition. He reaches out across caste-based fault lines to end gender-based violence, child sexual abuse and stigmatisation of violence survivors.

There were also people who received special mention at the awards ceremony. Seema Terangpi and Aarti Meghwal are from the Northeast. Terangpi has faced a lot of discrimination in Delhi but continues to be a dedicated social worker. She works mostly with her mother’s NGO, Bread for Life. Based in the Karbi area of Assam, the NGO runs livelihood projects for women. Terangpi also fights for the rights of trafficked girls, sex workers and victims of domestic violence. “I believe that there will be peace and understanding in India one day and we will accept one another for what we are,” says the spunky young woman.

Meghwal from Loha Gunj, Ajmer district, Rajasthan, faced the prospect of marriage when
she was just 14. She now works with the village Bal Samuh-Khushi on local issues and fights
against child marriage. Her resolve is further strengthened by her association with the Mahila Jan Adhikar Samiti.

At the event, WISCOMP released its innovative training and curriculum manual that advocates gender equality. A film profiling four individuals who have countered gender-based violence was screened. Also, the Shero of Courage Award was given to feminist activist Kamla Bhasin for her relentless advocacy of gender equality and social justice.

The Saahas Awards are part of WISCOMP’S “Partners in Well Being: Youth Countering Violence Against Women” initiative which concluded recently. The project focused on Delhi and the National Capital Region and was supported by the Public Affairs Section of the US Embassy in New Delhi.

Launched in October 2014, Partners in Well Being called for people to act against gender-based violence. It also aimed at changing gender stereotypes, attitudes and behaviour towards women that result in violence against women in India through training, seminars, capacity-building workshops, film screenings, policy consultations and performances.

“We got people from Sawda Ghera on the outskirts of Delhi to talk about their experience of displacement and how it impacts women. Simple things like accessing toilets. They become sites of violence against women. It is not just the violence of exclusion. To be uprooted from the centre of Delhi increases the propensity for alienation and violence among young people,” says Gopinath.

WISCOMP has emerged as a pioneer in enabling women to play a greater role in security and peace in South Asia. “The idea is to look at South Asia as a vibrant space for both women’s assertion and conflict resolution because we are such a conflicted region both within countries and relationships between neighbours,” says Gopinath.

A large part of WISCOMP’s work focuses on educating people for peace, conflict transformation and building on its research base of 300 publications. Talking about WISCOMP’s Educating for Peace initiative, Seema Kakran, deputy director, says, “We work with schools, colleges, universities to explore how teachers, teacher-educators and young people can look at conflict as opportunities for building a more just, inclusive society and not just shun conflict. We also build curriculum so that teachers can introduce young people to ideas of non-violence and peace.”

WISCOMP’s flagship Conflict Transformation Programme has brought together 400 youth leaders, largely from India and Pakistan, for dialogue and training in peace-building over 2001-12.

“It was amazing what we achieved. Our learning was that individual attitudes and beliefs have to change. It is only when transformation comes at very personal levels, such as cultivating skills like empathy, listening to the other, recognising your prejudices, suspending judgement, that you are able to impact policy and influence public discourse,” says Sewak.

In all its work, WISCOMP steers clear of stereotypes about building peace.“We don’t take an essentialist position that men make war and women make peace because women can also be perpetrators of violence. Our view is that women bring cohesive elements into their communities, while their informal networks give them information about conflicts that may skip the radar of intelligence agencies and security forces. They bring different skills to the table and these skills need to be optimally utilised. You are that much poorer for leaving out half the population in solutions to conflict,” says Gopinath. 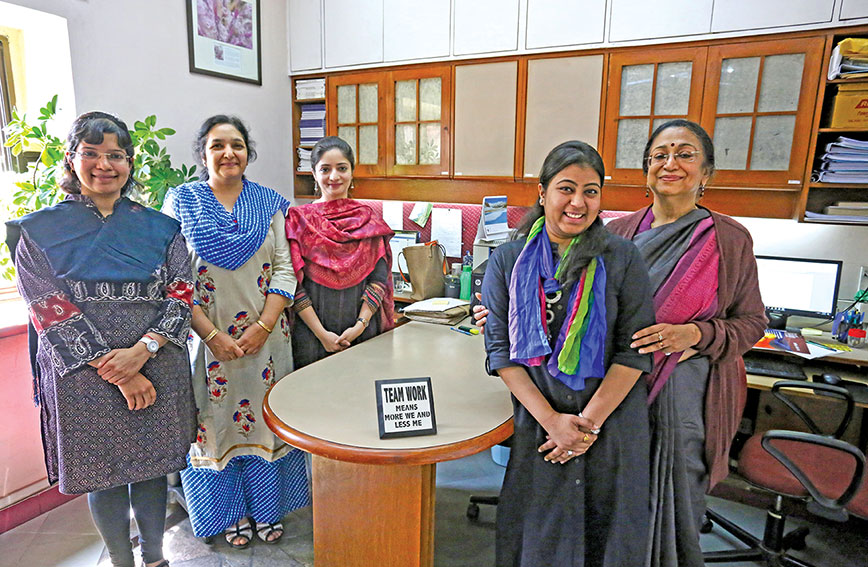