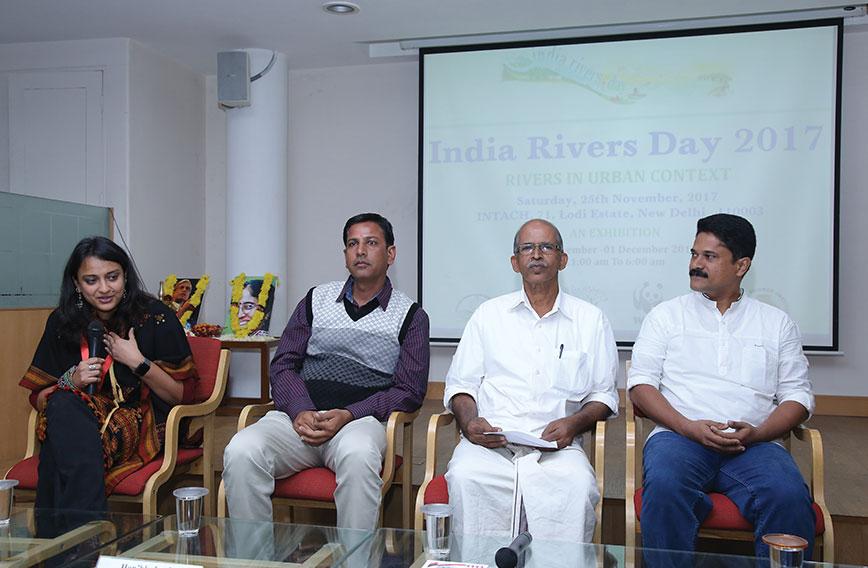 The fourth Bhagirath Prayas Samman (BPS) awards in 2017 and the inaugural Anupam Mishra Medal for exemplary media work on rivers were announced in a packed hall at INTACH on 25 November, India Rivers Day, and given away by Supreme Court judge Justice Madan Lokur.

The Meenachil Nadee Samrakshana Samithi of Kerala received the award in the organisation category, and Mahavir Singh Sukarlai of Rajasthan in the individual category. Arati Rao, an environmental photographer and writer, was the first recipient of the Anupam Mishra Medal.

For nearly 30 years the Meenachil Nadee Samrakshana Samithi has been faithfully protecting and restoring the ecology of the Meenachil river which feeds the Vembanad lake — a Ramsar site in Kerala.

In 1989-90, a group of eco-sensitive youngsters came together and prevented an ecologically unviable dam from being built on the Meenachil river in Teekoy gram panchayat in Kottayam district of Kerala. The movement against the dam transmuted into the Meenachil Nadee Samrakshana Samithi which decided to rejuvenate the river. The Samithi adopted a basin perspective and involved all stakeholders to tackle the grave threats the river was facing — catchment area degradation, water diversions, urban pollution, encroachment and sand mining.

In 1995, the Samithi launched a check dam campaign and reached out to gram panchayats, zilla panchayats, the Department of Local Self Governance, college students and other communities. A large number of check dams was constructed in Eattupetayar, Poonjar and Teekoyar — key tributaries of the Meenachil river. This led to recharging of aquifers and thereby improved the hydrology of the river.

In 2014-15, to tackle encroachments, urban pollution and sand mining, the Samithi stepped up its work and launched yet another innovative idea. It organised local vigil groups called kavalmadams comprising local stakeholders who met regularly and discussed the prevailing condition of the river, the action needed and the action taken.

The Samithi’s green education programme, embedded in local culture, and its innovative campaigns like ‘Give our Meenachil Back’ and ‘We can bring our Meenachil back to life’ captured the imagination of young people living alongside the river. It succeeded in inspiring them to participate. The Samithi expanded kavalmadams to include college and school students and got them involved in catchment restoration by planting trees and creating awareness.

In 2017, the work of the Meenachil Nadee Samrakshana Samithi inspired a People’s Unity (Janakeeya Kootayma) campaign to re-establish the hydrological and ecological links of the Meenathra and Koddor rivers, two tributaries of the Meenachil, by removing encroachments and accumulated silt. Several organisations, the government and the green fraternity came together to remove blockages in the tributaries, free up encroachments and bring back paddy cultivation to improve water security and restore the basin’s ecology.

The Samithi’s work is an exemplary example of campaigning combined with education and local action. It got everybody involved and did not rely on any external funding. So, there was a strong sense of local ownership and collaboration to achieve scale and make an impact. 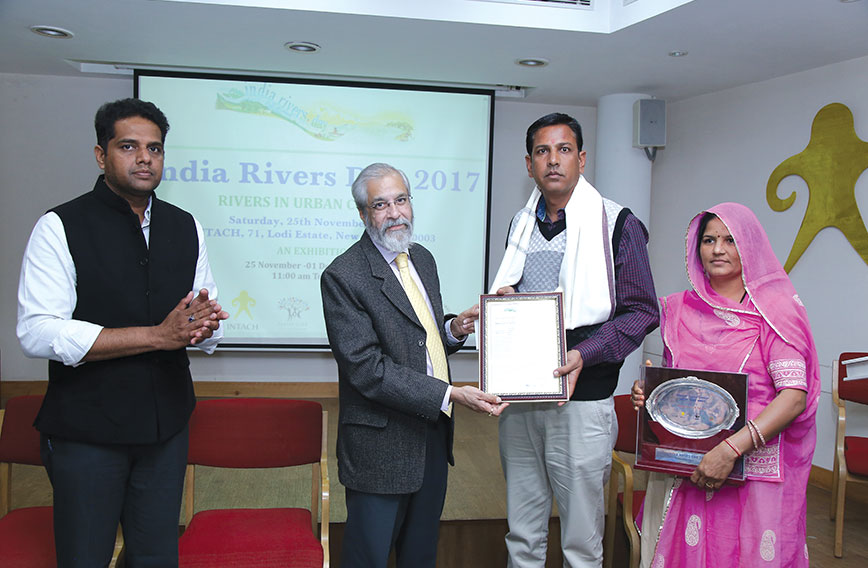 Mahavir Singh Sukarlai has valiantly and untiringly, through campaigns, advocacy and litigation, reduced industrial effluents in the Bandi — a seasonal tributary of the Luni river in Rajasthan.

Forty years of unabated pollution from textile dyeing and printing industries in Pali in Rajasthan left the Bandi a toxic mess. Ordinary effluent treatment plants did not make much of a difference since the volume of effluents generated was far higher than the plants could handle. A cocktail of untreated, treated and partially treated wastewater accumulated in the Nehda dam on the Bandi,  constructed for irrigation purposes. Instead, the dam’s waters contaminated aquifers.

Alarmed at the huge ecological and health impact of the contaminated river, Sukarlai — then a fresh graduate — took up the cause of freeing Bandi from pollution. In 2004 he founded the Sri Kisan Paryavaran Sangharsh Samiti, a community-based organisation, and sensitised and mobilised farmers living downstream to demand their right to a clean river.

Despite innumerable petitions and meetings with industries as well as district and state authorities, the Bandi got no relief from pollution. In February 2008, protesting against the administration’s short-term and piecemeal approach, Sukarlai mobilised thousands of farmers. They agitated for 20 days on the banks of the Bandi and succeeded in attracting the attention of the District Collector, who ordered rotational operation of the industries to meet the capacity of the effluent treatment plants.

But that too did not make much difference. Business as usual continued. Finally, Sukarlai, through the Sri Kisan Paryavaran Sangharsh Samiti filed a PIL in the High Court of Rajasthan in 2012 demanding long-term solutions including zero discharge of effluents into the river and compensation for the loss of ecology and wellbeing of farmers due to pollution. The case was transferred to the National Green Tribunal (NGT) in 2014.

Sukarlai’s legal intervention led to the closure of 200 units operating in the non-industrial areas of Pali. This, along with various directives of the High Court, ensured that the volume of effluents generated came down from 34 million litres a day to 12 million litres. In 2016, all 500 industrial units were closed for 10 months by the NGT order and, perhaps for the first time in decades, farmers received uncontaminated water from the Nehda dam for irrigation.

For 13 long years Sukarlai has worked dedicatedly against pollution. He combined campaigns with advocacy and litigation to help reduce the effluent load on the river and thereby arrest the trajectory of pollution.

Arati Rao has been writing a series of vivid reports, with evocative photographs and other art work, on the impact of ecological degradation and climate change on ecosystems and livelihoods along South Asian rivers. Her focus has been mostly on the Ganga and Brahmaputra basin, documenting the changes that developmental activities have brought to the region. She has written extensively on diverse issues related to freshwater degradation, while traversing the major river systems of India. A landmark project of hers has been River Diaries, which include narratives on the exploration of ecosystems and communities around rivers.

A sordid story in pictures 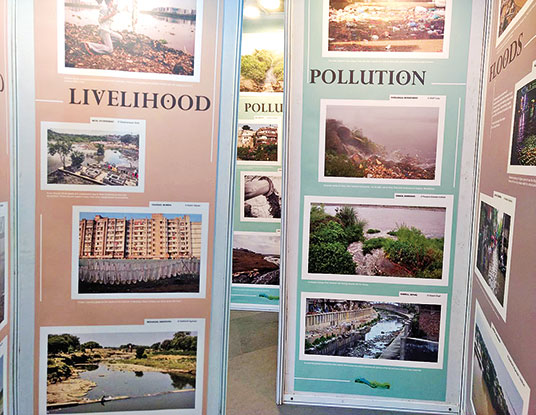 The plight of India’s urban rivers was emotively displayed at an exhibition held at INTACH to celebrate India Rivers Week. The exhibition depicted the unassuming role rivers play in the lives of citizens and the slow death they are facing.

The display was divided into segments:  livelihood, religion and rituals, mining, pollution, floods and tourism. Panels with eye-catching pictures and captions related sad stories of India’s rivers. Mighty rivers are reduced to streams and drains due to human intervention. Rivers are dammed, their catchments degraded, and their sandy shores mined mercilessly. Once a river enters the city, it is inundated with filth.

Installations underlined the importance of rivers in people’s lives. The Ganga and Narmada are revered. Rivers are used for transport and recreation.There were some evocative photographs by Arati Rao of the Brahmaputra in Assam.

Despite pollution, people use rivers for bathing and washing. A child poses for a picture in front of Mumbai’s dank Mithi river. Lines of clothes washed with filthy water become a rainbow of colours against crumbling tenements. Pictures showed mountains of trash sailing in the Jhelum and Assi rivers and textile units dumping colour into the Bandi river in Pali town. Sludge from manholes in Varanasi flowed like black filth into the Ganga. Most cremations take place along the Ganga but there is no ash disposal system.

Another picture, by Manu Bhatnagar, revealed labourers blatantly extracting sand from the Ganga near Patna as officials passed. The Nambul river flows into Imphal in a near pristine state and then turns into a drain full of trash. There were telling pictures about the devastating floods which hit Srinagar and Chennai. A picture by Siddharth Agarwal of the Hooghly depicted the chaos on its banks.

Neither are flood plains preserved. So a car park is built on one river, there is rampant encroachment on another and in Nagpur a crematorium is built. And yet rivers are still sites for biodiversity, whether it is the Gangetic dolphin or seagulls. Goa is perhaps the only state where mangroves still line the river Mandovi.

The exhibition was educative and will inspire young people to work for the welfare of rivers.