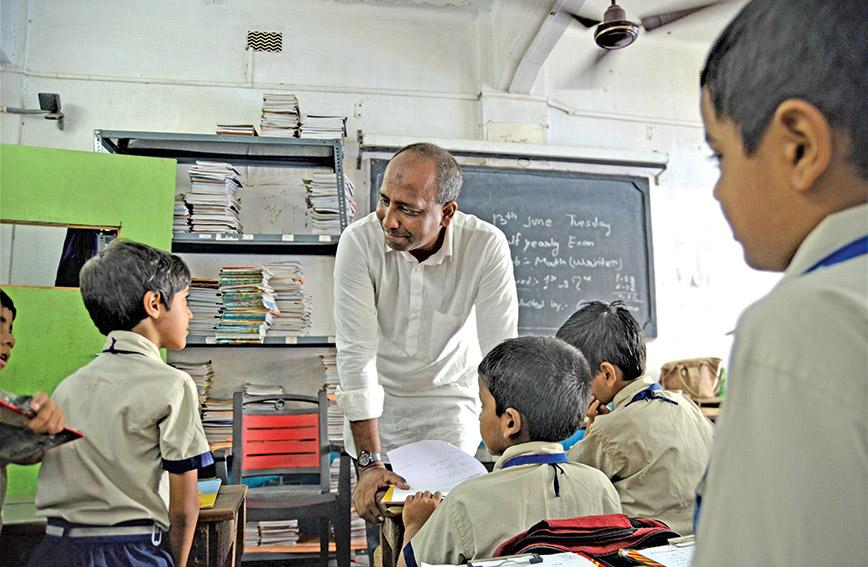 Mamoon Akhtar with students at the Samaritan Mission School in Tikiapara

Innumerable NGOs are helping the needy across the country in different ways. What makes the Samaritan Help Mission in Howrah, which adjoins Kolkata across the Ganga, exceptional is the way in which people of different faiths, nationalities, private initiative, official assistance and corporate help have combined to nurture a vibrant island of hope.

The Samaritan Mission does its work in Tikiapara, a huge slum that runs alongside the railway tracks connecting Howrah Station. It is 80 percent Muslim, poor and intimidated by crime. The mission was founded and is led by Mamoon Akhtar, 46, its secretary, and most of its work is housed on land belonging to the Belilious Trust.

Mamoon’s (everybody calls him so) father was a skilled worker and keen that his son get a good education. So he put Mamoon in one of the area's leading schools, St Thomas. But he had to leave after reaching Class 7 under humiliating circumstances because his father was out of a job and could not pay the school fees. Mamoon finished high school through open learning and, with his father departed, supported his family by doing odd jobs and offering private tuition. Not being able to complete his formal schooling, enabling others to do so and in the English medium became the driving passion of his life.

Two incidents shaped him. One day, he found a man beating up a woman because she refused to be a drug pusher. Mamoon tried to stop him and got beaten up himself. He was finally rescued by other locals who knew him and called him “Sir” because he taught children. The little boy whose mother Mamoon had tried to save caught up with him and simply said, “I want to study.” He asked the child to come to his house and soon he was running evening classes for 20 children in a spare room. To keep doing so, Mamoon went around the community seeking help and enlisted the services of local girls who had completed school as teachers at `100 per month.

Then, one day, he spotted a newspaper clipping which pictured a lady singing with a group of children. She was Lee Alison Sibley, Jewish wife of someone with the US consulate in Kolkata. Mamoon wrote to her, seeking help; she replied that he should ask the local community. Mamoon wrote again. Eventually, she came, saw what he was delivering from a single windowless room, was overwhelmed, wrote out a cheque for `10,000 and asked a local journalist friend to write about his work. It highlighted the fact that Mamoon taught children from all communities. The article roped in Ramesh Kacholia of Caring Friends Mumbai. Ramesh Uncle thereafter became a permanent mentor.

With what Mrs Sibley gave, Mamoon set up Samaritan Help Mission in 2001, the name inspired by the biblical story he had learnt in school. When Mamoon canvassed for additional help from the community around him he also reaped a bonus — a strong community connect. In 2007 the informal school became the Samaritan Mission School, accredited and recognised by the West Bengal government. Today it is a co-educational English-medium school, affiliated to the state board for secondary education, with an enrolment of 1,300. The big thing is ‘English medium’; Mamoon knows the difference that makes.

Now switch to I.R. Belilious Institution on Belilious Road, covering two acres of land bequeathed by a Jewish couple, Rebecca and Isaac Raphael Belilious (they both departed by 1910, childless), with a football field, basketball court, a water body, a two-storied school building and a bigger one coming up which will take classes up to Class 8. The whole complex comes under the Belilious Trust Estate. As a child Mamoon swam there, to later see the water body turned into a municipal garbage dump, the government school virtually defunct, the whole space gone derelict and a den of drug pushers.

In 2014 Mamoon and a small group of friends started canvassing the residents of Tikiapara and eventually, on 14 November, Children’s Day, a meeting of a thousand people was held at I.R. Belilious Institution. Also present were the trustees of the institution, the local MLA and the Howrah police commissioner, Ajay Mukund Ranade. The meeting decided to revive the institution, after some debate of course as to why a madrassa should not be started instead of an English-medium school. But Mamoon prevailed and from the next day began the physical clean-up job by the locals through shramdaan with help from the municipality. The police did their own kind of clean-up. In December the trustees and the police commissioner decided to start an English-medium school, also open an evening school, name the effort the Rebecca Belilious English Institution, and hand over its management to the Samaritan Mission.

As you enter, to the left is a prominent sign indicating it is a banking kiosk of the State Bank of India. The place is filled with women, 7,500 of whom from the adjoining slum have accounts there. A biometric point of sale device enables cash dispensation for those who have Aadhaar registration. Along with education, financial inclusion is also taking place right there. The Samaritan Mission also works as a banking correspondent of Indian Overseas Bank.

Right after the bank outreach is the Rebecca Belilious Charitable Dispensary which treats over 200,000 outpatients a year with help from Howrah government hospital doctors. In it there are well-equipped rooms for ophthalmology, dentistry, cardiac care, gynaecology and general medicine. Why is the place not teeming with people and why is it a bit dark? The reality of non-metropolitan India catches up. There is a power cut on.

All the facilities and construction are fairly new and don’t seem heavily used. The grants are coming but how accessible is the entire facility? The question is answered when I spot in another corner a door marked Jan Aushadhi, an initiative by the Indian government to make available cheap essential generic drugs to all. Inside, the shelves are stacked with medicines and two staffers busily fill prescriptions. All the elements that make up a complete out patient facility are present. Too few people overall? It is a hot midday during Ramzan fasting.

In another corner of the complex is a narrow hall with two rows of sewing and embroidery machines with girls working on them. An instructor is explaining to one of the girls how to work on what looks like a pocket which has to be fixed onto the garment. This is the vocational training centre.

Another doorway bears a key message, a skill development centre facilitated by two police commissioners, Ranade and D.P. Singh. It captures the active and supportive role that the local police played in the work of the Mission.

Next to it is being built a drinking water plant which will use the reverse osmosis process and ration daily entitlements through smart cards. No service is rendered free, explains Mamoon. A token fee is levied to make people realise the value of what they are getting.

After these facilities there is a clean water body (it has been snatched back from extinction) and beyond it is an astro turf football pitch, enabled by the CSR programme of Chevrolet GM. At a second campus 10 km away in Bankra, Ambuja Cement helps run a vocational training centre and the Tata Trust a centre to facilitate the integrated use of technology in education to revive government schools.

You realise CSR funding helps but it is an additionality. The Mission’s lifeblood comes from its community ownership, aided by faceless philanthropy, all explained to you by a balding, energetic Mamoon, despite undergoing Ramzan fasting, who is fluent in English and Bengali but prefers Hindi if you have it too.

As my tour ends Mamoon makes a critical point. At one stage an Islamic organisation was ready to help but wanted the project to have an Islamic character. Mamoon declined. He says his Mission knows no creed and he is trying to bring about active give-and-take between the two main communities in Tikiapara which live peacefully but separately, a bit aloof from each other. Twenty percent of the slum-dwellers are Hindus but they make up 30 percent of the students of the Mission. That additional 10 percent is a badge that Mamoon can wear with pride.