Dog partner? Find one from 30 a month at Friendicoes

At the Friendicoes shelter in Defence Colony, one abandoned dog shows up every day. That’s 30 dogs a month. On average, five dogs get adopted every month. “We still have a surplus of 25 dogs,” says Tandrali Kuli who heads the adoption programme at Friendicoes.

The number of abandoned dogs has gone up sharply in the past few years. When Kuli started volunteering in 2003, one or two dogs would turn up in a month.

“We have 150 dogs ready to be rehomed. Another 150 dogs can be adopted by homes who are ready to go the extra mile to train their dog, socialise their dog and so on.”

Sick dogs stay in the shelter for treatment. The rest go to adoption centres. Healthy dogs, waiting to join the adoption programme, stay at the Friendicoes sanctuary in Gurugram.

People mostly want a small dog, a puppy or up to six months old, and cute-looking. But dogs do not come readymade like that, says Kuli. It is the desi dogs and the older dogs who have a hard time finding homes.

At the adoption centre in Chittaranjan Park, there is a four-year-old desi dog who is blind. Tuffy, a cocker spaniel, is 10 years old. Sam is a young golden retriever with a chronic skin infection. The centre has a mix of dogs, young and old, small and big, desi and pedigreed.

Friendicoes has three adoption centres — one in Chittaranjan Park and two in Noida. Each adoption centre cannot house more than 12 to 15 dogs. All are sterilised.

“The adoption programme has become more streamlined. We’ve learnt from our mistakes over time,” Kuli recalls. It could take years for a dog to find a home and sometimes just a few weeks.

Chances of a healthy pedigreed dog finding a home are almost 100 percent. But if a dog has an illness, it is first treated in the Defence Colony hospital and then sent to the adoption centre.

“You cannot give away a dog without understanding its temperament. You may fail but you must try,” says Kuli.  A dog is observed for at least two to three weeks before it is put up for adoption. Kuli has 11 dogs of her own and knows a thing or two about temperaments. Her own Rottweiler is a friendly dog but he can’t stand the heat and if he’s out too long, he becomes irritable and snappy. 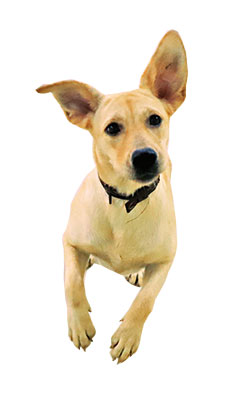 “What is most important is the right match,” says Kuli. “If there are old people in the home, a young and hyper Labrador is not the best fit. A joint family is not suitable for an anti-social dog. Someone who works eight to 10 hours a day cannot look after a German Shepherd who needs plenty of exercise.”

Interested families or individuals have to fill out a questionnaire and answer questions about what kind of dog they want. If there is a suitable dog, Sharma conducts a home visit to meet the entire family and ensure that everyone is on board. Many times, the house visit is unsuccessful. If the family already owns a dog, the house visit is also an opportunity to observe how well that dog is looked after.

In some cases, the size of the house also matters. A Saint Bernard cannot live in a two-bedroom house. It needs more space. “Of course commitment is important, but you have to be practical about what you’re taking on,” says Kuli.

Kuli and Sharma counsel families before and after adoption. They discuss what the dog will eat, how much exercise the dog might need, who will be their vet and how they can condition the dog to be alone. If families who have adopted dogs from them are moving cities or countries, they also help them find the right travel options for their dogs.

At the Friendicoes shelter, the dogs are fed bread and milk in the morning, and chicken and rice in the evening. They look for families which can feed their dogs a nutritious diet.

Older dogs with medical problems and behaviour issues have few takers. But some people are truly dedicated. A moody and unpredictable pitbull at Friendicoes was put into a training facility. The family that adopted him would go there once a week to be present for his training before they finally took him home.

Very rarely do adoptions fail, probably one or two out of a hundred. A young desi was adopted by three girls who were living together. They  struggled with training the dog to be alone. Unable to look after her, they gave her back. The dog has now been adopted by a loving family. “My aim is to not just rehome the dog, but to successfully rehome the dog. There is a difference,” says Kuli.

About seven years ago, two desi pups, a brother and sister, were left outside Kuli’s home. The male found a home easily, but the female, Melody, was shy and introverted. “People take the dog who comes to them wagging their tail. The shy, scared dogs don’t seem to connect with anyone.” Melody was adopted, but she was back at Friendicoes after a failed adoption. She was three and a half years old then.

She was special to Kuli, who kept pushing for her adoption on social media and at adoption camps. At an adoption camp at Puppychino, a dog-friendly café in Shahpur Jat, a girl asked Kuli which of the dogs had the least chance of finding a home. After spending some time with Melody, she adopted her. Melody was seven years old at that time.

Melody is a different dog now. She plays with other dogs, splashes in the mud and refuses to come back home from her walk. “Hers was an adoption we never thought would happen,” says Kuli.

Over the years, Kuli has made many friends. Some people are really special, she says. Two Saint Bernards were found on the highway in Karnal, partially paralysed and unable to walk. A young girl whose family has a farmhouse took them in. She has also made a swimming pool for them because water therapy will help the dogs.

Social media has been an important tool for Friendicoes to propagate adoption. On Instagram, they post regularly about dogs waiting to be adopted. “We make sure that we are completely transparent with people,” says Agnihotri. If the dog isn’t friendly with other dogs, or if it isn’t child-friendly, it’s all there.

Friendicoes has also collaborated with Heads Up for Tails, a pet store chain. A ‘meet and greet’ is held at their Khan Market store on Tuesdays and at their Chattarpur store on Saturdays. Many dogs have gotten adopted from there.

In 2015, when Friendicoes was in a huge financial crisis, they ran a crowd funding campaign and raised Rs 40 lakh in less than 48 hours through just Indian donors. The campaign was extended and within a month, Rs 1.1 crore was raised.

The money got them through their crisis, but it is still a very hand-to-mouth existence. At eight centres, nearly 1,500 animals are under their care. Ideally, they should have a staff of 700 to 800, but they only have 180 people. “Our expenses are skyrocketing,” says Kuli. The annual running cost is about `20 crore.

Still, they carry on with great enthusiasm. In a small room in their Defence Colony office, Pahua, a nine-year-old dachshund, has joined the conversation. Side by side, medical files of each and every dog are being meticulously organised.

Their hard work pays off. This year, Olive, a young desi, got adopted by an Indian couple based in Toronto. It cost them to fly her overseas but they were so keen to have her that they happily bore the expense.