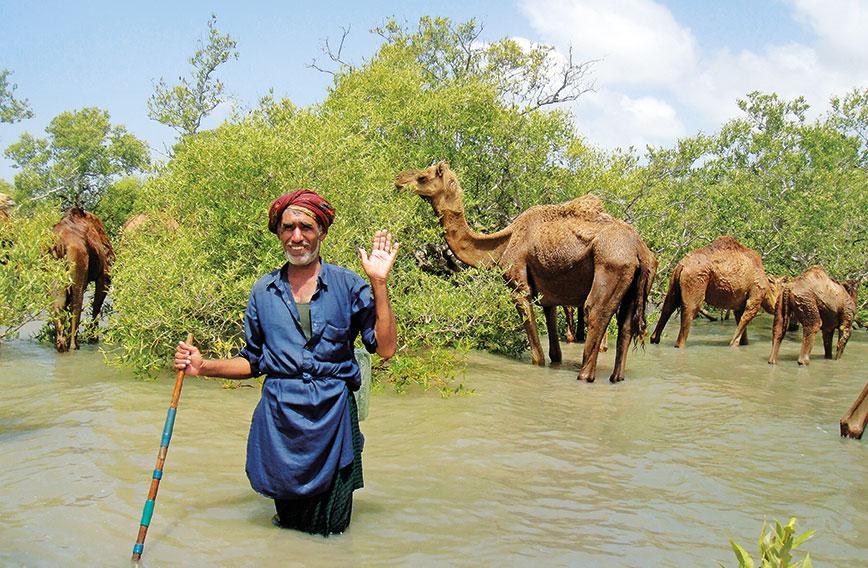 Go to the Gulf of Kutch and see the famed Kharai camel before it’s too late. There are just 2,000 of them left. The only breed of camel that swims, the Kharai camel can live in the desert and swim in the sea, a sight that is truly awesome.

“But only 2,000 Kharai camels now exist in all of Kutch district,” confirms Bhikhabhai Vaghabhai Rabari, president of the Kachch Uth Uchher Maldhari Sangathan (KUUMS) or Kutch Camel Breeders Association. “A decade ago we had about 10,000 such camels.”

The Kharai camel is starving to death even as the KUUMS haplessly tries to save it. The reasons are beyond their control.

Despite awards, rewards and recognition being heaped on the Kharai camel, the poor animal is on its way to extinction. In 2015, the camel was recognised as a breed, explains Ramesh Bhatti of Sahjeevan Trust, which has helped to organise the KUUMS and works diligently with them.

“The Breed Registration Committee of the Indian Council of Agricultural Research (ICAR) certified the Kharai breed on  January 6, 2015, after KUUMS applied for it. The Kharai camel has been registered as the ninth distinct camel breed of India by the ICAR. The KUUMS, the Anand Agriculture University, and my trust put in a lot of hard work to gain this recognition for the Kharai camel,” says Bhatt. The KUUMS is officially recognised as the owner of this unique breed.

But none of this has changed the suffering of the Kharai camel.

The Kharai breed is reared by the Rabaris and the Fakirani Jats, popularly known as Maldharis. Traditionally they rear milch animals like cows, goats, sheep and buffaloes. Rabaris live in the Bhachau and Mundra tehsils of Kutch. The Fakirani Jats reside in Bhachau, Mundra, Lakhpat, and Abdasa tehsils and the coastal districts of Gujarat.

The Kharai camels graze on saline plants like kharijar (Salvdora persica) and lano (Suaeda) and on mangroves in small islands called bets in the creek of the Gulf of Kutch. Every day the camels swim more than three kilometres to reach their grazing areas.

“We do not build any permanent structures for the Kharai camels on the islands. During the three monsoon months, the camels swim to the bets in the mangroves to graze and quench their thirst. We leave them there. In summer and in winter they swim to the bets nearer the creek, where they stay for two or three days before returning to the mainland,” explained Bhikhabhai. An adult male camel consumes 20 to 49 litres of water daily.

The problem is that the mangrove belt, which Kharai camels depend on for food and water, is being rapidly destroyed by industrialisation and encroachment. Power plants, jetties, ports are all swallowing the camels' grazing area. And where the forest department plants mangroves, it does not allow camels to graze there.

“Our camels have no fodder left. The KUUMS approached the National Green Tribunal (NGT). It has restrained industries from ruining the coast but who is listening. A large number of Fakirani Jats moved southwards to Jamnagar, Bhavnagar, Vadodara and settled in Aliyabet in Bharuch.”

Aliyabet in the delta of the Narmada river had good-quality grass for camels. But that, too, faces a water problem now. With a dam being built upstream, potable water is no longer available.

He himself lives in Jangi village and has 100 Kharai camels. “I can recall five generations having these camels. Rabaris additionally rear cows, buffaloes, goats and sheep close to their homes. However, my camels are looked after by Fakirani Jats who keep them in the mangroves of Bhachau and move them to the land after the monsoons.”

The Kharai camel is distinct from its relative, the Kachchi camel. The ears are woolly, slightly flattened at the tip and upright. They have small chests and medium-sized, gently padded feet that are well adapted for wet, sandy coastland. Their wool is smoother and finer than the Kachchi camels.

The Kharai camel also produces less milk than the Kachchi camel. Kharai milk has a higher fat content and is considered therapeutic.

Eighty-three-year-old Vadhubhai Andabhai Rabari says that when he was 45 he got pneumonia and was saved by Kharai camel milk. “The doctors gave up on me. But I survived by drinking this milk. Look how strong I am four decades later,” he says.

Camels have limited access to veterinary services as they live in remote areas. On  July 9, KUUMS held an inoculation programme in Bhuj. It was attended by 1,600 camels, said Bhikhabhai.