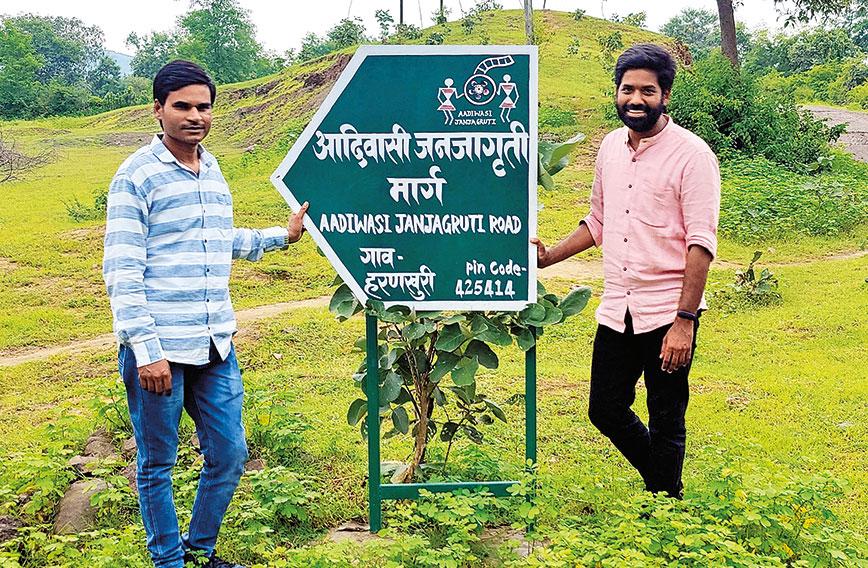 WHEN Arjun Pawara won the election for the post of sarpanch in the Dhadgaon block of Nandurbar district in Maharashtra in October this year, it was really no surprise.

Pawara is the face of the Aadiwasi Janjagruti, which makes  videos on development problems and gets them resolved. Thanks to their efforts, long-sought civic amenities have been provided such as a road and tubewells.

Five of his colleagues from the Aadiwasi Janjagruti were also elected ward councillors as people, grateful for being given a voice, now chose them as their representatives.

The Aadiwasi Janjagruti is a unique effort in hyperlocal journalism by making videos on government schemes, social issues and local demands for infrastructure. They also expose corruption and mismanagement.

Made in the local dialect, the films are avidly watched when they go viral after being uploaded on social media. (See Civil Society July 2021).

Residents of Harankhuri village had been asking for a road for 25 years. They finally got it within a year due to the efforts of the Aadiwasi Janjagruti which highlighted their plight. The team not only proposed the road, they pushed for it and stayed at the site to supervise construction.

It all required a lot of back and forth with the panchayat. The residents of Harankhuri were so happy they named the brand new road Aadiwasi Janjagruti Marg. Similarly, people from Aamkhedi, who had to walk nearly four kilometres to fetch water, finally got borewells as a result of the Aadiwasi Janjagruti’s videos and persistence.

The panchayat in the Dhadgaon block comprises the two villages of Harankhuri and Bhujgaon. It was the residents of the villages who urged members of the  Aadiwasi Janjagruti team to contest the elections.

Their reasoning was that if without political power the team could achieve so much then by being in local government they would bring in radical and quicker change. Also, the performance of the previous panchayat had disappointed them.

In February 2022, the Aadiwasi Janjagruti team held a meeting to discuss whether its members should stand for election. It was only as recently as September that they decided that 33-year-old Arjun Pawara would contest the post of sarpanch and seven other members would stand as ward councillor candidates. Over the years, every volunteer in the team has come to be regarded as a local leader in his or her own way. “I was not interested in politics but the people kept urging me to contest. So, I decided to give it a chance and plunged in,” says Arjun. 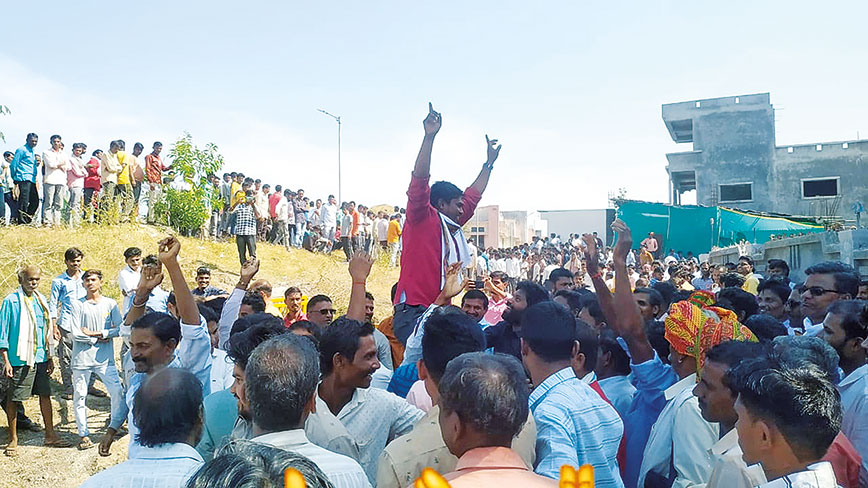 Arjun Pawara and the team celebrating their victory

“Arjun has been the face of the work that we do. Everyone knows him,” says Nitesh Bhardwaj, who set up Aadiwasi Janjagruti in 2016 and was joined by Arjun and Rakesh Pawara.

Earlier, people elected a ward councillor for each ward and they subsequently elected the sarpanch. Recently, the Maharashtra government changed this system. Now each ward has its election for ward councillor. A separate election for the post of sarpanch is held for which people vote directly.

The total voter turnout on October 16 for the sarpanch election was over 850. Arjun won with 440 votes. The other candidates, Vipul Suklal Pawara, 37, and Padvi Suresh Dohanya, 40, got 249 and165 votes, respectively.

Right from the beginning of the campaign, the Aadiwasi Janjagruti team decided to keep their reportage independent of politics. “We made it a point to not make any videos or use our platform for campaigning,” says Bhardwaj. “We will report on the work a person has done, but not promote a person.”

After finalizing their candidates in September, they designed their own posters.  They would usually campaign late in the evening or at night since all their volunteers were caught up in Aadiwasi Janjagruti work in the daytime. They would go door to door and speak to residents.

Rakesh Pawara, who works as cluster manager in a rural livelihood mission run by the Maharashtra government and is an integral part of the Aadiwasi Janjagruti team,  led the campaigning along with Bhardwaj.

“We emphasised that Arjun, who is studying for a PhD in rural development from North Maharashtra University,  was a highly qualified and educated candidate for sarpanch,” says Bhardwaj.

“We underlined that this is the first time in the history of this panchayat that a PhD candidate was standing for the post of sarpanch.”

They also emphasized the work the team had done for the local people. Many of the issues which residents had been struggling with for the past 14 to 15 years and their repeated requests to the administration had been successfully taken up by volunteers of Aadiwasi Janjagruti.

Their manifesto included making Harankhuri and Bhujgaon a model gram panchayat. Also included was upgrading the infrastructure and the buildings housing the anganwadis and ensuring the children get more nutritious food. Building a library for the school which students have been asking for was on their agenda. Installing streetlights and removing corruption at the panchayat level were also important issues.

Most candidates spend heavily campaigning for local elections in Dhadgaon.

The Aadiwasi Janjagruti spent around `45,000 on campaigning. Most of this money came from personal funds or from friends. Some money was raised via crowdfunding.

The expenditure was mostly on petrol, food for the team, travel, banners and posters. “People would tell us that to win an election in Dhadgaon you have to pay the voters at least `1,000 each. Funnily, the opposite happened with us. People in the village put together small amounts of money to help us campaign, ” says Bhardwaj. In the ward in which they helped build the road, people raised `10,000 for their campaign.

One advantage the team had was that for the past four or five years, they had interacted with the panchayat, the gram sabha and the local administration. This equipped them with an understanding of how the system worked.

The Aadiwasi Janjagruti would approach the panchayat with issues and questions on civic amenities. While these discussions would eventually lead to action, the team also had to encounter a lot of friction. Since last year people of both villages had been urging them to stand for elections themselves.

Arjun Pawara was in a unique position as these interactions with local institutions enabled him to understand the functioning of the panchayat, the manner in which funds are procured, the responsibilities, grassroots politics, the structure and corruption. Last year, Arjun, Rakesh and Bhardwaj visited Chhattisgarh for an event where they spoke about how the panchayat works and their personal interaction with the system.

Winning the post of sarpanch and five out of seven wards was a pleasant outcome for the team. Campaigning for the councillor posts and for sarpanch was done simultaneously. The new panchayat started its six-year term on October 22. Its progress will be followed enthusiastically.