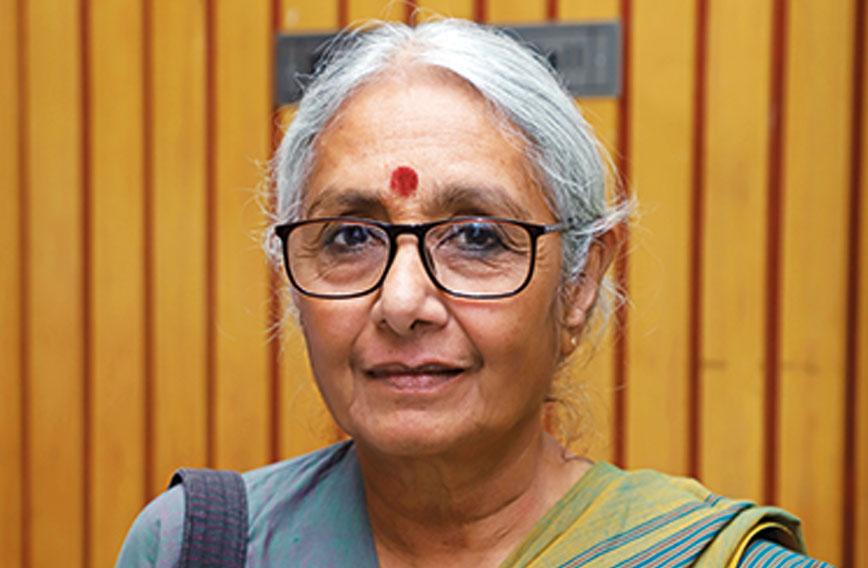 Aruna Roy: ‘MGNREGA has served as a lifeline for the rural poor’ | Photograph by Shrey Gupta

Aruna Roy: ‘MGNREGA is being sidelined by govt’

When farmers make no money, the rural economy comes to a standstill. Incomes shrink. Wages of agricultural labour have declined in the past two years and activists working at the grassroots say there is acute rural distress. The Mahatma Gandhi Rural Employment Guarantee Act (MGNREGA) was supposed to be a fallback in troubled times such as these by providing 100 days of work and timely payment.

However, just when it is most needed, MGNREGA is beset with problems. It is inadequately funded, payments to workers are inordinately delayed and social audits, to check corruption, aren’t being done.

MGNREGA is the world’s largest job guarantee programme. Since the time it was launched under the Congress, it has created rural roads, irrigation, water-harvesting structures and more. If implemented vigorously now it could buttress the flailing rural economy. The new state government in Rajasthan has taken some steps soon after coming to power. But nationally MGNREGA tends to suffer.

We spoke to Aruna Roy, one of the architects of MGNREGA, about how the programme is faring and what could be done about rural distress.

Since you work closely with rural communities, how severe is rural distress?

Rural distress has been a continuing phenomenon faced by a vast majority of the rural poor including farmers, agricultural workers, artisans and others dependent on the rural economy. Successive years of drought and economic upheavals such as demonetisation, poor monetary returns on agricultural produce and skewed terms of lending by formal financial institutions have exacerbated this distress and made people far more vulnerable in the last two years. Rural distress is significantly severe and needs a well-thought-out, sustainable and comprehensive plan of action.

Is MGNREGA living up to its promise? Or is the employment guarantee programme in the doldrums?

MGNREGA was conceived as a measure to address rural distress, systemically, and it remains the most tested method to tackle it. We shouldn’t forget that despite the fall in employment figures, MGNREGA has played an important role in protecting the lives, livelihoods and wages of rural workers. It has provided vital support to vulnerable communities, including those facing distress due to natural disasters and calamities.

Unfortunately, MGNREGA is being deliberately sidelined by the Union government and many state governments, depriving people access to important, legally-supported structures. The remedy lies in immediate intervention so that there can be a renewed commitment to MGNREGA, as is now happening in Rajasthan.

According to the National Council of Applied Economic Research (NCAER), one out of every three rural households has worked in the employment guarantee programme. MGNREGA has served as a lifeline for the poor. In 2017-18, close to eight crore people worked under MGNREGA.

The facts speak for themselves. In 2017-18, the average number of days worked per household was 46 days. This, despite lack of political commitment and the programme functioning at half its 100-day ‘guarantee’.

According to an NCAER report, at least 25 percent of the decline in poverty since 2004-05 for participating households can be attributed to MGNREGA. After stagnating for at least three decades, the growth in real rural wages, especially agricultural wages, picked up in 2007-08  after MGNREGA’s inception. The average growth rate of rural revenue jumped from 2.7 percent per year in 1999-2004 to 9.7 percent in 2006-2011.

Women’s participation in the workforce has increased substantially due to MGNREGA, and enabled their access to formal financial institutions and the economy. Around 40 percent of total households employed under MGNREGA every year are SC/ST households. Eighty-two percent belong to the low (bottom 30 percent with a monthly income upto Rs 657) and middle income group (middle 40 percent with a monthly income between Rs 657 and Rs 1,057).

Another major violation of the basic rights of workers comes from the delay in payment of wages. The Act mandates that workers have to be paid within 15 days of completion of work.

The year 2017-18 has also seen an alarming number of starvation deaths which can be linked to devastating rural distress. Although MGNREGA could have become an important source of economic security for these households, we find that in nearly all 74 starvation cases, despite having job cards, work was not provided to these individuals and households in the last two years.

Are there sufficient funds for implementation of MGNREGA? How should it be funded so that it doesn’t falter?

Being a demand-driven programme, MGNREGA cannot be bound by budgetary constraints and restraining the flow of funds, as per demand, is a violation of the law. The Government of India (GoI) has, however, made it supply-driven — violating the core principles of the Act.

The irony is that every year the finance minister announces that the allocation for the programme is the ‘highest ever’. However, the inflation-adjusted allocation for 2017-18 is lower than even 2010-11. In the last five years, one-fifth of the allocated budget was spent on clearing pending payments.

This has led to a vicious cycle with crores of workers denied wages for work done. This is unethical and unconstitutional. Even World Bank economists, one-time critics of the programme, recommended that at least 1.7 percent of the GDP be allocated for the programme to run robustly! Allocation dramatically declined from 0.58 percent in 2010-11 to 0.26 percent, despite increased GDP for the period. Telescoping shortfalls in providing funds pushes the financial crisis to the latter half of the year, when demand for MGNREGA employment peaks.

As of January 2, about 99 percent of allocated funds have been exhausted (including payment dues) with no funds in the pipeline.

How should MGNREGA wages be released so that it is timely and reaches people?

The government must ensure payment of wages to workers within 15 days of them completing their work. When the financial flow is blocked by the GoI, state governments are compelled to instruct functionaries not to register demand. The situation has dire consequences during drought, as in 2015-16.

The statutory unemployment allowance, which has to be paid in 15 days for denying demand, never gets paid. Legal entitlement and accountability must lie with the central and state governments to ensure flow. MGNREGA has driven the creation of crores of bank accounts for rural workers, particularly women. The government must ensure that technological limitations and bottlenecks do not deny workers their legally due wages.

The Act mandates payment within 15 days on completion of work. The state governments are to process muster rolls for payment in 10 days. The GoI ought to transfer the money to the workers’ bank accounts within two days of receiving  electronic pay orders from the state government.

Delay by the government is calculated for the payment of delay compensation. The central government’s delay is unfortunately not taken into account. Once the payment order is released by state governments, the payment is considered to be completed and any delay thereafter is not reported at all.

According to a study in 2016-17 and 2017-18, the delay by the GoI in releasing funds was 56 days on an average for 10 states in India. Conveniently, the ‘delay compensation’ by the central government is left uncalculated! The study found that in contrast to tall claims of ‘on time’ payments by the GoI and state governments, only 21 percent and 32 percent of wage payments were made within the stipulated 15-day period in 2016-17 and 2017-18, respectively.

A year-on-year decline in wages for agricultural labour is reported. What is the minimum wage you would like the states to implement?

The legality of delinking MGNREGA wages from minimum wages has been questioned by multiple committees set up by the Ministry of Rural Development, the Central Employment Guarantee Council and the Karnataka High Court. It also stands in violation of the Supreme Court’s judgments.

Wages in MGNREGA still await reconciliation with the Minimum Wages Act. Nor has the GoI implemented the recommendation to index MGNREGA wage rate to the Consumer Price Index. This has led to the stagnation of MGNREGA wages in real terms with little increase in nominal wages.

The MGNREGA wages in Assam, Bihar, Jharkhand, Uttar Pradesh, Rajasthan, and Uttarakhand have either not increased at all, or increased by just `1 for 2017-18. The Jharkhand government questioned this in a strong letter to the GoI. Wages for MGNREGA must be immediately linked to the statutory state minimum wage and indexed to inflation.

There are complaints of corruption and harassment. How are social audits working?

Apart from Rajasthan and Haryana, all other states have set up independent Social Audit Units, reflective of lack of political will and fear of accountability. They are not uniform in performance. Some states do well and others conduct them only in name. However, what is required is more pressure from people to make this particular accountability system function.

Social audits have been formally recognised by the CAG. Auditing standards have been developed to ensure that participatory, objective, evidence-based information is collected, so that social audit findings lead to sanctioned outcomes. Social audits have also been ordered by the Supreme Court not only for MGNREGA, but also for the National Food Security Act, Juvenile Justice Act and the Building and Other Construction Workers Act. When implemented, social audits in Andhra Pradesh, Telangana, Jharkhand, Meghalaya, and Sikkim, have fought corruption and put accountability systems in place. They have empowered citizens’ participation, and facilitated questioning of local governments about corruption, performance and fall in standards.

You are based in Rajasthan.What are your expectations from the new Congress government?

The newly elected government must implement the promises made in their election manifesto. They have already made some efforts in painting transparency boards and accepting our demands. On January 5, they started a Rozgaar Diwas on two Thursdays and a ‘Kaam Maango Abhiyan’ (demand work agitation).

This special campaign is from January 5-20. Officials have been instructed to issue receipts to facilitate unemployment allowance. They have also been asked to help workers complete the 100 days of work that they are entitled to.  After 90 days workers will be entitled to automatic inclusion for labour cards.MGNREGA has again begun to get momentum in the villages in Rajasthan.

However, if they do not create an independent and effective social audit unit, they will fail the expectations of ethical governance gravely. It is a matter on which the government’s performance will be critically evaluated.

In which areas would your organisation, the Mazdoor Kisan Shakti Sangathan (MKSS), be keen to work with the new government?

The MKSS has always engaged with governments, as all rights have to be ultimately put in place through political will and bureaucratic compliance. We will continue to engage with the government at the panchayat, block, district, and state level. For example, some MKSS workers will help with training and organising camps for work enrolment. There are unionising processes in place to ensure that 10 entitlements are implemented. Advocacy and struggle, exercising our democratic right to peaceful protest and agitation, are tools that are intermittently necessary to make power accountable.

The state government has increased pension to Rs 750. But how should pensions be delivered to the elderly?

As members of the Pension Parishad, we strongly and firmly believe that the elderly, single women and the disabled have a right to access pensions that are equivalent to half the statutory minimum wage of the state, indexed to inflation.

These pensions benefit some of the most vulnerable and marginalised communities of the country who face innumerable limitations like distance, mobility, age and autonomy to access pensions. Pensions must be paid to them in their own gram panchayat and ward. To prevent inherent corruption in the implementation of such cash transfers, dispersal of wages in a public place in the village in front of claimants and witnesses is the best way to prevent misappropriation.