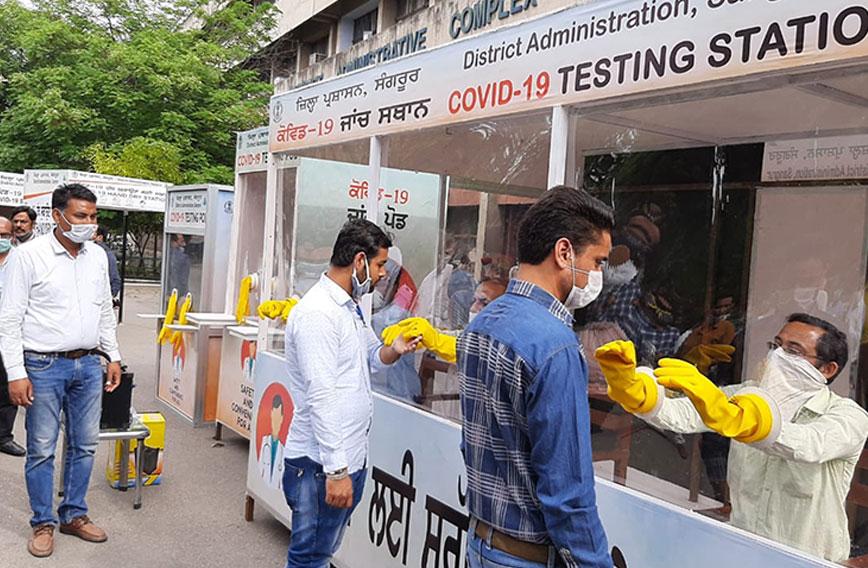 Samples being collected in Sangrur

Officers who in normal times are known to stick to the rule book have outdone themselves by being flexible, innovative and firm while enforcing social distancing, getting tests conducted and making sure citizens have access to basic services.

In Punjab, at least two districts exemplified themselves: Sangrur and Nawanshahr (recently renamed Shaheed Bhagat Singh Nagar) with the local administrations rising to the occasion in the unprecedented battle against the coronavirus.

In Sangrur, the administration has come up with a localized solution for testing individuals. Taking inspiration from South Korea, a testing pod has been devised by a team headed by Deputy Commissioner Ghanshyam Thori. It is a portable structure, much like a phone booth in design and size, with a front-facing polycarbonate glass sheet.

A doctor or trained medical personnel stands behind the polycarbonate sheet and swabs the nose or throat of an individual using arm-length gloves built into the booth. The pod prevents direct contact between the doctor and potential coronavirus carriers, thus enhancing the safety of the medical staff. It can easily be put up in any of the sensitive areas with minimum effort to speed up testing of the local population. 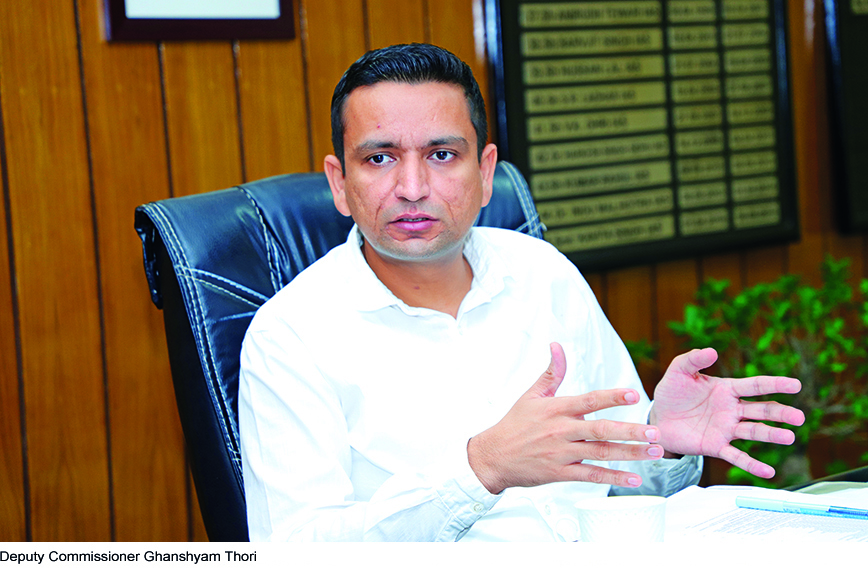 “The booth concept was first used with great success in South Korea. Here, we were basically looking for an effective, low-cost solution to address our testing needs. We narrowed down on this idea, and our innovation team customized the design to suit the Indian conditions,” said Thori. The pod costs only Rs 25,000 to make.

Thori says the testing pod is the result of an effective public-private partnership. “Once we finalized the design, we involved the local industries chamber to create a prototype. We were able to fabricate it and carry out the initial tests quickly,” he says.

The team sourced the raw material from Baddi in Himachal Pradesh and involved a vendor from Moga to manufacture the booth. The Sangrur administration now has a total of 10 such testing pods installed at strategic locations, including hospitals, across the district.

With the testing pods, this will change. Many more tests will be conducted quickly though the samples will still have to be sent to Patiala. Going by the South Korean experience, it takes only seven minutes for a test to be done at these booths. The small size of the booths means that they are easy to disinfect as is required for each testing facility after a test is done. Hospitals, as of now, use a room to carry out the tests.

“At present around 50 percent of the new tests are being done at these pods. In the coming days, these will be used to carry out 100 percent of the tests at various locations in the district,” says Thori. The administration is hoping to ramp up the testing numbers with the availability of rapid testing kits. It is looking forward to receiving these kits from the Punjab government.

Thori says the state will be acquiring 10,000 rapid testing kits. Each kit is fashioned to carry out 100 tests, which translates into a total of one million tests across the state.

“The testing pod will be especially useful in the eventuality of a spike. I have been getting enquiries from other places as well and one such pod has already been installed at Government Multispecialty Hospital (GMSH), Chandigarh,” Thori says.

The district administration of Nawanshahr has been successful in containing the spread of the virus in much the same way as has been done in Bhilwara in Rajasthan. When the number of cases seemed to be rising rapidly, the Nawanshahr administration successfully deployed an elimination strategy, which has proved a success in countries like New Zealand. From a peak of 19 cases on March 26 the number of coronavirus cases in the district has been reduced to two, with no new cases reported.

Nawanshahr’s Additional Deputy Commissioner Aditya Uppal says: “We got our first case on March 19, and the numbers quickly increased to 19. This was largely on account of a single international traveller who had got in touch with a number of people.” Baldev Singh, a priest from Pathlawa village in the district, had visited Germany and Italy and was detected coronavirus positive only after his death on March 19. Owing to the spike, the district was declared the first COVID-19 hotspot of Punjab.

Uppal says that the district administration quickly swung into action and carried out an aggressive contact tracing exercise. “Through contact tracing, we came to know that people from 15 villages had got in touch with him. We carried out the sampling and testing of these individuals, but we did not wait for the results. We sealed Pathlawa village on March 19, and sealed all 15 villages in the next two days,” Uppal says. 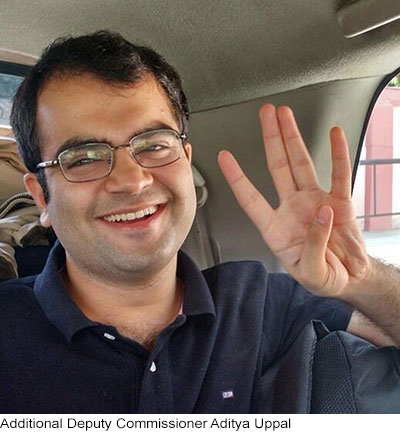 Incidentally, Bhilwara in Rajasthan too reported its first COVID-19 case on March 19. Though Uppal doesn’t mention any communication between the two administrations, both districts followed similar containment strategies and were able to control the spread effectively. “Geographical containment of suspect cases is of utmost importance to tackle such a situation. If you are not able to contain the virus to the given geographical area, the situation can quickly spin out of control,” he says.

Though no new cases have come in, the administration, however, has not let its guard down. As part of its strategy, it has deployed ASHA workers in rural areas and booth level officers (officials who manage a polling booth during elections) for conducting door to door surveys with a brief to check symptomatic individuals.

Uppal agrees that these are early days yet and the situation can change at any time. “We simply cannot afford to be complacent. We are responsible for the lives of thousands of people and we will do our best to protect them at all costs,” he says.

The Deputy Commissioner, Vinay Bublani, said: “We have focussed on home quarantine, containment and complete lockdown. We are keeping a close watch on patients in the isolation ward. The district administration, police and health department are working round the clock to ensure things remain in control.”