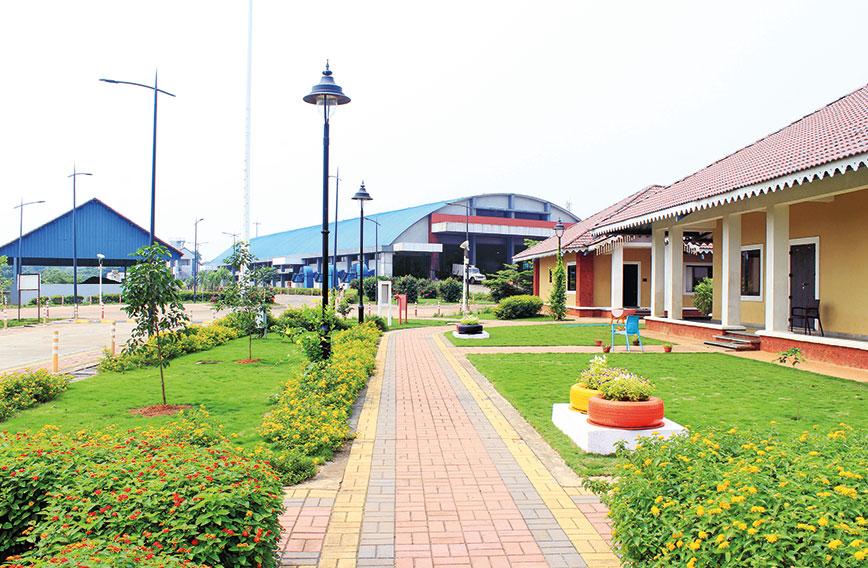 A view of the `140 crore waste treatment plant at Saligao

When Sanjit Rodrigues, managing director of the newly-formed Goa Waste Management Corporation, says the Rs 140-crore modern waste treatment plant at Saligao, which he personally oversees, is power-surplus, it makes one sit up and take notice.

This ultra-modern facility generates 7,000 units of electricity every day. Of this, 4,000 units are consumed by the plant and the remaining 3,000 are pumped into the grid.

But this is not the only reason bureaucrats and political leaders from other parts of the country make it a point to see and understand the working of this bio-methanation plant. It is a beacon of hope in a state overwhelmed by garbage.

Goa is home to about 1.5 million people and it plays host to around six million tourists every year. It generates over 1,000 tonnes of garbage a day and coastal villages and municipalities are struggling to cope with it. The 1,400 hotels along the northern coastal belt alone generate 100-150 tonnes of garbage per day.

Goa first suffered a garbage shock in 2005 when the High Court shut down the dump at Curca-Bambolim which is located around nine kilometres from the capital. Then, it was a struggle, especially for Panaji, to collect and dispose of 50 tonnes of garbage generated each day.

This eventually resulted in a system of over 100 composting pits scattered across the city to take care of wet waste. Rodrigues was the commissioner of the corporation of Panaji when this happened and together with a waste treatment expert, Clinton Vaz, who was hired as a consultant, he mapped the city and built a system of sorting centres and composting pits which held the city in good stead.

But few believed this solution could be replicated in the rest of Goa and the search for an ideal waste treatment plant never stopped. While towns like Cuncolim, Margao, Bicholim and Mormugao have small plants, the big one eluded Goa for a decade. Not having a single entity at the apex level to coordinate all waste management efforts was also a hurdle.

In December 2016, the state government set up the Goa Waste Management Corporation (GWMC) to deal with all garbage related issues including dump sites. Explaining the brief of the GWMC, Rodrigues says, “Waste collection and disposal is a subject that is dealt with by the local bodies. Somewhere down the line the government felt that, barring a few local bodies which are rich, the others cannot handle the issue. An agency is required to hand-hold local bodies in terms of technology and methodology. We need a change in mindset. All this needs to be piloted through an agency. The GWMC was formed to do this job.”

The aim of the GWMC is to create a zero-waste Goa by 2020. “We have one philosophy. We have to have a zero-waste community and a zero-landfill society,” asserts Rodrigues.

It’s an ambitious plan which will bring together a complex collection system and four treatment plants, three of which are yet to be built.

The biggest hurdle faced by the state is the reluctance of households to segregate waste at source. This was emphasised by Prassana Nagvenkar, sarpanch of Reis Magos, a village located opposite Panaji, but across the Mandovi river. 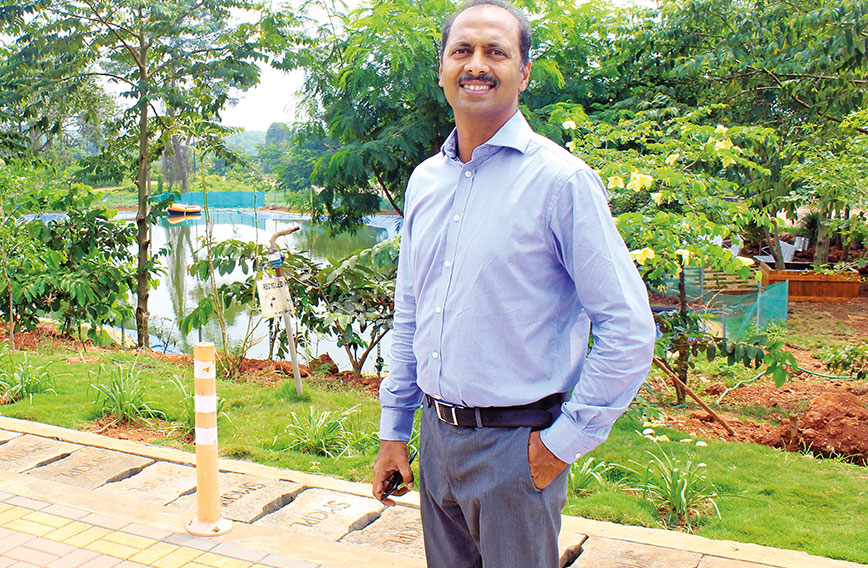 “People are reluctant to segregate at home because they have to keep two bins. Second, there is a clash of timing between the garbage collector and the office,” says Nagvenkar.

Reis Magos, like some other villages in the state, has put together a system of eight workers and one van to collect garbage and deliver it to the Saligao plant, which is about 10 km away. “This costs the panchayat nearly Rs 1,00,000 per month,” says the sarpanch. The panchayat has now submitted a Rs 25 lakh proposal to the director of panchayats for covering 2,500 households spread across 11 wards.

The panchayat requires at least two workers per ward and each is paid approximately `6,500 a month. This, then, is the broad economics of waste collection at the village level. All the waste is sent to the treatment plant at Saligao.

Earlier, contractors were hired to dispose of the garbage. No one knew where. No one asked. Now, the Saligao plant seems like a solution, perhaps the only solution.

The government’s thinking on garbage collection and disposal, to a great extent, is guided by the Panaji experience. Initially, Panaji was like any other town. Garbage was collected through community bins. From concrete bins it went to metallic bins. “Today an open community bin is the last thing that my department would want,” asserts Rodrigues. “In order to get rid of the bin, Panaji worked on a door-to-door collection system and we got rid of 1,200 community bins.”

While Panaji got a robust collection system, it still lacked a place to dump the garbage and this led to installation of composting pits. “We worked on a treat-your-own-waste system,” says Rodrigues.

So which is better? A decentralised system with composting pits or large plants?

Saligao, which is adjacent to Calangute, is probably the place to look for an answer. It was here that the segregation and collection model was born, thanks to the spirited effort of activists and residents led by Muriel D’Souza and Mario Mascarenhas, their two children and members of the Saligao Civic and Consumer Cell (SCCC).

It was in 1988 that Mario and Muriel first noticed that garbage generated in hotels in Calangute was being freely dumped in a laterite quarry on the Saligao plateau, now used to construct the plant. Gradually, all garbage generated in the coastal villages found its way into Saligao.

“The place became a colony for over 200 dogs,” says Mario, “and kites would pick up the garbage and drop it into the village. During the monsoon water would turn the garbage in the quarry into a toxic soup and it would percolate into the aquifers.”

This situation eventually led to the formation of the Saligao Civic and Consumer Cell under the panchayat. At one point it was decided to block access to trucks bringing garbage by putting concrete obstacles across the route. But this failed after the block development officer ordered their removal.

After formation of the Cell it was decided that something had to be done about waste collection. A system comprising two trucks and a group of volunteers started collecting dry waste once a month from all the wards of Saligao. The waste was then handed to a contractor who dumped it in Tivim, 13 km away. This system was later handed to the panchayat which instead dumped the waste at the quarry which had become a garbage site for literally everyone.

About this time the Waste Management Committee of the Saligao panchayat, along with villagers and members of the SCCC, launched an educational drive in the village, where segregation and local treatment of bio-degradable waste was demonstrated with kits by Muriel, Mario and their children. This quickly became popular and the duo was called to schools and neighbouring villages to give demonstrations. This kick-started the awareness programme and collection of dry waste in other villages commenced. From this was born what Mario called the blueprint for segregation and treatment of all waste. Sadly, it never picked up. 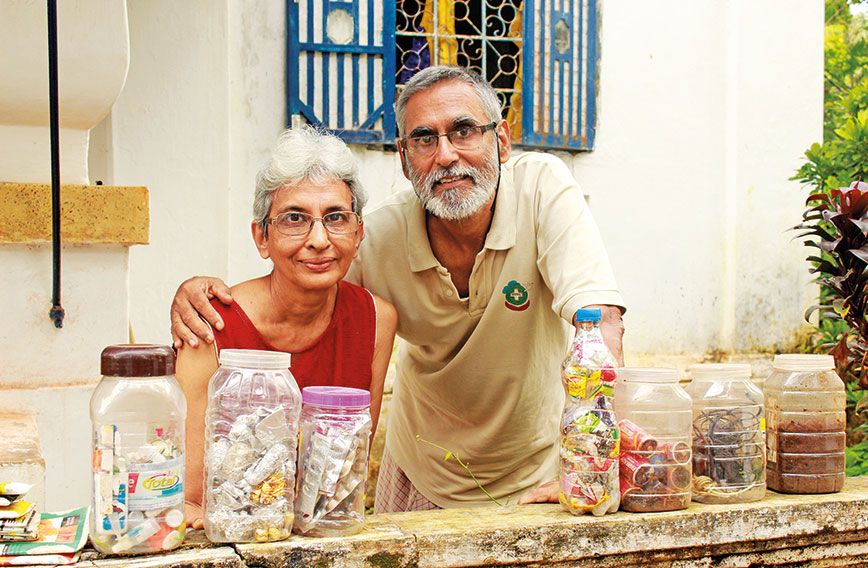 “People from all over Goa came to borrow the blueprint and there are many people who are treating their bio-degradable waste, but not the large mass of people,” laments Mario. “If this blueprint were implemented we wouldn’t need a plant.”

But even as Mario and Muriel continued to give demonstrations on the benefits of segregation at source, in the capital plans were being drawn up for construction of two treatment plants, one at Saligao and the other at Curchorem in the south. To silence the naysayers and kill the not-in-my-backyard attitude, Chief Minister Manohar Parrikar took a huge delegation of bureaucrats, representatives from Saligao and Curchorem, and journalists on a Europe tour.

This would eventually result in a legal clash between Mario and the Goa Foundation on one side and the government on the other. And so, Mumbai-based Hindustan Waste Pvt Ltd, which won the tender, began construction of the plant on 1.18 lakh sq m in the backdrop of two cases — one in the High Court and the other before the National Green Tribunal.

“The plant was built on a 25-year-old dump,” says Rodrigues. “It was as high as this building and we remediated 55,000 tonnes of garbage before commencing construction. The covered piles outside are remediated waste comprising plastic which will be sent to Karnataka for co-incineration.”

Goa sends all its plastic waste for co-incineration. Between January and May this year an average of 300 tonnes was transported each month to Vasavadatta Cement at Sedam, Karnataka. Each month an average of 30 truck trips are made at the cost of `22,000 per trip. “It’s a small cost for a big return,” says Rodrigues. The big return being zero landfills.

The GWMC also collects non-recyclable waste from villages and municipalities and sends it for co-incineration. “We encourage panchayats to remove recyclable material and sell at their own level,” says Rodrigues. The corporation also runs a programme where it collects waste directly from 400 high schools called ‘zero waste school, home and community’.

While the government waited with baited breath for the plant to start, the legal battle took a different turn with the NGT ordering both parties to sit across the table and resolve the issue. The demands of the petitioners were simple: a) shift the plant 700 m away, b) remediate all the existing garbage, especially the waste lying in the old laterite quarry, c) instal CCTV cameras, d) allow a committee of Saligao residents to inspect the plant to ensure that it is running.

All the demands were met by the government, except shifting the plant because construction had already commenced and the final hurdle to its inauguration was cleared.

For the government, the construction of the plant was a way of showing Goa that systems which are clean exist. It has now set its sights on constructing a 250 tonnes per day plant at Bainguinim, which is around eight km from the capital. The GWMC has already written to the directorate of municipal administration to hand over 1.71 lakh sq m.

The GWMC is at present working on a waste disposal policy envisaging four zones with one plant each and regional centres to collect and dispose of waste from all over Goa. “Our model will be a mix of regional (plants) and local community efforts.”

For Mario and Muriel, who spent a decade spreading awareness about segregation at source and treatment of bio-degradable waste at the local level, the construction of a plant in Saligao represents partial failure of their method.

Their success, however, is that the GWMC has realised that segregation at source is indispensable, even though the Saligao plant is touted as having the capability to treat mixed garbage. Says Rodrigues, “The only way to improve the efficiency of the plant is by segregating garbage at source.”

In a way, Goa appears to have chosen the best of both methods and, as Rodrigues says, “It’s a work in progress.”