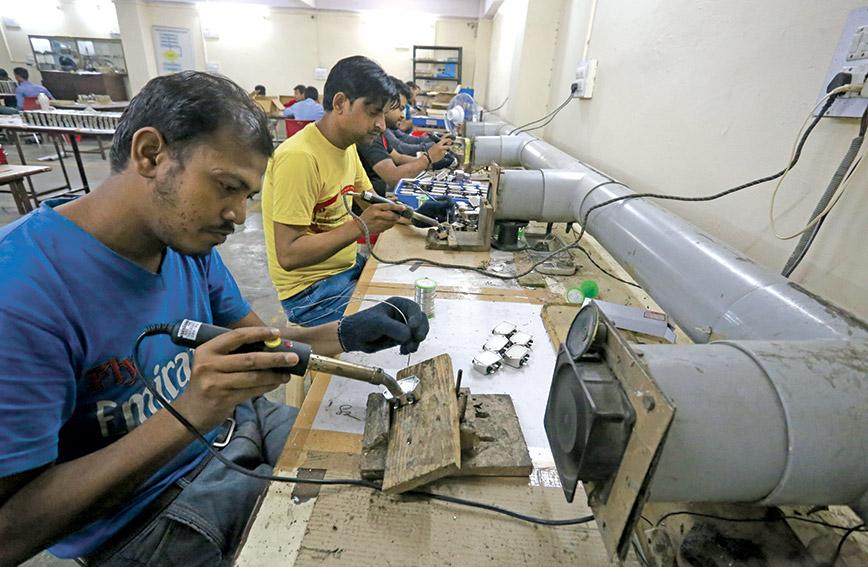 On the job training is vital for vocational education

Roadmap for skill training to provide the young more jobs

The snobbish divide between academics and skills should end and vocational education should be transformed into an aspirational university system closely linked to industry, says a report submitted by a committee of experts set up by the Union Ministry of Skill Development and Entrepreneurship (MSDE).

The committee’s recommendations have urgency in the light of concerns over how India is going to reap the benefits of the demographic dividend. The number of the educated unemployed will climb from 7-8 million to 10 million per annum by 2020.

The committee's report says India should set its targets high and aspire to make young men and women getting vocational training here employable anywhere in the world. India can become the ‘skilling capital of the world’, says the report.

Vocational Education and Training Colleges (VETCs), on the lines of medical and engineering colleges, can be set up that offer certificate, advanced diploma and degree level courses. Students should alongside learn at least two academic subjects and soft skills. The ITIs, nursing colleges and other diploma colleges can become VETCs.

The VETCs should be affiliated to a National Vocational University. The Indian Institute of Skills in Kanpur, for instance, could become a university. For dropouts the VETCs can have Skill Development Centres but those who join would need to achieve a certain level of competence.

For people from the informal sector, prior learning can be evaluated, gaps identified and training provided.

The VETCs should be close to industrial clusters so that students can get hands-on apprentice training while they are learning.

At the top, students and trainers can aspire to go to an institute like the Apex Hi Tech Institute in Bengaluru which offers courses in mechatronics, instrumentation, industrial automation. Nanotechnology, artificial intelligence and robotics can be added here.

To keep pace with industry’s changing needs, the National Skill Development Council was set up in 2008 followed by its sister agencies. The idea was to raise resources and help industry skill, train and absorb youth in jobs.

Unfortunately, the present system is not owned, led or financed by industry. Instead, financed by the government, vocational education is churning out unemployable youngsters after putting them through shoddy short-term courses, creating a supply-driven system. For instance, under the Pradhan Mantri Kaushal Vikas Yojana, which focused on dropouts, only 8.5 percent got employment.

Vocational education and training have also suffered because it has been stigmatised as being inferior. It was seen as a career path for dropouts and the economically and socially disadvantaged. Those who joined got low-paid jobs with no upward mobility.  Academics and skills weren’t converged. So the smart set went to college and acquired knowledge but no skills. This is the reason why India produces millions of unemployable graduates even as industry complains about lack of skilled manpower.

The committee recommendations include a slew of reforms including changing the institutional framework.

The starting point of all skilling schemes is the status of the job market. The committee has recommended that the Directorate-General of Training set up a National Labour Market Information System (LMIS) and modernise all 978 Employment Exchanges across the country to provide counselling, guidance and facilitate employment. For this, the Directorate-General of Employment, which traditionally tracks the job market, be shifted from the labour ministry to the MSDE.

A Central Advisory Board on Skill Development with ministers of all departments which offer skilling programmes and heads of regulatory bodies can ensure coordination across ministries.

Sector Skills Councils (SSCs) were formed to gauge the manpower needs of industry and the skills required and to ensure these were fulfilled. Forty SSCs have been set up by the NSDC, with 26 sectors being taken from the Planning Commission’s priority list of important industries. The rest have been formed in an ad hoc manner. Strangely, the education and skill development sector has been left out.

But the SSCs seem to be awash with confusion. They have contradictory responsibilities such as setting standards and also testing them. They have also been outsourcing the setting of competency standards to consultants who often don’t have the expertise. The report calls into question the credibility of the SSCs.

The report suggests that the SSCs be streamlined. They should be owned and funded by industry but also financed by the government to ensure social inclusion. Instead, they are currently populated with representatives from industry associations and no representation from worker unions. Their funding comes through the NSDC for which there is no oversight.

The committee would like the number of SSCs whittled down. It has identified 21 critical sectors which have been further broken down into sub-sectors. The SSCs should migrate to the states and fulfil their skilling needs especially in agriculture.

Third, the NSDC, which finances new vocational training centres, depends heavily on government funding. Several training institutes it has lent money to haven’t paid back. The report recommends the NSDC be given the status of a Non Banking Financial Company (NBFC) under the Reserve Bank of India. Instead of financing sundry institutes it could help modernise the ITIs.

Fourth, the report recommends that the NSDA become the ‘sole regulatory authority for skill development in the country’. So it’s important for it to be headed by a person of unimpeachable reputation. The SSCs could be formed by this regulatory body.

The biggest flaw in the system, says the report, is that “we have not been able to ensure quality of training to international standards”.

The vocational education and skilling system is plagued by low standards. Testing and certification don’t meet global benchmarks. There is a poorly staffed National Skill Qualification Committee which produces complicated standards and qualification requirements which are hard to understand and full of jargon.

The report has recommended an independent National Board for Assessment and Certification manned by experts from industry, training and education. “This is the single most important step to ensure quality and credibility of the whole VET system,” says the report. There should be one agency providing certification.

To finance vocational education and training, the committee recommends that industry pay a Reimbursable Industry Contribution (RIC). The amount would work out to two percent of the firm’s payroll. Funds can be routed through the industry-specific SSC or NFDF. Students can be trained in-house or sent to vocational training centres.

The RIC would apply to all registered large, medium and small, private and public enterprises which employ 10 or more workers. Twenty percent of funds would be set apart to train people from the unorganised sector.

The report can be downloaded fromwww.skilldevelopment.gov.in/report-ssc.html