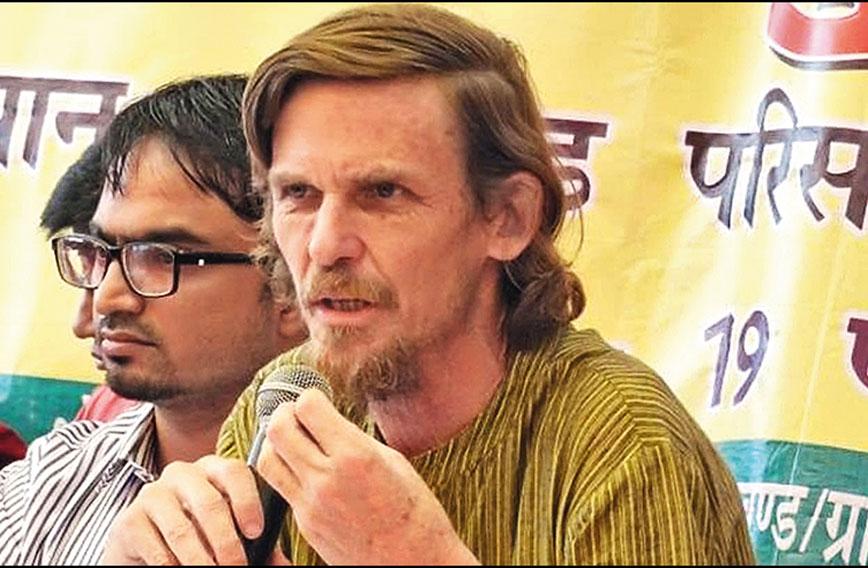 Jean Dreze: 'The Union government has never retracted its policy of making Aadhaar compulsory in the PDS'

In the past two years starvation deaths are being consistently reported from Jharkhand. Activists who went to investigate found that it was people who were very poor and not being given their rations who lost their lives. They just had no food — in a country where there is no shortage of food!

The major reason why people were not getting their rations was Aadhaar. It has been made mandatory by the central government for getting rations. The poor depend on inexpensive food from ration shops and they are being turned away because either their Aadhaar has not been linked to their ration card or their fingerprints do not match. Or connectivity is very poor.

And all this is not the fault of the people but the government. Similarly, a Direct Benefit Transfer (DBT) scheme of the government in Nagri block of Jharkhand has people asking for a return to the old system of ration cards. For the elderly, things are even worse. Pensions are now linked to Aadhaar. There are old people running back and forth to banks because pensions are delayed — in one case for two years — or even transferred into someone else’s account. So they do not have money to buy food.

Right to Food campaigners protested outside Jharkhand Bhavan in Delhi on July  13 against such starvation deaths and lynching. They demanded delinking of Aadhaar from all public services, withdrawal of DBT, a grievance redressal system, and implementation of all the provisions of the National Food Security law.

In an interview with Civil Society, economist and activist Jean Dreze provides insight into these concerns and developments on the ground in Jharkhand.

Is there any estimate of how many people have died of starvation in Jharkhand since the Aadhaar card began to be used for receiving rations?

Starvation deaths are not easy to define and counting them would be difficult even if we had all the relevant information. What we do know is that a dozen hunger-related deaths have been reported in Jharkhand since Santoshi Kumari, a young Ghasi girl, died of starvation last September. Most of them have been carefully investigated and I don’t think there is any doubt that prolonged hunger played a part in most cases.

Out of 12 reported hunger deaths, at least seven were related in one way or another to Aadhaar. In Santoshi Kumari’s case, for instance, the family’s ration card had been cancelled for lack of linkage with Aadhaar. Other Aadhaar-related factors include pensions being discontinued or diverted due to faulty Aadhaar linkage, and biometric failures at the ration shop.

The Union government did announce that Aadhaar authentication is not compulsory for securing rations. Another state minister said that any form of verification like a voter ID card would do. Why is the government’s order not being followed by ration shop owners?

The Union government has never retracted its policy of making Aadhaar compulsory in the public distribution system (PDS). The only qualification, under the Aadhaar Act, is that if you don’t have Aadhaar then as long as you apply for enrolment you are entitled to an alternative means of identification in the interim. So, the bottom line is the same: no rations without Aadhaar, at least not beyond the deadline, which varies from state to state. In Jharkhand, the deadline is already over.

Aside from linkage of ration cards with Aadhaar, the Union government is trying hard to impose Aadhaar-based biometric authentication (ABBA) on the PDS. A few months ago, the food ministry did order the states to ensure that PDS cardholders who are unable to pass the biometric test receive rations using an exemption register. A recent verification of exemption registers in Ranchi district, however, found that none of the sample ration shops maintained such registers.

Has Aadhaar actually ended up expanding the scope for corruption in the PDS? Where does the ration which is not given to the people go?

I don’t think that Aadhaar necessarily leads to more corruption in the PDS, but it can certainly happen. It did happen in Jharkhand, at least initially. One reason is that when cardholders failed the biometric test, their rations were appropriated by the PDS dealer.

Closing stocks were meant to be adjusted against the next month’s allocation, but that did not happen for a long time. Another possible reason is that biometric authentication leads to a large increase in distribution time, because of connectivity problems and so on. When dealers spend, say, two weeks distributing rations instead of three days, they naturally want to get something for it. So they look for new ways to cheat.

Has the government acted against ration owners who don’t give rations due to non-authentication of Aadhaar? Is there any grievance redressal mechanism in the state which people can seek help from?

I am not aware of any instance in Jharkhand of a dealer being penalised for failing to give rations to someone who is unable to pass the biometric test. I doubt very much that this ever happened.

Grievance redressal mechanisms tend to be very weak. In Jharkhand, a lot of the Aadhaar-related work, such as linking ration cards with Aadhaar, is palmed off to PDS dealers for lack of departmental staff. This puts people at the mercy of the local dealer. In other words, it reinforces the real root of corruption, which is the power imbalance between cardholders and dealers. Independent assistance facilities, such as the district grievance redressal officer, are very difficult to reach for most people.

Considering that malnutrition, especially among women and children, is extremely high in Jharkhand, is the state implementing any aspect of the food security law? Do ration shops give pulses and oil, for instance?

By and large, Jharkhand is complying with the National Food Security Act (NFSA) as far as the PDS is concerned, except that many eligible persons are still excluded. The Act, however, does not prescribe distribution of pulses and oil. Some states do it of their own initiative, but not Jharkhand. 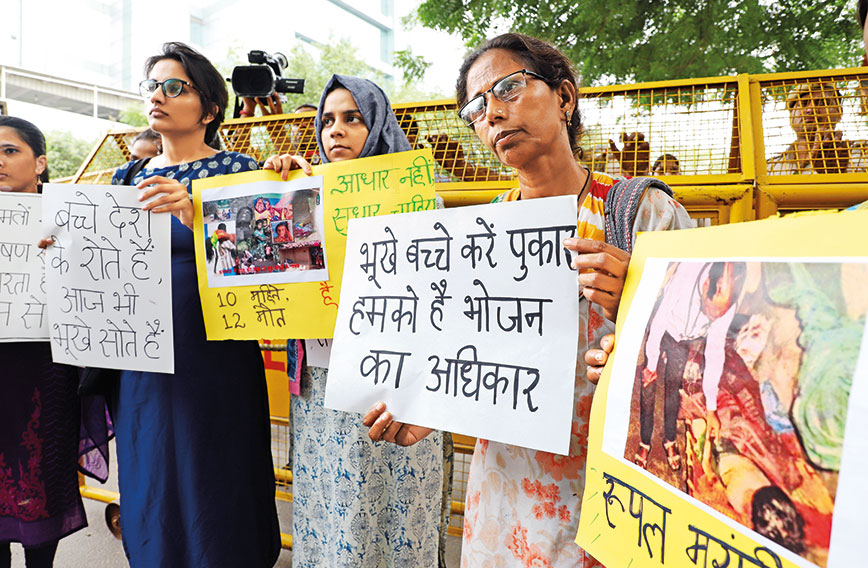 A Right to Food protest in Delhi

NFSA provisions relating to midday meals and the Integrated Child Development Services (ICDS) are also being implemented in Jharkhand. In fact, Jharkhand is now serving eggs in both schools and anganwadis, a real step forward in a state where child under-nutrition levels are so high.

Maternity entitlements, however, are being violated in Jharkhand and for that matter across the country. Under the Act, all pregnant women are entitled to maternity benefits of Rs 6,000 per child. After dilly-dallying for five years, the central government finally launched a national maternity benefit scheme this year, the Pradhan Mantri Matru Vandana Yojana (PMMVY). Under the PMMVY, however, maternity benefits are restricted to the first living child and reduced to Rs 5,000 per child. This is a flagrant violation of the Act. Further, the application procedure is cumbersome, and of course, Aadhaar is compulsory.

A survey done recently in Jharkhand showed that an overwhelming number of people in villages preferred the old system of ration cards. Should  the old system be revived?

That survey pertained to the so-called ‘DBT for food subsidy’ experiment in Nagri block. The Nagri experiment is even worse than Aadhaar-based biometric authentication. Instead of getting rice at Rs 1 per kg at the ration shop, PDS cardholders in Nagri receive money in their bank account, so that they can buy rice at the ration shop at Rs 32 per kg.

Many of them have to make three expensive and time-consuming trips to collect their rations: first to the bank, to check whether the money has arrived; then to the Pragya Kendra (business correspondent), to collect the cash; then to the ration shop. Biometric authentication applies at the Pragya Kendra and the ration shop. The transaction costs are huge and the entire system is a monumental mess. The survey, completed in February by student volunteers, showed that 97 percent of respondents were opposed to it and wanted the old system back.

The Jharkhand government, however, questioned the survey and decided to conduct its own social audit of the Nagri experiment. The findings were almost exactly the same, including the proportion of respondents who oppose the experiment — 97 percent again!

In addition, all but two gram sabhas in Nagri block passed resolutions opposing DBT and asking for a return to the old system of subsidised rice. A third set of evaluations, by Microsave, also came to the conclusion that the Nagri experiment should be discontinued. But this is yet to happen and meanwhile many families in Nagri continue to be deprived of their food rations, in violation of the law.

How has Chhattisgarh, which had a fairly sound PDS, handled Aadhaar?

To the best of my knowledge, compulsory biometric authentication is yet to be introduced in Chhattisgarh. But the central government is determined to impose ABBA on the PDS across the country, and it is only a matter of time until Chhattisgarh caves in.

Should Aadhaar by law be removed as a system of accessing rations? After all, it does not identify the beneficiary since fingerprint authentication often fails.

In my view, ABBA does not serve any purpose in the PDS. It is particularly inappropriate in states like Jharkhand where connectivity is very poor. There are simpler and more reliable alternatives, such as smart cards. In fact, smart cards have been used with good effect in states like Himachal Pradesh and Tamil Nadu. There is no need for a law to remove ABBA from the PDS; the central government can do it any day.

Note: The Jharkhand government recently announced the discontinuation of the Nagri experiment from next month (September 2018) onwards.