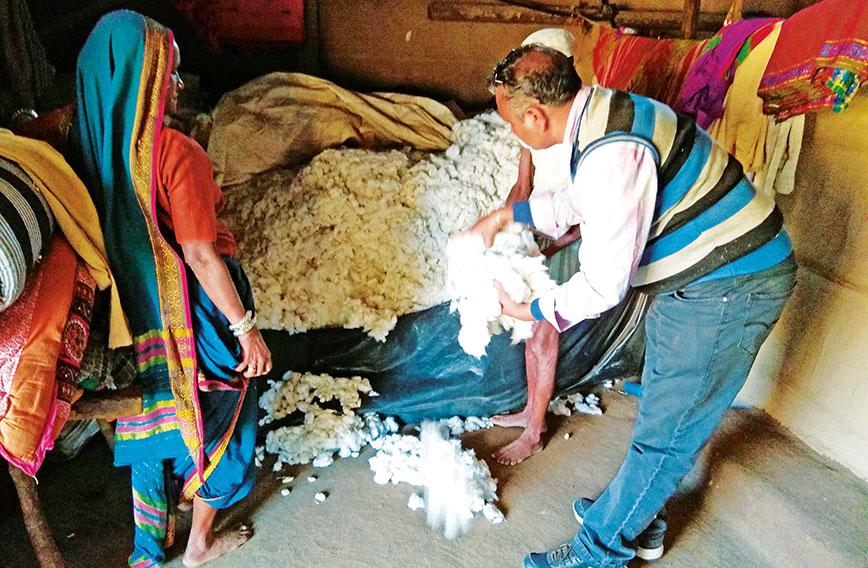 The cotton goes through a quality check

In 2015, after growing Bt cotton for 15 years, around 7,000 Bhil, Bhilala, Korku and Gond tribal farmers of the Nimar region of Madhya Pradesh switched to organic farming. Every year they find their cotton yields improving along with their income.

When the Aga Khan Rural Support Programme (AKRSP) stepped into Niwali block of Barwani district in Nimar region with its development package in 2006, cotton farming had become risky with extensive use of chemical fertilisers and pesticides. Farmers were not earning enough from their harvests, debt was increasing and the health of the farmers and their families was deteriorating.

The Aga Khan Foundation partnered AKRSP in 2015 to promote non-Bt cotton and use of organic fertilisers like amrit pani, bio pest repellants and compost manure.

Kesarimal, 45, of Chatli village, who switched to organic farming on his four acres, recalls that 10 years ago he fell ill after spraying his cotton crop with chemical fertilisers. Other farmers and their families too suffered breathing problems. Mukesh, from the adjoining Kusumiya village, says asthma and TB cases increased. He contracted chikungunya and his hands itched. The fields too suffered. The soil turned so hard that it could not be tilled by bulls.

It has taken Kesarimal’s fields three years to completely convert to organic farming, enabling him to get premier rates for organic cotton. Though every year after detoxification yields improve, it is only in the third year that the full benefits of organic farming are reaped, says Iqbal Baig, the AKRSP representative. This year Kesarimal has got 15 percent more money for his organic cotton crop and he says proudly, “It is the best cotton in the market.”

Some 1,500 farmers of 39 villages of Niwali block have been registered under three Internal Control Systems, each with 500 farmers, and can be digitally tracked by the government’s Agricultural &  Processed Food Export Development Authority (APEDA). All do organic farming of cotton and other crops and, as registered members of APEDA, are entitled to organic farming rates.

There are about 20 organic cotton dealers in the Nimar region. Farmers keep their cotton at home and buyers visit their homes and test the cotton to verify its organic nature. In their enthusiasm to get a better price, farmers who have not been properly counselled could spray water on the cotton to make it heavier. However, buyers are sharp and the farmer could end up a loser. In the Nimar region cotton is grown in the kharif season (July to October) and the cotton is picked three times. The quality of the first picking is the best, says Kesarimal.

Farmers from non-organic farming areas have been visiting Kesarimal to understand the conversion so that they can replicate it in their fields. He explains how intercropping of cotton with marigold, moong, tur and bhindi attracts insects, leaving the main crop, cotton, pest-free. Since the leaves of the cotton plant curl up, looking distinctly unhealthy if mosquitoes sit on them, plastic with gum is used as a sticky trap.

The cultivation of organic cotton is going hand-in-hand with the making of homemade fertilisers and insecticides and women play an important role in preparing the biocides.

mong the popular homegrown fertilisers is soyabean tonic. It is a concoction of jaggery, ground drumstick leaves, mahua, and two litres of cow urine.  Properly stirred, it is kept for eight to 10 days till it’s ready for sprinkling on the crops with spray pumps. There is also a five-leaf manure made by grinding leaves of pumpkin, drumstick, neem, dhatura and akaab and mixing the paste into 10 litres cow's urine and 10 kg of fresh cow dung. 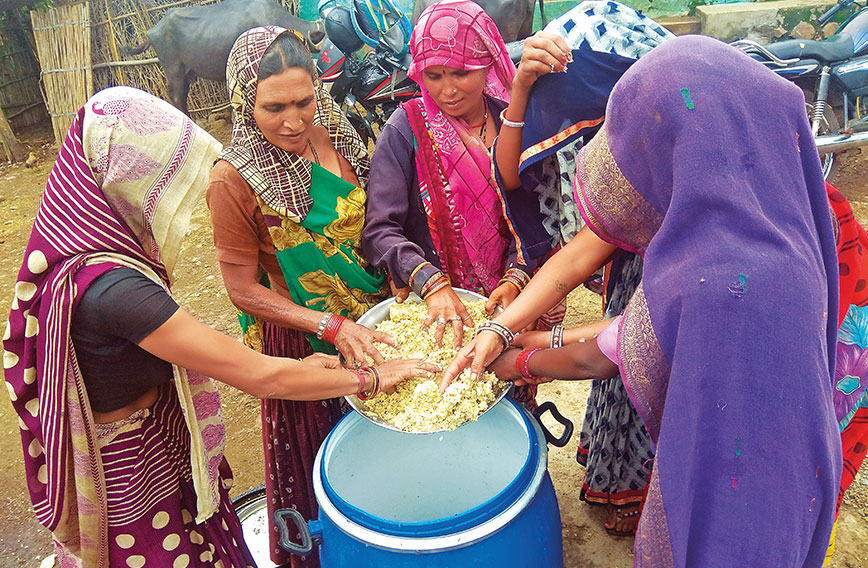 Kept in big drums for 60 days, the mixture is stirred repeatedly till it becomes manure. It also acts as an insecticide for all crops. Kesarimal says proudly that he and his wife have all the ingredients for making leaf manure on their four acres.  Compost is also made over three months, using leaf litter from the fields and cow urine in layers.

At Kusumiya village, in addition to the soyabean tonic and the five-leaf manure, a blend of onion, garlic and chillies makes a potent pest control tonic. Bhupinder, 25, one of the younger farmers, who looks after 6.5 acres, says with pride that he keeps three cows and two buffaloes for milk, butter and cow's urine. Since a litre of cow's urine costs anything from Rs 20 to Rs40 in the market in the organic cotton growing areas of Barwani, farmers collect it from their cows.

In addition to cow's urine, cow horns are being used to restore soil vitality. The use of cow horn manure or fermented cow dung is the first step farmers take when they switch to organic farming. The cow horns are filled with the dung of a well-fed lactating cow to ensure there is calcium in the dung and then buried in winter, the open end facing downwards, in a pit 16 to 18 inches deep. It is covered with soil that has been enriched with good quality compost. Arjun of AKRSP, who works closely with farmers, says in the winter months the soil has growth energies which are absorbed into the dung through the horn. The preparation is ready in four months when it turns into humus and is stored in glass containers.

The making of cow dung manure is one of the many things taught at the farm field schools found in many villages of Niwali block, attended by women and men. With colourful information posters, vibrant discussions are held here on organic farming, preparing of various bio pesticides and prevailing market prices. With the new range of locally brewed pesticides, only harmful insects are destroyed and there has been a return of earthworms — vital for soil rejuvenation — says Bhupinder. AKRSP representatives make it a point to attend the meeting held on a fixed day every month.

With homegrown biocides there is a saving of Rs 10,000 to Rs 15,000 on fertilisers and pesticides on five acres, says Mukesh. Cotton yields are increasing. As against 15 quintals earlier, last year he got 17 quintals and the price of organic cotton is higher. “It’s a win-win situation and our soil too has improved,” he says. Gyan Singh, who grows organic wheat, says it sells at Rs 2,500 a quintal as against Rs 1,800 for normal wheat. With improved soil fertility almost all farmers have started growing organic vegetables and maize.

Efforts are now on for branding the organic cotton of the famers of Niwali block who have formed the Satya Sanathan Kisan Samooh. Farmers’ Interest Groups have grown and have linkages with the Farmers’ Producers Company at Niwali which ensures a good price for crops. Of the four women entrepreneurs of Niwali, two are board directors of the company.