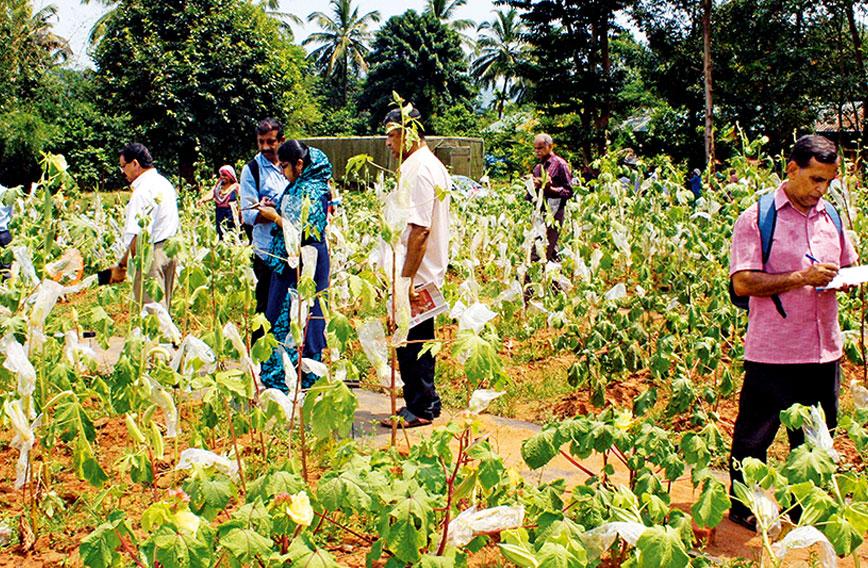 Farmers amid the okra plants in NBPGR in Thrissur

A wealth of rare seeds for farmers in Thrissur

On September 28 an interested group of farmers was escorted to an unusual field at the National Bureau of Plant Genetic Resources (NBPGR) in Thrissur. There they saw an amazing 600 accessions of okra or bhindi growing in the field with some being rare ones. The farmers were told they could ask for any variety they wanted. Once the seeds were ready they could come and collect them for free.

Earlier, the NBPGR wasn’t opening its doors to farmers and allowing them to select seeds from its vast and rare collection. Thanks to a change in policy, farmers can now acquire rare seeds that aren’t available in the open market.

Dr John Joseph, principal scientist of NBPGR in Thrissur, took the initiative to bring about this important change in policy. “Our contention is that it is better to take farmers into confidence for the objective of biodiversity conservation,” he explains. “If we don’t do that, many of our old and promising varieties of vegetables and other crops will disappear in today’s market-based rat-race.”

His recommendation was accepted by NBPGR’s top leadership. Thanks to this change in policy, NBPGR in Thrissur has been convening an ‘okra field day’ for the past three years. For the first two years, it wasn’t a well-known event. This year, it was posted on social media and attracted more attention.

Once farmers have made their choice, the pods are dried, the seeds are collected and small sample packets handed over to them based on availability and selection. But before that, the institute mandatorily keeps some seeds for conservation. 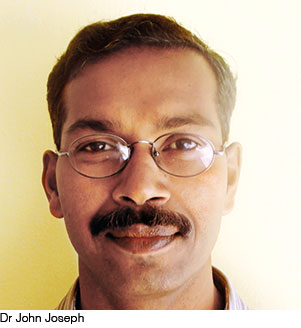 The NBPGR has 10 regional centres, each in India’s different agro-ecological zones, with its headquarters at Delhi. It has a vast and diverse collection of vegetable, medicinal and other crops and their wild relatives. Seeds of every crop are stored in cold rooms in two locations, with one serving as a fallback. Another set of all these seeds are stored for a long time in low temperature at the NBPGR’s New Delhi headquarters.

To retain the viability of seeds, they have to be sown in soil at least once in two decades. But to ensure that their viability is not lost at any cost, this process is undertaken once in 12 years. Out of all the seeds thus produced, NBPGR compulsorily acquires a huge quantity to re-store them and also sends them to its New Delhi headquarters. If there are any seeds left, they can be distributed.

But the practice, till recently, was to give excess seeds only to government agencies like universities and particular farms, if they requested them. The NBPGR’s policy didn’t permit it to make these seeds available to farmers.

Among vegetable crops, farmers tend to retain only commercially successful varieties. This emphasis on a few chosen varieties eventually reduces local biodiversity. This is one major reason biodiversity is slowly being lost in all cultivated crops. Several good varieties begin to become extinct.

Take, for example, okra. Pusa sawani, a dark green and short variety, released by ICAR in 1969, has overtaken all other varieties in the country. Today, when you travel to cities, whether in north India or south India, you will see a profusion of this variety in markets.

Interested farmers need to send an intimation of their participation and register themselves. After a briefing, they are taken to the fields. Eight plants of each accession are generally grown. The names of every accession are printed on a nearby board. Farmers go round, select the accessions they want and submit the indent in writing.

Once their seeds are ready, NBPGR informs them by phone, mail or WhatsApp. The NBPGR has a WhatsApp group of progressive farmers who are interested in newer and promising varieties. Farmers who had requested seeds have to come and collect the seed packets from the centre themselves.

Farmers select according to the appearance of the crop. But it’s a unique opportunity for them to grow new varieties and evaluate each according to quantity of yield, taste, susceptibility to or resistance to diseases like yellow mosaic.

“A variety that has no ridge is considered very tasty and is much sought after now. Even in the market, it is said to command a higher price. Mappas curry made with this bhindi in coconut milk, they say, is really outstanding,” says Dr Joseph.

This centre organised a similar field day for rice and little millets last year. But the response to millets was lukewarm. This year the NBPGR plans to do another one on little millets. It is uncertain whether other centres are also inviting farmers to take a look at their seed varieties and select what they like.

In the pipeline is a ‘yard-long bean’ or vegetable cowpea field day for farmers. Called payar in Malayalam and alasande in Kannada, this bean variety is even more popular than bhindi. The NBPGR has a collection of more than 100 yard-long beans which it has collected by travelling all over the country.

All these yard-long beans are longer than 20 inches. One particular collection is 75 to 80 inches long. “We have evaluated about 20 collections that are superior to released varieties like ‘Arka Mangala’ and ‘Geethika’,” says Dr Joseph.

“We have very good relations with farmers. Some of them are regular visitors. If they come to Thrissur, they don’t return without visiting our centre,” says Dr Joseph. Some farmers offer the NBPGR their own rare varieties of planting materials too. A vegetable cowpea thus provided by Abdul Khader, a retired policeman from Palakkad, is quite promising and has been named Velamthavalam.

The NBPGR in Thrissur has an impressive collection. It has 160 collections of amaranthus, 65 of salad cucumber, 23 of ash gourd, 85 of pumpkin, 265 of bitter gourd, 65 of snake gourd and eight of ivy gourd.

“If we are certain that the farmers who approach us won’t misuse our seeds, we do provide them small quantities of rare varieties, subject to availability,” Dr Joseph adds.